Okay, so this might take a little explaining. Lightning Returns: Final Fantasy XIII is a sequel to Final Fantasy XIII-2, featuring the central protagonist of the original Final Fantasy XIII, but set roughly 500 years after the previous games. During that extended break, our titular heroine has been sleeping in a crystalline form, awakening only to act as God’s chosen saviour in the last six to thirteen days before the world of Final Fantasy XIII ends. This involves saving the souls of key inhabitants, all seemingly immortal, and all familiar faces from FFXIII and FFXIII-2. If she does so, she might get to resurrect her sister Serah, who Lightning was trying to save in FFXIII, and who spent FFXII-2 trying to repay the favour. And while there’s less of the fal’Cie, l’Cie stuff that made FFXIII a bit perplexing, a whole new mythology has been bundled on on top.

If it all sounds a bit confusing, trust us: it’s only going to get more so. In a series known for unnecessarily convoluted plots, the Final Fantasy XIII saga has set a whole new bafflement benchmark. 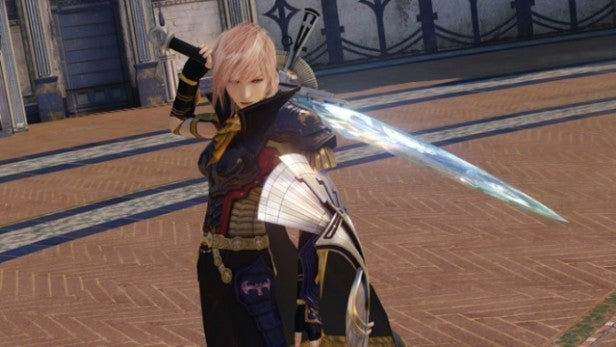 But then Lightning Returns is hardly a straightforward expansion. Out go the party mechanics of Final Fantasy XIII, the whole Paradigm combat system and the Crystarium character development structure (don’t worry if these things are new to you, it would take several pages to explain them), In comes a whole new set of systems. Lightning now explores and battles on her own, with a little support from FFXIII’s Hope, who’s holding the fort for God on the his mystic space Ark (we’re not making this up).

Some of the combat mechanics remain. Fighting still takes place in real time, and Lightning has a set amount of energy for attacks and blocks, defined by an ‘Active Time Battle bar’ that goes down a notch with every move. By building up blows and focusing on attacks that her target is vulnerable to, she can knock them into a staggered state, at which point they’re ready for a thrashing. 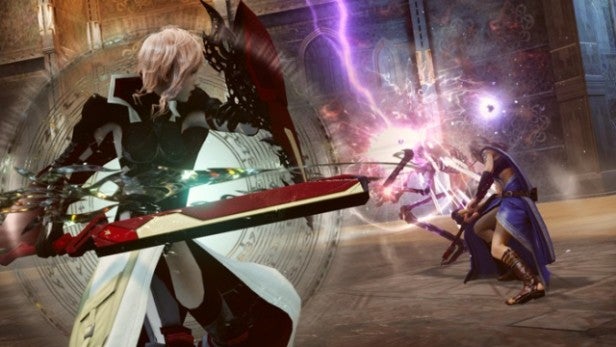 But here’s where things change. Lightning’s ATB bar will fill up slowly without any intervention, but the key to winning battles is changing costumes, which instantly recharges the bar. It’s a system broadly similar to Final Fantasy X-2’s Dressphere system, where different sets of clothes – here called schemata – enable and boost different styles of attack.

You can customise your schemata with different costumes, accessories and physical and magical attacks, and the strategy lies in building a balanced set, and in knowing when to switch between them. You need to be sure you have offensive spells to build the stagger meter, but also strong attacks to rush out when your foes are reeling. Specific foes also respond more or less to specific attacks, so it’s a question of whether to opt for all-rounders or build a set designed to deal with the enemies close at hand. 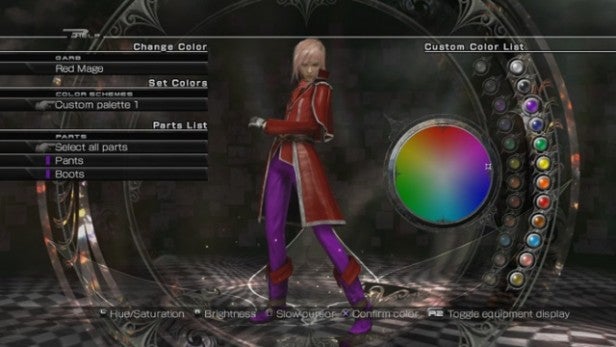 Lightning Returns then throws in two extra twists. Firstly, unlike most other Final Fantasy heroes, Lighting no longer levels up as you fight. Instead, you power her up by collecting new costumes, and by combining and boosting your different abilities. Secondly, you’re working to a time limit, and time is very much a factor in the game. You only have a fixed number of days to save all those souls, and while saving souls – especially the major ones – will earn you another day or two, you still need to make the most of every hour. To make things harder, certain gates or areas will only open up during specific hours, and some characters and events may only be available at certain times.

In short, Final Fantasy plays like a peculiar mix of Final Fantasy XIII, Final Fantasy X-2 and Shenmue, where you might have to play through the whole shebang again if you mess things up on your first playthrough. You can’t accuse Square-Enix of rehashing old ideas or concepts. In fact, Lightning Returns has a distinctly experimental vibe.

Yet it also has a problem. The original Final Fantasy XIII was dull and overly linear, only picking up at around the eight hour mark, before which you got dragged from one encounter to the next lengthy cut-scene to the next encounter. Part 2 was a lighter, more inventive and more enjoyable game, but still quite restrictive in the layout of the worlds and dungeons.

Lighting Returns is much, much more open, making several large locations accessible early on, and giving you scope to roam around open countryside, ruins, rock and desert or urban sprawl. This is great – it’s high time Final Fantasy went more open world. Unfortunately, this openness has its downside too. 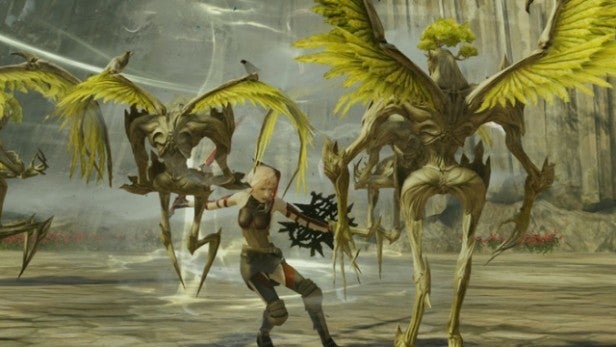 Sometimes Lightning Returns struggles to make it clear where you should go and what you should do. At other times it lets you walk into situations you’re clearly not equipped for, leaving you to get pounded until you work out that it’s time you found somewhere less dangerous. Try doing so, however, when you’re surrounded by beasties who can drop you with a blow. There are signposts and hints to push you in the right direction, and Hope up in his God-mobile will barely shut up for a second, but Lightning Returns can be an oddly inaccessible game.

What’s worse, it can be boring. Sure, there are great cities to explore, areas of wilderness to conquer, but why bother when they’re full of the same, tired scenery and the same repetitive monster encounters. You can liven things up by taking additional quests, but even these seem to focus on killing 10 monsters or collecting 10 objects, then delivering them to FFXIII-II’s intensely irritating bird/human/strippergram hybrid, Chocolina. 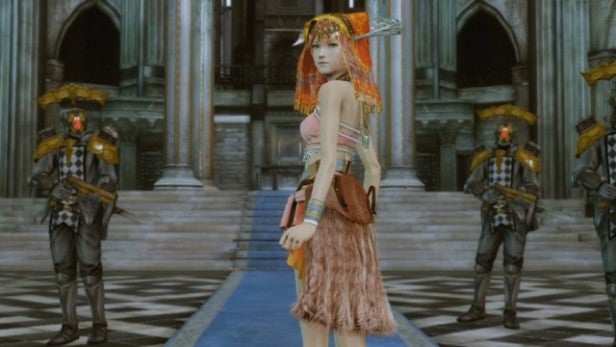 She’s far from the only irritating character. It’s hard to complain about an over-abundance of stroppy teens and slightly creepy over-sexualised character designs when that’s always been a part of Final Fantasy, but why are so many of the characters in Lighting Returns acting out some kind of adolescent angst, and why put Lightning – one of the series’ strongest heroines – in so many revealing outfits? And why make one of the most intriguing and mysterious figures in the game another stereotypical, stocking-clad teenage minx?

We understand that the costumes reflect back on Final Fantasy heritage, but it all gets a bit embarrassing at times. What’s more, the whole thing is weirdly unengaging. Lightning is an interesting character, but her very coldness makes her hard to root for. With no other heroes tagging along beside her, the story struggles to maintain its grip. 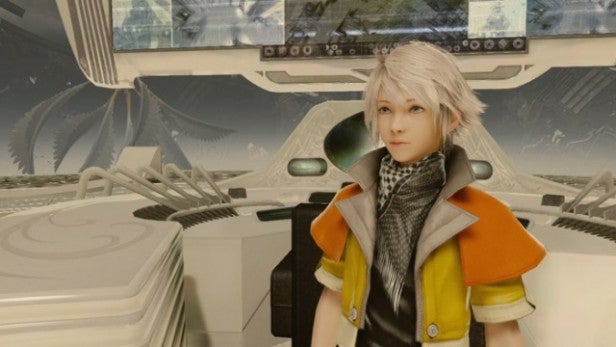 Lightning Returns even has issues on a visual level. In the cut scenes it’s often sumptuous, revelling in the kind of ornate style and stunning detail that the series is known and loved for. The battle scenes can also look epic, and Square-Enix’s gift for creating fabulous beasts and extravagant spells and weapons has not deserted it. Areas of the world, particularly in the grasslands and the desert, are atmospheric and sweepingly beautiful. Yet some of the scenery is painfully flat, with ugly textures, while many of the bystanders and minor monsters could have sneaked out from a PS2 game. Throw in some horrendous frame rates in sections of the game, and it all feels a little under-polished. 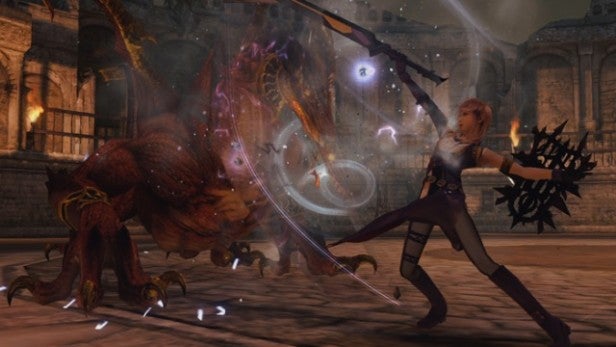 In the end, there will likely be two takes on Lighting Returns. If you’re a hardcore Final Fantasy fan and you’ve enjoyed the FFXIII saga so far, then you’ll still get a lot out of this concluding chapter. It’s as vast, complex and as full of returning characters and background lore as you could wish for. With its call-backs to FFX-2 and other classics in the series, Lighting Returns has been designed with you in mind. If, however, you struggled with FFXIII and its sequel, there’s really nothing that you need to see here. Maybe Square-Enix is doing a good job of keeping the hardcore fans happy, but it’s doing nothing to put Final Fantasy back on the mainstream gaming map.

Lightning Returns earns high marks for fan service, and if you had the patience for the two preceding chapters then the final Final Fantasy XIII may go down well. Yet for many of us this is a disappointing conclusion to a disappointing saga, still too opaque and unenengaging to keep you locked in for the duration. There are other Japanese RPGs out there working harder to innovate, and to capture hearts and minds. Final Fantasy needs to rediscover itself if it’s to join them.