The spec sheet of Cleer Enduro ANC is ambitious, but they deliver well on nearly all fronts. Sound quality is very good at times, noise cancellation is solid, and the battery life is epic. Design and comfort are its weakest aspects, but for £149 these headphones acquit themselves well.

US audio brand Cleer is one we’ve kept an eye on since it first landed in the UK a few years back. The Enduro ANC are one of their latest efforts: an affordable ANC pair with long-lasting battery life.

That stamina is around 60 hours, beating the Urbanista Miami’s 40 hours. The Enduro ANC aren’t even Cleer’s longest-lasting pair – the Enduro 100 hit a century of battery life.

At £149, the Enduro ANC are propositioned towards the value end for ANC headphones. Noise cancellation at this price can often be a shadow of pricier efforts, but after giving these headphones a shakedown, there are reasons to believe the Enduro ANC buck that trend.

When it comes to looks, Cleer undoubtedly has a particular ‘taste’, and that’s assuredly a good thing. In a market where headphones can often be indistinguishable from one another, the Cleer aesthetic stands out.

The look is dialled down from the Flow II in some respects. The decal design on the earcup is more restrained, it’s slimmer in profile, weighs less and isn’t as bulky – all of which contributes to a form that’s more accommodating to wear than the Flow II was.

But some issues remain, particularly in the nature of the construction. While the use of hard plastic brings rigidness, I could hear creaks in the frame, which is never particularly reassuring. They’re not the most comfortable to wear over prolonged use either; the plastic casing has a tendency to bite into the earpads and pinch around my ears.

The buttons are a bit plasticky but are easy to locate, responsive and offer tactility, too. It’s easy to distinguish between each one (volume, multi-function and ANC toggle), a design aspect some brands can surprisingly fumble.

The multi-function button niftily covers all playback options (play, pause, skips forward and backwards), while a double-tap on the ANC button brings up a digital assistant. A long press (about a couple of seconds) on that same button enters Conversation mode, which is Cleer’s version of Sony’s Quick Attention mode, pausing music and letting sound in so you can have a chat.

Available in white and navy blue (which I rather like), the Enduro ANC are an elegant and trendy-looking pair overall. There’s no hard carry case, but there’s a soft drawstring pouch with a USB-C/USB-A charging cable, USB-C to 3.5mm cable and airplane adapter tucked in. There’s no USB-C cable to connect straight to a mobile device that lacks a 3.5mm jack, but I can’t think of a full-sized pair of of the top of my head that carry such a cable anyway.

The Enduro ANC’s headline feature is its mammoth battery life. It’s the combination of ANC and up to sixty (60!) hours of battery that sets eyebrows raising and heads tilting.

What witchcraft Cleer has summoned to achieve this is made explicit by the inclusion of Qualcomm’s QCC5124 chipset. The amount of power it uses is extremely low, allowing it to manage power better to deliver what is – currently – a class-leading result at any price for any ANC pair of headphones. However, note that the more you switch between modes and listen at higher volumes, consumption of the battery will be a bit quicker. Quick charging – if you ever need it – is 10 minutes for two more hours (three hours for a full charge).

The presence of active noise cancellation is becoming less of a downside and more of an attraction at this price. So you don’t need to break open the piggy bank to fund a pair of AirPods Max, Bose Noise Cancelling Headphones 700 or Sony WH-1000XM4, unless what you seek is the best noise-cancelling performance on the market.

If you settle for the Enduro ANC’s noise cancellation then you’re getting a solid performance. Cleer claims it reduces noises by around 25dB, and it will clean up a fair amount – in particular, low-frequency noises – to make for a smoother walk or commute. I found it struggled with nearby voices, which made their presence felt above the volume of audio.

The noise-cancelling subdues rather than fully diminishes sounds – the size of vehicles are made smaller, the tone more of ‘whoosh’ as they go by. Journeys on trains are less intrusive, and wearing them inside buildings – Waterloo, for example – does calm things down. It isn’t as thorough as the top pairs, but it is effective.

A press on the noise-cancelling button flits between different modes: ANC, Ambient Sound and Off. Ambient Sound is transparent enough to hear what’s around you without it becoming too artificial, although it produces a hiss that becomes slightly louder as the ambient settings are tweaked to filter through more sound.

That tweaking is done through the Cleer+ companion app (Android / iOS), and that offers 10 levels of Ambient Sound adjustment, the opportunity to play with the headphones’ EQ settings (64Hz – 8kHz), playback controls, firmware updates and an Auto Power-Off feature. Simple and intuitive, I’ve got few qualms about its functionality. It also looks slick with its ‘dark mode’ aesthetic.

A roundup of the rest of the features sees Bluetooth 5.0 included (naturally) with, SBC, aptX and aptX Adaptive, which is particularly interesting at this end of the market given the aptX’s adaptive compatibility with higher-quality audio. Wireless connectivity has fared pretty well: I’ve experienced no drop-outs or stutters when walking through potentially busy areas such as Waterloo. Google Fast Pair 2.0 is present if you have a compatible Android smartphone.

Cleer uses its proprietary Ironless Driver technology for the majority of its headphones (here in its 40mm form). I rather enjoyed the tech in the Flow II since the Ironless Drivers produce a clean, detailed sound with little to no signal distortion, and that’s much the case with the Enduro ANC.

The Ironless Driver technology does carry with it a slightly cold and brittle feel to the mid-range area. If you’re after warmth in your music then you won’t find it here. The Enduro ANC deals in neutrality, and that can be rather chilly to listen to at times.

Compared to, say, the Sony WH-H910N (now down to around £180) and the approach to vocals on lower-quality audio streams is evident by the Enduro ANC being not as smooth as the Sony. Jill Scott’s voice on Golden sounds slightly strained and her intonations aren’t as emotive as they are on the Sonys. It’s a case of Sony’s smoothness versus Cleer’s sharpness.

Listen to higher-quality tracks on Qobuz, and the Cleer fare better. The Cleers described Jorja Smith’s album Be Right Back with more deftness – it isn’t as upfront or as energetic as the Sonys – but vocals are tighter and better organised within the soundstage.

The chilly tone feels less of an issue, and higher quality tracks make more evident that the Enduro ANC sound pretty good at lower volumes. An adjustment to higher volumes brings about more energy and boosts the headphones’ sense of dynamism (effectively in Christian Scott’s The Emancipation Procrastination), while retaining clarity and detail.

The Enduro ANC sound better and more composed than the Urbanista Miami (£129) with tighter bass handling and better organisation of the soundstage in Daft Punk’s Give Life Back to Music. The piano notes in Within from the same album are detailed and tonally conveyed well. High-frequency notes may lack a semblance of bite and shine in Gogo Penguin’s Raven, but they’re defined nevertheless.

When it comes to noise cancellation and Ambient Sound modes, playback with noise cancellation definitely wins out. Audio is slightly thinner and distant with Ambient mode on and ANC fills out the sound more and produces firmer bass, too.

In light of the price, the Cleer Enduro ANC offer tremendous value. They sound better – consistently so – than cheaper alternatives. Their neutral, mature approach should win them plenty of fans. They’re slightly chilly in tone and that can affect how emotive they come across, especially with vocals. But their skill with higher-quality audio puts them over the top and above price-related rivals. The Enduro ANC are a talented pair of affordable ANC headphones from Cleer.

If you want accomplished sound at an affordable price Cheaper headphones don’t always promise the most disciplined audio, but Cleer has delivered a measured, neutral and detailed sound that’s pretty entertaining for the most part, especially with higher-quality audio.

If comfort is a priority: The hard plastic quality of the headphones adds rigidity to the design but does mean they’re not the most flexible. Creaking sounds can be heard from the chassis and the plastic on the earcups can pinch around the ear.

The spec sheet of Cleer Enduro ANC is ambitious, but they deliver well on nearly all fronts. Sound quality is very good, noise cancellation is solid, and the battery life is epic. The design and comfort levels are its weakest aspect, but for £149 these headphones acquit themselves well. 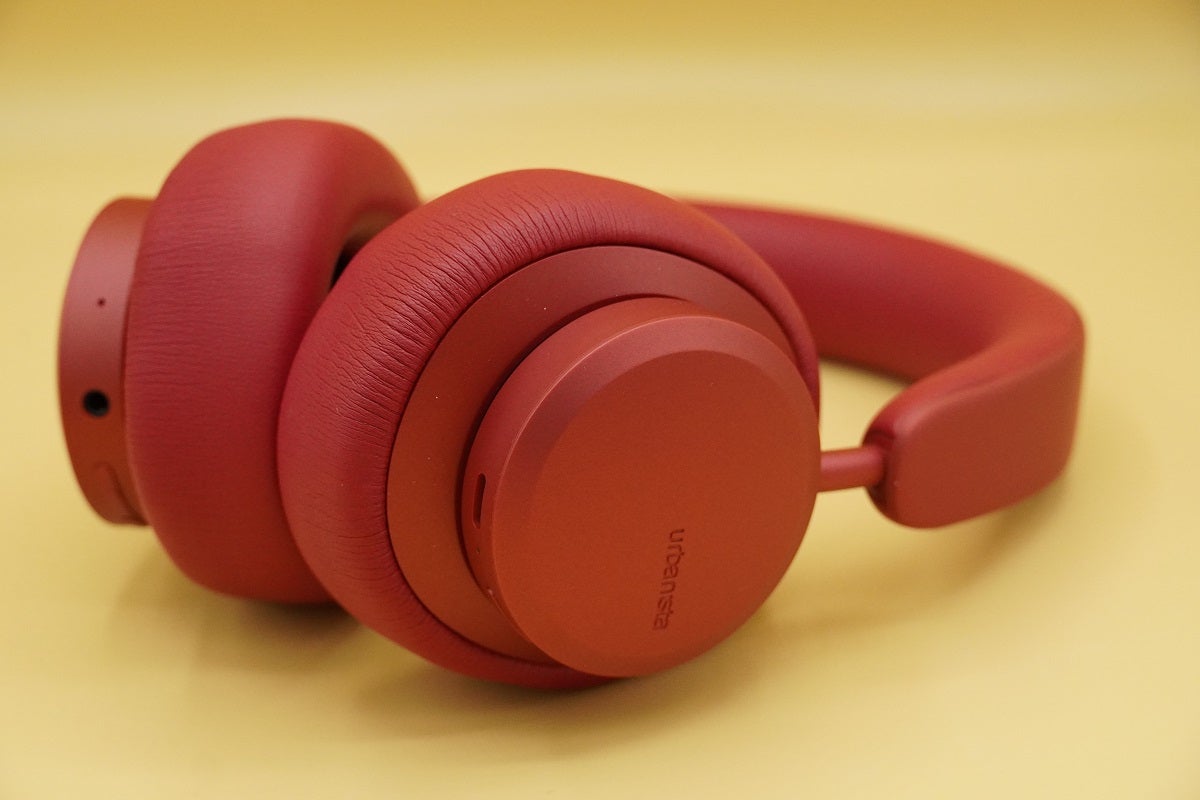 What type of noise cancellation do the Enduro ANC have?