What is the Chromecast?

When the first Chromecast came along, video streaming was still a fairly fresh concept. It was the perfect time for Google to carve itself a niche.

Everyone has a smartphone, right? So what if you can choose your content on the screen already in your hands, then ping that over to your TV? The idea took off, and the original Chromecast was a massive hit. It helped that it was a tiny device that could plug into any HDMI socket – and cost a piddly £30. The second-generation version came out towards the end of 2015, and is so good it’s still going strong.

Of course, other rivals have begun to encroach on Google’s territory – the Roku Express and the Amazon Fire TV Stick are the latest to offer crisp 1080p streaming. Neither of them are as simple to use, however. And Google still has the advantage of smart home integration, thanks to the Google Home voice assistant.

That being said, you may not need to get a Chromecast at all. Many TVs by Philips and Sony use the Android TV operating system, which means Chromecast functionality is built into the TV. Check our comprehensive guides below to see if a particular model has this operating system.

Sony TVs 2018: What you need to know before you buy Bravia

The second Chromecast has a completely reworked design, straying considerably from the ‘stick’ format of the original.

Now the device has a round chassis that connects to your TV’s HDMI port. Google has also made the system cross-platform, adding support for iOS and Windows.

This compatibility – combined with the Chromecast’s low cost – makes it a compelling alternative to the Apple TV, which costs £129. 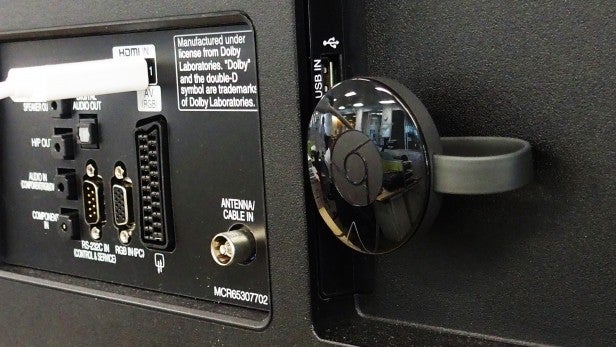 The setup process is pretty much identical to the one with the original Chromecast. Simply attach the power cable and install the Chromecast app (now named the Home app) on your smartphone, tablet or laptop.

From there you power up the app and follow the on-screen commands to connect the device to your Wi-Fi network and pair it with your device. Once this is done, you’re ready to stream.

Despite having the same setup process, the latest Chromecast runs using a completely redesigned application.

Google describes the app as a hub for all your digital content needs. It works by pulling content from all the apps installed on the device that it can stream from into a single-pane of glass interface.

In theory, this means you can view every bit of content you can watch on the Chromecast in one place, without having to individually check each app. You could see what movies are on Netflix alongside recently added TV shows on the BBC iPlayer, for example.

There is a cross-platform search function in the Home app, enabling you to hunt for specific content across your installed apps. This is one of the biggest and most important updates, moving the device from a basic streaming stick into an all-in-one entertainment hub.

It now supports a greater number of apps. For entertainment, Spotify is the biggest new addition.

The first Chromecast didn’t have the functionality to let you stream music from Spotify to your TV, which was annoying for those who didn’t have a decent Bluetooth speaker or home sound system.

Also new to the Chromecast is support for productivity applications. These include Google’s own Docs as well as third-party services such as Polaris Office.

For me, this one of the most interesting updates to the device. I can see it being adopted by small offices looking for an easy way to stream presentations to a big screen. 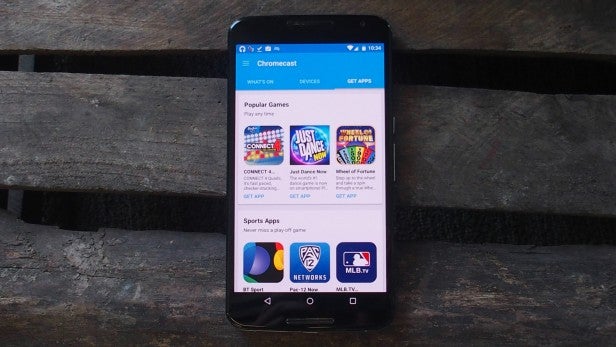 The ability to stream webpages from open Chrome tabs is another welcome addition, making it easier to stream unsupported applications – such as DeviantArt – onto TVs.

Finally, the some Android games are supported. On paper, the gaming feature is another big update that puts the Chromecast on a par with larger streaming boxes, such as the Amazon Fire TV.

Sadly, as is the case with most streaming sticks and entertainment hubs, the quality and quantity of streamable games on the Android Store is lacking. Those that are present are fairly casual – Wheel of Fortune, for example, rather than Sonic the Hedgehog.

The latest update brings integration with the Google Home. Basically, you can use your voice make Netflix start playing on your TV. It’s a little thing, but it’s cool.

Google claims the Chromecast will stream video significantly faster thanks to the addition of 5GHz Wi-Fi network support and a new ‘Fast Play’ feature.

The enhanced Wi-Fi support lets you use the newer, more stable 5GHz frequency. The old version only supports the older 2.4GHz frequency, which is why it could on occasion be a little jittery when streaming movies.

Fast Play is a key feature, designed to let the device cache shows in the background that it thinks you’re likely to watch. Google claims this functionality will let the device stream content 80% faster. Sadly, I didn’t get the opportunity to check out Google’s claim – as with the content-aggregation service, Fast Play isn’t available in the UK yet.

The updated device is slightly faster. I swapped the two devices in and out of a 40-inch Samsung TV while streaming content from Netflix, Crunchyroll and BBC iPlayer on a Nexus 6 smartphone and BT Home Hub router.

When running the two devices on the 2.4GHz frequency, content universally loaded two to five seconds faster on the newer Chromecast. I didn’t notice a massive improvement in either speed or picture quality moving onto the 5GHz frequency, although the new one maintained its lead on loading times.

Unlike the Nvidia Shield TV, the Chromecast can’t stream 4K content; it streams at a maximum 1080p resolution. 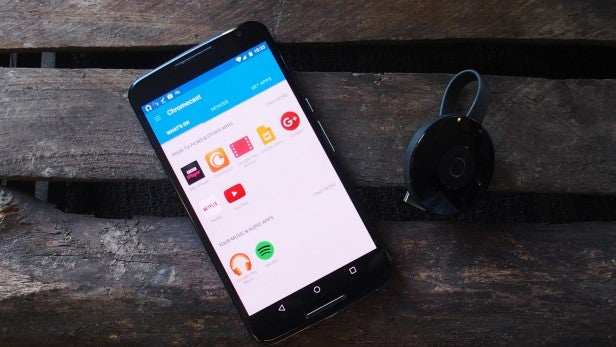 Why buy the Chromecast?

If you own a first-generation Chromecast, then you probably don’t need to upgrade. This is more a refinement than a reimagining of Google’s streaming stick. Its only notable improvements are a few under-the-hood performance upgrades and increased application support.

If you don’t own the first-generation Chromecast, however, Google’s latest streamer is definitely worth a look.

Either way, this remains one of the best value-for-money streamers on the market, offering functionality traditionally seen on entertainment boxes that are close to twice, if not three times its price.

I’d also recommend any iOS user on a budget to check this out before shelling out for an Apple TV as well.

The Chromecast is one of the best-value streaming sticks on the market, even if it doesn’t feel terribly original.