Update: sadly Google announced in January 2019, they were discontinuing the Chromecast Audio, as its focus switches to the likes of Google Home and voice control.

What is the Chromecast Audio?

The Chromecast Audio is a small music streaming device that you can plug into a speaker system or hi-fi so you can access music over Wi-Fi. It’s Google’s attempt to try and do for music what it did for video with the first-generation Chromecast. So not only can you listen to audio from the likes of Spotify and Google Play Music, but you can also play music straight from websites such as YouTube.

It costs £30, the same as the new Chromecast, and for the money you get an easy-to-set-up piece of kit that might not be an essential buy for everyone, but has the potential to be awesome with future software updates.

The Chromecast Audio looks nothing like the original Chromecast and that’s a good thing to me. Google’s adopted the same circular design as the latest Chromecast to make it look less like a USB stick. I like it. It’s small as well, athough larger than that first Chromecast, and it weighs in at a supremely light 30g. It’s not going to hog much space next to or on top of your speaker or amplifier.

You can tell the two new Chromecasts apart from the vinyl-inspired finish, which makes the Audio look like a little chunky record, complete with tiny grooves. The logo on top is supposed be a Google one, but I can’t help thinking it looks like a Beats headphone ear cup…

On the bottom and the sides is some grey plastic where you’ll find a 3.5mm jack socket, a Micro USB charging port and a reset button. When you’re all plugged in, a little notification light pops up, indicating the status of the device. For instance, a pulsing white light means you’re disconnected and a solid orange light means you’ve got some problems. 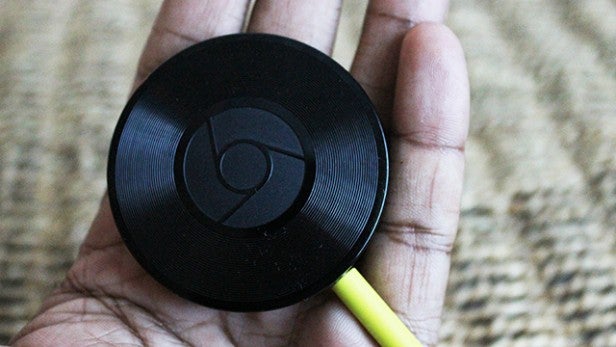 In the box you get an eye-catching luminous yellow 3.5mm-3.5mm stereo cable that’s 146mm long, as well as a 1.75m power cable which plugs into the Micro USB port on the Chromecast Audio and has to remain plugged in during use. The 3.5mm jack socket also doubles as an S/PDIF optical output, so for high-end (or older) hi-fi systems and AV setups you have the option of an optical connection or using a 3.5mm-to-RCA cable. You can pick up the RCA ones for a couple of pounds but it’ll be £5 or £6 for the digital cable. A full outline of supported cables can be found on the Chromecast Support page.

Packed into the small device is an AKM AK4430 DAC (digital-to-analogue converter) that supports Hi-Res Audio up to 24-bit/96KHz. 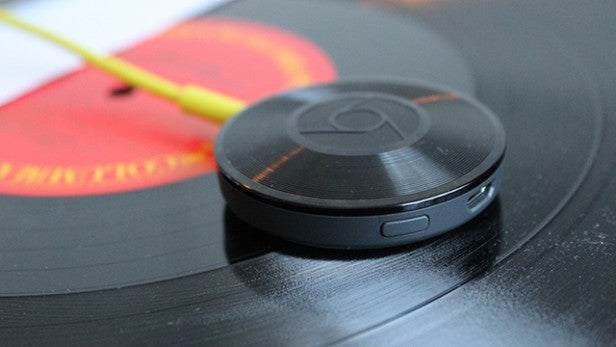 Streaming music from your device to the Chromecast Audio is done over Wi-Fi, ensuring you can stream high-quality audio without the usual Bluetooth issue of losing a connection because you’re too far away. There’s support for 2.4GHz and 5GHz network bands – something that was notably missing from the original Chromecast – so you should have no problem getting a connection.

The built-in Wi-Fi will also open up other features such as multiroom support, so you can use multiple Chromecast Audios dotted around in different rooms for a Sonos-style setup. Unfortunately that’s not available yet, but it should come via a software update through the Chromecast app.

So what speakers does the Audio work with? Well, anything that’s got some form of amplification and an audio input. You can connect it to a portable speaker, soundbar, AV receiver, hi-fi system or even your TV if it has audio inputs.

Google claims it’s really easy to set up the Chromecast Audio, so I decided to time how long it took me. There’s no instruction booklet included, just three very simple setup steps on the inside of the box. From plugging in the mains power and connecting the Chromecast Audio to a subwoofer on a 2:1 speaker system, to setting up the app on an Android phone, it took less than 10 minutes. It really is that easy.

There’s app support for all the major platforms, including Windows, but you’ll need to be running the most recent software versions. You can check compatibility on the Chromecast Audio page. I used the Galaxy Note 5 and it was all pretty straightforward. You need to download the Chromecast app from the Google Play Store and once launched it’ll automatically search for nearby Chromecasts. 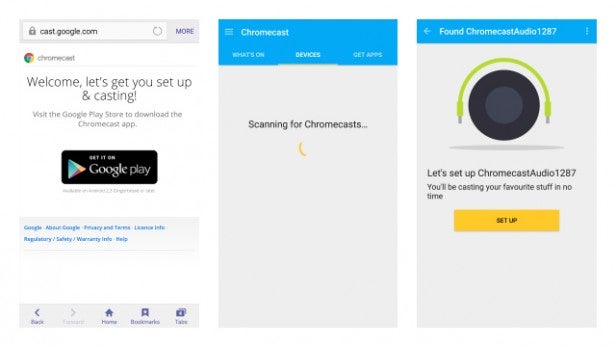 Setting up the Chromecast Audio is as painless as with the Chromecast. You’re asked to listen out for a sound to indicate that the Audio is correctly connected, then you can rename the device and enable Guest mode. This enables other users to stream music from their mobile devices without having to be connected to your Wi-Fi network. You can set up a PIN in the Devices section to control who has access. 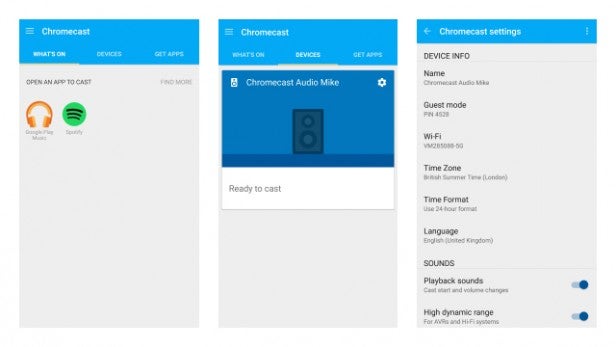 After checking for the latest updates, I was ready to go. The Chromecast app keeps things simple, pulling Cast-compatible apps through – in my case Spotify and Google Play Music. In the Devices section, you can make some pretty simple adjustments like enabling sounds for when you adjust the volume.

If you want to browse for compatible apps, there’s a section in the app dedicated to it. Scroll down and you’ll be able to view the full complement of Chromecast Audio-friendly apps. The key players are there, like Spotify, Qello Concerts, Rdio, 8tracks, Deezer, 7digital Music and TuneIn Radio. Sadly, there’s no love for Amazon’s new streaming service and as we exclusively reported, Google did try to add Apple Music support but was unsuccessful in doing so. 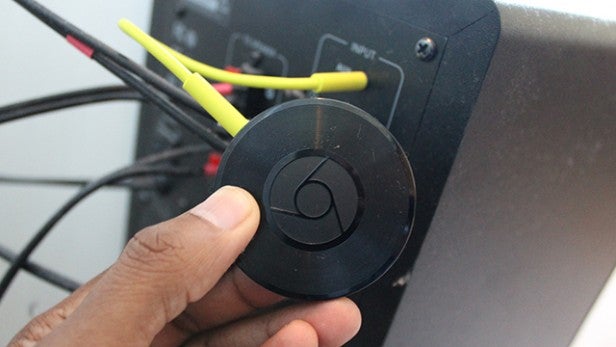 I’ve tried the Chromecast Audio with a series of speaker setups: surround sound speakers, traditional hi-fi systems and desktop computer speakers. In all instances the Audio was up to the task. There were no problems establishing a connection or setting it up and I was streaming music in minutes, every time.

Cast-enabled services such as Spotify and Deezer work effortlessly, letting you pick and control music selections. One of the best features is the ability to carry on with what you’re doing on your phone, tablet or computer without interrupting the music. I was playing Real Racing 3 on my iPhone 6S Plus without any issue.

As for sound quality, I tried it first with a pair of Bose active speakers and it handled music with no problem. From there I moved on to my old Soundscience 2:1 speaker system where I had to plug it into the separate subwoofer, and on up towards some more serious hi-fi kit. I didn’t feel it was a match for my Sonos setup streaming the same services. But in most cases where the Chromecast Audio will be used, the sonics will be influenced far more by the quality of the music stream, the speaker(s) and the amplification than by the Chromecast Audio. 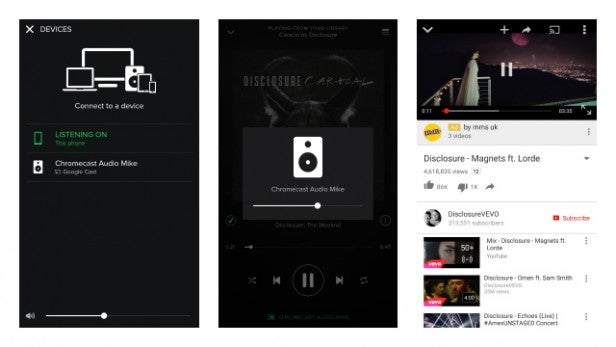 Where I did encounter some slightly niggling issues with performance and audio quality was when I had to cast a screen with accompanying audio from a website. Doing this is very similar to the way you do it on the Chromecast. You need to go into the dropdown menu on the app and select to Cast screen/audio. I tried it with YouTube playing a few music videos while the video played back on the phone.

There’s generally a 1- to 2-second delay with the video and the audio streaming. It might not sound like a lot but you’ll notice it. The standard Chromecast is likely to do a better job than that with video, and clearly the Audio’s hardware isn’t built to juggle sight and sound at the same time. 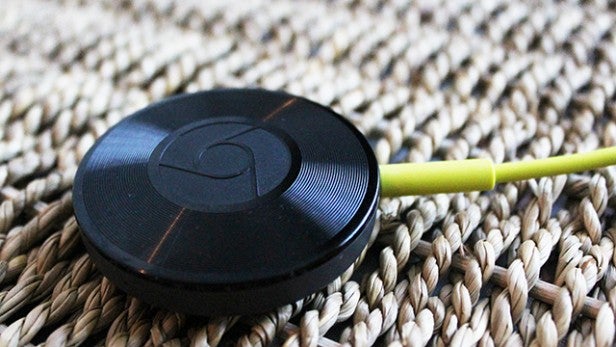 Should I buy the Chromecast Audio?

If you have a load of speakers you’re not ready to ditch, the Audio is a great way to give them a new lease of life. It’s so easy to use and set up. Streaming over Wi-Fi means there are no issues with range like there is with Bluetooth, and there are plenty of great audio services that support it, with many more likely to follow in the near future.

But I think its appeal is smaller than the regular Chromecast’s. It’s a tougher sell unless you really love your music. The key will be the addition of multiroom support. Just think you could spend £150 on five of these and if you already had the speakers in place, throw a house part without forking out on a more expensive speaker setup.

Even with most modern speaker setups offering Bluetooth and Wi-Fi connectivity, the Chromecast Audio could save you a serious amount of money and make your home audio even smarter.

The Chromecast Audio does what it promises in a really simple way, but it’s the future software updates that could make this a truly affordable way to create a multiroom speaker system.