What is the Amazon Fire TV?

We got the first flagship Amazon Fire TV streaming box in 2014. That’s a long time in TV land. At the time, 4K was still a new concept and nobody had heard of HDR (high dynamic range). Now both are mainstream concerns, key features in the best TVs, so it’s definitely time for an update.

The fundamental proposition is the same – this is a little box that streams Amazon Video and  best streaming services. It’s sleeker and faster but, really, you’ll need an Amazon account to get the most out of it.

Oh, and this product is only really applicable if you have a 4K TV. If not, you can save some money buy choosing the 1080p Amazon Fire TV Stick. 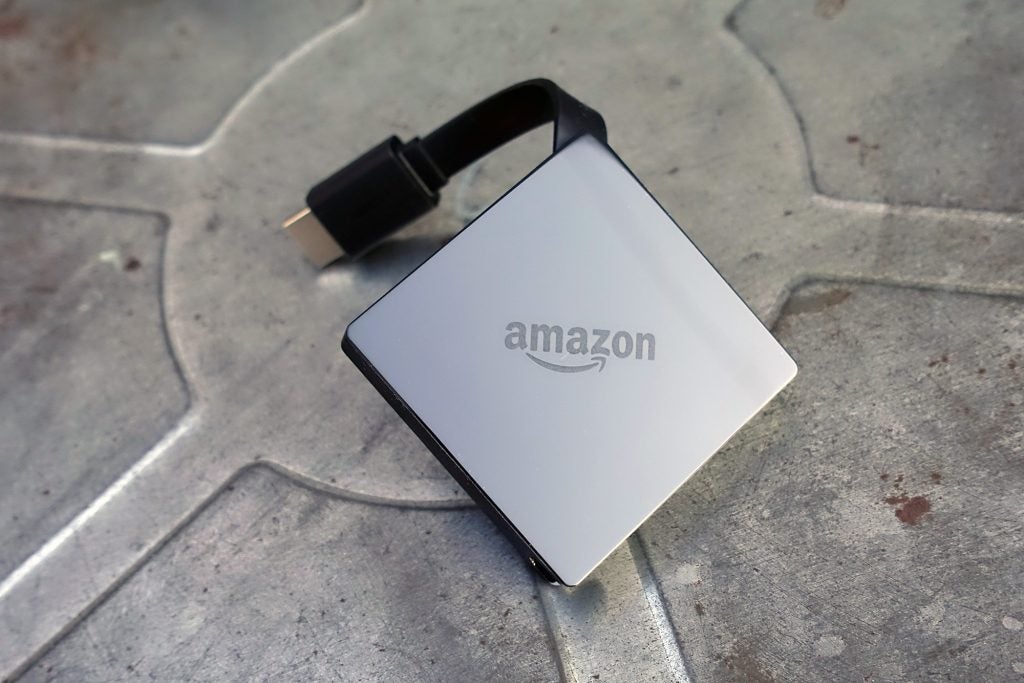 It appears Amazon has been testing out some sort of shrink ray, because the new Amazon Fire TV 4K is a quarter of its previous size. It was a set top box the size of two stacked CD jewel cases, but now it’s more like a stack of cheese crackers.

Like the Google Chromecast Ultra, the new Fire TV has a tiny HDMI cable coming out of it, which helps to get it into tighter set ups such as wall-mounted TVs. That’s one point Amazon has over the Roku Streaming Stick Plus, which has a rigid form factor and no bendy HDMI adapter.

Power supply has been switched from mains to microUSB, but don’t think that means you can run it off your TV – it insists you use the supplied mains adapter. It’s the same story with the Google Chromecast Ultra. To me, having to use a mains block defeats the purpose of shrinking the box so small. Meanwhile the Roku Streaming Stick Plus can run off any old USB port.

Amazon has reverted to glossy plastic for the top of the Fire TV. That’s going to be a dust and fingerprint magnet, but at least it’s tucked away so you’ll probably never see it once you set it up.

The remote is familiar, which is a good thing. It’s got just the right number of buttons and they’re nicely laid out. 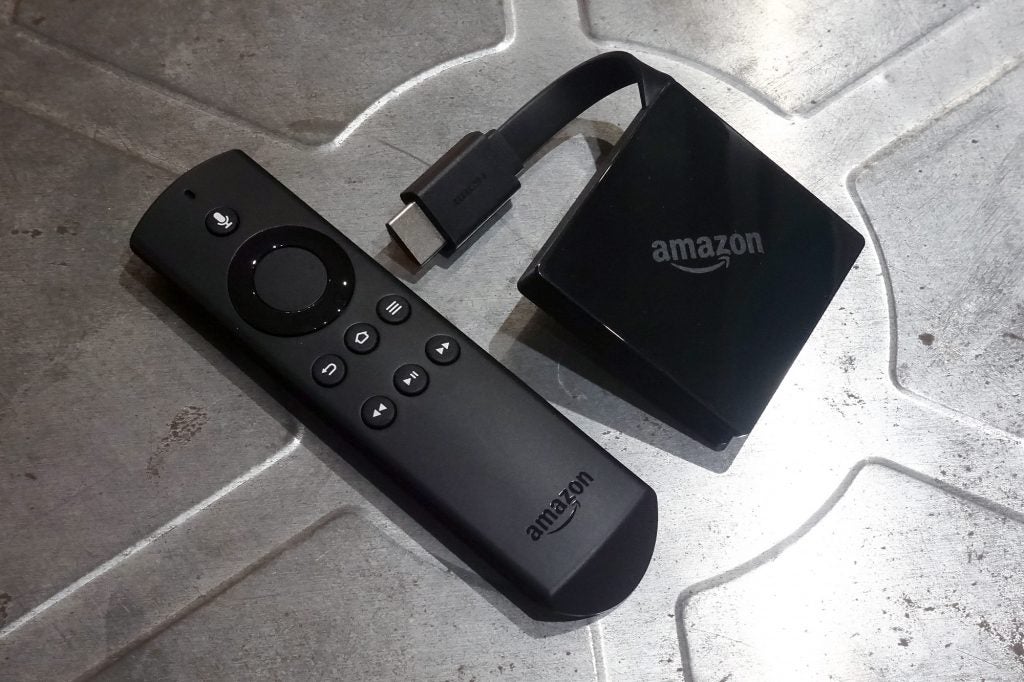 Let’s take a moment to consider whether you need this device at all, since you need a 4K and HDR TV to display a 4K and HDR picture. Nearly all of those have built-in streaming apps, so the real reason for getting a streaming device is in case you don’t like the TV’s built-in interface – a common concern, and the Amazon Fire TV is a good solution.

The headline feature here is the ability to output video in Ultra HD 4K at 60fps, and in high dynamic range. The previous version could do 4K but only up to 30fps, because it had an HDMI 1.4 connection and that’s all it could do. The new version has HDMI 2.0.

HDR support comes in HDR10 flavour. That’s the open standard everyone has adopted. There’s no Dolby Vision, a rival format using dynamic metadata to optimise the picture scene by scene. That’s something the Apple TV 4K has for justifying its higher price tag.

There is Dolby Atmos audio, however. Well, there is Dolby Digital Plus, which streaming services can use to deliver Atmos if they feel like it. So far there’s not much Atmos so be heard anywhere.

The quad-core processor has actually been slightly downgraded, from 2GHz to 1.5GHz, but functionally I didn’t notice a huge difference. There is 2GB of RAM and 8GB of internal storage. Gone is the ability to add your own memory card, but I never found myself using that anyway.

Related: Netflix vs Amazon: Which streaming service deserves your cash? 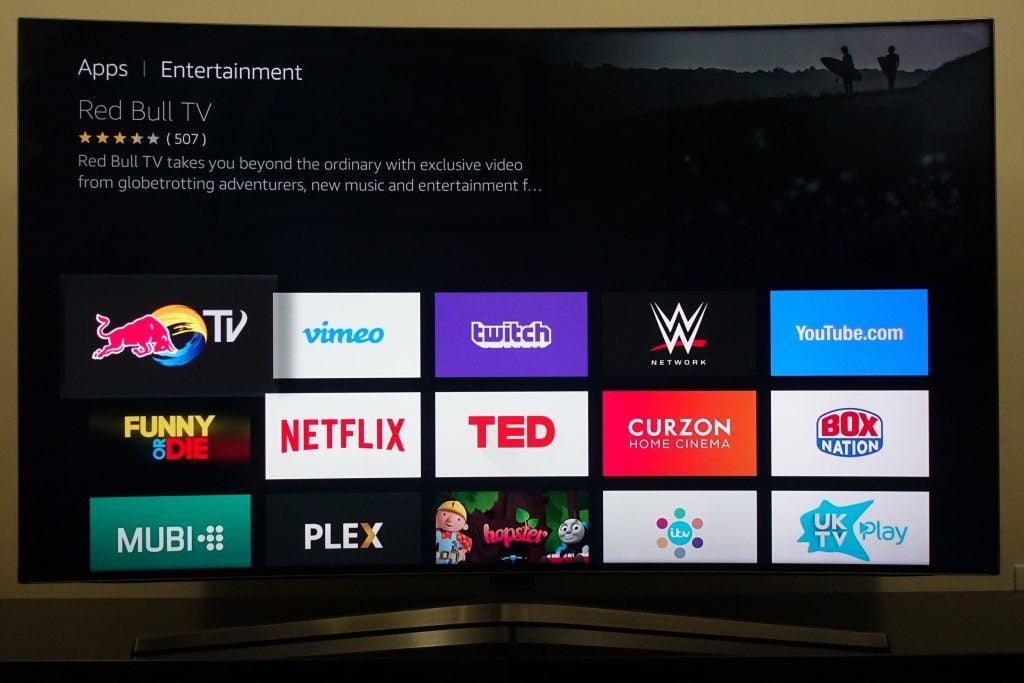 As with the non-4K Amazon Fire TV Stick, Amazon has integrated its Alexa voice assistant. She’s activated by holding down the microphone button on the remote.

As we’ve already seen on the Amazon Echo devices, Alexa is very helpful. On a basic level, she can answer questions, take notes, set timers or tell bad jokes. She can also control elements of your smart home, such as Philips Hue lightbulbs or Nest thermostats. All of that has been transplanted into the new Amazon Fire TV box, so you can use the same remote to click play and turn off the lights.

Better still, the fact that Alexa now has control of your screen means she can help in a more visual manner. Ask for weather and she’ll show you more information than she could read out. I liked being able to ask for specific actors or actors. Voice recognition is spot on – I usually throw in personal fave Chiwetel Ejiofor as a test, but Alexa knew exactly who I was talking about, bringing up such titles as Doctor Strange, Serenity and 12 Years a Slave.

Better still, having Alexa integrated into the experience functions a little like having an Amazon Echo device. From your sofa, you can tell Alexa to control various smart home elements, such as Philips Hue lights. For a deep dive into everything Alexa can do, check out our Amazon Alexa Guide. 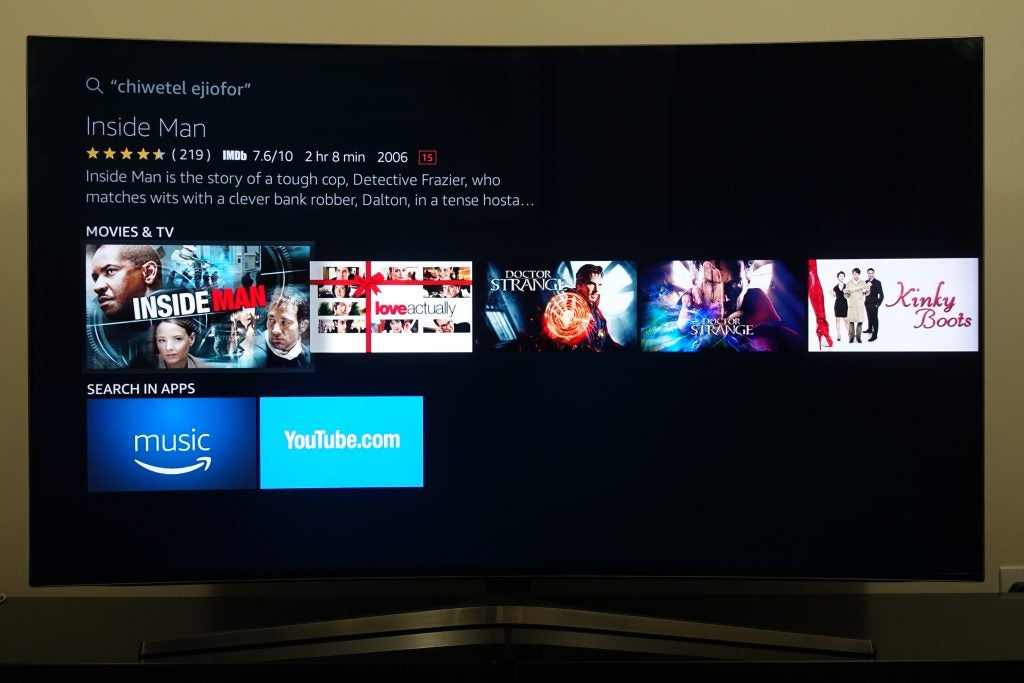 App support is mostly good. 4K and HDR comes from Amazon Video and Netflix. YouTube is there too but without HDR, and 4K clips max out at 1440p (Quad HD). You also get the UK’s key catch up apps: BBC iPlayer, ITV Hub, All 5, Demand 5 and UKTV Play. The only big name missing is Now TV, which is the easiest way the UK can access HBO titles such as Game of Thrones.

The interface is a mixed bag. I can’t blame Amazon for putting its services front and centre, but non-Amazon subscribers might feel an element of hard sell. The home page makes a decent stab at integrating third party services, but I can’t help feeling it’s a little cluttered, particularly when there are screen-wide ads that you have no choice but to click past. I would recommend holding down the home button, which gives you a shortcut to your apps. That page is a lot cleaner. In HDR images I did initially notice a little colour banding, but then I noticed there was an option in the settings to switch between 8/10/12bit colour.

The Fire TV is snappy, too. Menus move along as quickly as I am physically able to click. Video buffering to maximum resolution is fast, even when loading video in 4K and HDR. It’s also a stable connection – I didn’t experience any dropouts in testing.

Alexa integration work really well for movies, too. You can tell her to rewind by 10 seconds and she’ll do it. Much easier than faffing with the rewind button and overshooting to the start of the film. 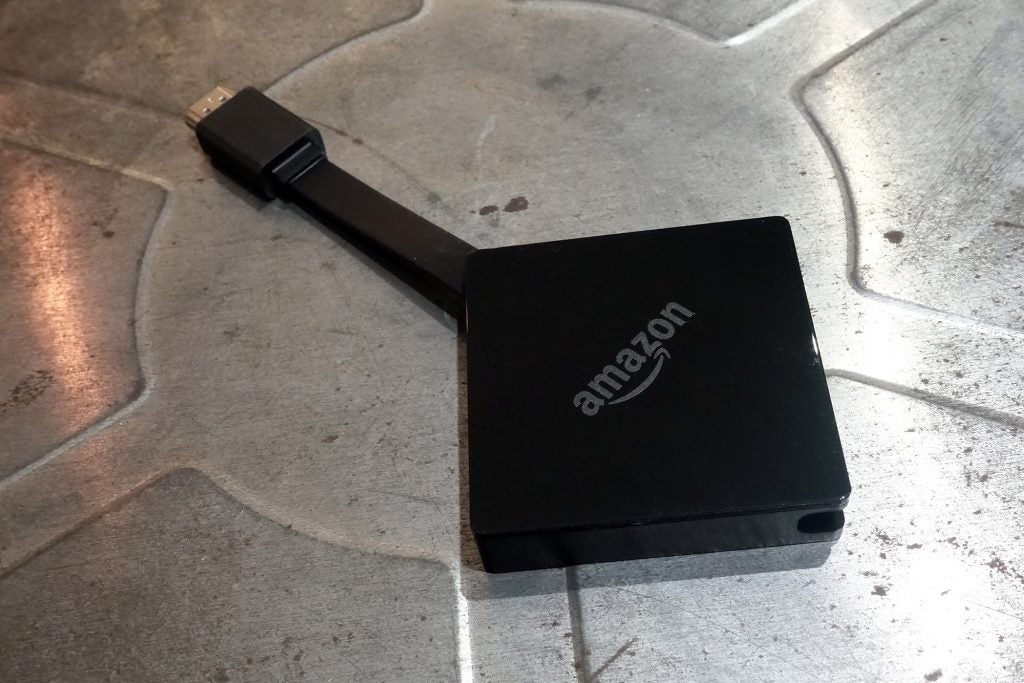 Why buy the Amazon Fire TV?

If you want a streaming device, the new 4K Amazon Fire TV is one of the better ones.

It’s fast, easy to use, and app support is pretty good. Alexa integration is also very useful, so if you have smart home components and you want a more integrated experience as a whole, this should fit right in.

A good attempt has been made to welcome non-Amazon subscribers, but if you’re looking for a platform-neutral approach, you should check out the Roku Streaming Stick Plus. That doesn’t have smart home integration, however.

If you’re in the Google camp, you might also want to check out the Chromecast Ultra.

Amazon’s little black box of wonder is back and better than ever.