What is the Bowers & Wilkins PX?

Bowers & Wilkins is best known for its hi-fi speakers, but the company also puts out some fantastic headphones. The B&W PX is its first crack at a set of wireless, noise-cancelling headphones.

Wireless NC headphones are more popular than they’ve ever been, but B&W faces tough competition from the Bose QuietComfort 35 (a perennial favourite) and the Sony MDR-1000X (our reigning champ).

To differentiate itself, B&W focuses on its core strengths of luxury and audiophile sound quality – but it has some impressive tricks up its sleeve too. It’s a winning combination: the B&W PX are the finest wireless, noise-cancelling headphones on the market. 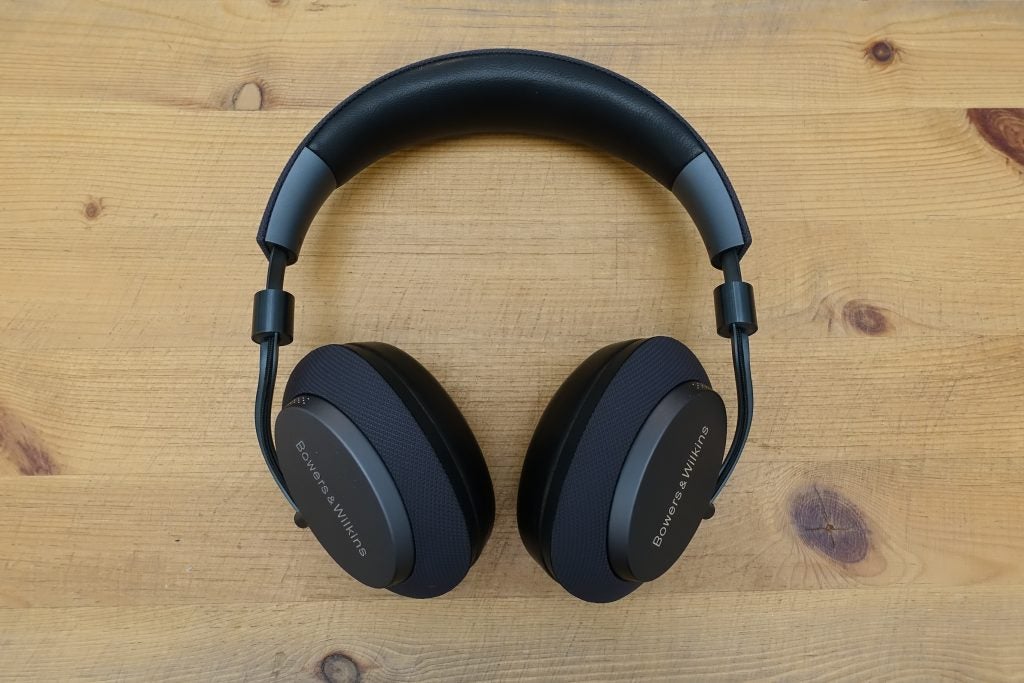 The B&W’s design doesn’t stray too far from previous models. That is, you get ample leather-lined padding and sculpted metal elements – the headphone equivalent of an executive armchair. There are some fresh, contemporary features, but the the overall aesthetic is unmistakably B&W.

The ear cups are elliptical in shape, creating a better seal around your ears than those that are round in shape. A wiry metal frame and exposed cables connect the ear cups to the headband.

In the past, B&W headphones have been overwhelmingly clad in leather. Here, however, it’s been limited to the replaceable ear cups and the underside of the headband. On the outside, the PX is lined with ballistic nylon. The metal elements are still made of aluminium, only now much of it is anodised instead of highly polished. The overall effect is more Aston Martin; less Bentley.

As noise-cancelling headphones go, these are some of the nicest I’ve tested. The PX are beautiful headphones. They’re far more luxurious than the plastic – and, admittedly lighter – Bose QC35, and more interesting than the Sony MDR-1000X.

The B&W PX are available in two colour combinations: black with ‘space grey’ aluminium or dark blue with ‘soft gold’. 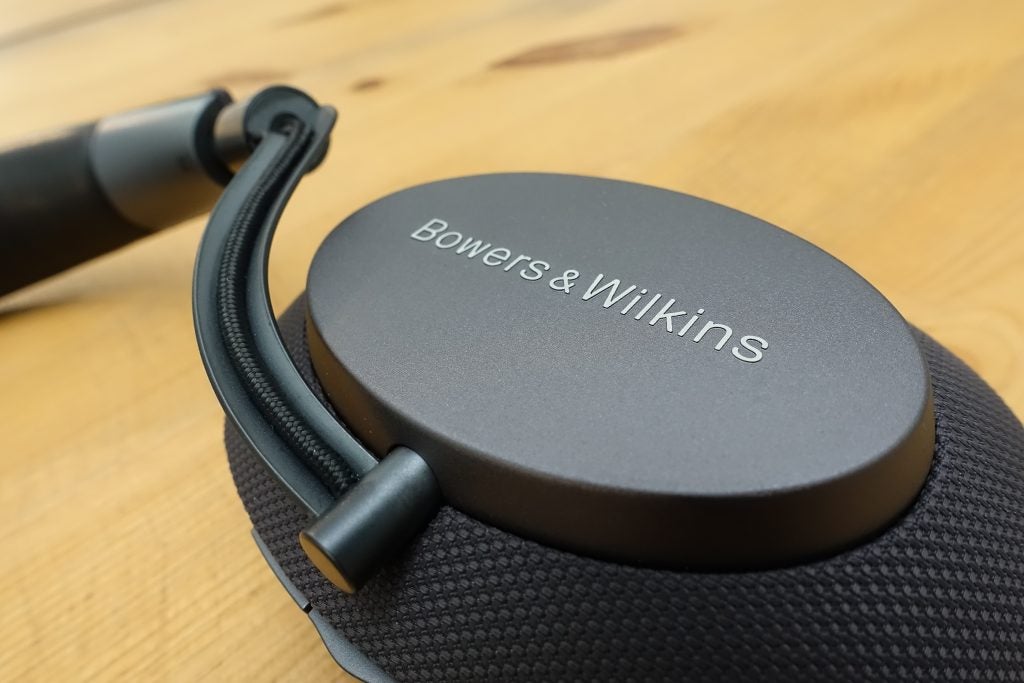 Good-looks alone can’t cut it, so thankfully the B&W PX sport a long list of features. These are no ordinary wireless noise-cancelling headphones.

I’ll start with the wireless. The PX use Bluetooth, but not your garden variety Bluetooth – they’re compatible with aptX HD. That’s an upgraded version of the already-superior aptX codec, and it can transmit hi-res audio up to 24bit/48kHz. AptX HD can be found on many of the top portable devices, such as the LG V30 smartphone.

The drive units are derived from B&W’s flagship P9 Signature headphones, so you know the PX mean business. The 40mm drivers are slightly angled to create a more convincing soundstage. 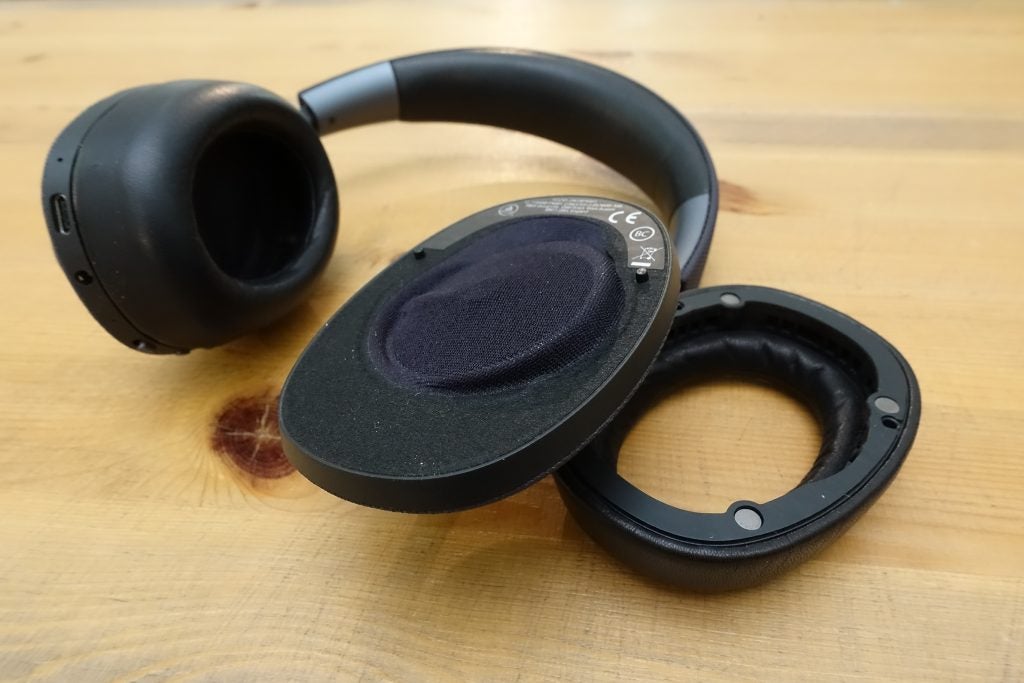 As for noise cancellation, you get a choice of NC modes with different levels of ambient audio passthrough. The ‘City’ setting lets in traffic noise so you don’t risk being run over when wearing the headphones out and about. The ‘Office’ setting lets in voices so you’ll know if you’re needed. ‘Flight’ has maximum noise cancellation to block out engine noise. It’s controlled by the Android/iOS app.

Most impressive about these headphones are B&W’s smart sensors, designed to minimise the faff that tends to accompany Bluetooth headphones: power and pairing.

After your initial setup, the PX are able to automatically power up, connect and resume playing music – you just need to put them on your head. Take them off, lift up an ear, or put them around your neck, and they’ll automatically pause. Leave them unattended and they’ll go into standby, waiting for the next time you put them on again. 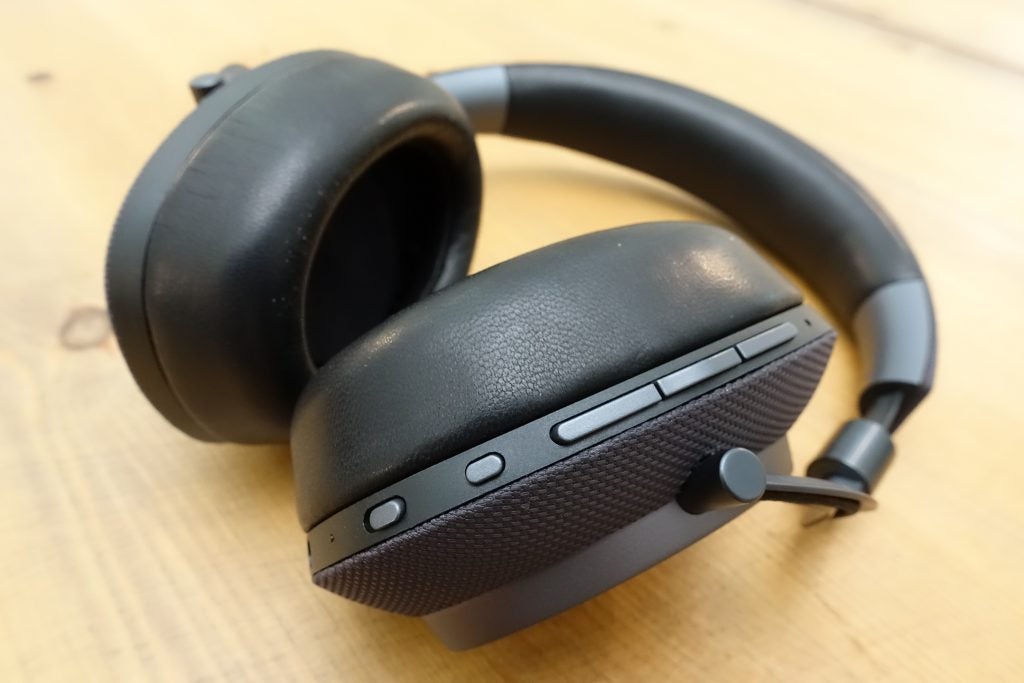 There are onboard controls to override the smart sensors – they aren’t flawless – but, generally, I find myself just using the buttons to skip or change volume. I rarely hit pause/play, and I’ve managed days of use without once touching the power button. This is hugely impressive. More impressive is the fact that this wizardry doesn’t appear to come at the cost of battery life.

B&W claims a rating of 22 hours with both Bluetooth and noise cancellation switched on, and this seems about right to me. You get 29 hours with BT on and NC off. Turn everything off and revert to using cables, and you’ll achieve 50 hours.

When you’re out of juice, the B&W PX recharges via USB-C cable, which is unusual; most rivals use micro-USB. USB-C can also be used to play music digitally from USB connections, in case you don’t have your (analog) 3.5mm cable handy. 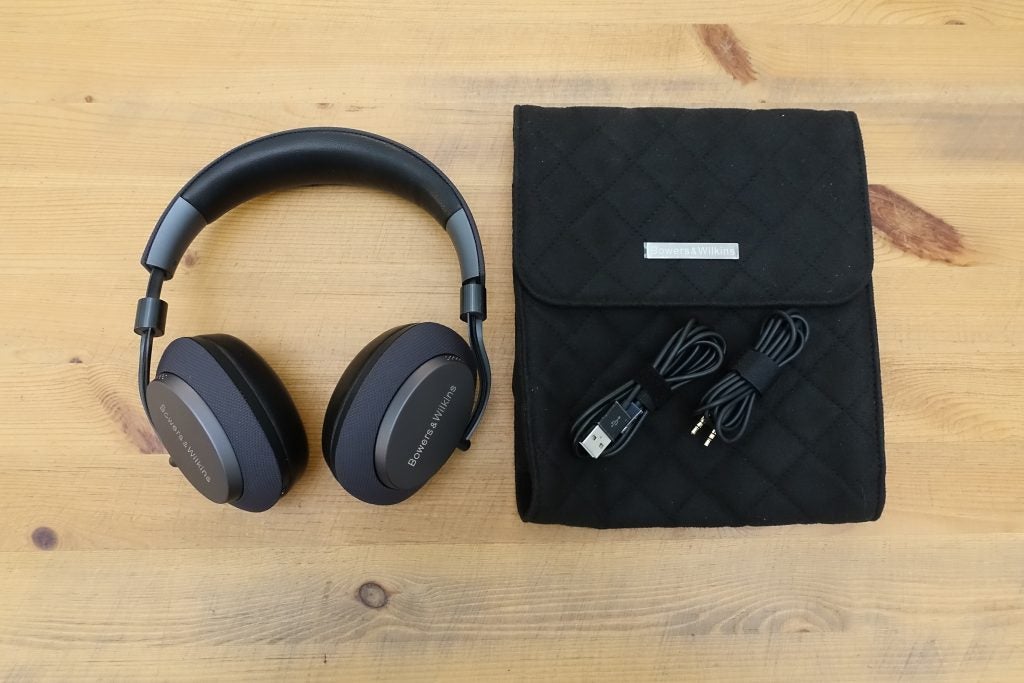 The B&W PX sound fantastic. In fact, they’re the best-sounding wireless noise-cancelling headphones I’ve reviewed. In terms of outright audio quality, these will be hard to beat.

There’s a remarkable sense of space. Instruments are given room to breathe, and the soundstage is nicely organised. The presentation is so airy that, for a moment, I thought these might be open-back headphones.

The level of detail is also superb. Textures don’t only indicate the instruments used, but also how they’re used. Then there’s the remarkable control of dynamics – the PX are agile, eloquent performers, easily shifting from low to high and down low again with impeccable precision, knowing when to let loose with infectious energy.

Buena Vista Social Club’s piano-led masterpiece ‘Pueblo Nuevo’ trips up many a lesser pair of headphones or speakers. With the B&W PX, it’s easy to feel Ruben Gonzales’ energy come and go, as he alternates between hammering the keys and tickling them, and everything in between. Leading and trailing edges of notes make it abundantly clear exactly what he’s doing. 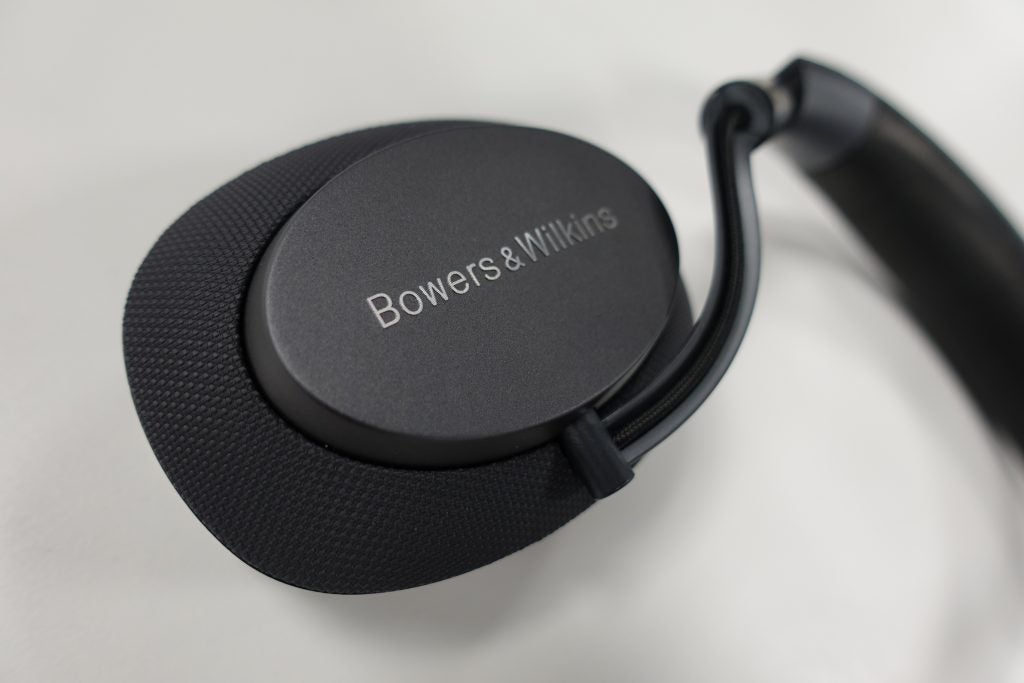 It’s even better if you make use of the aptX HD compatibility, as I did with my Astell & Kern AK70. I used to think listening to hi-res tracks on Bluetooth headphones was pointless, but this just isn’t the case. In wireless mode, the B&W PX can offer up a level of nuance, dynamism, detail definition and spatial information that I’d expect from a pair of wired headphones.

The tonal balance is good, too. In the past, B&W headphones tended to favour a warmer sound that was a little too rich; here, that appears to have been toned down a little. The low-end is never overbearing – there’s enough power to lend a track authority, but also enough control to ensure the bass is never distracting. The mid-range is just lovely. Vocals and guitars are direct and transparent – it’s a natural, insightful sound. 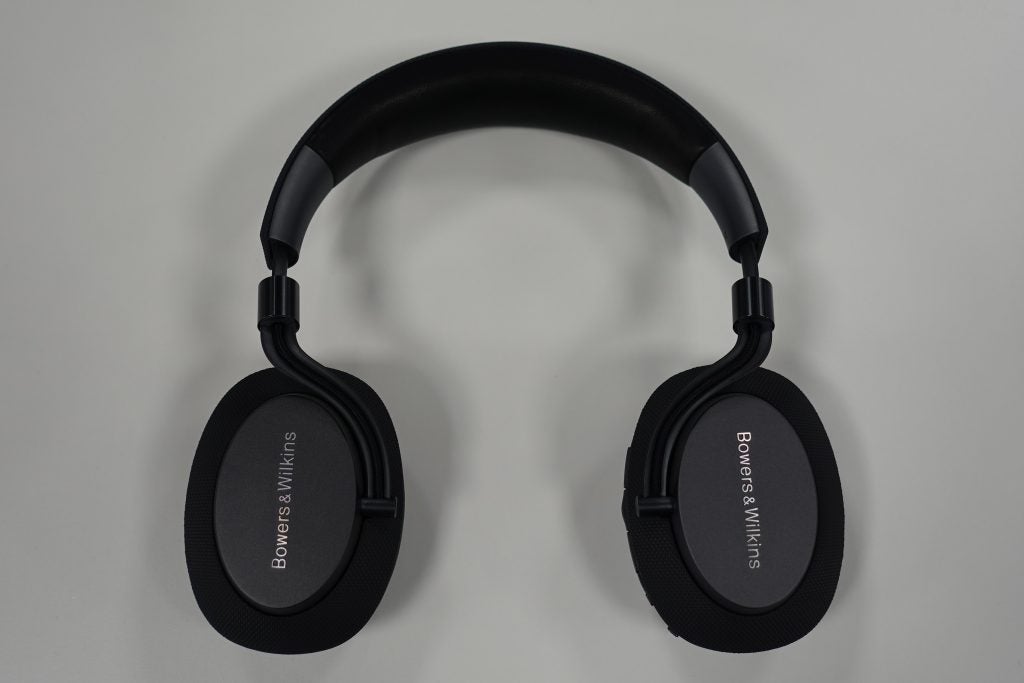 If there’s a negative, it’s that the noise cancellation could be a little better. That’s not to say it’s lacking; it’s very effective at blocking out low and constant sounds, such as the office air conditioning, or road traffic. And there’s no hiss either, which is always a good thing.

The PX are simply a little less effective at unpredictable noises, such as voices. As a result, on occasion it’s possible to hear folk on the desk two rows away excitedly discussing Mean Girls. It was also just about possible to hear the platform announcements on a train – not enough to hear what was being said, but I was aware there was somebody on the PA system. This is where B&W’s rivals make up some ground – the Sony MDR-1000X and Bose QuietComfort 35 are both more effective at filtering out such noise.

Still, this is a small price to pay for a musical performance of this calibre. In the event that noise does filter through, I’ll wager you’d be too busy tapping your toes to notice. 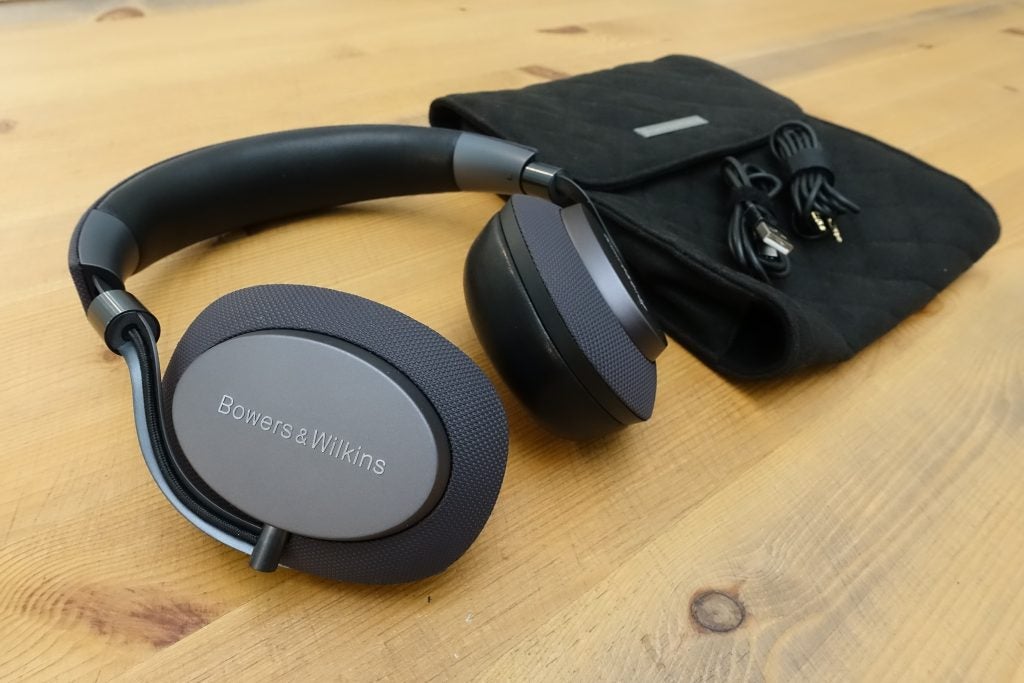 Should I buy the Bowers & Wilkins PX?

If you want the best-sounding, most musically proficient pair of wireless noise-cancelling headphones available right now, these are it. I’ve not heard better, and the smart sensor element genuinely makes music playback a more pleasurable experience, as you don’t need to faff with connections. If you’re an audiophile on the go, look no further.

The competition is tough, though. For absolute commuter isolation, the Bose QuietComfort 35 are still the headphones to beat. They’re not as talented musically, but if you want to shut yourself off from the world, the B&W are no match for the Bose.

Then there’s the Sony MDR-1000X, which are somewhere in between, with better musical performance than the Bose and stronger noise cancellation than the B&W. They’re an excellent all-round option.

The finest wireless, noise-cancelling headphones you can buy.