In 2016, the Trusted Reviews award for Best Headphones went to the Sony MDR-1000X, excellent wireless and noise-cancelling headphones with an intelligent set of features. Those have now been discontinued – the Sony WH-1000XM2 are their successor, and they’re a little better in almost every way.

The market is tougher now, and Sony faces competition from the Bose QuietComfort 35 II, B&W PX and Beats Studio 3, as well as the older Sennheiser Momentum 2.0 Wireless. But the new 1000X get so many things right it’s hard to fault them. They sound great, the noise cancellation is effective, and most of the features are genuinely useful.

If you’re looking for an everyday pair of headphones, these are hard to beat. That’s why Sony also won the 2017 Trusted Reviews award for Best Headphones.

The MDR-1000X had an excellent design that didn’t need fixing, so Sony has basically left it alone. That’s fine, since it meant the company could spare some resources towards expanding the 1000X range – check out the Sony WF-1000X wireless earbuds.

Anyway, the Sony WH-1000XM2 are more of a facelift than a makeover – there are a few minor improvements over the original, but unless you’re really looking for them you probably won’t notice.

They still look very smart, with the same streamlined silhouette and hardly any branding. The body is mainly plastic, with polished metal in the headband and good quality synthetic leather at the ears.

The paintjob is a little different: the beige version is now closer to champagne gold, while the black version is more gunmetal greyish blue. This adds a little visual flair, but the overall effect is no less subtle. If you want something with an executive vibe, the 1000XM2 will do nicely. 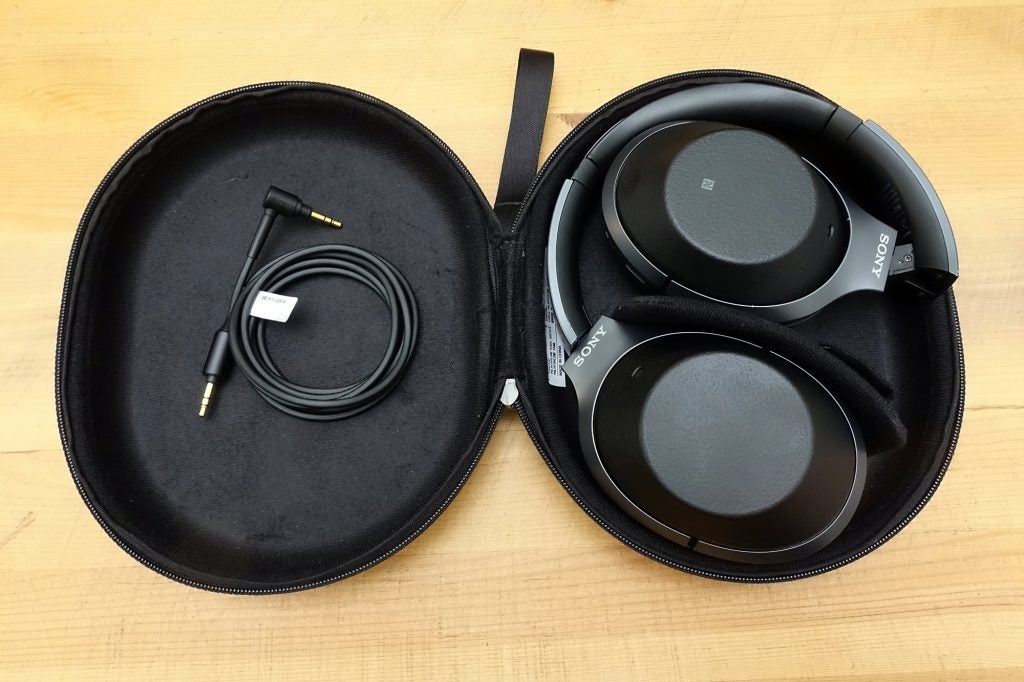 The synthetic leather on the outside of the ear cups has been swapped for a more tactile alternative. It’s less smooth to the touch – some might say it’s more plasticky – but I feel it’s thicker and tougher. I welcome this change, because the smooth finish of the original always seemed at risk of scratching. Now I feel a little less bad throwing them straight into my bag without first using the protective carry case.

What hasn’t changed is the polyurethane foam stuffed into the headband and ear pads. They’re as squishy as ever, and the 1000XM2 are as comfortable as their predecessors. Clamp force is just right; they hold the sides of your head but never squeeze. As before, the headband expands with satisfying clicks. The earcups can fold inwards on hinges, as well as swivel flat.

The buttons have been streamlined. Power/pairing remains where it is, but noise cancelling and ambient sound adjustment have been merged into one. That makes it a little harder to press the wrong thing, which might sound minor, but there’s value in being able to just get on with your listening. 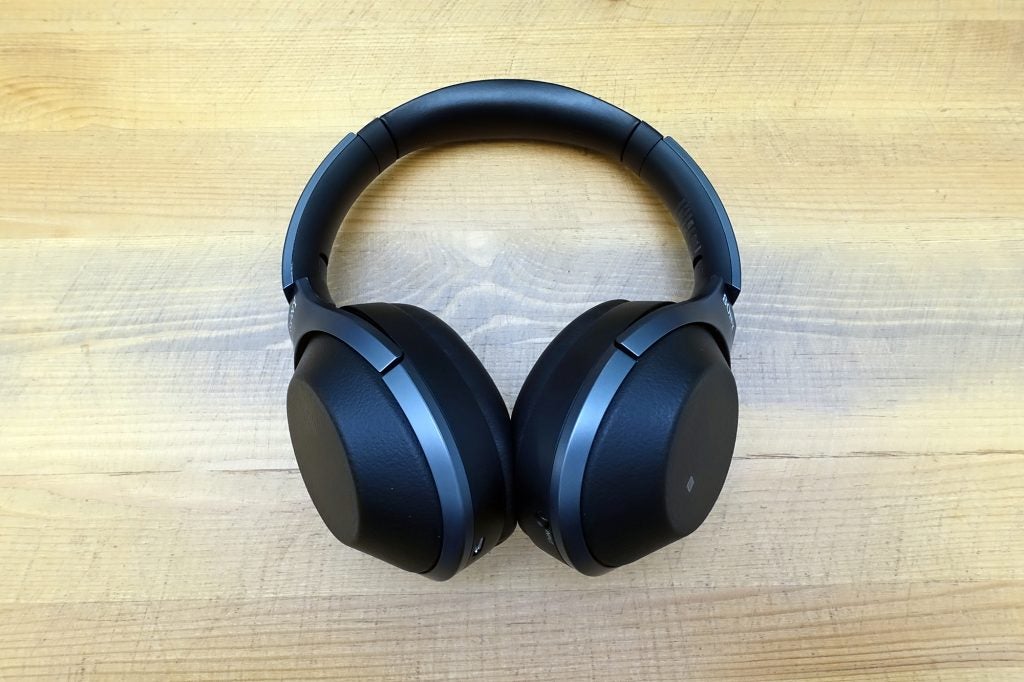 The improvements to the features list is a lot less subtle. There have been quite a lot of tweaks and additions.

The Bluetooth has been upgraded. The WH-1000XM2 are compatible with aptX HD, a higher quality Bluetooth format that can handle hi-res audio up to 24bit/48kHz. LDAC is also included, and it can handle 24bit/96kHz. LDAC was a proprietary format limited to Sony devices, but now it’s part of Android and available on any phone running the Oreo firmware. The left ear has an NFC chip for quicker Bluetooth pairing.

The touch-sensitive control pad on the right ear cup has been tightened up, so your inputs feel more accurate and responsive.The Quick Attention mode, where you hold your palm to the right ear to mute, remains unchanged.

The Ambient Sound feature is smarter. It still allows audio passthrough so you can be more aware of the outside world, but now it’s adaptive. The strength of noise cancellation will vary according to what you’re doing – sitting around, walking around, riding in vehicles or running for the bus. 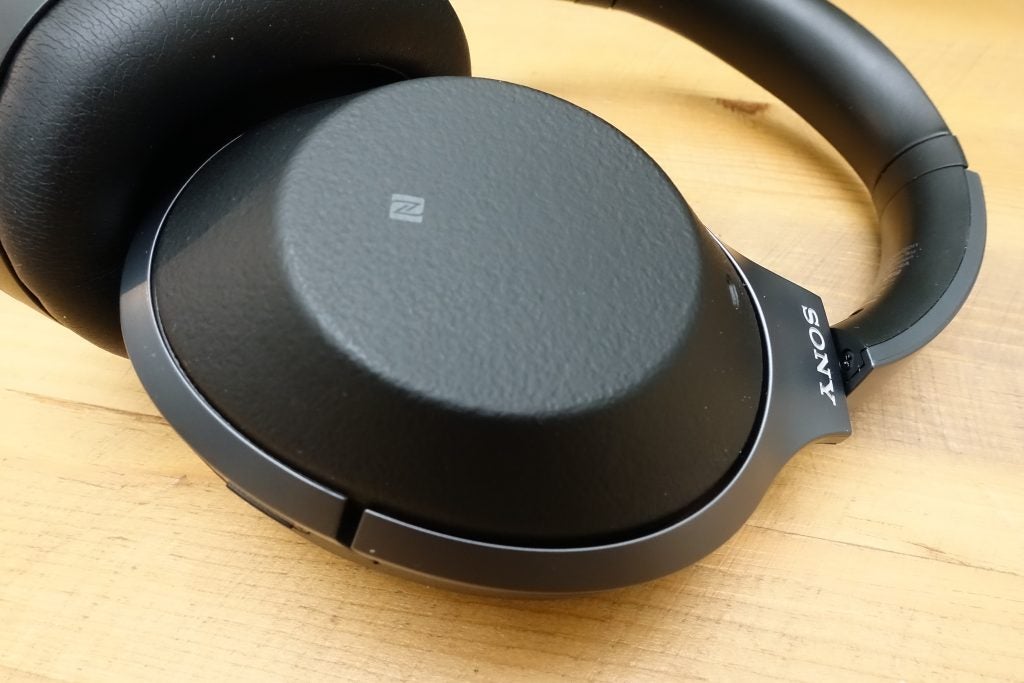 The Optimizer feature has also been improved. It still scans the side of your head to measure how good the seal is, factoring in sunglasses or big hair and adjusting the sound accordingly, but now it uses a pressure sensor too.

Why? Sony says changes in atmospheric pressure can affect the way the drivers and noise-cancelling microphones work. The 1000XM2 measure the barometric pressure in your immediate surroundings, and then compensates the sound accordingly. The idea is that you should get the best noise cancellation the headphones can offer, no matter if you’re in a train or 35,000 feet in the air.

In the time I had to test the Sony WH-1000XM2, I didn’t have any flights booked, so I can’t comment on the effectiveness of the pressure sensor. But the Optimizer feature definitely works, and I find myself re-calibrating the sound when I wear glasses. 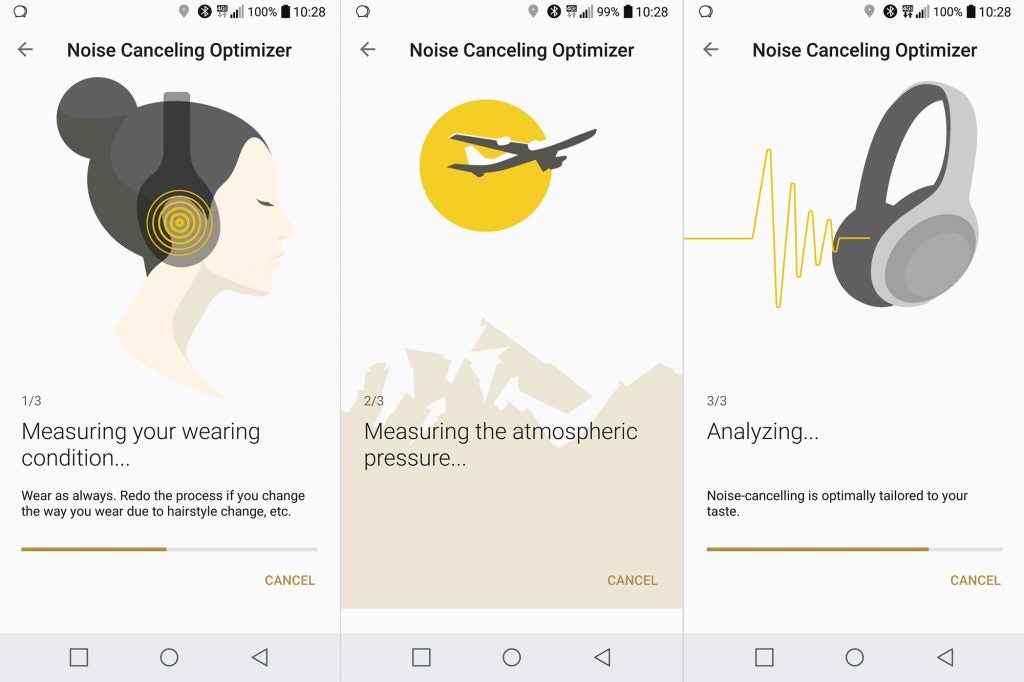 You can now tinker with the headphones with a mobile app. This lets you adjust the severity of the noise cancellation, or disable it entirely. You can also choose to prioritise connection stability over sound quality, or vice versa. That’s genuinely handy if you’re in a busy office or station and other people’s wireless signal interferes.

Less useful are the virtual positioning and virtual surround modes. The first lets you move the soundstage in front or around you; the second attempts to replicate the acoustics of spaces such as ‘concert hall’ or ‘arena’. I wouldn’t bother with these as they just make the music sound worse. If you want really want to mess with your sound quality, I’d just play with the EQ settings.

There’s also the DSEE (Digital Sound Enhancement Engine) processing, which claims to upscale compressed audio. This was on all the time in the previous version, but now you have the option to turn it off. I’d leave it on as it actually helps a little.

It would be reasonable to assume all these features sap battery life, but there is actually more juice than ever. The original 1000X lasted up to 20 hours, but the 1000XM2 goes up to 30 hours (wireless) or 40 hours (wired).

There’s even a quick charge feature – 10 minutes at the mains will give you 70 minutes’ play time. A few headphone manufacturers have switched over to USB-C for power, but Sony has stuck with the ubiquitous microUSB. 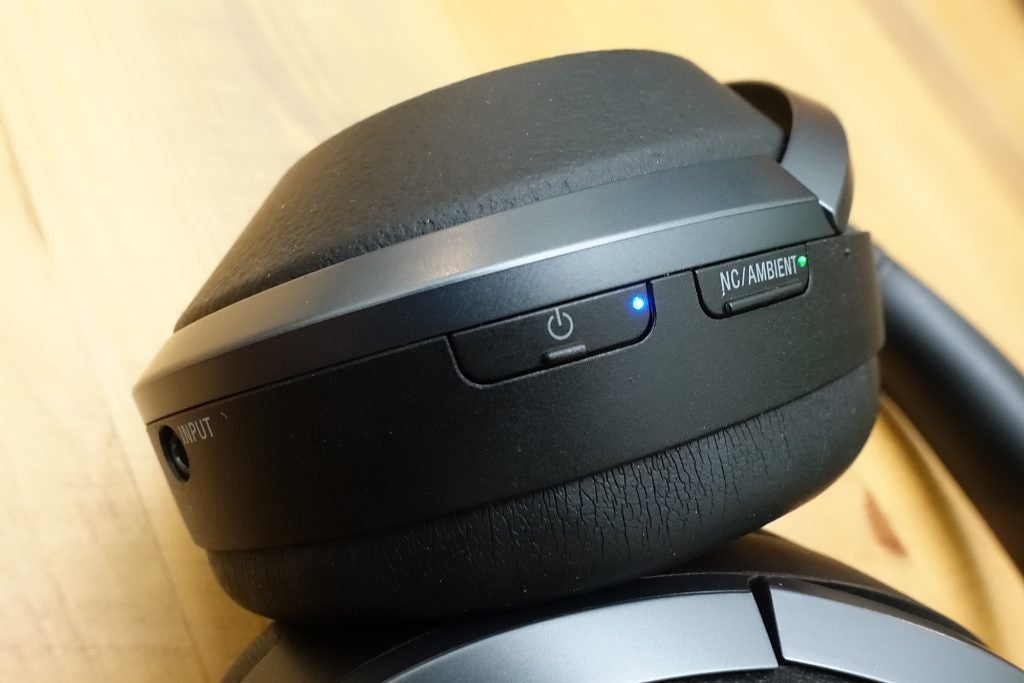 When it comes to noise cancellation, the Sony WH-1000XM2 are some of the best you can buy. I put them through a varied assault course including excited cafe chatter, rattling train carriages, roadworks with pneumatic drills and speakers blasting plane engine noises – the 1000XM2 dialled all that down to a whisper.

They’re not quite as deadly silent as the Bose QuietComfort 35 II, but it’s not a huge difference, and they’re more effective than the B&W PX. I could (and did) fall asleep listening to these headphones on a train.

It’s not just the effective noise cancellation that impresses me – it’s the smart element that Sony has introduced. The headphone app works with the accelerometers in your phone to determine whether you’re at rest, in motion or in transit – and the levels of noise cancellation really do change accordingly.

In ‘Staying’ mode, the headphones let some voices in so I could still tell if a colleagues wanted my attention. In ‘Walking’ mode, they let in more ambient noise so I could be aware of approaching traffic. As soon as I got onto a train, Transport mode kicked in and noise cancellation was dialled up to maximum. You can turn this off, but I love it. 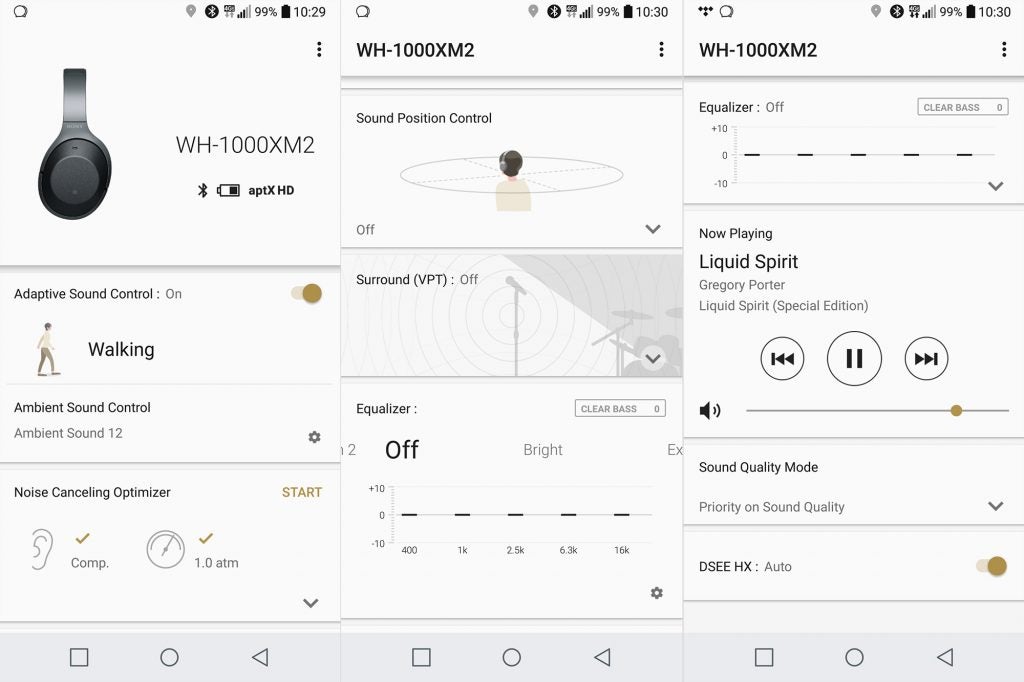 As for audio performance, the 1000XM2 have many of the traits I admired so much about the original. They’re a hugely entertaining listen, thanks to a combination of hard-hitting dynamism, boundless energy and impressive rhythmic precision.

That agility partly comes down to its impressive articulation and neutral tonal balance. No part of the frequency range feels exaggerated, and everything is nicely defined. There’s no flab to the bass, the midrange is direct and succinct, and the treble is clean, free of sibilance. It’s a very tidy presentation.

Compared to the original MDR-1000X, I found the 1000XM2 to be a little clearer and more hard-hitting. But the audio components are the same, so I’m going to put this down to the fact that I was using aptX HD compatible music devices (an LG G6 and Astell & Kern AK70). In wired mode, there was no discernable difference. The Sony WH-1000XM2 have improved on their predecessors in nearly every way. The physical design has been tweaked for the better, the audio performance is stronger, and the noise cancellation is smarter.

So the competition is tougher this year, but that’s not a problem for Sony. The Bose QuietComfort 35 II offer more effective noise cancellation, but they’re not as musically talented. The B&W PX are the best-sounding of the lot, but they’re not as smart or as good at noise-cancelling.

Sony, meanwhile, have excellent all-rounders that excel in every department.

The best just got better.