The Avita Admiror makes a brave choice in its design that really pays off in the looks department. However, the outdated processor and other performance sacrifices make it a tough recommendation at a fiercely competitive price point.

Avita continues to be an interesting player in the modern laptop market, from the mid-range Avita Liber and its outlandish design to the more modest Avita Pura. The new Avita Admiror goes for it in the design department once again, but does it do enough elsewhere to justify its price?

Many won’t have heard of Avita, but it’s certainly giving it the old college try when it comes to getting noticed. With the Admiror, it could draw more attention than ever before. The design is something to marvel at in more ways than one.

Nevertheless, the £700-£900 laptop market is a fierce one, with the Ryzen 4000 mobile processor series taking it by storm. The Admiror has an uphill battle from the off with its older Ryzen 3000 chip, but you certainly won’t find this design anywhere else.

The trump card of the Avita Admiror is its style, and it very much feels like everything else about this laptop was built to accommodate its look – but it is a great look. 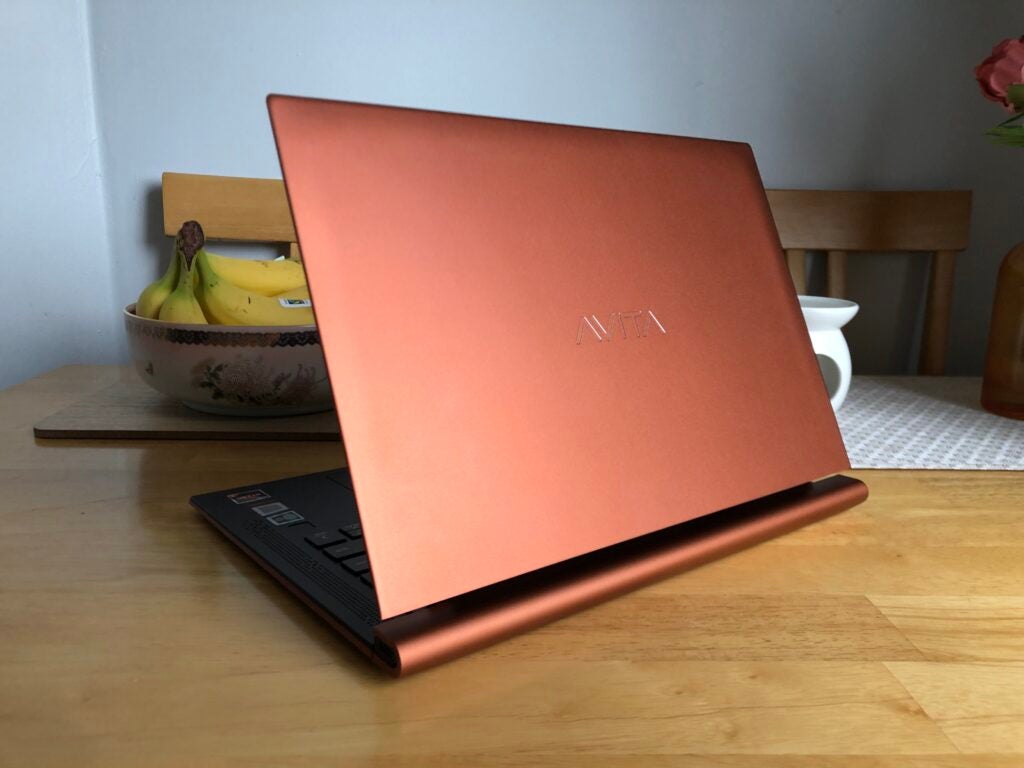 It might not be the first thing you think of when looking for a laptop but the Admiror might be the best looking laptop from the side, especially when closed. The aluminium outer shell can be either Flaming Copper or Blazing Brown, depending on which you choose, and our Flaming Copper model is simply gorgeous.

The Flaming Copper doesn’t take over the whole side, with its coating on the bottom and the lid being sleekly split by the black magnesium that spreads across the keyboard and surrounds the display. 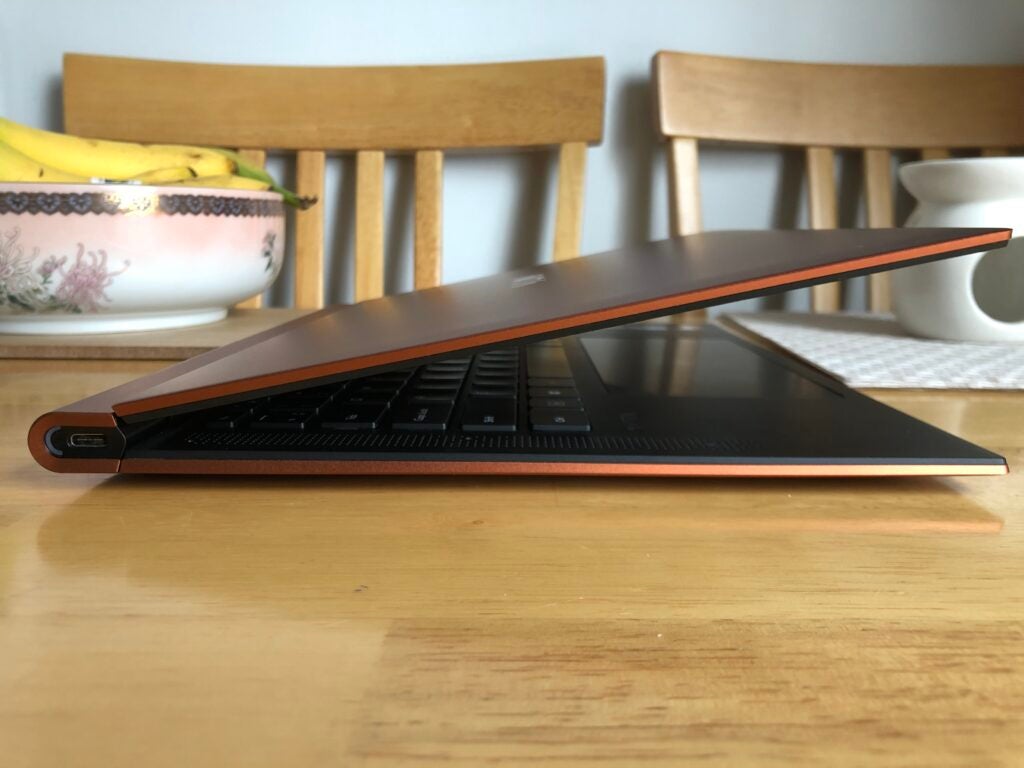 The thickest point of the Admiror comes in at 18mm, compared to the 11mm thickness of a Dell XPS 13 2020. However, it doesn’t really matter as the thickness declines significantly as you move away from the hinge, further adding to the unique look and creating the generally thin overall feel.

When open, the display looks glorious with the bezel disguised underneath the glass panel so there’s no protruding plastic or metal frame. The all-black keyboard and large trackpad give off similarly classy vibes to the rest of the machine. 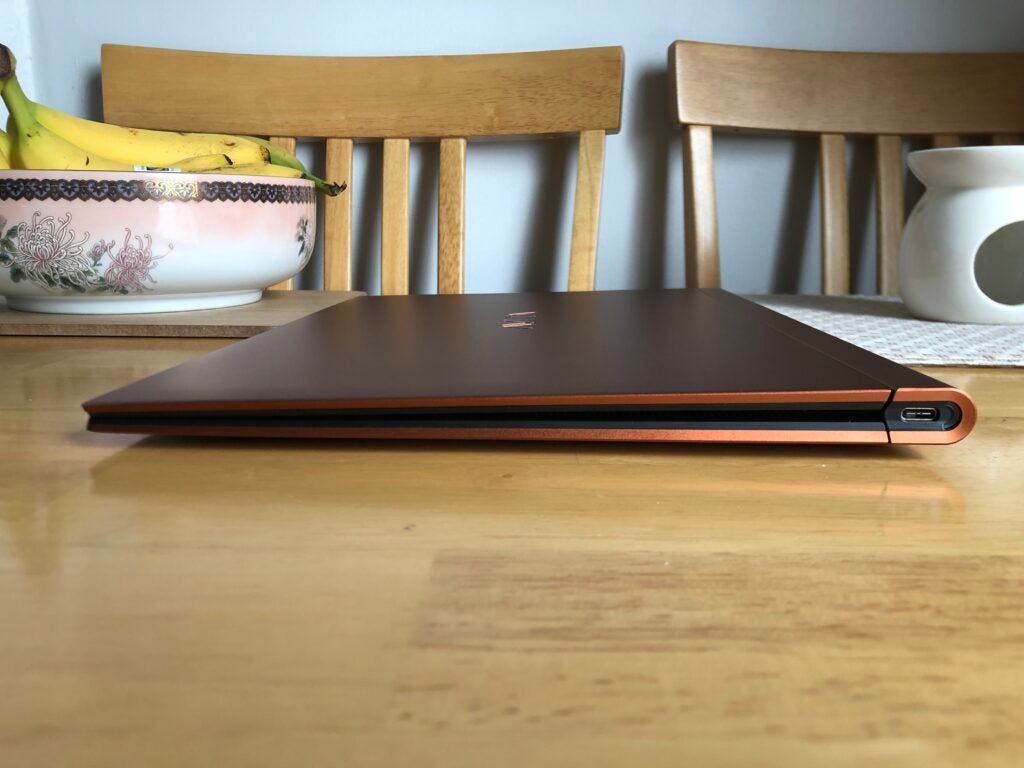 The thin design leads to a heavy sacrifice when it comes to ports, you only get two USB-C ports here – both of which do offer PD 2.0 charging, with one of either side of the laptop. Avita fortunately offers two dongles in the box, a USB-C to headphone jack adapter and a USB-C to USB-A, HDMI and headphone jack dongle. Still, anyone who hates the dongle life certainly won’t be pleased by this design decision.

I’ve already mentioned the keyboard and trackpad look great, but the performance needs to back it up. Fortunately, both are impressive in their own right.

Unlike many modern laptop keyboards, it isn’t recessed into the body of the laptop. Instead, the keys protrude from the base. This design decision allows this rather thin laptop to offer a typing experience that offers a surprising amount of travel and a slight mechanical feel. 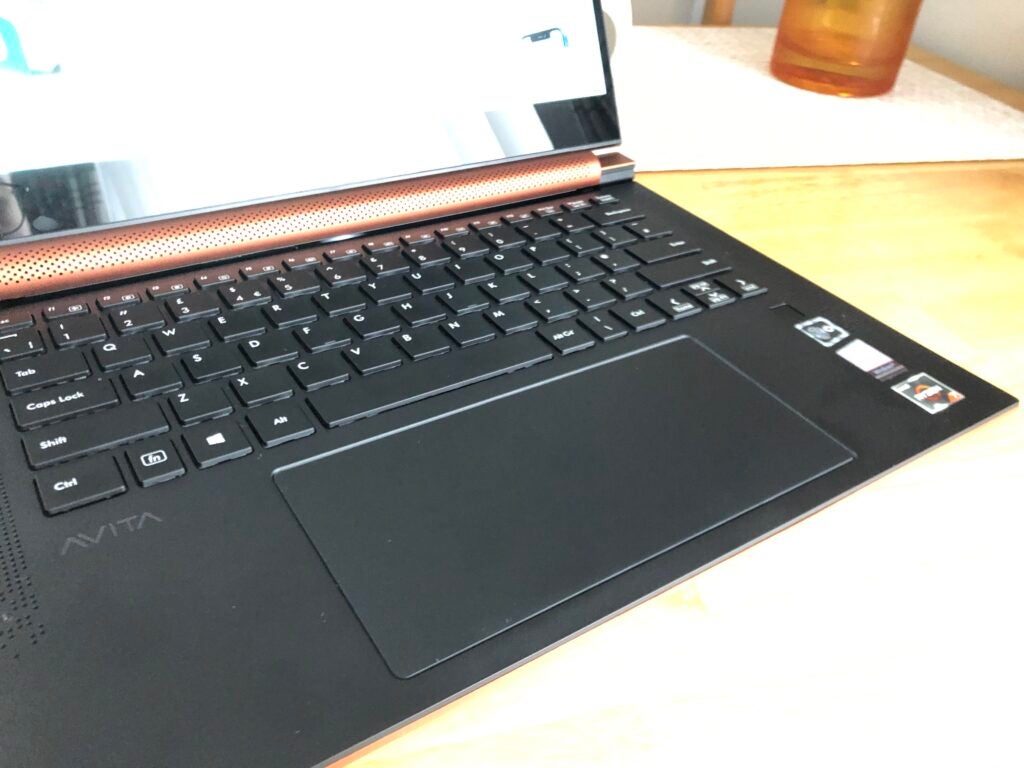 The trackpad isn’t as surprisingly good as the keyboard, but it’s decent nonetheless – owing a lot to its size. The trackpad is extremely wide, giving plenty of room for scrolling, and there’s a pleasant level of robust travel.

The Full HD IPS display does what it says on the tin; it won’t blow you away, but meets the level you’d expect for a machine at this price. 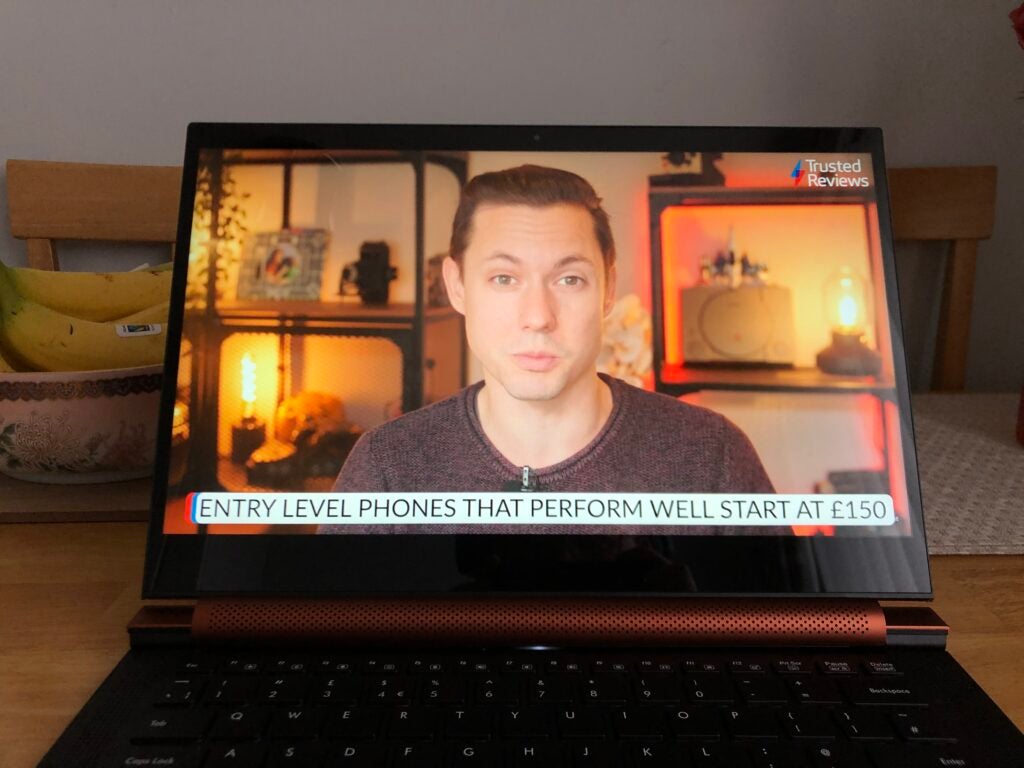 You might have a tad bit of trouble working in direct light with the Admiror but, in general, the brightness is perfectly acceptable. Being an IPS display, you get decent viewing angles and there’s a good amount of detail and colour whether you’re working away or watching a movie.

Those up on the latest laptop processors may scoff when they see this laptop is sporting the previous generation of AMD Ryzen mobile chips (3000 series), and it isn’t completely unreasonable given AMD Ryzen 4000 (and Intel equivalent) laptops can be bought for a similar price as the Admiror. However, if you only have basic productivity needs, you won’t have any troubles here.

The benchmarks above speak for themselves and cast the performance of this machine in a particular bad light against similarly priced competition. The HP Envy 13 sports an Intel Ice Lake chip  and absolutely dominates it on the performance front. For more horsepower hungry users, the Honor MagicBook Pro uses the higher-powered AMD Ryzen 4000H processor and is an even bigger step up without taking much more from your wallet.

Nevertheless, in day-to-day productivity use, this sleek laptop can handle near 10 browser tabs alongside a couple of other open programs before you’ll see any performance decrease, meaning you can’t rule the Admiror out if it tickles your fancy in other areas. The biggest advantage of opting for more modern processors is the integrated graphics engine, allowing for entry-level gaming and creative output; such workloads aren’t possible with the Admiror.

The SSD speeds of the Admiror may give potential buyers another reason to recoil. The read and write speeds come in at 435MB/s and 489MB/s respectively. The Envy 13 offers speeds at almost 2000MB/s while the MagicBook Pro is close to 3000MB/s, with both utterly eclipsing the Admiror. This means data stored on the hard drive (anything from a photography album to an app like Netflix) will be a lot slower to open up or save on the Admiror laptop.

A shining light for the Admiror is the surprisingly decent performance of the speakers, given the supremely thin body. While far from remarkable – you won’t want to be blasting music from this laptop – dialogue and low-level audio offers plenty of clarity. However, with its thin build, there’s little bass to speak of.

Once again, we find the Admiror lacking in a way that can likely be put down another sacrifice made for the sleek design. This time, the battery life is being shown up by the competition. 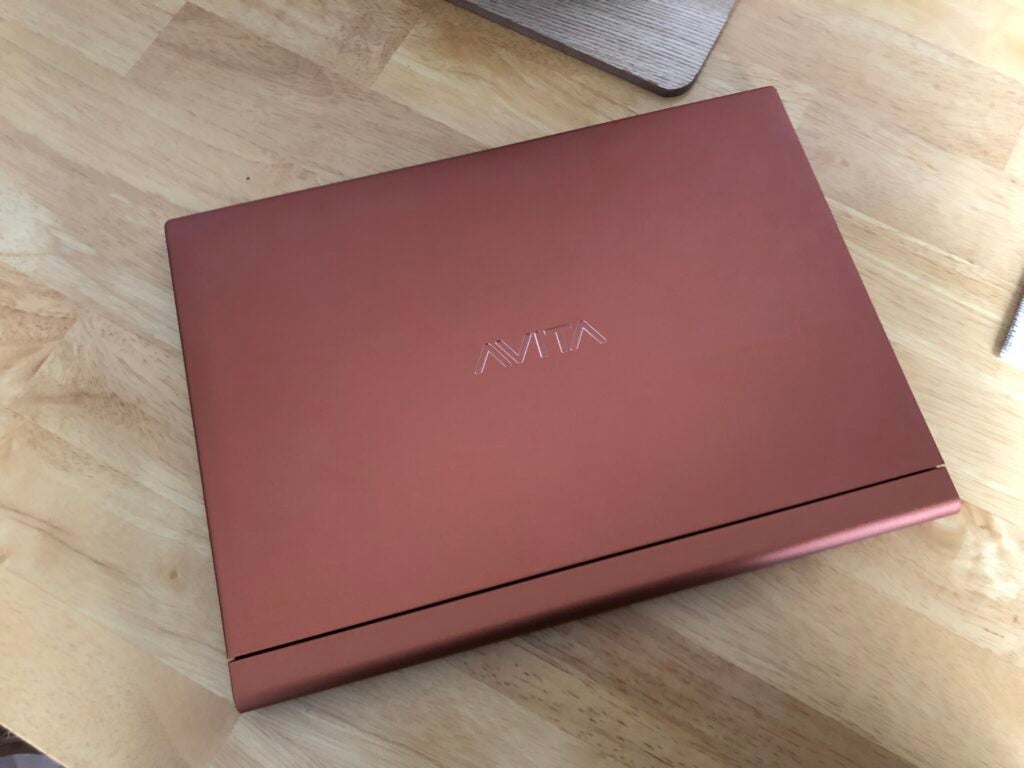 In our benchmarking, we got around 6 hour and 30 minutes out of the Admiror, meaning you might be reaching for the charger on a particularly heavy work day. By comparison, the Honor MagicBook Pro – with it’s much larger chassis – lasts around 13 hours and the HP Envy 13 – with a more comparable body – manages over 8 hours.

If you’re someone who likes a decent level of battery life that accommodates a more portable use case, then the Admiror isn’t for you.

Should you buy the Avita Admiror?

The Avita Admiror is a hard sell and that’s a shame. The sleek and unique design is truly like nothing else on the market, with two stylish colours on offer too.

However, it is comfortably beaten by comparatively priced rivals in numerous areas, whether they are thicker powerhouses or similarly thin ultrabooks. You’d have to really love the design of the Admiror to seriously consider it, especially with a ~£800 laptop market that is so strong right now.

If you are someone who can’t take their eyes off the flagship Avita, then the day-to-day performance won’t disappoint you, even if it offers less value than rivals.