The Honor MagicBook Pro is a unique laptop – but it won’t be for everyone. The combination of large display, productivity performance and strong battery life may mean it's the perfect machine for some. However, a better keyboard, improved portability, and better creative performance can be found elsewhere.

Honor and, by extension, Huawei have offered some of the best mid-range laptops you can buy for the past couple of years. With the Honor MagicBook Pro, it’s time to take on some higher-powered devices – but is it really a Pro?

Having reviewed the Honor MagicBook 14 and given it a stellar 4.5-star review, I’m well aware of what Honor can do with its more affordable take on Apple’s Ultrabook formula. While the MagicBook 14 felt like a MacBook Air mimicker, the MagicBook Pro’s moniker gives the misleading impression that it’s shooting for the MacBook Pro 16-inch.

However, there’s a significant performance gap here, with MacBook Pro 16-inch’s discrete graphics card ensuring it’s an impossible task for the MagicBook Pro to match its rival. Nevertheless, the design and competence of performance in their own right could still make this a reasonably priced workstation.

Until very recently, you’d have to pay upwards of £700-£800 to pick up a device sporting sleek and portable Ultrabook vibes. However, the Honor MagicBook 14 changed this, offering MacBook-esque design for a fraction of the price.

With the MagicBook Pro, Honor is shooting for workstation-like design rather than Ultrabook thinness – and, yes, it does look rather like the MacBook Pro 16-inch. 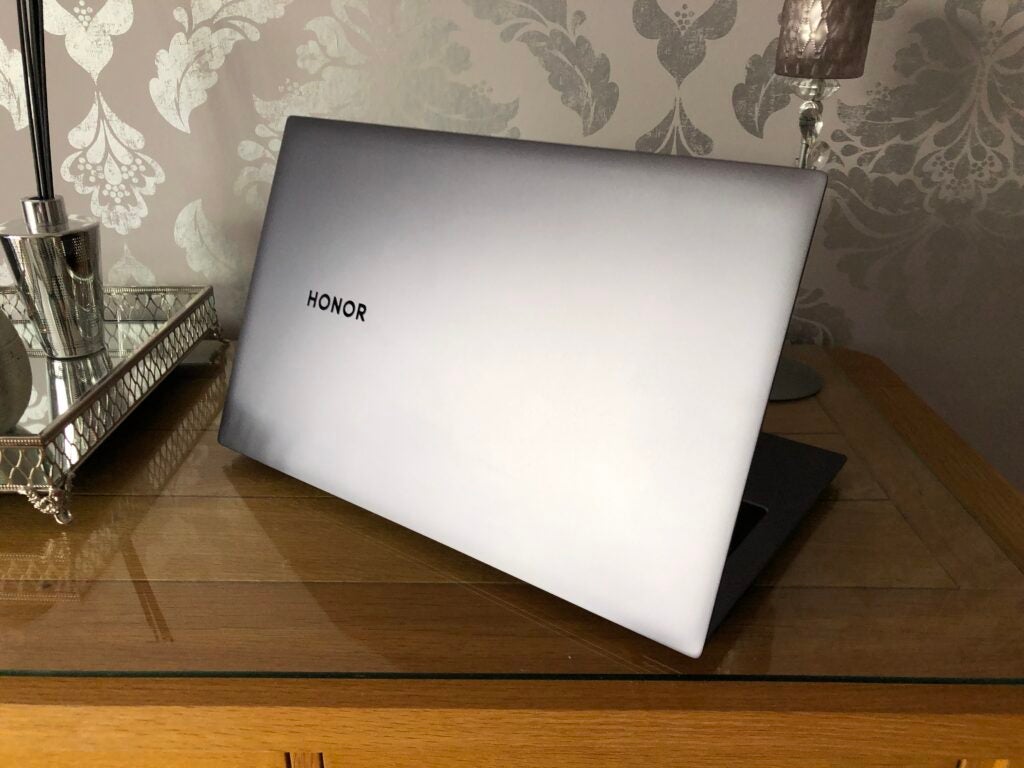 The first thing you’ll notice about this powerhouse is its width. With a 16.1-inch 16:9 display, this is the widest laptop I’ve used in some time. In a world where many premium devices are opting for a 3:2 panel, a device such as this is quite unique. The laptop at least avoids being even larger by sporting a delightfully thin bezel.

The MagicBook Pro certainly feels premium to the touch, with an aluminium chassis clearly mimicking the MacBook range. However, the faux-premium feat is slightly less impressive at this higher price – particularly with stronger competition. 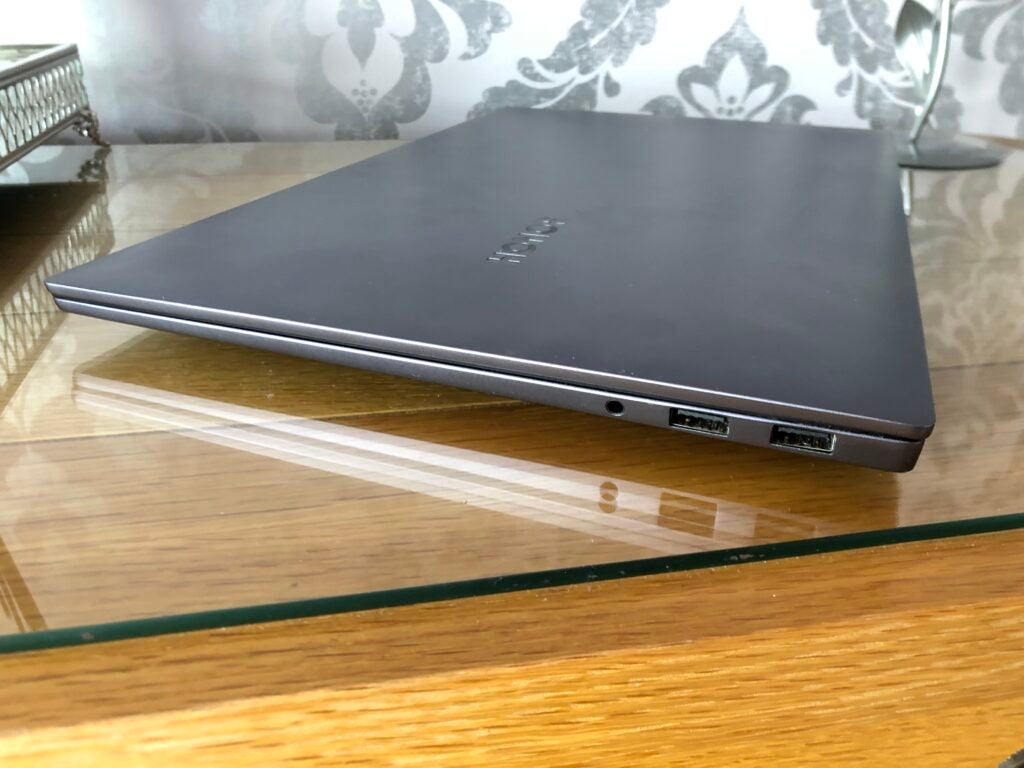 It comes with a decent selection of ports: there are three USB-A, a USB-C (which is used for charging), a HDMI port and a headphone jack. Unfortunately, that USB-C port isn’t Thunderbolt, and it’s also a bit of a downer that it will often be occupied by your charging cable.

If you’re considering the MagicBook Pro as a work machine, you might be disappointed to find that its camera is hidden away in the keyboard, popping up from an awkward angle when you need it. As you can imagine, it results in awkward viewing angles to say the least.

Many pleasant aspects of the MagicBook 14 are re-contextualised when they feature on a higher-priced and larger device such as the MagicBook Pro.

The MagicBook Pro has a similar low-travel keyboard to its thinner sibling, but that this thicker device couldn’t include something more clicky is disappointing, especially when the body doesn’t cram in a discrete GPU. 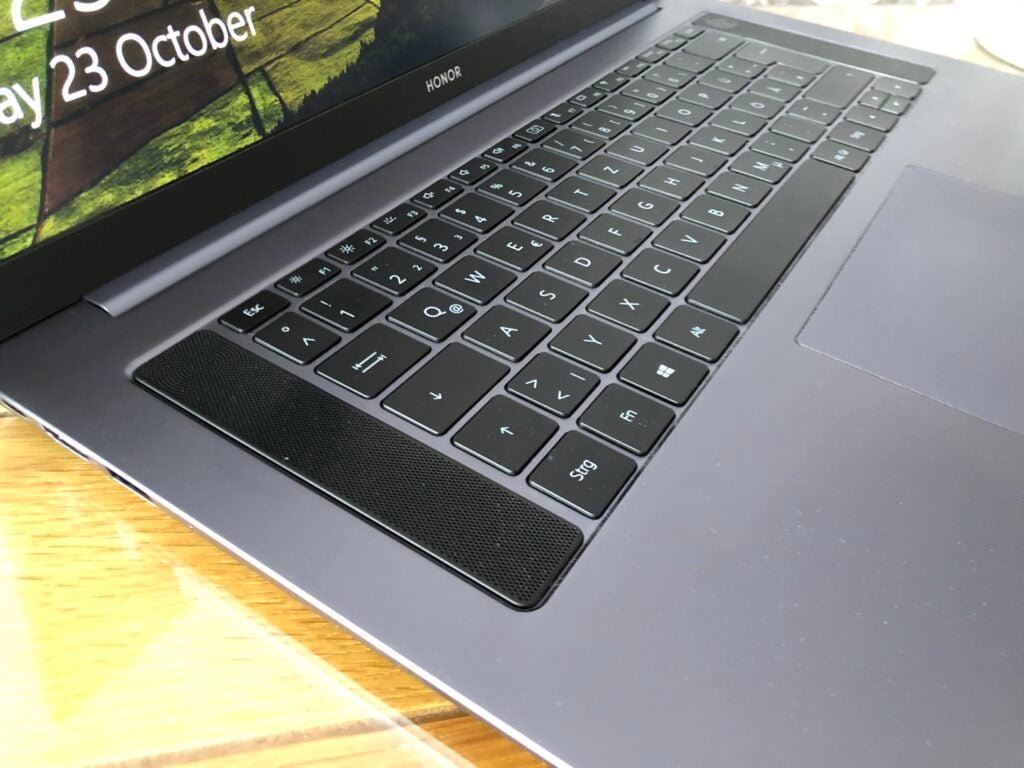 Nevertheless, the keyboard falls in line with what you’d expect from an Ultrabook at this price point. In general, the day-to-day keyboard experience remains pleasing and it’s far from fatigue-inducing, even if it isn’t all that satisfying.

While the keyboard performs perfectly fine and could come down to a matter of taste for some, the trackpad has a standout quirk. 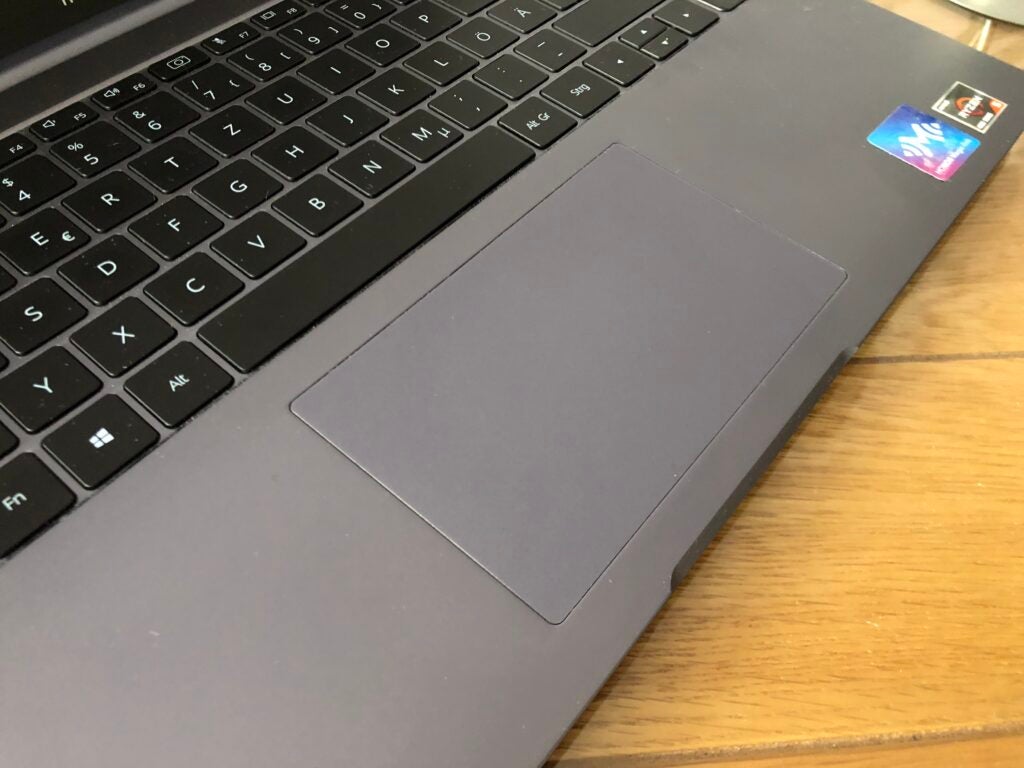 Overall, the trackpad is a delight to use. The large size of the MagicBook Pro allows for a fairly large trackpad for easy navigation – even if it isn’t quite MacBook Pro size – and most of its surface area is suitably clicky without feeling cheap.

The problem lies towards the front-middle section of the trackpad. If you apply a little pressure there’s some movement, and you’ll feel the pad hit resistance. However, this isn’t a click and you’ll have to press a bit harder to register a normal press. You’re unlikely to notice this often, and Honor says it isn’t a fault – but I certainly found it distracting.

The display on the MagicBook Pro is an exception amongst its rivals, with even its parent company Huawei – which often produces nigh-on identical devices to Honor – opting for a more common 3:2 14-inch display for its “Pro” laptop (Huawei MateBook X Pro).

It’s this unique feature that could make it stand out to those who like the idea of a large and wide 16-inch panel. While you won’t get the productivity benefits of a squarer aspect ratio, it does lend itself nicely to multitasking, with a window on either side of the wide panel. 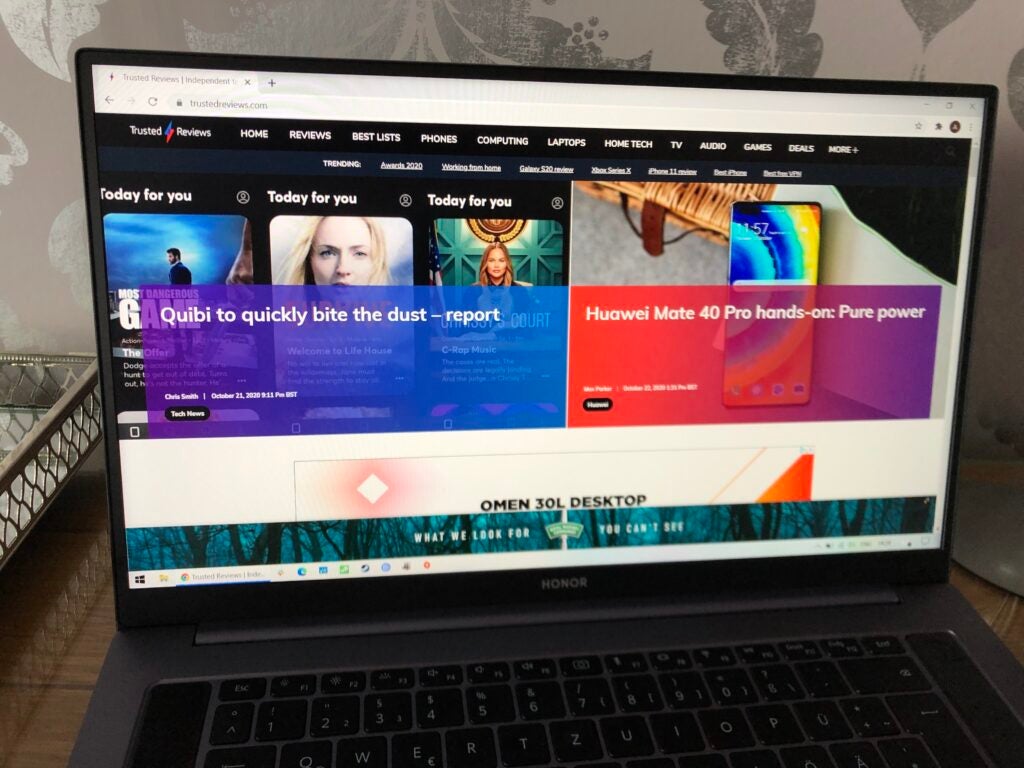 The performance of the display itself is decent, if unremarkable. At peak brightness, you get some vibrant colours and crispness when watching video. During daily productivity and under regular brightness, text and web pages are far less crisp and are far from eye-catching.

However, with its primary appeal being its heavy productivity offering, those who will be using this mainly for the web and processing programs won’t be too disappointed overall.

The Honor MagicBook Pro is a machine that eats productivity tasks for breakfast. While some more Ultrabook-like rivals may become warm or begin to get loud under heavy productivity workloads, the larger size of the MagicBook Pro (affording for Honor’s dual-cooling solution) means it often stays whisper-quiet.

This performance is in no small part thanks to the stellar AMD Ryzen 4000 processor (4500H) and 16GB of RAM. This is the only model available in the UK and, therefore, the model we tested.

The glaring omission of the MagicBook Pro, especially given its larger size, is a discrete graphics card. In today’s market, the term “Pro” often defines a machine that can handle more graphically intensive workloads – such as the MacBook Pro. You won’t find that here, even if some medium-level photo-editing is certainly possible.

With those key distinctions in mind, let’s take a look at the important Honor MagicBook Pro numbers:

As expected, Intel Ice Lake rivals do top the AMD Ryzen 4500H in single-core workloads, even if it wasn’t an issue for us on a day-to-day basis. However, the AMD dominates when it comes to multi-core performance.

The multi-core performance would be hugely helpful in more creative or gaming scenarios if the MagicBook Pro included a discrete GPU – but it doesn’t. Nevertheless, the high achieving multi-core performance may appeal to those who utilise computers for complex problem-solving programs or work with databases.

The Honor MagicBook Pro dominated the competition in our PCMark 10 holistic test, reemphasising its ability to handle the most demanding of productivity workloads.

We even managed to play some basic games on low settings without any trouble. So, if you’re a Fortnite or Apex Legends fan, you’ll be able to get the odd game in. Frequent gamers should look elsewhere, however.

You won’t be left wanting in the file transfer department, with the MagicBook Pro achieving 3408MB/sec read and 2708MB/sec write speeds. The results fall in line with rival HP Envy 13, while greatly surpassing the underwhelming results of the Acer Swift 3.

Bigger laptop, bigger battery… right? The MagicBook Pro answers with a firm ‘yes’. The Honor flagship managed over 13 hours in our tests, meaning you won’t be reaching for the charger on a regular working day, and may even make it to two days under lighter loads. 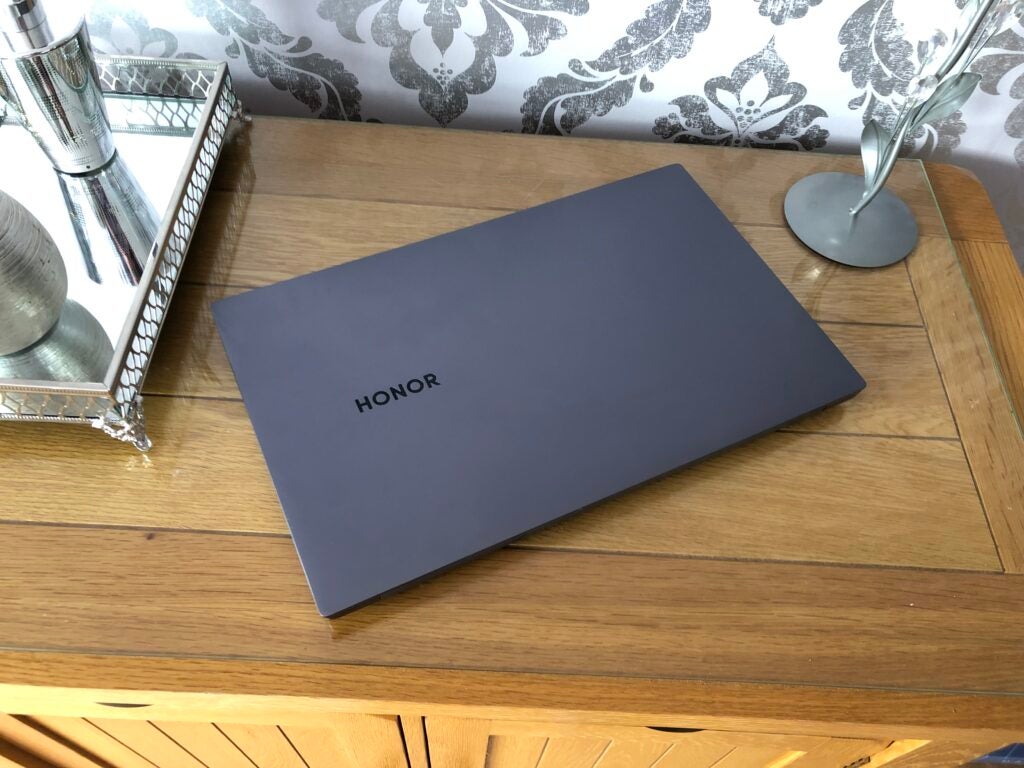 The long battery life means you won’t be left panicking to finish that last piece of work or Zoom call if in a location where plug sockets are at a premium. Thankfully, when low battery life moments do come and you can charge, the MagicBook Pro offers 65W charging. Fast-charging will get you to almost half a charge in half an hour, and to full in just over one hour.

Should you buy the Honor MagicBook Pro?

What do you get when you buy a “Plus” phone? A bigger display, more battery and, often, slightly boosted performance. That’s exactly what you get with the Honor MagicBook Pro, making comparisons to the similarly named MacBook Pro quite unfruitful.

Instead, the MagicBook Pro is a laptop for those who are wooed by the Ultrabook looks of devices such as the HP Envy 13 and Acer Swift 3, but prefer a machine that will be unfazed by even the most intense of productivity workloads.

The MagicBook Pro stands apart from the competition in the display department, with its 16:9 16.1-inch panel. If the idea of a wider dual-window-friendly panel is something you fancy, then Honor’s flagship is just the unique offering to satisfy your needs.