The HP Envy 13 (2020) is one of the best value laptops currently available, pinching fantastic features from rivals that cost a few hundred quid more. With a stellar performance and keyboard and ultra-portable design, the Envy is a great option for students and causal users. thub

The HP Envy 13 (2020) is an absolute bargain of a laptop, sharing just as many high-end features as rivals that cost a few hundred quid more.

Sure, it’s not as eye-catching as the Dell XPS 13 or Surface Laptop 3, but it’s still a good looking laptop. And with a 13-inch Full HD touchscreen, 10th Generation Intel Core processor and a slew of HP privacy features, it’s hard to see what you’re missing out on by going with the Envy ahead of pricier alternatives.

The HP Envy 13 lacks that attention-grabbing design quirk found with rival laptops, such as the edge-to-edge screen of the Dell XPS 13 or the plentiful colour options of the Surface Laptop 3. If the Envy was a crisp flavour, it would be Ready Salted.

That’s not a problem though, as HP has still adhered to modern conventions by maintaining a skinny bezel and minimalist styling. HP has made a number of tweaks to the previous iteration that make this device smaller; shunting the speakers to the bottom while also fitting both the power button and fingerprint scanner into the keyboard. 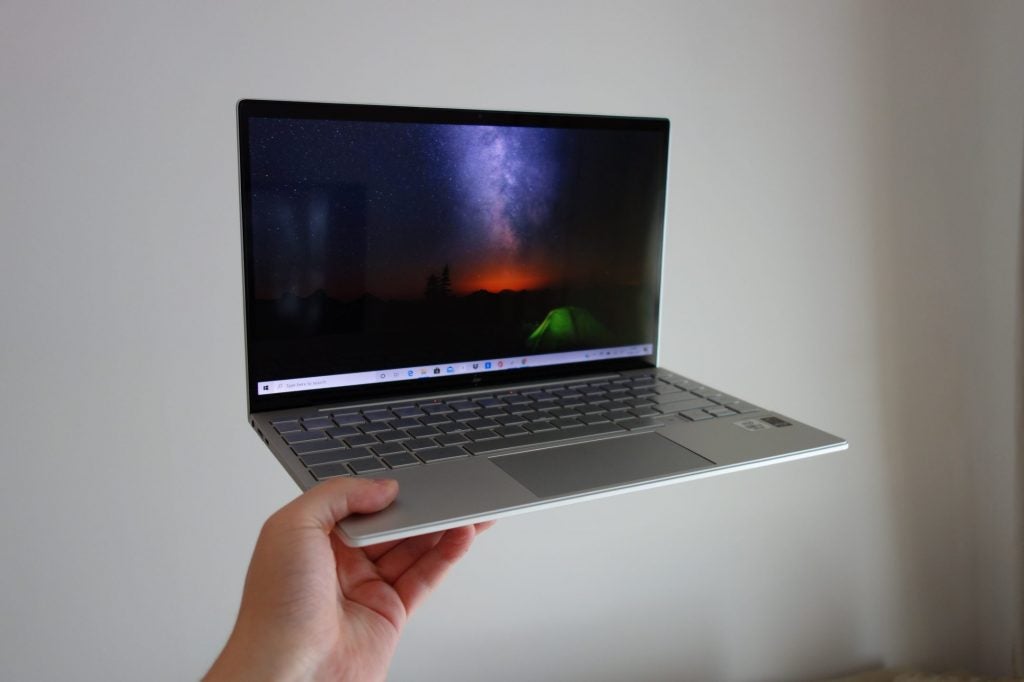 The Envy comfortably merits an ultrabook classification, weighing a dainty 1.3kg. That’s not quite as light as the Galaxy Book S or Acer Swift 5, but it’s still incredibly effortless to chuck in a bag and be on your way.

HP has borrowed a trick from Asus by having the bottom of the screen lift the main chassis up off the desk when fully opened. This not only positions the keyboard at a more comfortable angle, but also ensures better airflow to prevent the internals getting too hot.

The all-metal body feels smooth and sturdy, providing a level of class that plastic simply can’t match. In terms of build quality, the HP Envy 13 is just as good as any other ultrabook. 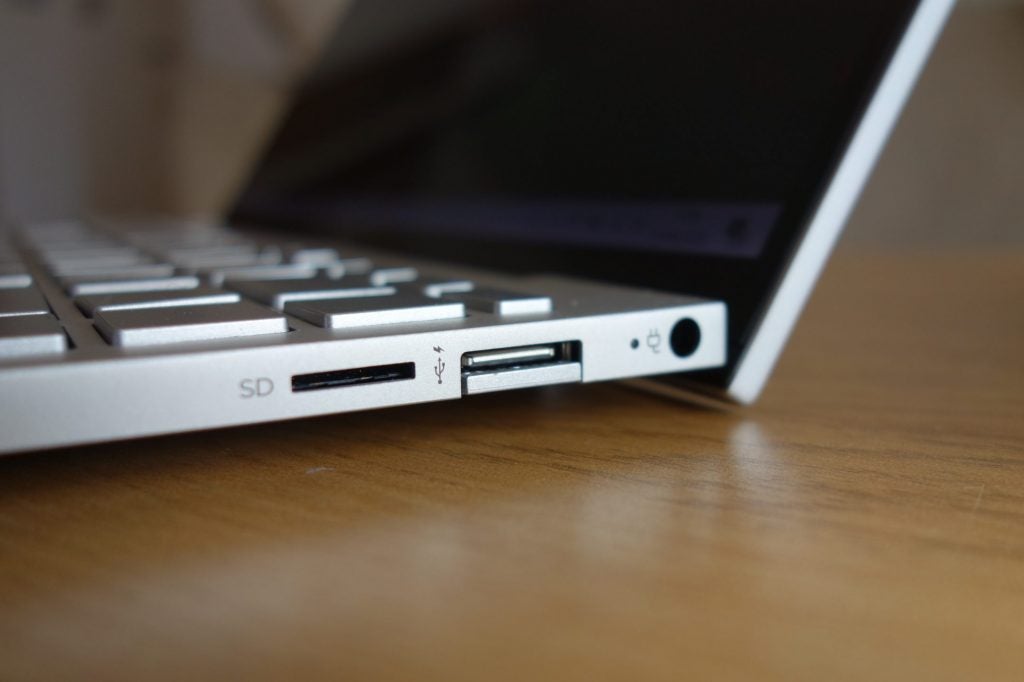 The Envy features a 720p HD webcam, which does not offer the greatest capture quality, but is still more than adequate for business meetings and friend catch ups. What’s more interesting is the webcam kill switch on the keyboard, allowing you to deactivate the camera so you don’t need to worry about someone spying on you.

I’m also very impressed by the Envy’s port offering, featuring USB-C (no Thunderbolt 3), a microSD card reader, headphone jack and 2x USB-A. That means you shouldn’t need any dongles to hook up your old (or new) peripherals which is always an undervalued positive. That said, HP does provide a USB-C to HDMI adapter in the box if you really need one.

The HP Envy 13 (2020) keyboard provided a hassle-free experience when I was hammering out reviews. There’s plenty enough travel here for a comfortable typing experience, and while the keys initially appear small, that’s just an illusion due to the capitalised key lettering.

There are a couple of strangely placed keys that may infuriate some though, such as the single-row ‘Enter’ key and lack of right-sided ‘ctrl’ input. There are some more positive quirks here too, such as light icons to let you know whether the laptop’s speakers and microphone are muted, and dedicated privacy keys for HP SureView and the webcam kill switch. 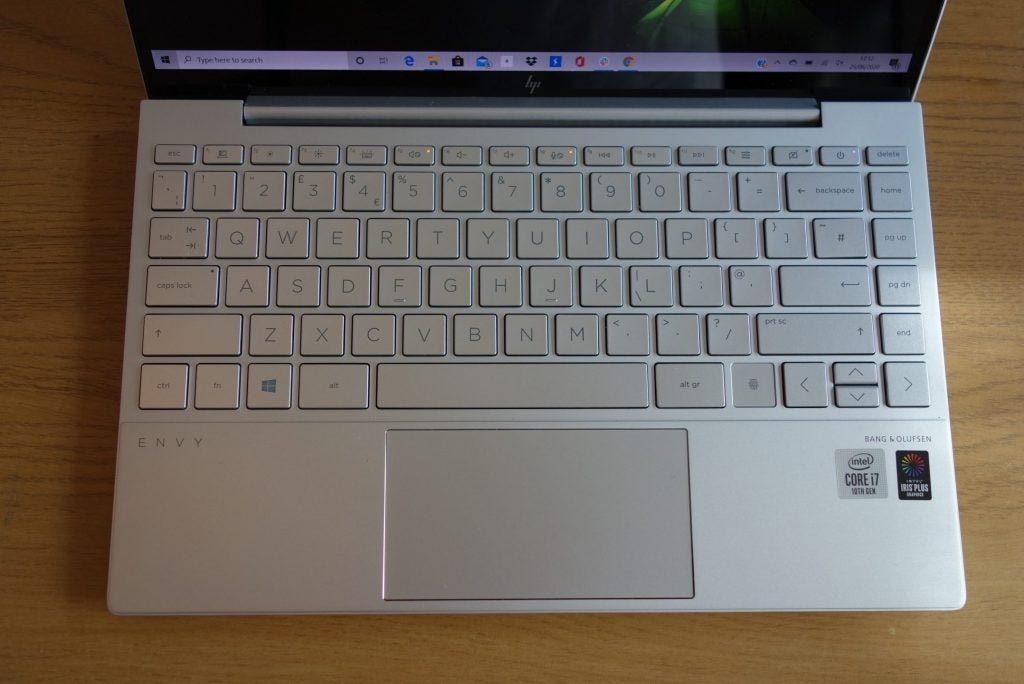 The Envy offers three tiers of brightness for the keyboard backlight, with a dedicated key allowing you to easily crank up the light when it starts to get dark outside, or turn it off completely to save on battery power.

There’s not much to say about the trackpad, other than it’s responsive, smooth to the touch and makes an audible click when you press it down. Essentially, it does the required job with no faff.

The HP Envy 13 (2020) features a 13-inch Full HD touchscreen with a relatively unique quirk called BrightView, which sees the brightness climb as high as 1000 nits. With most laptop screens hovering around 300 nits, the Envy display is significantly brighter than the competition.

The advantage of this is that it’s one of the best laptops on the market to use in dark and gloomy locations. Contrast is also superb at 2248:1, resulting in clear and sharp colours that are great for the likes of Netflix and Disney Plus. There is a slight red tinge to the colour temperature though, which could be irksome for purists. 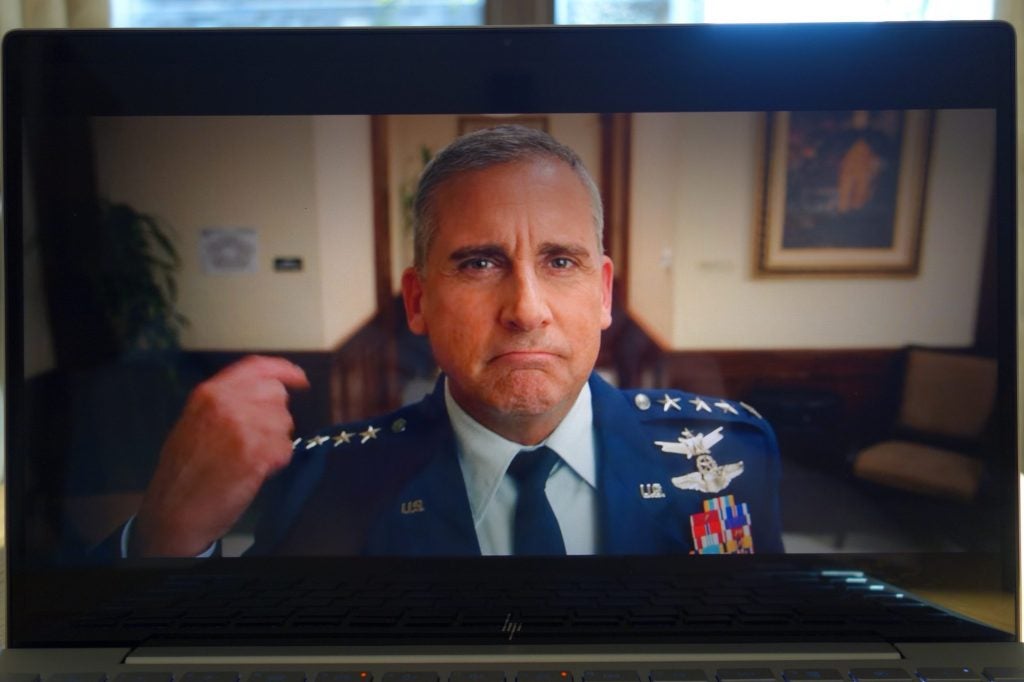 There are some significant drawbacks to BrightView however, as it leaves the screen looking glossy and also makes the panel very reflective – you won’t want to use this laptop outside on a sunny day. I’ve also noticed that the laptop has poor viewing angles; it looks fantastic when viewed straight on, but that quality drops significantly if you tilt the screen back too far or look at it from an angle.

HP has ensured poor viewing angles on purpose to some extent, as it wants to make it as difficult as possible for onlookers to sneak a glance at your screen. There’s even a HP SureView feature that, when activated, will limit peripheral view even further. However, this also turns down the brightness dramatically, so is only really advised if you’re displaying private information.

The Envy boasts surprisingly fantastic colour coverage scores, scoring 96% for sRGB and over 70% for both Adobe RGB and DCI-P3. This means the HP laptop can showcase colours accurately enough for creative work, making it a worthwhile option for entry-level design students. The glossy screen surface and poor viewing angles shouldn’t be forgotten though.

Laptops that cost less than £1000 usually see a hit to performance – not so with the HP Envy 13. Featuring the 10th Generation Intel Core processor, the Envy sees similar specs to the likes of the Dell XPS 13 and Surface Laptop 3.

The base model, costing just £850, sees an Intel Core i5-1035G1. The review model sent my way is a little more expensive and features a more powerful Intel Core i7-1065G7, which is worth bearing in mind for the below benchmark tests.

Results show that the Dell XPS 13 is superior when it comes to multi-core CPU performance and graphical grunt, but the fact that the Envy can remain fiercely competitive despite being significantly cheaper is very impressive.

It also retains a significant performance advantage over the budget champion Honor MagicBook 14, especially in terms of integrated graphics. The Envy 13 uses Intel’s Ice Lake graphics to dabble with casual gaming and entry-level creative work. Keep your expectations low though, as it certainly won’t be able to handle AAA blockbusters or intensive 3D modelling.

The one disappointing element of the HP Envy 13 performance is how loud the fans can get, reaching irritating decibels when running benchmark tests or opening certain applications. It’s probably one of the loudest non-gaming laptops I’ve tested in recent months. You can reduce the fan noise the HP command centre, but at the cost of performance.

While the CPU speeds can not be faltered, the SSD benchmark results were disappointing. With read speeds of 1750 MB/s and write speeds of 1749 MB/s, the Envy isn’t the quickest when it comes to saving and loading data. Storage capacity is at least plentiful, with the base model seeing a 512GB SSD.

The 10-hour mark is the target battery life for ultrabooks these days, but few actually manage to hit it. The HP Envy 13 (2020) lasted 8 hours and 40 minutes in our benchmark test, after reducing the brightness to around 50% and dimming down the keyboard light. 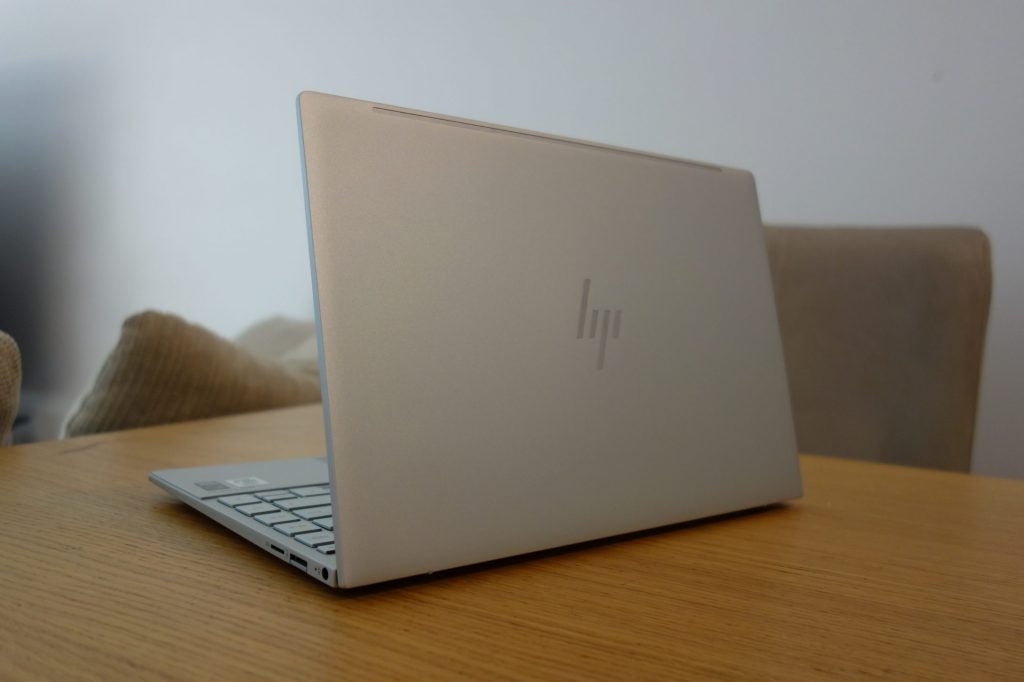 Such a result beats the likes of the Dell XPS 13 2020 and Surface Laptop 3, and should ensure the Envy can easily outlast office working hours and a day’s worth of university lectures.

You’re also able to recharge 50% of the laptop’s tank in just 30 minutes, which is handy if you forgot to plug it in during the night.

Is the HP Envy 13 good for gaming?

The HP Envy 13 lacks a discrete graphics card, and so is only powerful enough to play games such as Fortnite and Minecraft at low graphics settings. We suggest you buy a dedicated gaming laptop if gaming is a priority.

Is the HP Envy 13 RAM upgradable?

No, the RAM is soldered to the motherboard, and therefore not upgradable.

Does the HP Envy 13 have Thunderbolt?

No, the HP Envy 13 does not support Thunderbolt.