The Avita Pura is a fairly limited laptop, but it's an ideal budget choice for those looking for a basic tasker. The base model is the one to look at, with the more powerful option struggling against others at its price point. Chromebooks remain a viable alternative, but the Pura offers the familiarity of Windows, even in S Mode.

Avita burst on the scene last year with the eye-catching Liber 14, making a mark in the mid-range laptop market. With the Avita Pura, the company is shooting for an even lower budget. Does it make the right sacrifices to be a viable machine at such a cheap price?

The Avita Pura looks like a more modest attempt from the laptop manufacturer to grab some attention. The Avita Liber 14 turned heads with its love-it-or-hate-it pattern on the lid, while the Pura sticks one colour from side-to-side. Fear not extroverts because there’s still some pretty eye-catching colour options.

Aside from the design, it’s all about the internals for the Avita Pura. With a base model donning just 4GB RAM, a Ryzen 3 processor and Windows 10 S Mode, it remains to be seen whether the Pura can make it in a world of cheap Chromebooks and strong mid-rangers.

The design of the Avita Pura exudes basic yet still manages to look modern. The Pura definitely beats out the likes of the Acer Aspire 5 in terms of looks, especially when you factor in the huge number of colour options, with the likes of pink, blue and yellow all available – finding a retailer that stocks your preferred colour choice is no easy task though.

While donning a plastic body all around, Avita has given the Pura an almost brushed metal look that definitely helps with the overall appeal. 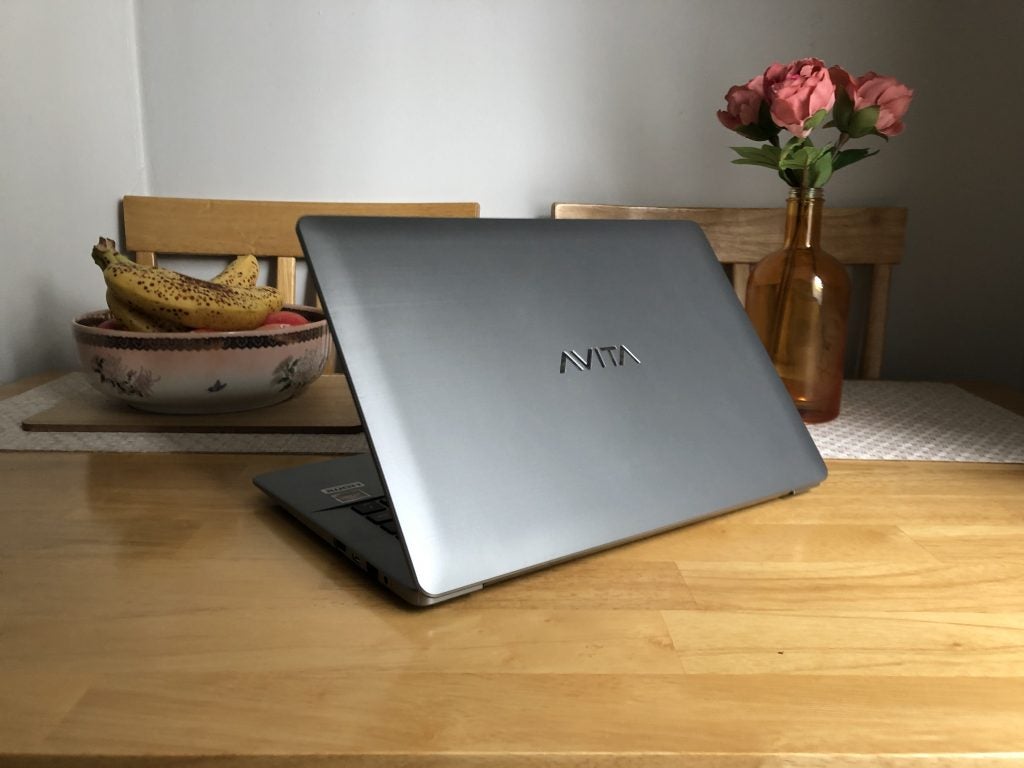 Open it up and this feat is less impressive, with a keyboard that look like it’s from a bygone era. Nevertheless, it is far from offensive to the eyes – a booby prize which is reserved for the rather thick bezels.

The looks may leave something to be desired overall, but the build is mostly impressive. All-plastic laptops can feel rather flimsy but, especially when closed, the Pura feels much more sturdy than a £300-odd price point may suggest. 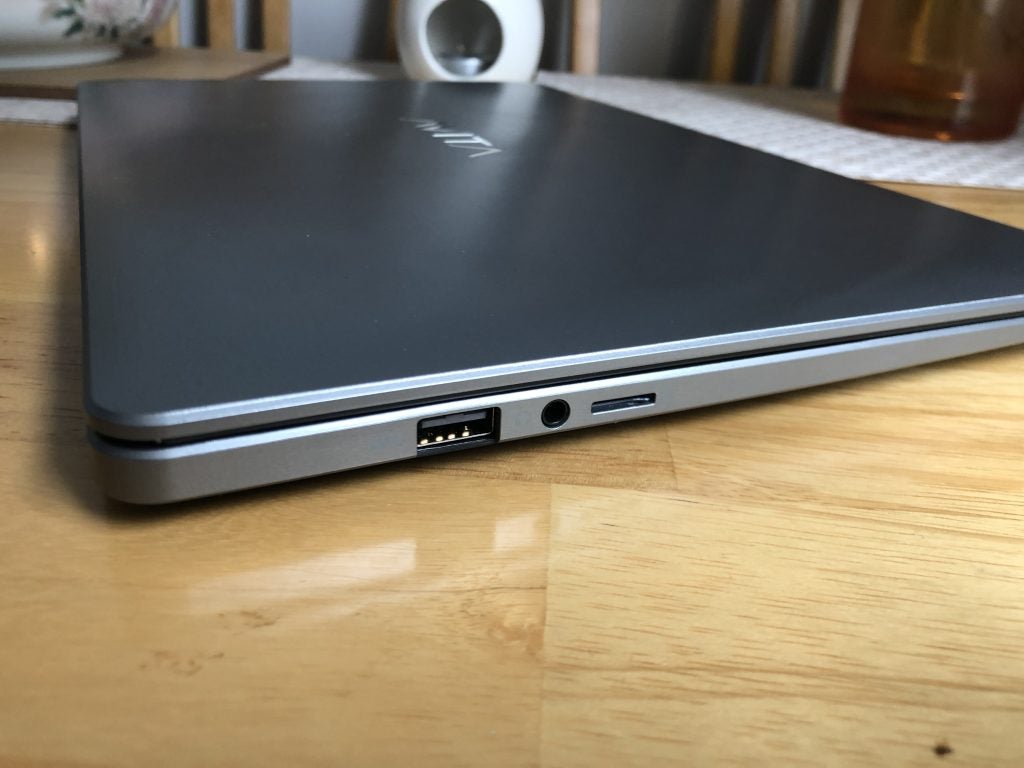 The story is a little different when you open up the Avita Pura, with a pretty flexy display and moderately creaky movements. Thankfully, the flex doesn’t extend to the keyboard.

The Avita Pura definitely succeeds in the port selection stakes, offering two USB-A ports, one USB-C, an HDMI, a MicroSD (for up to 128GB of expandable storage) and a headphones jack. Not too shabby at all, even if Thunderbolt is absent.

Avita Pura keyboard and trackpad – Bang for your buck

Keyboards on sub-£400 laptops often seem like one of the most common sacrifices to keep the price down – not so for the Avita Pura.

The font may look a bit tacky and the material of the keys is even a tad coarse, but the typing performance is perfectly fine in everyday use. 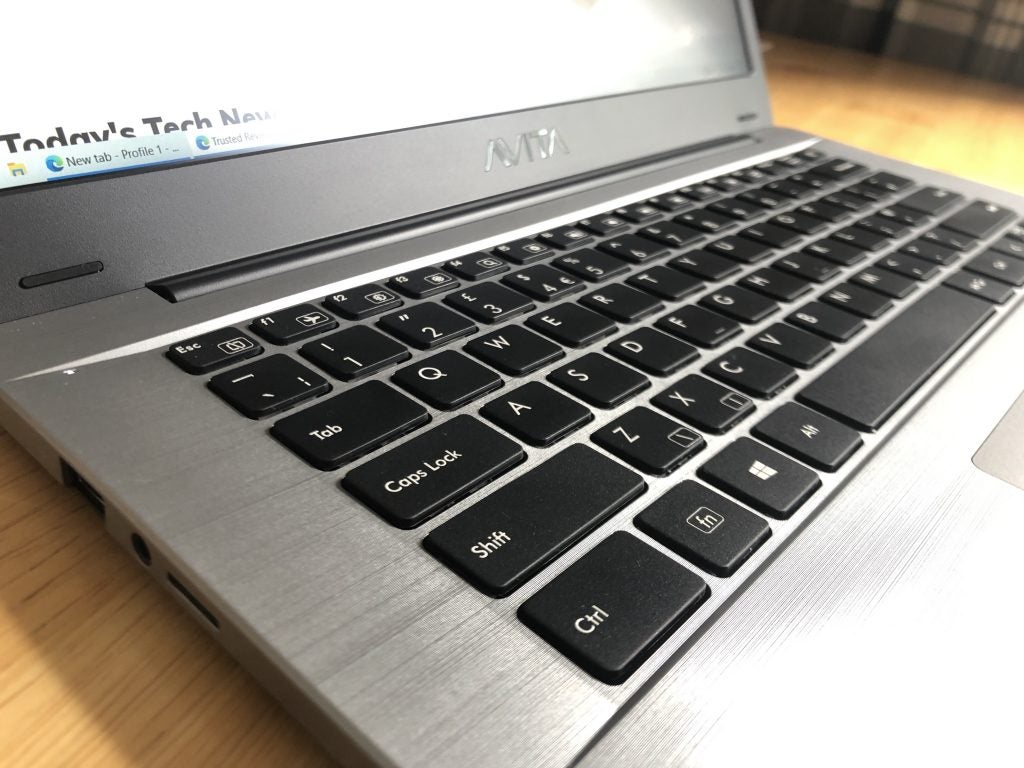 The travel is nothing to type home about, but it definitely doesn’t lead to fatigue and there’s a pleasing, albeit minor, click to each key press.

The main fault of the keyboard comes down to the size of the keys – they aren’t the biggest. It wasn’t a problem most of the time, but typing in full flow did sometimes lead to a feeling of getting close to the edge of a key. These small keys are something to bear in mind if you’ve got big hands but it won’t be a big problem for everyone else.These’s no fingerprint scanner either, but that feature isn’t expected in such a budget-friendly laptop. 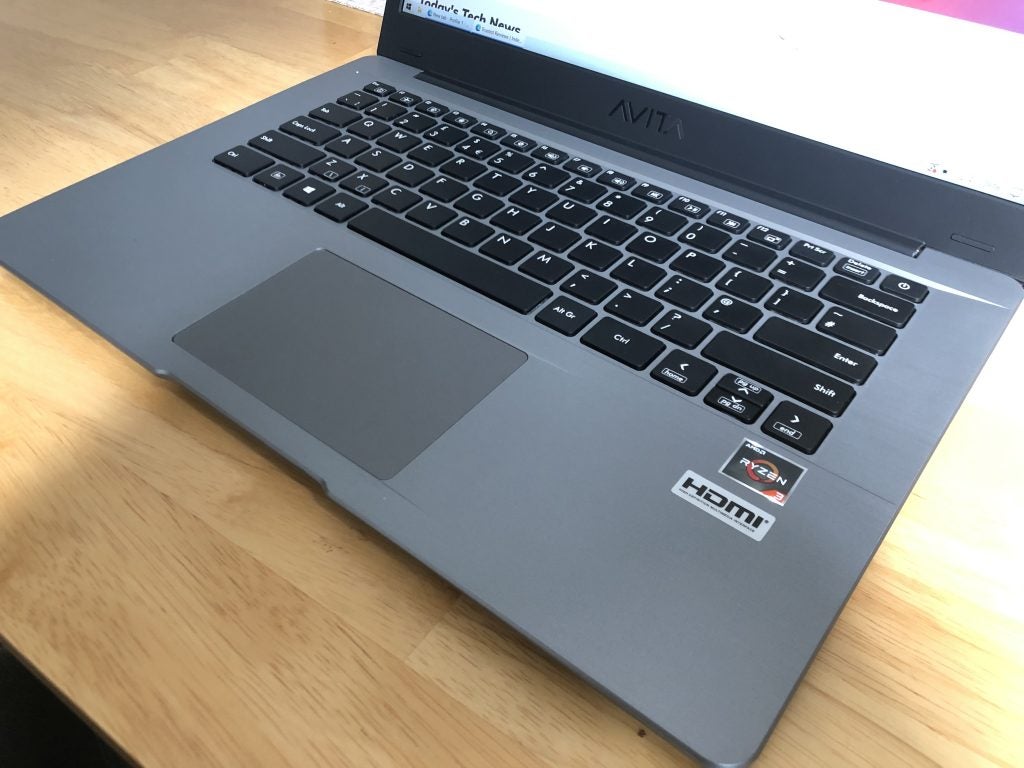 The Pura trackpad is a functional one, having decent travel from corner-to-corner and not sporting any obvious downsides. A larger trackpad would be a welcome improvement and the click isn’t wholly satisfying, but, it’s more than passable.

As with much of the Avita Pura, the TFT display doesn’t wow in terms of quality. But, it’s the value for money offering that’s impressive.

Frequent watchers of Netflix, YouTube and the like may want to look elsewhere for a higher quality viewing experience but, for basic word processing and web tasks, the display is far from unsightly. 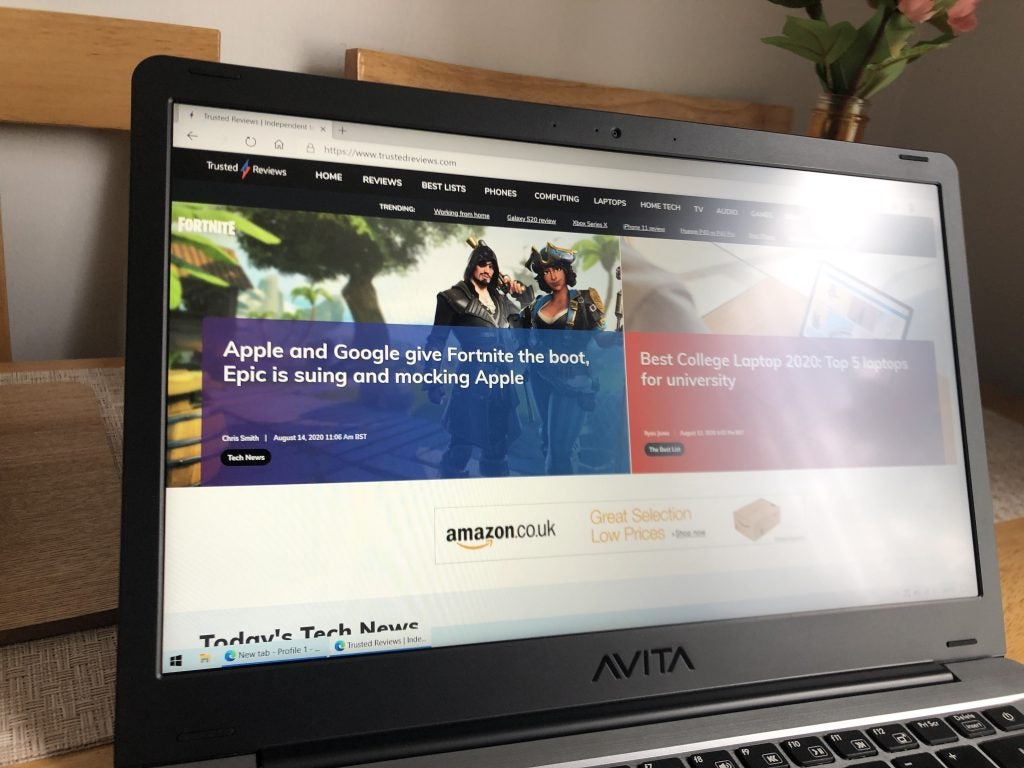 You even get a Matte display to obscure awkward light sources. Despite the Matte display, the low brightness of this laptop means you probably won’t want to pick it up if you do a lot of work outside.

The Avita Pura is a very basic laptop, especially when sporting the Ryzen 3 3200U processor and 4GB RAM as our review model did. This is not a machine for hardcore productivity work and it is definitely not a machine for any kind of gaming or creative work since it lacks a dedicated graphics card.

However, if your job involves only having a couple of programs open and not opening a plethora of tabs (say over 6 or 7) then this could do a decent work-from-home job.

The ideal user for this laptop, however, would be as a first laptop for an 11-16-year-old, moving up from one of those tablets with delightfully colourful “childproof” cases or a light user who just wants a laptop for some basic everyday browsing and word processing task. 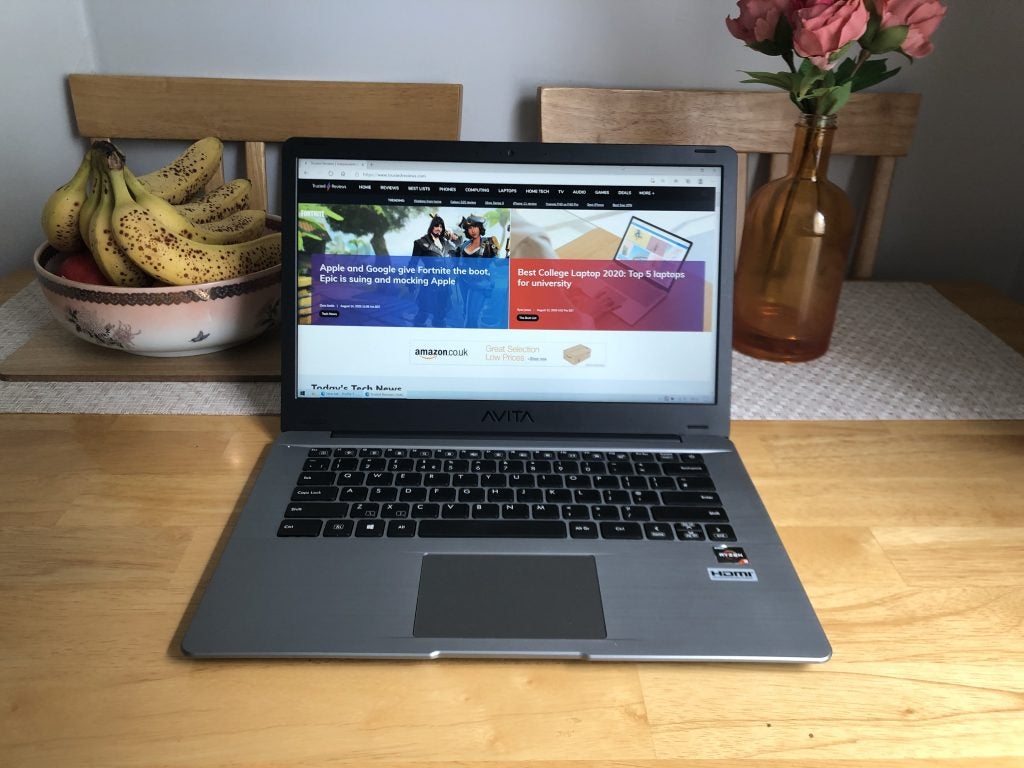 Bear in mind, the Avita Pura is also restricted by Windows 10 S Mode. This is a necessity due to the basic components inside this device. S Mode means you can’t download programs from outside the Windows Store such as Google Chrome, Sky Go, full Adobe apps and more. So, if you aren’t happy sticking to Microsoft Edge (which is now new-and-improved) and a selection of apps primarily centred around Microsoft’s own offerings – like Office – then you’ll need to look elsewhere.

You do have the option to upgrade from S Mode into full-fledged Windows 10, but it’s in the more tailored mode by default for a reason. Upgrading will see the performance drop significantly, with sluggish loading times for web browsers and applications, and so we really don’t recommend it. If you’d like to ditch S Mode then this device likely isn’t for you.

You can pick up a model with an AMD Ryzen 5 3500 for £100 more and a bit of a performance boost. However, this model is still limited by 4GB RAM and the price point is then getting dangerously close to much better performers like the stellar Honor MagicBook 14, making the Ryzen 5 version a hard one to recommend.

The SSD storage isn’t exactly plentiful either, with most retailers shipping it with 256GB capacity. That’s not a huge amount, meaning you’ll likely have to stick to cloud saves if you intend on using it as a student or office laptop. The official site says you can get models with up to 512GB storage, which is far more reasonable, but finding such a model in the wild is difficult.

The battery life of the Avita Pura is maybe one of the more disappointing aspects. As a device running with fairly limited hardware, you’d be forgiven for expecting the battery would be able to run a fair bit longer than it does.

Our benchmark results showed the Pura to last just under seven hours. Seven hours for a modern laptop isn’t that bad compared to more expensive laptops, but these are often devices with much fiercer components and fancier features. 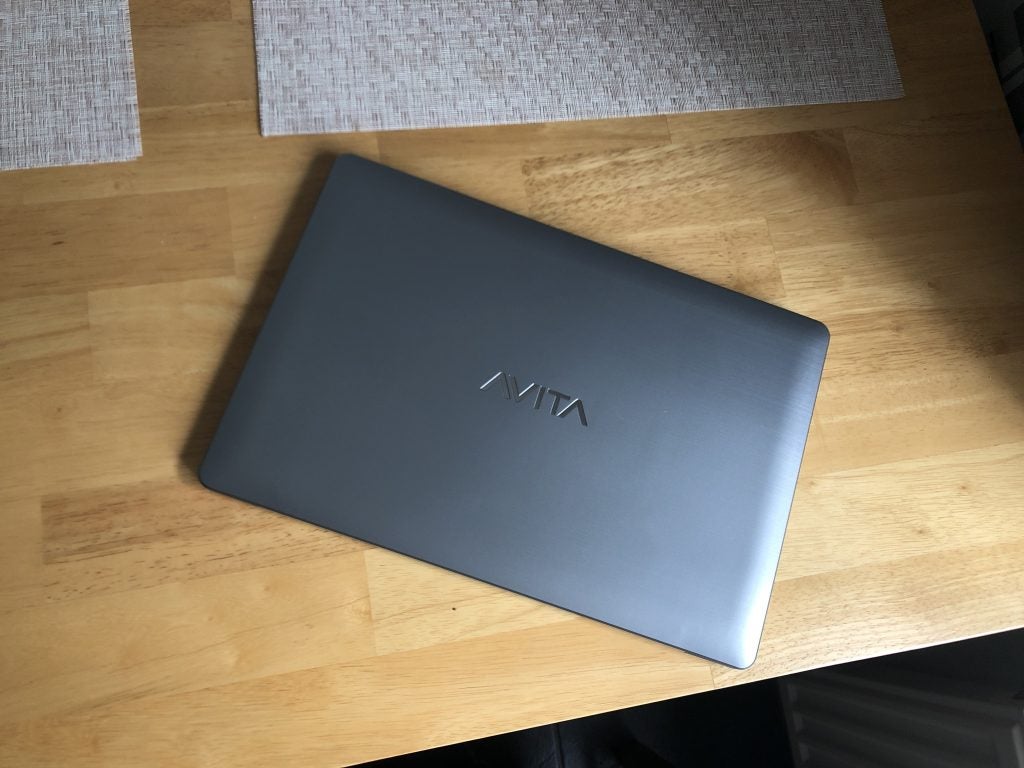 While the cost could also be a factor here (with the low price being the main appeal of the Pura), a longer battery does feel like a necessity for such a basic device, allowing it to be an afterthought for the user when the time does come to put it to work.

Should you buy the Avita Pura?

Avita Pura doesn’t have a whole lot of competition in the budget Windows laptop space. At this price, your only real alternatives are Chromebooks.

Devices like the Acer Chromebook 315 features Google Chrome OS and, for £60 less, likely offers snappier performance. However, the Pura offer superior quality overall, including the keyboard and more lightweight build.

The Avita Pura is a fairly limited device, but it could be an ideal budget choice for those looking for a basic tasker. The base model is the one to look at, with the more powerful option struggling against others at its price point. Chromebooks also remain a viable rival but the Pura offers the familiarity of Windows, even in the app-focused S Mode.