The Avita Liber 14 performs stronger than its middling specs suggest and – if you buy it as a laptop for simple tasks – you won’t be disappointed. However, the competition for more established brands comes in at a lower price point, ensuring the Liber is a style-over-substance option.

What is the Avita Liber 14?

The Avita Liber 14 is a bit of an unknown quantity, with Avita being a relatively unknown brand in the laptop market. On the face of it, the Avita Liber 14 looks like a laptop with budget performance housed in a much more premium-looking body.

The Avita Liber looks to attract attention with some extravagant lid designs, which may be of massive appeal to some, but likely a huge turn off to others. The competition in the £500-£700 laptop market is quite tough now so aesthetics likely won’t be enough – the specs will need to stack up. 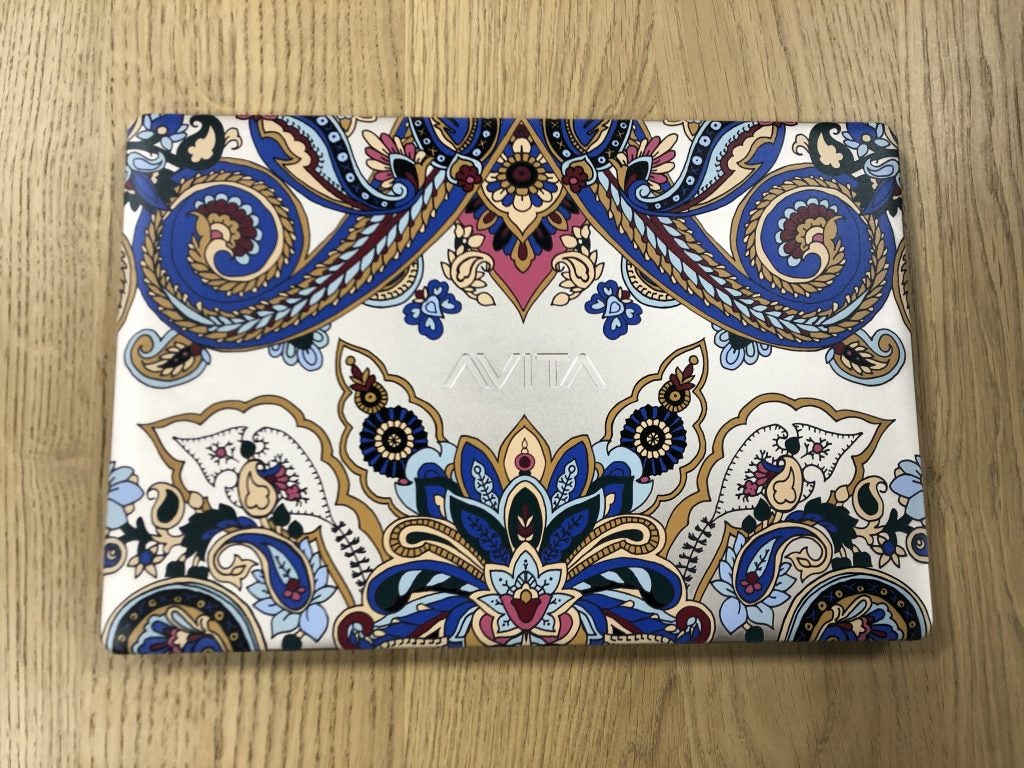 Open up the Avita Liber and you’ll be impressed by the look and feel of the aluminium body. Close the Liber and you’ll be greeted by a striking pattern. The unique designs offered on the Liber might feel like a nice way to jazz up your laptop – however, our “Ornament on Gold”  review model definitely sits on the garish side.

The design outclasses most laptops at a similar price, primarily due to its aluminium build. The Liber is just 5mm thick and weighs under 1.5kg – for its price, it’s a marvel.

Quality isn’t present in throughout this laptop. When you move the laptop screen back and forth, a plastic-y creaking can come from the hinge. The sound is disconcerting but it doesn’t sound like something to worry about in terms of potential damage being done to the device.

The port offering on the Avita Liber is decent too. A USB-C 3.0 offers speedy charging, while two 3.0 USB ports allow you to hook up peripherals. You also get a Mini HDMI port, as well as microSD card reader, both of which should come in handy for students. 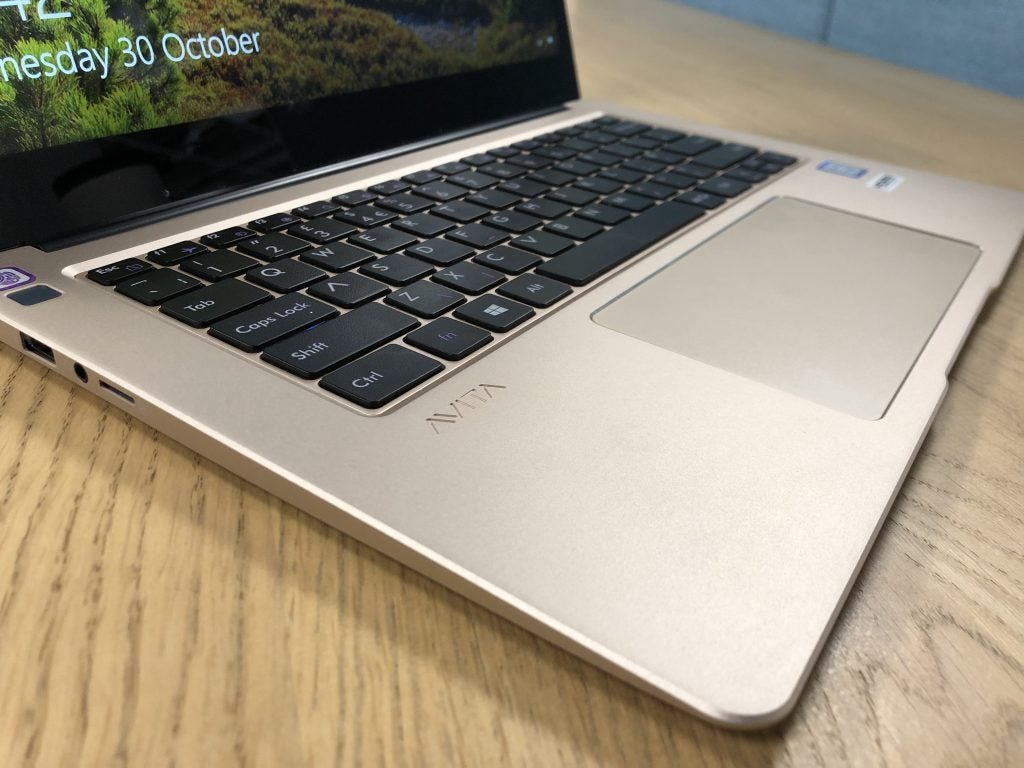 When it comes to typing comfort, the Avita Liber provides a pleasant experience. One minor criticism would be that it can feel a little spongy but you easily forget about this if you are in a flow.

With a laptop like this, you are far from the clicky experience of a mechanical keyboard. However, typing does have a satisfying click without being overly loud. 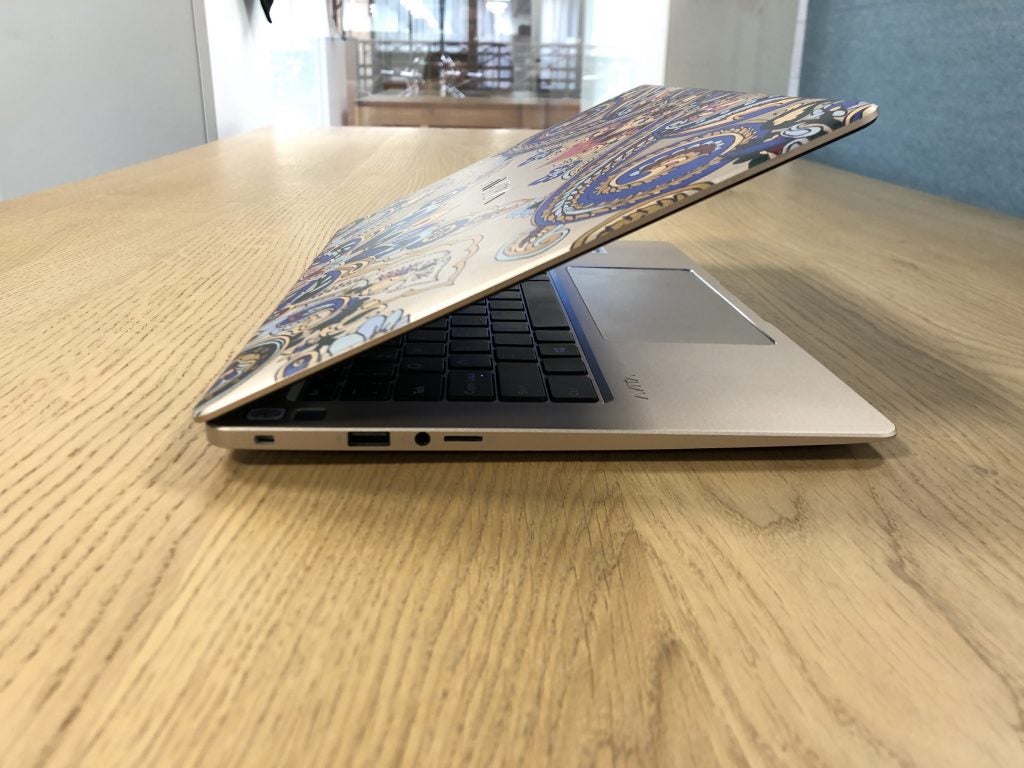 The Avita Liber sports a 1080p display that is pretty impressive for the price – you’ll struggle to find better panels on a similarity priced budget laptop. The display does have a relatively thick bezel surrounding it though, which does detract from the sleek look of much of the laptop.

The specs of the Avita Liber display do reflect the decent performing visuals. I recorded a max brightness of 366 nits and a min brightness of 0.35 – giving a slick 1024:1 contrast ratio. The colour temperate of the display, meanwhile, is at 7098K – meaning natural whites may look slightly on the blue side, but it’s not noticeable to the naked eye.

For colour coverage, the Avita Liber had 82.7% sRGB, 60.5% Adobe RGB and 68.0% DCI P3. These results prove the screen has a great colour coverage for digital art and animations, although still isn’t very accurate for photo-realistic images, just like any other budget portable. 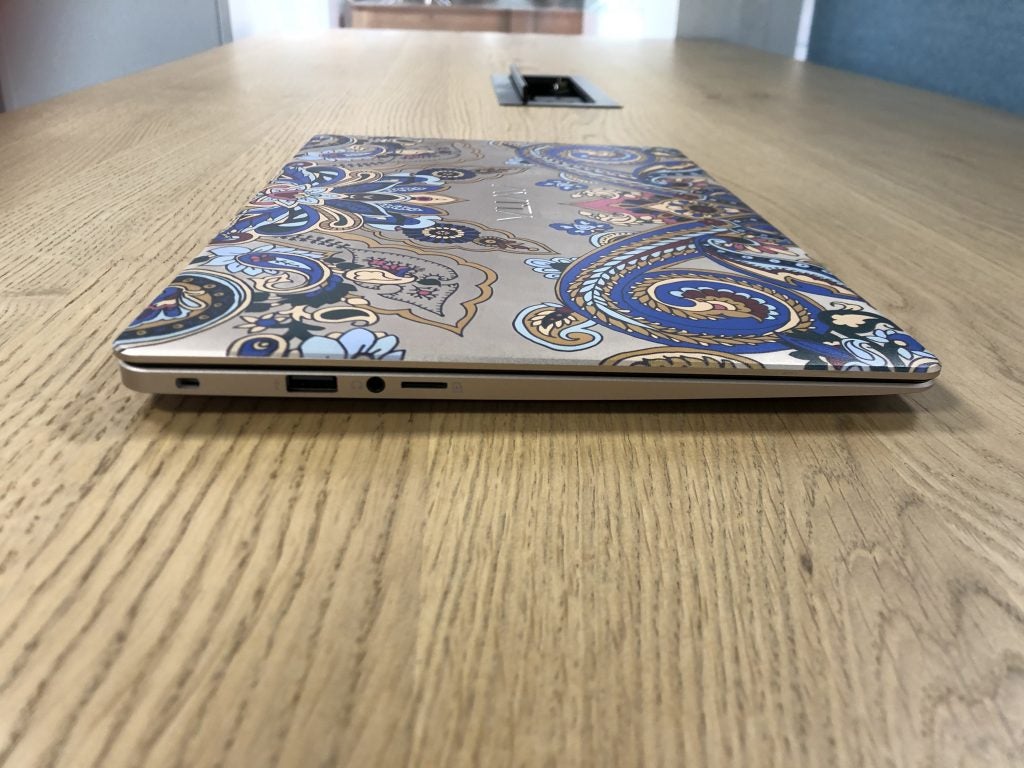 My first experiences of the Avita Liber left me quite impressed. For most basic web-browsing and word-processing tasks, it did its job – exactly what consumers buying this device would and should expect.

After further use, my positive view of the Liber made a bit of a u-turn. The strain I put on the laptop hadn’t increased much, but venturing above seven or eight tabs in Chrome began to affect performance.

The laptop runs an Intel Core i3-8130U processor and comes with 4GB of RAM. That’s on the low-end of the performance spectrum for modern day laptops, with the Avita Liber 14 being more comparable to a Chromebook than a premium laptop like the Dell XPS 13 2 in 1. Our holistic test in PCMark 10 gave the Liber a score of 2875 – also gaining 3979 and 7407 in our Geekbench 4 single-core and multi-core tests respectively.

These stats comfortably beat competition from the likes of the Acer Swift 1. However, if you put them up against a stronger rival like the Lenovo Yoga 530, the difference is negligible but does fall slightly in favour of the Liber for basic tasks. However, the Lenovo Yoga 530 comes with 8GB of RAM which would’ve helped greatly with the issues we’ve had with Liber’s multi-tasking.

The 128GB SSD meanwhile, doesn’t provide a huge amount of storage, but you can buy configurations up to 512GB. The read and write speeds are underwhelming at 517.70 MB/s and 241.60 MB/s too, resulting in extended periods of waiting time when loading or saving data files. This means you’re better off using the cloud as much as you can for data transfers instead of storing files directly on the laptop.

The battery life of the Avita Liber performed quite poorly in our Powermark test. The Liber only came back with a score of four hours and 13 minutes.

The length of battery life looks even worse when compared to competitors like the Lenovo Yoga 530 (seven hours and 26 minutes) and Acer Swift 1 (six hours and two minutes).

We did get some better results in our real-world testing – just below six hours – but the length is still cause for concern if you plan on using the Liber out and about without access power. Should I buy the Avita Liber 14?

The Avita Liber 14 offers a design that feels a cut above the competition with the aluminium build and a thin form-factor making it an ideal choice for students.

The Liber’s processing power is comparable to rivals, but is usurped by its paltry RAM offering. The battery life of the Avita Liber is also a black mark on its resumé.

If the level of performance of the Liber sounds disconcerting, you should probably opt for our best budget laptop, the Lenovo Yoga 530. The Yoga 530 with 8GB RAM is priced at around £629 in comparison to the Avita Liber 14’s £529 – a worthy investment for the bump in performance.

But if you love the quirky design of the Avita Liber 14 and won’t be pushing it beyond simple tasks, then it could still be a worthwhile purchase for students and the like at this price.

The Avita Liber 14 performs stronger than its middling specs suggest and – if you buy it as a laptop for simple tasks – you won’t be disappointed. However, the competition for more established brands comes in at a lower price point, ensuring the Liber is a style-over-substance option.