An amazing voice assistant and great audio, but the Home Max lacks multi-room magic to make it perfect.

With the Google Home and Google Home Mini, the search giant has basic home control and smart-assistant features covered. The Google Home Max is a rather different beast, then, designed to be the only music speaker you need. This is more an Apple HomePod product than just another speaker to compete with Amazon’s growing line of Echo devices.

Powerful audio, a flexible design and integration with Google Assistant make the Home Max a force to be reckoned with. However, a sky-high price and sub-Sonos multi-room capability mean that this one won’t be for all.

The Google Home Max sports a similar design to both the Home Mini and Home, with a soft-touch plastic body (Chalk and Charcoal models available), and a fine material front. The most notable difference is the size: the Home Max is huge at 337 x 190 x 154mm. Weighing 5.3kg, it’s no lightweight either. In this regard, the Home Max has more in common with the Sonos Play:5.

The Home Max will require plenty of space, making it better-suited to larger rooms. The smaller HomePod and Sonos One speakers are far easier to place.

In the box Google provides a magnetically attached rubber pad, which can sit on the bottom of the Home Max or on its side, letting you place the speaker in portrait mode. This will save a bit of space, but comes with one major downside: portrait mode disables stereo mode, so you’ll lose some audio width using it in that mode.

Moving the speaker slides it around on the rubber mat, often leaving it behind. Once you’ve placed the Home Max, be careful if you move it. 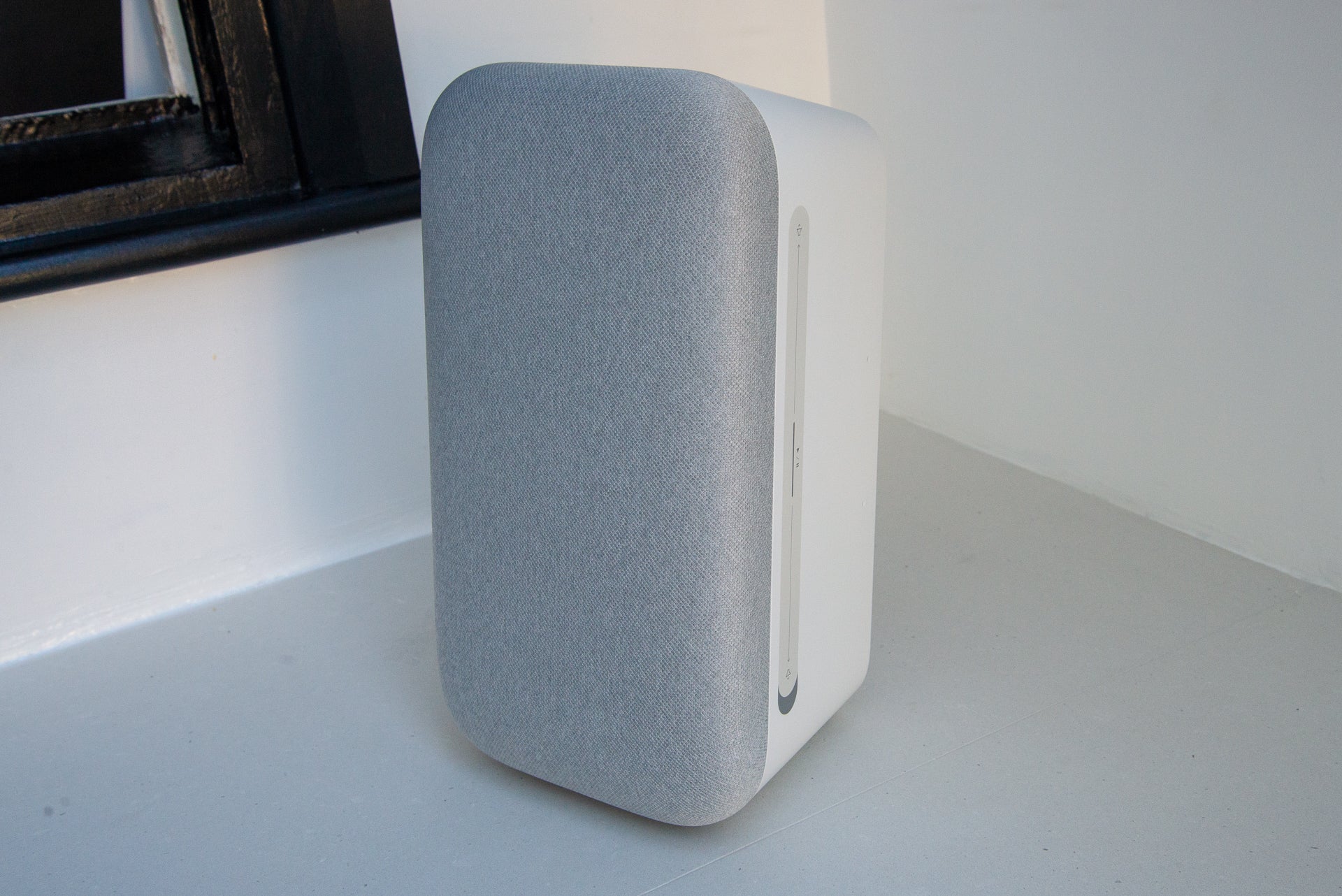 On top is a capacitive touch bar, with sliders to increase or decrease volume, and play/pause music. A track-skip button or even a double-tap-to-skip function would have been welcome, but at least the basics are available. 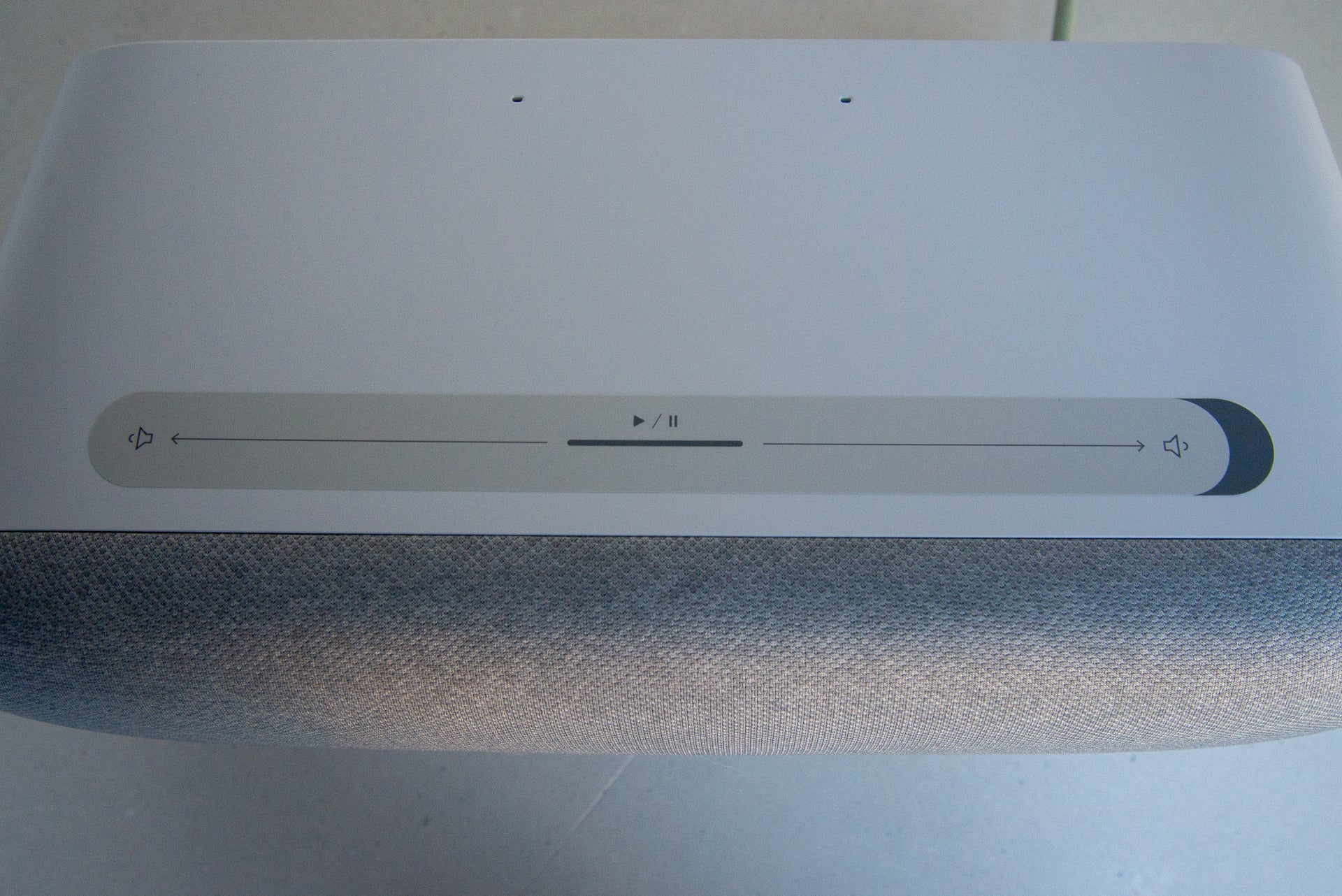 At the rear of the Home Max is a USB-C port, which you can use with an Ethernet adapter if you want to use a wired connection. There’s also a 3.5mm audio input, so you could hook up a record player for example, and there’s Bluetooth as well. 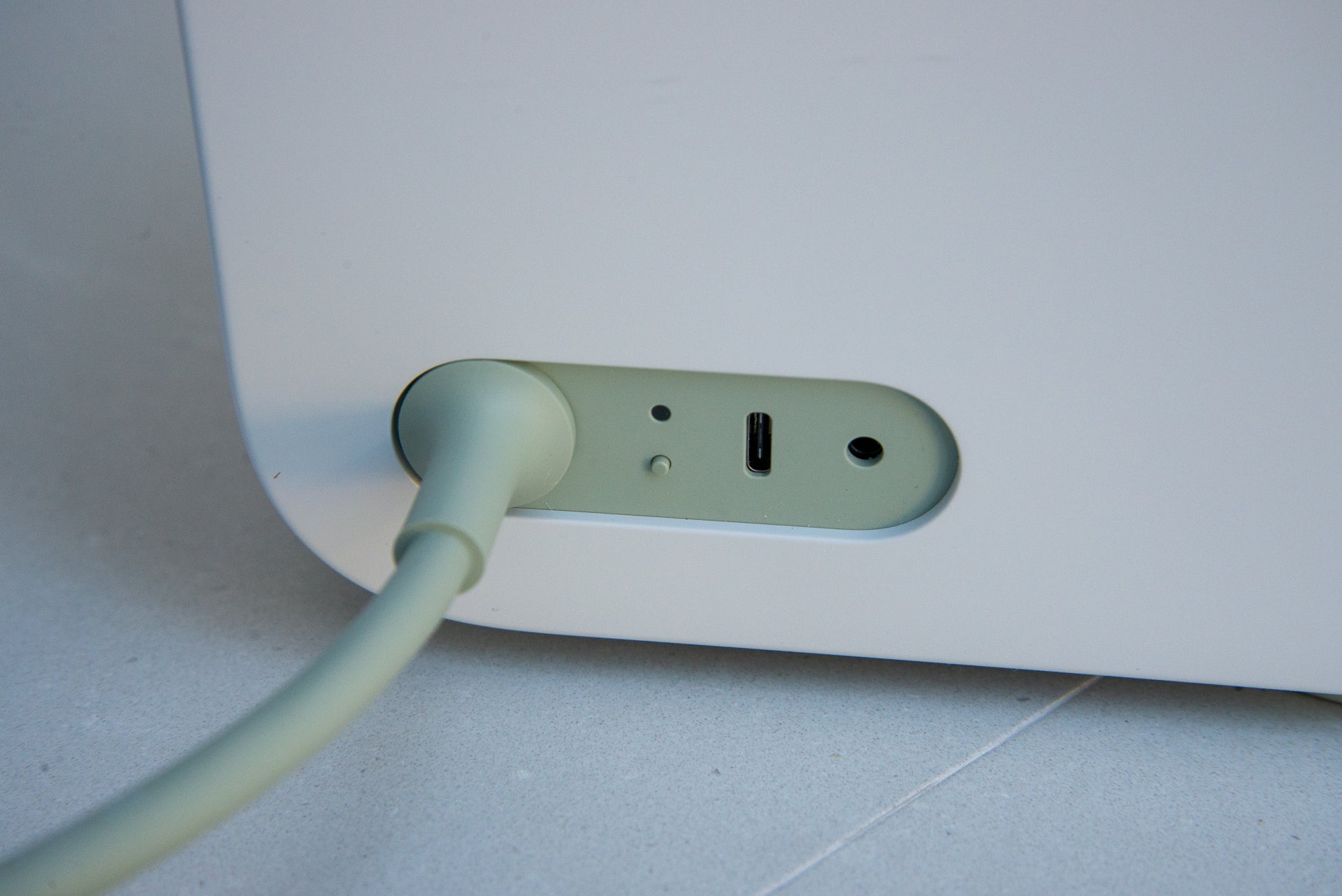 The size of the Home Max is mostly a result of the internals: two 4.5in high-excursion woofers and two 0.7in custom tweeters. That’s a combination that can give the Home Max proper stereo sound.

Google has fitted the Home Max with six microphones – two on the top, two on the side (or top when used in portrait mode), and two hidden behind the fabric front.

The microphones are also used for Smart Sound, where Google monitors the Home Max’s position and then adjusts the equalizer settings to match the acoustics of your room. Google launched the Home Max first, but the Apple HomePod has similar technology.

Specs are one thing, but it’s actual performance that matters. For the large part, the Home Max is rather lovely. Certainly, if you want to go all out, the Home Max is super-loud. It’s bone-crunchingly, room-fillingly loud in a way that the HomePod isn’t. If you want something to fill a big space then the Home Max should sit somewhere near the top of the list.

But, as the Home Max gets to top volume, it starts to become a little harsh. The balance between the bass, mids and treble becomes a little confused. It isn’t horrendous, but the Home Max loses a little of its finesse and poise – which isn’t an issue for the HomePod. 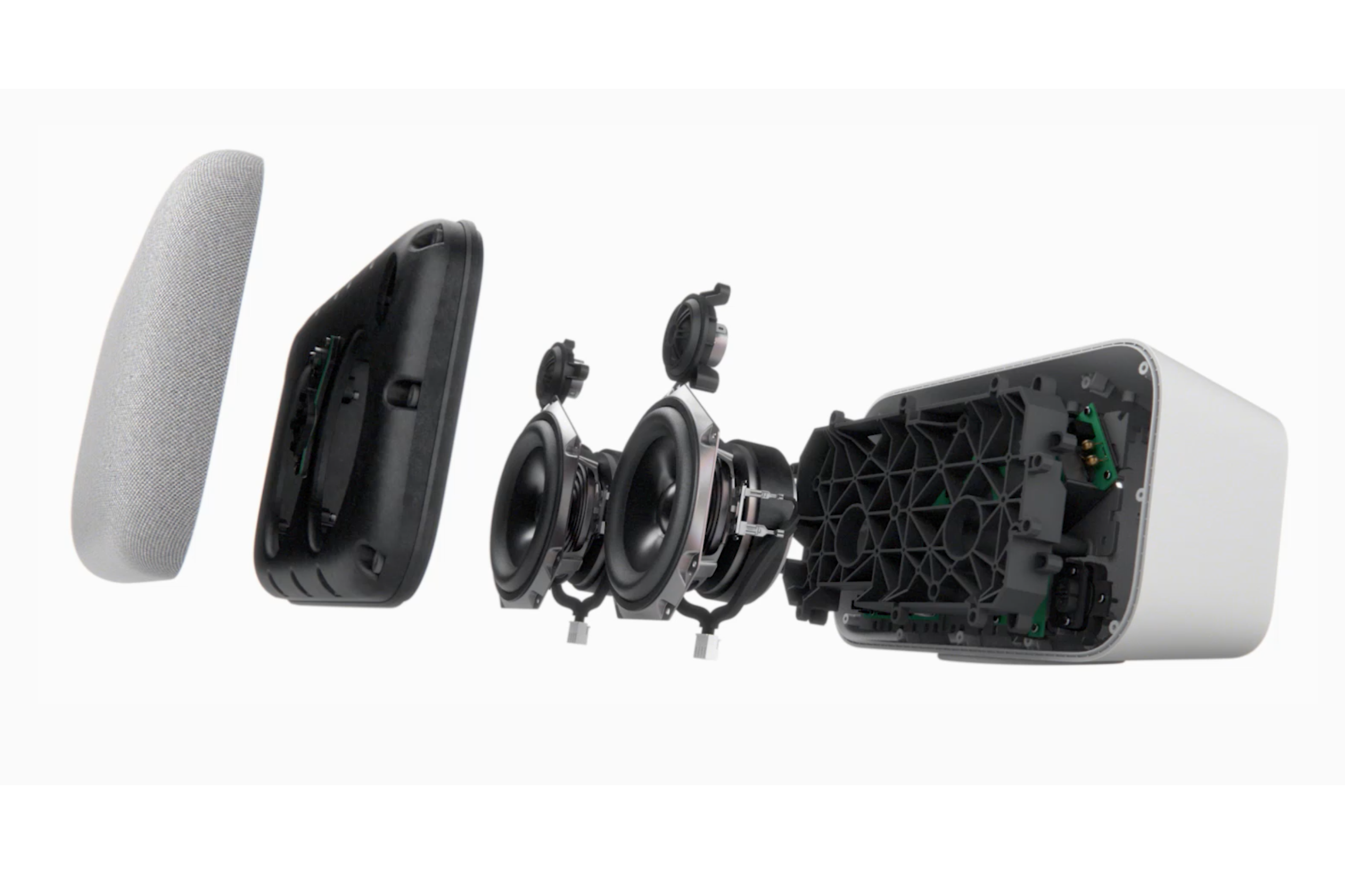 At lower volumes, it’s a closer competition. The Home Max’s powerful bass shines through, giving tracks that extra push. Listen to something bass-heavy, such as OK Go’s ‘This Too Shall Pass’ and you can feel the bass going through you.

There’s poise and detail, too. Switch to a more gentle track, such as Johnny Cash’s cover of ‘Hurt’, and you can hear his fingers slide over the guitar, and the twang of the strings.

Stereo separation isn’t as good as you’d hear with dedicated speakers for left and right, but the Home Max does a fairly good job. Put on ‘Enough Space’ by the Foo Fighters, and the opening guitar swirls from left to right.

Overall, though, the Home Max remains quite a directional device. Place it in the corner of the room, and you know where the sound is coming from. There isn’t the same level of 360-degree sound as the HomePod puts out.

Smart Sound does a good job of balancing the audio, although extremes can push it out. Move from a large room to a smaller one, and you won’t be overwhelmed by bass. Lugging the Home Max around my house, it adapted and coped well with every room – but Smart Sound does have its limitations.

Place the Home Max on an enclosed bookcase shelf and the audio – in particular the high-end – sounds a little harsh. The speaker struggles to cope with the echo.

That’s not to say that the HomePod is better, just different. Placed on a clean surface, the louder, more powerful sound from the Home Max will be preferable to some people; the HomePod’s more balanced and poised sound, and smaller dimensions, make it a better choice for others.

Setup is easy. Just plug in the speaker, open the Google Home app and your Home Max should be found automatically. A couple of taps later, it will be on your home network. Once connected, your speaker is ready to go. If you already own other Google Home devices, you’ll have the same features and can turn on the same Voice Match options to support multiple Google accounts.

My full guide to Google Assistant has far more information on what Google Assistant has to offer, but it’s worth reiterating just how good it is. Ask Google to play a track, album or playlist, and you don’t have to be spot on – unlike with Siri and Alexa. Instead, Google works out what you meant to say. For example, I asked, “OK Google, play my test playlist from Spotify”, and Google correctly played the playlist that I’d actually called “testing”.

When it comes to home control, Google Assistant is only second to Alexa for total product support, but the gap is narrowing. Most major products are supported, from the Nest Thermostat to Philips Hue bulbs. Now, you can place a Google Home device into a room with other devices, so you can just say something like, “OK Google, turn on the lights.” Google then understands which lights you’re talking about.

In terms of answering generic questions, giving directions, and looking up local businesses, the Google Assistant is ahead of the competition. Plus, you can make local calls on it for free, too. The only annoying thing is that Google Assistant still can’t look at G Suite calendars.

The Google Home Max works brilliantly with the Google Assistant. It picked up my voice commands, even when spoken quite softly with loud music playing, and from pretty much any angle. If you want privacy, there’s a switch on the back of the speaker to turn off voice recognition. 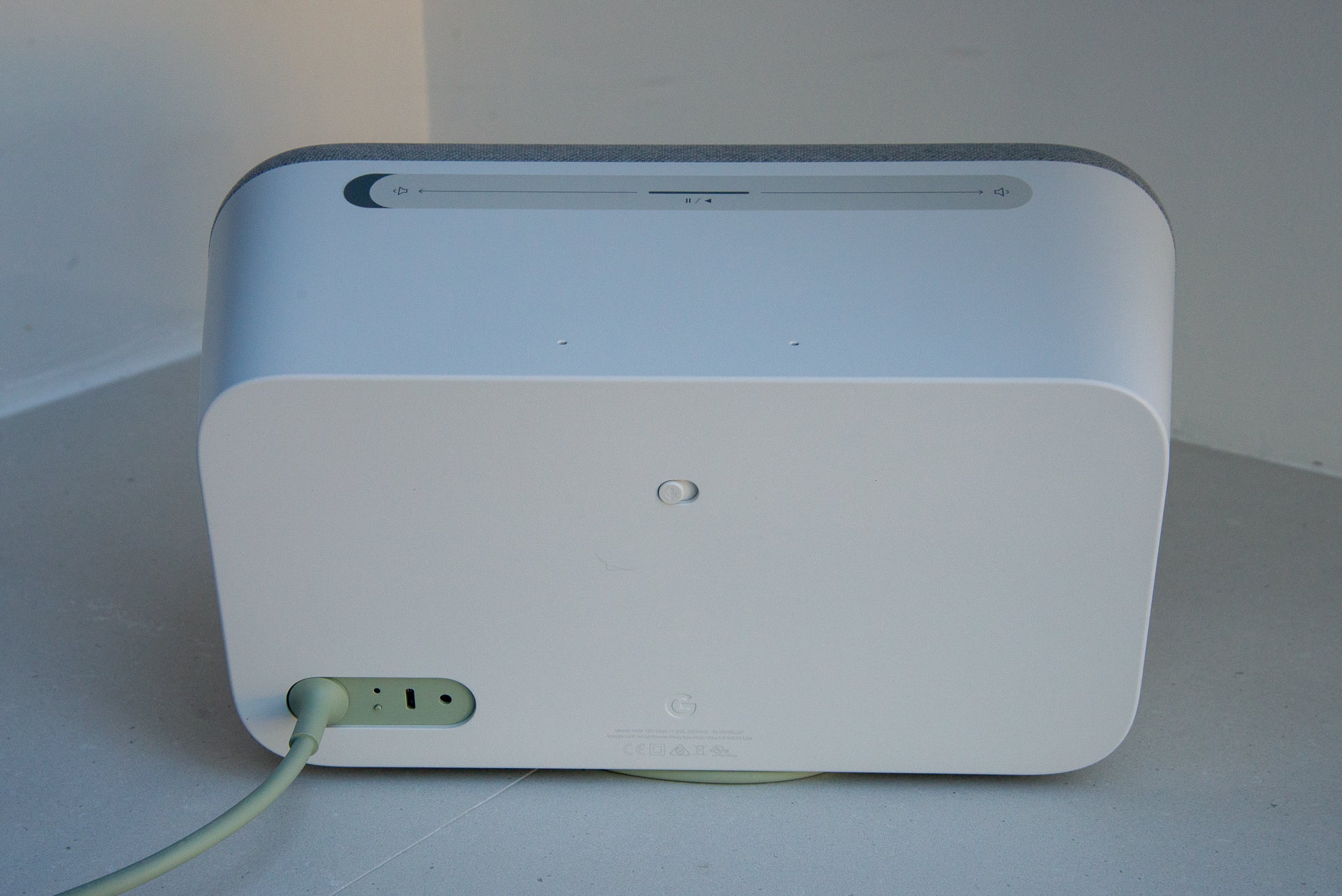 Multi-room is available, but it’s fiddly to set up. You’ll have to create a group in the Google Home app and pick which speakers you want in the group (you can mix and match any Google Chromecast devices you have on your network). This is nowhere near as fluid as grouping and ungrouping with Sonos, or even the Apple HomePod.

As well as multiple Google Case speakers work when put together, the problem with Google’s ecosystem rears its head when you want to play multiple tracks in different rooms. You can only use your account in one place. That’s a limitation that isn’t an issue with Sonos, where a single Spotify account can be used to play different tracks on different speakers.

If one Google Home Max isn’t enough for you, then how about two? I’ve not yet tested this configuration, but the thought of two Home Max’s working together is pretty mind-blowing, not to mention expensive.

Pairing two Home Max speakers also means finding the room to place them, which will be tricky in many homes. Two HomePods not only work out cheaper, but they’re much easier to place. And, the HomePod sounds amazing in a stereo pair.

As a smart speaker that’s capable of high-quality music, there’s nothing out there with the same level of function. The Apple HomePod sounds great, but Siri isn’t as accomplished as the Google Assistant; the Sonos One loses some of the features of Echo devices, and doesn’t sound as good.

But, life isn’t just about the combination of features. If you’re already deep in the Google ecosystem and don’t generally have different people at home listening to different music at the same time, then the Home Max will make a powerful addition to your home, offering genuinely great audio.

If multi-room is more important to you then Sonos is a better option, since it’s designed to work with multiple users in multiple rooms.

The Sonos Play:5 sounds a little better than the Home Max, and integrates with Alexa, letting you add voice control via an Echo Dot, for example – but it’s more expensive. Alternatively, two Sonos Ones could make a decent alternative with Alexa already built-in, although you’d want to buy the Sonos Sub to really hit the bass notes.

Then, there’s the Apple HomePod. Siri might lag behind the Google Assistant, but if your home is full of Apple kit then the poised and balanced sound quality alone may be enough to convince you. And, with Apple Music, you can play different tracks on different players. Plus, the HomePod is that little bit cheaper, and its smaller dimensions make it easier to place around the house.

An amazing voice assistant and great audio, but the Home Max lacks multi-room magic to make it perfect.