Adding a screen to the Echo smart speakers has proved a winner for Amazon, particularly here with the diminutive Echo Spot. With the clear, round display, the Echo Spot becomes the perfect bedside companion, giving you a clock and more information on requests, plus the ability to make video calls. The only potential downside is the upcoming Echo Show 5, which gives you a traditional 5-inch screen in an Echo and is going to be cheaper than the Echo Spot when it's released late in June. If you can hold off, wait until we've had a chance to review this new model; if you want the smallest, screen-enabled Echo then the Echo Spot remains a quality product.

What is the Amazon Echo Spot?

While the Amazon Echo Show arguably provides the best Amazon Alexa experience, it’s a big, bulky device that won’t fit everywhere comfortably. If you’re looking for that screen-enabled experience on a smaller, cheaper, neater device, the circular Echo Spot could be for you. After spending a lot of time with it, I found that the Echo Spot is the king of the bedside table and a neater device that you can tuck out of the way.

Yet, for all of its prowess, there’s a new device that may just make the Echo Spot redundant: the newly-announced, Echo Show 5. Due for release on the 26 June, the Echo Show 5 has a traditional rectangular screen, although this time it’s a smaller, more bedside table friendly, 5-inches. More importantly, the Echo Show 5 will cost £79.99 making it cheaper than the Echo Spot. As such, you might want to hold off buying an Echo Spot until Trusted Reviews gets a chance to put the new speaker through its paces. 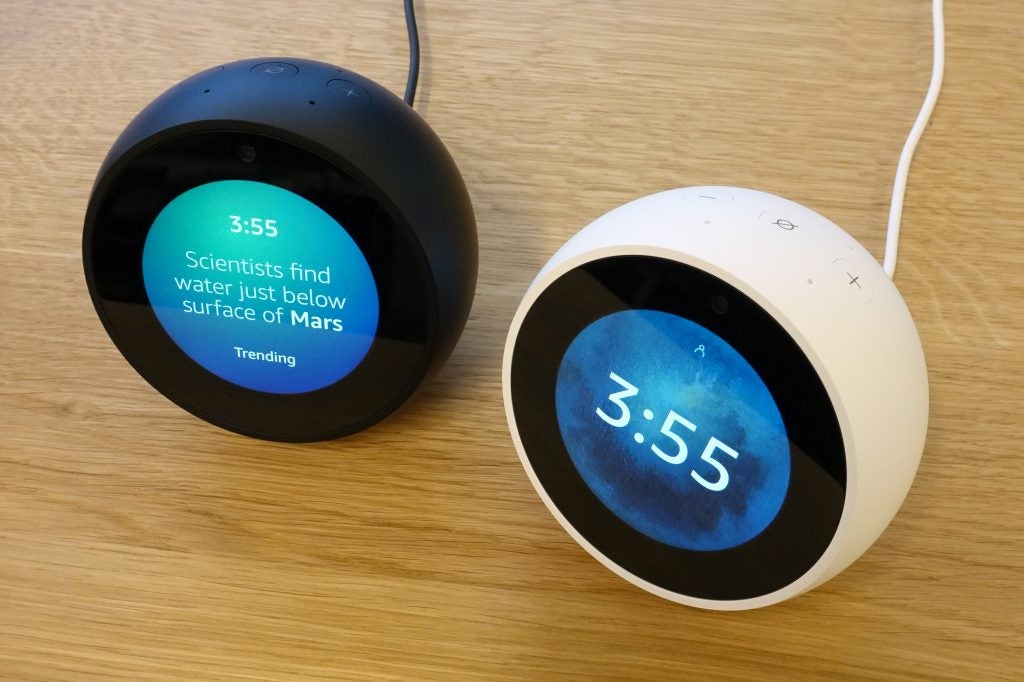 I’ve surveyed plenty of people about the original Echo Show and the consensus has been pretty brutal: most think it’s ugly. It’s also big, easily taking up about a quarter of my bedside tabletop. While I’d happily use one, it isn’t something I’d gift – the overall design is just too much of an imposition to be a hit with everyone. The Amazon Echo Spot addresses both issues.

For starters, it’s much smaller. It takes up no more space than a large mug, comfortably sitting by my bedside lamp or on my desk. It’s round, too, which gives it a more attractive and contemporary look – more HAL 9000, less gonk droid. The shape fits better with the round motif Amazon adopts with the rest of the Echo series.

As always, it’s available in either black or white. The black one is a 21st century Magic 8 Ball, while the white one reminds me of Eve from Wall-E. Either way, this is the least utilitarian design of all the existing Echo devices. I could easily imagine one in my mum’s kitchen. 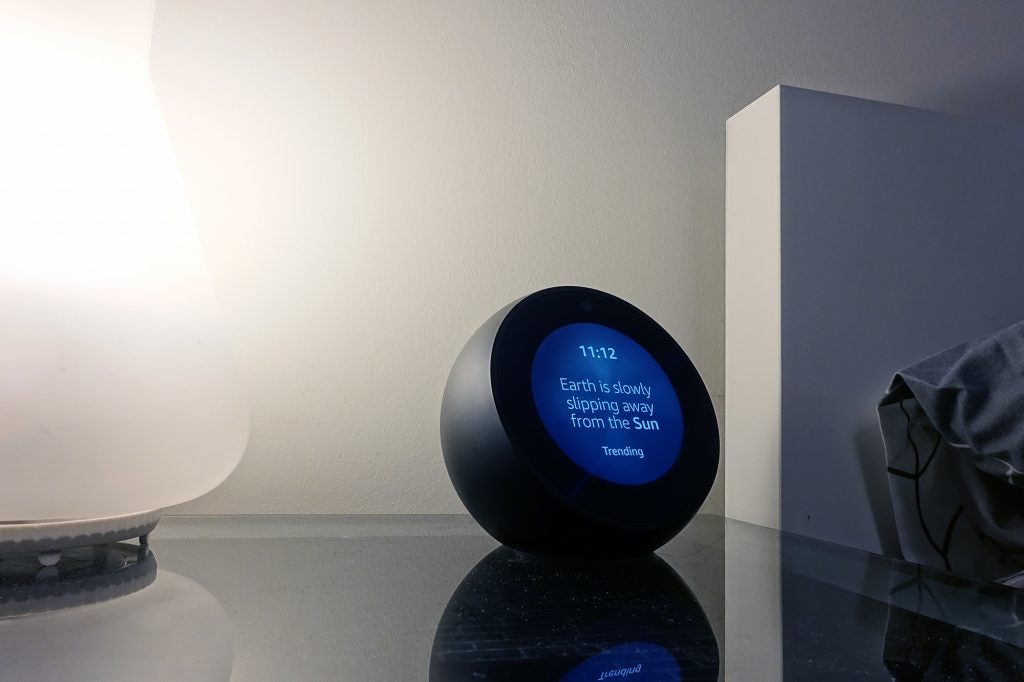 Front and centre (and ergonomically angled upwards) is a 2.5-inch LCD with a resolution of 480×480 pixels. This isn’t massive, but I actually felt the 7-inch display on the Echo Show was overkill. These devices are intended to be glanced at, not actively watched like a TV.

At the top of the device sit four microphones and three buttons – two for volume, one for privacy. There’s Bluetooth output, but you also get a 3.5mm output on the rear for connecting to speakers and hi-fi systems. The only other socket is for the mains adapter. Unlike the Amazon Echo Dot, the Spot can’t be run on USB power.

Amazon really doesn’t want people to think of the Echo Spot as just an alarm clock, but that’s inevitable given the device’s shape, size and selection of round analogue clock faces. You can use digital clock faces, or even upload your own background, if you’re after less of an alarm clock ‘look’ for the kitchen or office. 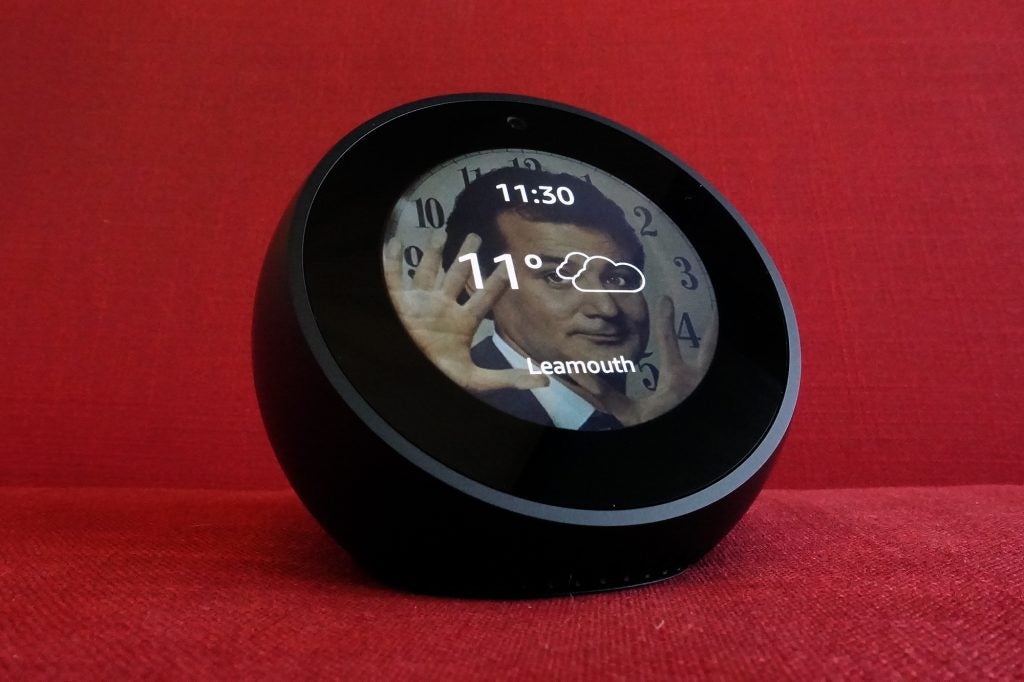 Just like the Echo Show, the Amazon Echo Spot’s homepage can be customised to flick through your appointments and to-do lists, active timers and trending news stories. An ambient light sensor automatically brightens and dims the display, but if you prefer to sleep in total darkness then Alexa can turn off the screen entirely.

The video-call feature makes a return here. Although not at all obvious with the black bezel, there’s a camera at the top of the device that can be used for face-to-face chats with other screen-toting Echo devices, as well as smartphones with Alexa installed. For those concerned about privacy, you might do well to use the Amazon Echo Spot away from the bedroom.

Aside from standard video calls, there’s the Drop In feature. You can connect with another contact without them manually picking up. I find it most useful as an intercom system around the home. 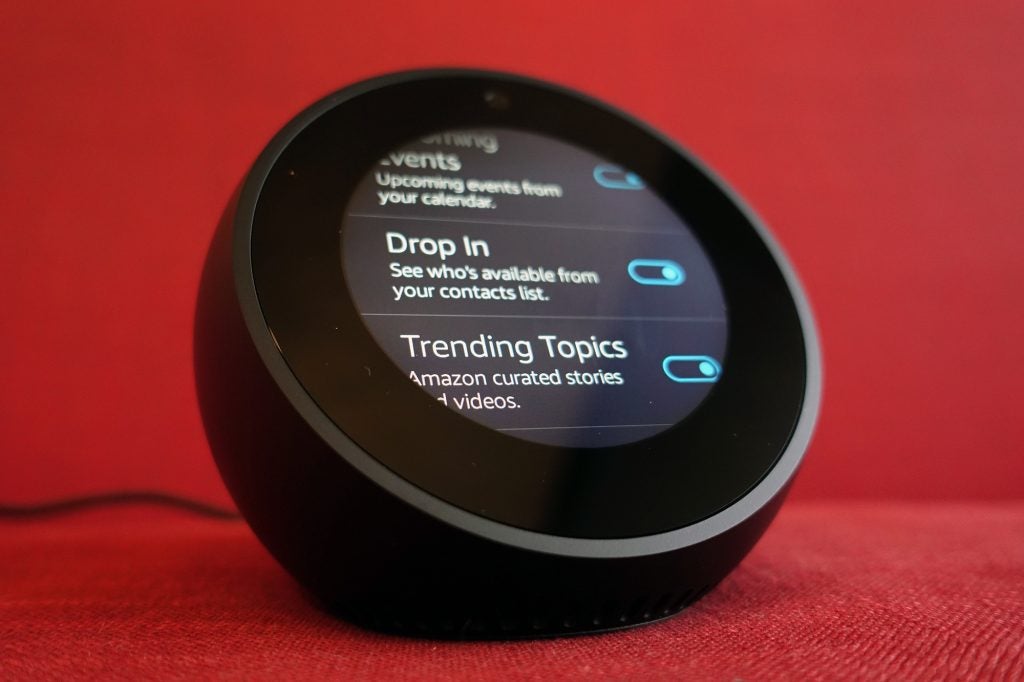 There are safeguards in place to protect privacy, in case you worry about being spied upon. Firstly, Drop Ins only work when both parties have consented to the feature within the settings. Even then, the first 10 seconds of a video Drop In are blurred out – plenty of time to react if somebody tries to Drop In at an inappropriate moment. You can also choose to disable video and opt for audio-only, or disable communication entirely.

Speaking of surveillance, Amazon’s ‘glanceable’ Echo devices can connect to certain security cameras, such as Google’s Nest Cam series and the Netgear Arlo range. My Echo Spot is connected to my Ring Video Doorbell, so I can keep an eye on the front door. It’s great for when I have headphones on and am waiting for a delivery.

That’s it for screen-related features. Elsewhere, the Amazon Echo Spot functions much like other Echo devices in that it runs Alexa. She can do everything from setting timers to fetching music from Spotify and turning your lights green. We’ve written extensively about Alexa’s features – read our original Amazon Echo review or this guide on Google Assistant vs Alexa. 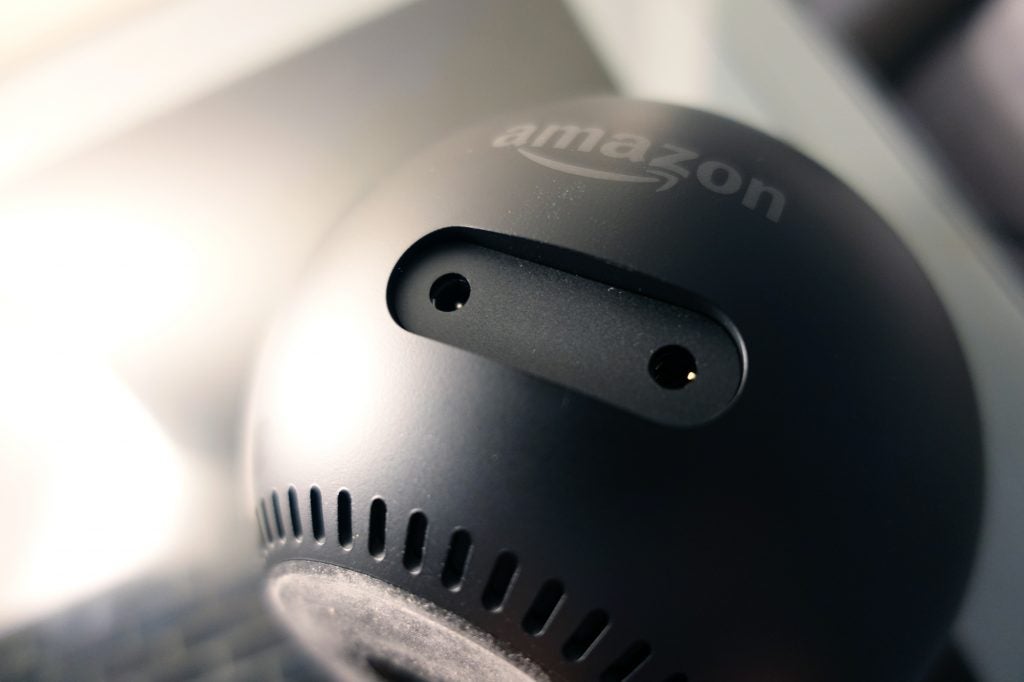 When I first laid eyes on the Amazon Echo Spot, I had concerns. I review a lot of TVs, so a round screen just seemed an odd proposition.

But it’s totally fine, because a 4:3 or 16:9 screen is unnecessary when you’re not watching films and trailers – and you certainly won’t be doing that on a device of this size. It’s actually perfect for framing video chats.

I was also worried the screen would be too small, but not once did I find myself squinting at headlines. The display offers enough clarity, sharpness and contrast that the limited items it displays are easy to read.

The touch element of the screen is helpful, too. It’s sufficiently sensitive to respond to gentle prods and nudges – which is just as well, since big swipes are the last thing you need on a tiny display. 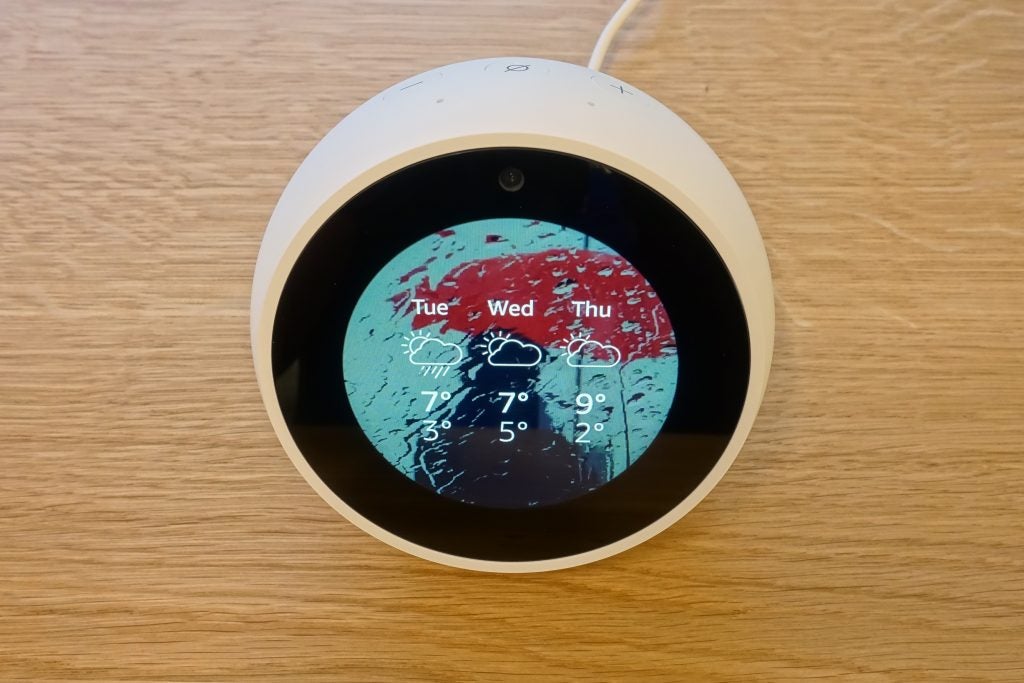 On the audio front, it’s fine. The sound is clean and balanced. There’s enough weight for voices to sound natural, which is good if you’re a fan of radio talk shows. However, there’s a limit to what this little device can pump out – and it’s in this regard that the Spot loses to the Echo Show.

If you want a musical experience with a proper sense of space and dynamism, you’ll want to upgrade. Thankfully, the Bluetooth or 3.5mm output means you can push music duties to bigger speakers.

I have my Echo Spot wired up to my hi-fi system, but the simplest upgrade would be to wirelessly connect to a Bluetooth speaker.

As for the core smart features handled by Alexa, the Echo Spot performs as well as any of the other Echo devices I’ve tested. The far-field voice recognition works – I’m able to get a correct response from across the room or down the corridor. I very rarely have to repeat myself.

That, surely, is the first step towards a properly functioning robot overlord. 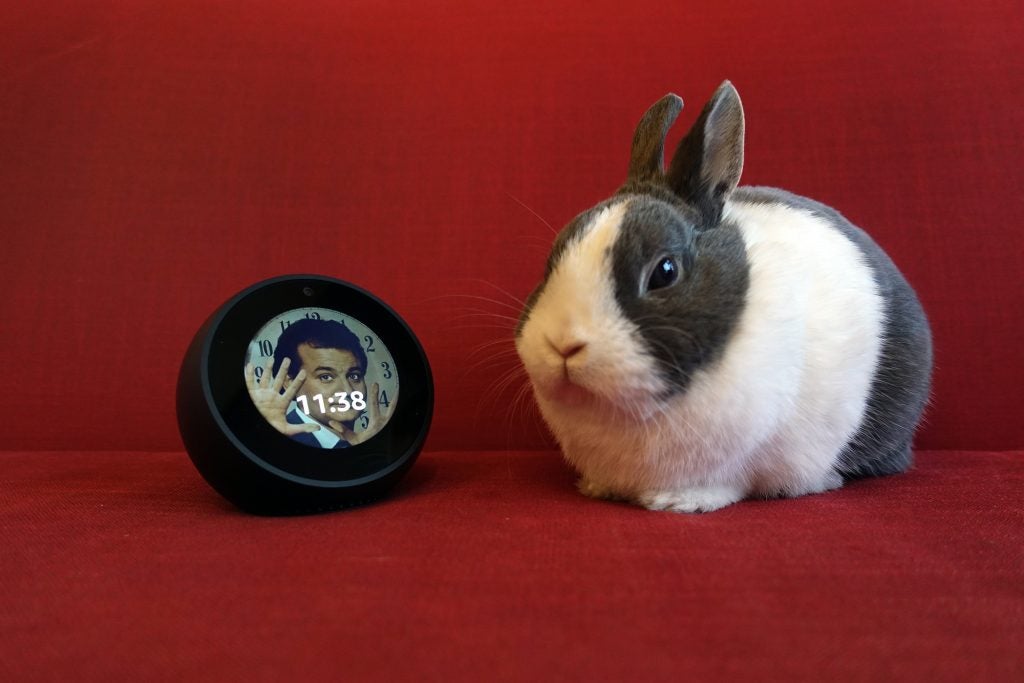 Should I buy the Amazon Echo Spot?

Of those two devices, I’d choose the Spot. It’s smaller, cuter and more affordable. And that 3.5mm audio output is ideal for those wanting to connect to their existing sound systems.

That said, if you want a 10-inch screen on your kitchen counter, or if you want the best-sounding Echo device available, then the Echo Show is for you. And, it’s worth waiting for the cheaper Echo Show 5 to see if it can do the same job.

Not fussed about the screen? Then your cash is better spent on the audio-only options. The full-sized Amazon Echo speaker has recently been refreshed to offer more colours, while the diminutive Amazon Echo Dot remains the most affordable way to bring Alexa into your home.

If music is important to you, check out the Alexa-toting Sonos One, or wait for the Apple Homepod.