Do you go for the Note 5 or S6 Edge+? We take a look at the specs to see how Samsung’s two new phablets compare

We have to admit to being slightly confused by the latest launch event from Samsung. The Galaxy Note 5 and Galaxy S6 Edge+ represent two super-sized bundles of contradictions.

There’s also a very real chance we won’t even be seeing the Samsung Galaxy Note 5 released in this country.

Out of this curious mix, however, we have two highly capable smartphones that will undoubtedly take their place near the top of the table. So which is better?

Let’s begin with what is the biggest difference between the two phones by some stretch. It’s the design of the Galaxy Note 5 and the S6 Edge+ that truly sets them apart.

The Galaxy Note 5 is the direct follow-on from last year’s Galaxy Note 4, but from a design standpoint it borrows heavily from the Samsung Galaxy S6.

Its aluminium frame is far softer and rounder than that of the Note 4, and generally more premium-feeling. It also now has a fixed glass back, rather than a flimsy removable plastic cover. Of course, that results in its own issues, which we’ll discuss later, but it’s undoubtedly better in the hand than last year’s model.

The biggest design difference with the Note 5 when compared to the S6 Edge+, however, is the presence of an S Pen stylus. With a newly enhanced housing system, you can remove the stylus from the bottom edge of the phone by pushing it like a button. The way it pops out is a delightful design touch.

Its presence makes the Note 5 far more of a productivity device than the S6 Edge+, which is more like a super-sized Galaxy S6 Edge.

In fact, that’s precisely what the Galaxy S6 Edge+ is, even down to its lookey-likey design. It has the same dual-curved display, the same sweeping metal rim, and the same fixed-glass back.

If anything, the S6 Edge+ is even better built than its little brother. There’s less of a gap where the screen meets the metal, and you now find a finely machined line on the top edge.

In terms of dimensions, the S6 Edge+ is a millimetre taller than the Note 5, but it’s pretty much the same width and is a little over half a millimetre thinner.

Driving home the sense that these are two variations on the same theme, there’s no distinction that we can draw between the display of the Galaxy Note 5 and that of the Galaxy S6 Edge+.

Both are large 5.7in screens with a 2,560 x 1,440 resolution, much like the Galaxy Note 4. However, the quality of Samsung’s Super AMOLED display technology has improved markedly, leading to beautifully vibrant yet accurate colours, deep blacks, and exemplary brightness levels.

Related: Note 5 vs iPhone 6 Plus: Which should you pick 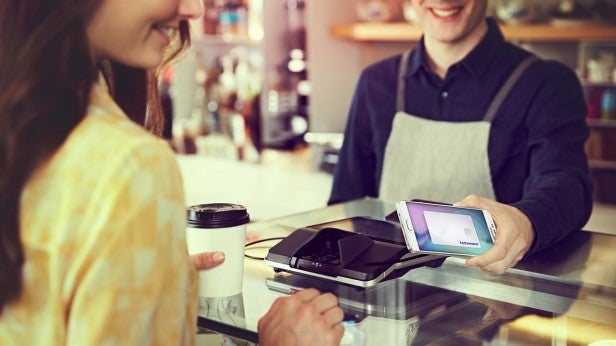 Despite the superficial similarities to previous Samsung devices, these are arguably the two best smartphone displays around. They’re that good.

Of course, the one difference between the two is the Galaxy S6 Edge+’s dual-curved display, which we’ve already touched upon (no pun intended). This lends a more pleasant feel when dragging to the edge of the screen, but the main differences relate to software, which we’ll discuss below.

Once again, it’s all square between Samsung’s two new phablets. Both the Galaxy Note 5 and the Galaxy S6 Edge+ share the same Exynos 7420 CPU.

In fact, they also share this chip with the Galaxy S6 and Galaxy S6 Edge. Some may be disappointed that Samsung didn’t opt to fit a faster, more advanced CPU, but the truth is that the 7420 remains the most impressive smartphone chip on the market, and we haven’t encountered any common tasks that can faze it. 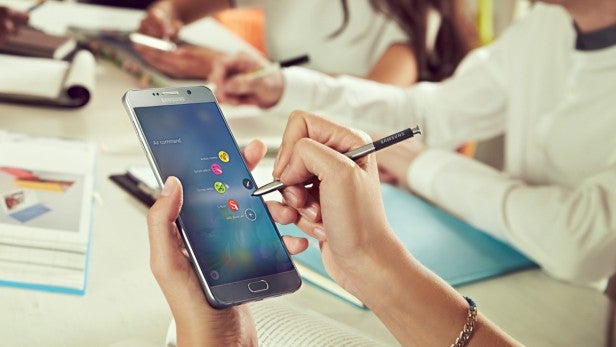 One notable improvement here relates to the amount of RAM provided. Both the Galaxy Note 5 and the Galaxy S6 Edge+ receive an extra gigabyte of super-fast LPDDR4 RAM, bringing the total up to 4GB.

This promises to make multi-tasking even faster – although we suspect this will have more of a practical application with the Note 5. Those split-screen functions just make more sense with the precision that an S Pen stylus can bring.

The Note 5 uses the exact same camera sensor and lens as the Galaxy S6. That’s great, right? Well, for pure image quality, yes it is. The Samsung Galaxy S6 remains one of the best cameraphones on the market, after all.

But this is supposed to be a half-step on from the last Galaxy S model. It’s why the Galaxy Note 4’s camera was notably better than the Galaxy S5’s. More of the same here almost feels like a backwards step.

Having said that, there have been some improvements on the software front. Samsung has improved its VDIs for more stable videos, and it’s also added a bunch of movie-editing and real-time video-sharing options.

Those new features are shared across both phones, so there appears to be absolutely nothing between the two cameras.

It’s funny – both of these new phones come with identical 3,000mAh batteries, but while this is a slight disappointment with the Note 5, our first reaction was a little more positive with the Galaxy S6 Edge+.

We think it’s all to do with the nomenclature and the lineage of both phones. The Samsung Galaxy Note 5 is very explicitly the direct follow-up to the Galaxy Note 4, and that phone’s awesome battery was 220mAh bigger than the Note 5’s. What’s more, that battery isn’t removable (and thus replaceable), which is far more of an issue in this productivity focused range. 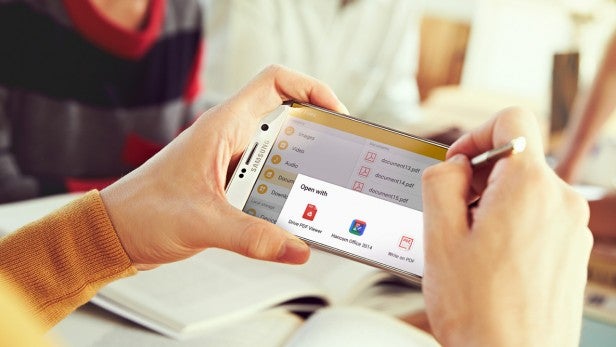 Meanwhile, the Samsung Galaxy S6 Edge+ is named and styled after the Galaxy S6 Edge, whose disappointing battery was 400mAh smaller. The S6 Edge+ battery is a considerable improvement, in other words, even if it too lacks the ability to be removed and replaced.

Of course, both phones will likely attain the same or similar levels of battery life. What’s more, Samsung’s Exynos processor should prove more efficient than the Note 4’s Snapdragon. We’re expecting both will last a day of pretty intensive usage.

Interestingly, Samsung has also improved wireless charging to the point that both phones charge 27 per cent faster than the S6. The presence of wireless charging in both, meanwhile, is a plus point – albeit an expected one.

Again, there’s nothing to distinguish these two new phablets on the storage front. They come with options of 32GB and 64GB – but no 128GB, which is disappointing.

What’s considerably less peachy – indeed, nigh-on unforgivable in some circles – is the total lack of expandable storage in both phones.

Once again, this omission is more keenly felt with the Note 5, which bears the productivity focused Note name. This is a line of phones that helps power users get things done, and the lack of flexibility that comes with no microSD slot slightly beggars belief.

Both of these phones come with Android 5.1.1, which is the latest version of Google’s Android Lollipop OS. Of course, Android M is just around the corner, but you can bet that these two phones will be among the first that Samsung updates.

You also get the same custom TouchWiz UI for both, which will continue to irritate to varying degrees. Our view is that it’s a much-improved experience over previous versions, that it’s perfectly usable, but that we’d still much rather have an unadorned version of Android with a couple of minor tweaks to properly utilise each phone’s unique feature. 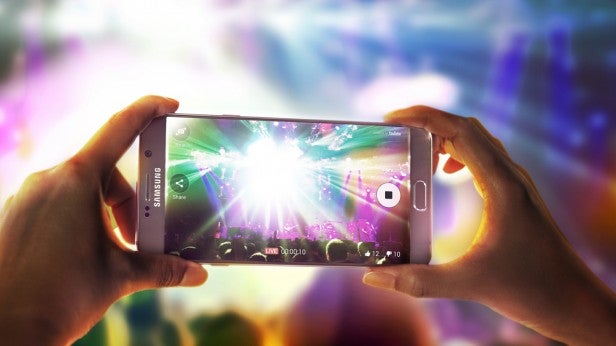 As it stands, those unique features bring about the only software differences between the Note 5 and the Galaxy S6 Edge+.

The Note 5 gets the usual S Pen modifications – a light menu overlay that appears wherever you are on the phone when using the stylus, and which allows you to take quick notes, screenshots, memos, and more.

It’s also possible to send messages and emoticons from this edge-based interface to your favourite contacts – but only if they too have a Galaxy S6 Edge+.

The two phones share the exact same camera, and both run on the same Android 5.1.1-derived software.

In fact, the only differences relate to the design and purpose of each phone. The Note 5 is intended as a productivity device, and as such comes with a trademark S Pen stylus. The S6 Edge+, meanwhile, is a flashy high-end lifestyle phone, and has the ostentatious dual-curved display to prove it.

The Note 5 is the more practically useful phone, then, but we can’t help but be more enthused by the Galaxy S6 Edge+. It follows through on the idea of a super-sized Galaxy S6 Edge – perhaps a little too literally, but faithfully all the same.

But the Note 5 simply doesn’t represent the same step forward that previous Note devices have always brought about. In fact, in some ways (namely the lack of a microSD card and a smaller, fixed battery) it’ll be a step back for productivity hounds.

Ultimately, both of these phones are likely to impress when they hit shops around the world – but we’re not quite as disappointed that it’s the Galaxy S6 Edge+ that’s making its way to the UK rather than the Note 5 as we should have been.