The Note 5 has arrived, and while Samsung seems to want to push the Galaxy S6 Edge+ instead as its killer Android king, the new Note is still a corker.

But how much better is it than the classic Samsung Galaxy Note 4?

We’ve been using the two phones side by side to see what progress Samsung has made in a year and whether it’s really worth the upgrade.

As well as observations from just using these phones, we’ll be looking a bit deeper with specific camera and battery tests too.

A lot has changed in a year. The Galaxy Note 4 arrived at an awkward time, as Samsung was transitioning from its nasty plastic-fantastic design to the glass and metal seen in the Note 5.

The Note 4 has a leathery textured plastic back and real metal sides, where the Note 5 is made of Gorilla Glass 4 and aluminium alloy. The dodgy look and slightly cheap feel of the Note 4’s textured plastic is gone.

A more expensive feel is the result. 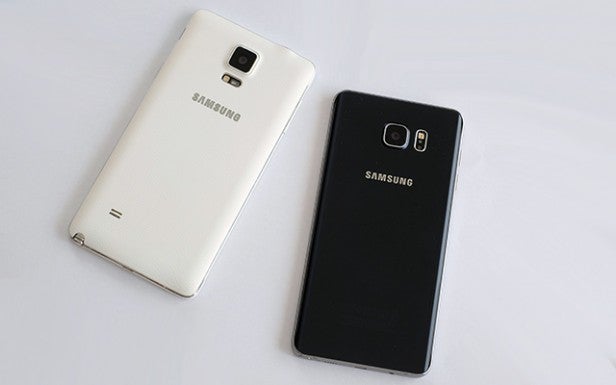 That’s not the most important change, though. You get used to either after a few days. What matters more is that the Note 5 is also significantly narrower and a bit thinner, making it a good deal easier to handle. It much less of a stretch for your hand.

Rather than having a flat back, the Note 5’s rear curves around at the sides, much like the S6 Edge+ does on its front. This softens out the feel of the phone, making the difference in thickness seem even greater than it actually is. 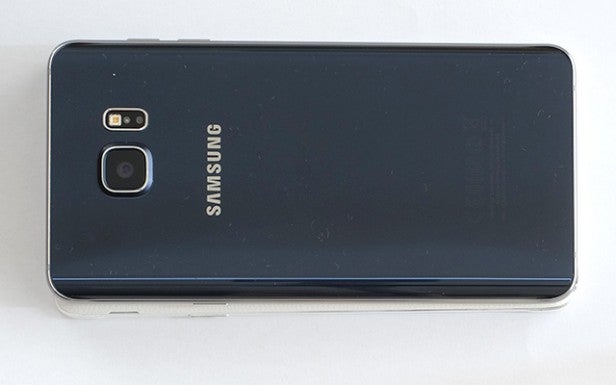 Both phone have fingerprint scanners, which sit under the central home button. However, the Note 5’s is significantly better. Where the old Note 4 has a scanner that needs to be swiped, the newer version reacts to a finger just resting on it. It’s much better in general use, feeling much more reliable.

As the king of screens, you might expect Samsung to have made loads of progress since the Note 4. However the quality of these screens is roughly similar in most areas: both are awesome.

They’re both 5.7 inches across, have a QHD resolution and use Super AMOLED panels. With the right display setting you get great colour accuracy, and terrific contrast.

Colour performance is a bit better in the new phone, but what’s most obvious is that the Note 5 offers much greater peak brightness. You won’t need to get close to top brightness in most situations, but in very tricky bright outdoors situations the newer phone is stronger.

Related: iPhone 6S Plus vs Note 5 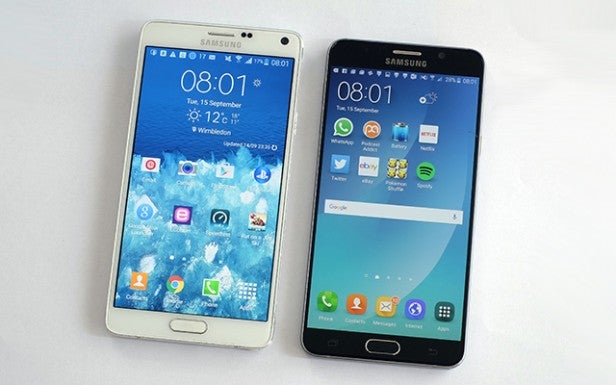 DisplayMate’s tests back-up our findings too.

“The Galaxy Note 5 is the Best performing Smartphone display that we have ever tested. It takes over from the Galaxy Note 4, which was the previous record holder for mobile display performance,” it says. That sums it up nicely.

The S Pen is one of the most important features of the Note series, but the tech behind the stylus hasn’t changed too much this year. That’s no huge surprise, when the Note 4 already offers the pressure sense fidelity of a dedicated Wacom graphics tablet.

Wacom makes the digitiser tech for the Note series, and both phones have 2048 levels of pressure sensitivity and neither stylus needs its own power source.

What’s different? The Note 5 stylus has a clicker on the end. It doesn’t do anything, but does give you a nice click as you take the pen in and out of the phone. 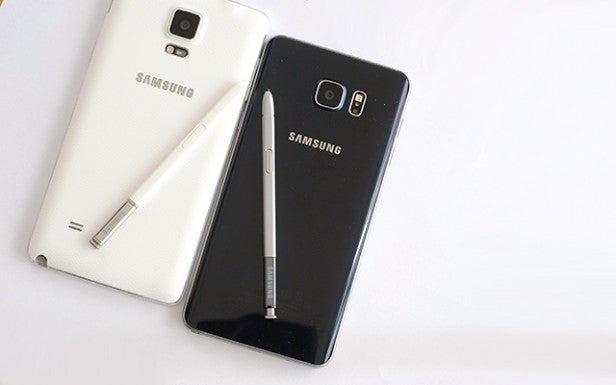 The software looks a little different too, but the functions are roughly the same. You use Air Command to access pen-led features, and they include S Note and Action Memo. These let you scribble away on the screen, and convert your scribbles to characters, or email them to yourself as an image. 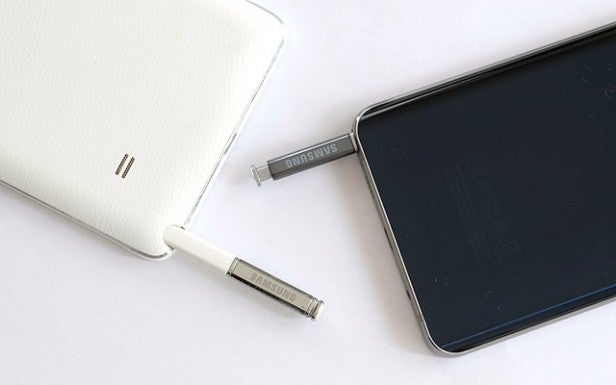 Not every part of the Note 5 is an upgrade over the Note 4. The older phone has an IR transmitter, the new one does not.

Few people seem to have noticed, but an IR blaster is a neat extra. It lets a phone act like a universal remote. Your Note 4 can control your TV, and so on. The Note 5 can’t.

Most of the other connections are the same, though. It’s a high-end buffet. You get Wi-Fi up to the ac standard, Bluetooth (4.2 in the Note 5), Wi-Fi Direct, microUSB 2.0 and NFC. 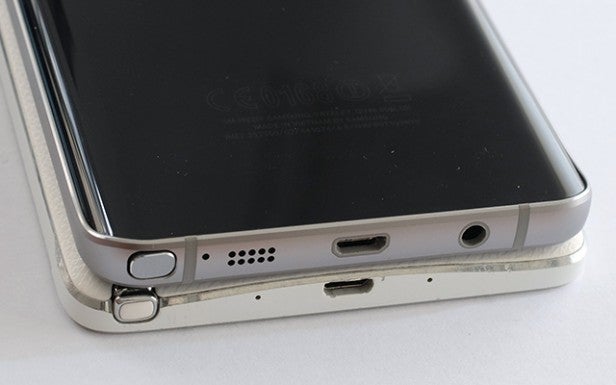 Just as the Note 4 has the IR blaster missing from the Note 5, it has a microSD memory card slot, which the Note 5 lacks. This is down to a change in Samsung’s tactics. By making memory non-expandable, it makes the high-storage versions of its phones more attractive.

Like all Samsung Android phones, the Note 5 and Note 4 use the TouchWiz custom UI. And these days, both phones run Android Lollipop. The Note 4 launched with Android KitKat, but has since been given the upgrade.

There are some significant-isn differences between the versions of TouchWiz, but ultimately these phones look and feel somewhat similar. They have separate apps menu and home screen areas, and the apps menu borrows its background from the homescreen, making everything appear quite simple.

Both also have Briefing, the Flipboard-powered home screen news feed that lives just to the left of your left-most home screen. You can turn it off if you don’t like it. 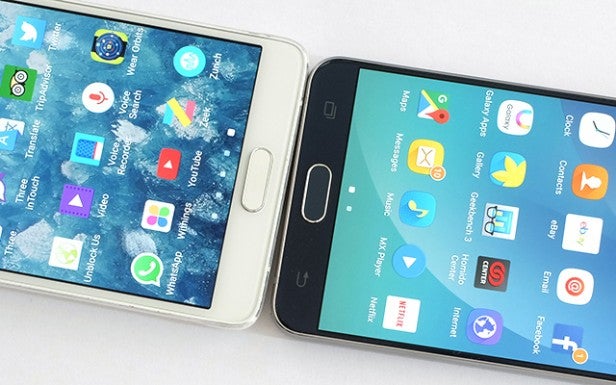 The differences? The app menu customisation is different in the Note 4, using an top-level Edit button rather than a more involved menu. The Air Command stylus menu also looks different, taking up the whole screen in the Note 4 where it appears like a small overlay in the Note 4.

Note 5 vs Note 4: CPU and Performance

Some elements of the Note 5 haven’t been radically altered. However, the CPU has.

The Note 4 has a Snapdragon 805 processor, while the Note 5 has left the Qualcomm bandwagon to start up with Samsung’s own Exynos CPUs.

The Snapdragon 805 is a quad-core processor where the Exynos 7420 has eight cores, but more cores doesn’t necessarily make for better performance. While the clock speed of the Note 4 is a lot higher at 2.7GHz to the Note 5’s 2.1GHz, the cores of the Note 5 are newer. Its performance cores are Cortex-A57 units, where the 805 uses older Krait 450 ones.

The architecture in general is newer too. The Exynos 7420 is a super-efficient 14nm chipset, where the Snapdragon 805 is a 20n chipset. This tells you the size of the chipset’s transistors, and it’s a case of ‘the smaller, the better’.

The GPU is newer in the Note 5 too.

Geekbench tells us roughly the performance difference. All guns blazing the Note 5 scores around 5200 points in Geekbench 3, dropping down to 4100-ish when you enable power saving. The Note 4 scores in the 3835 area, a significant drop from the quite amazing (for mid-late-2015) performance of the Note 5. 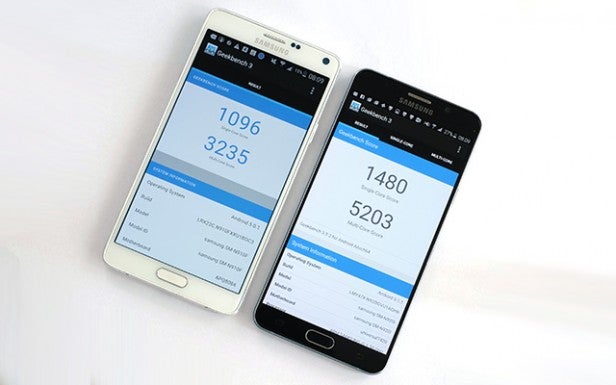 For the most part, though, both phones are very fast. And the Note 4 isn’t all that much slower than the Snapdragon 810 CPU competition (like the HTC One M9).

The Note series often has more RAM than almost any phone out there. The Note 5 has 4GB of the stuff, and it’s snappy DDR4 too. Being that bit older, it’s no surprise the Note 4 has 3GB RAM, but it is still a lot for phone even today.

We had believed the Note 4 uses DDR3 RAM, but its performance is very similar to that of the Note 5. According to the A1 SD RAM benchmark, both RAM sets are able to juggle data at up to around 7000MB/s. Judging by our recent comparative tests, this seems very high for phone DDR3.


Related: How much RAM does your phone really need? 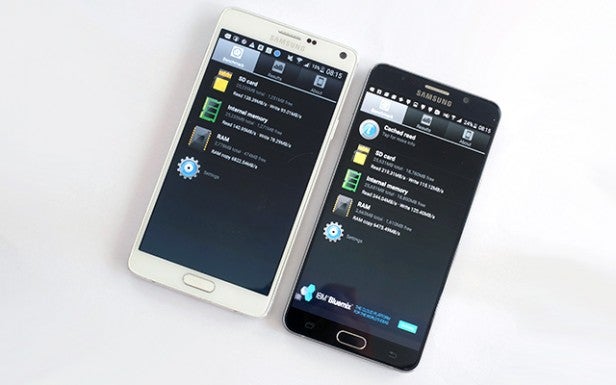 At a glance, the Note 5 and Note 4 cameras seem quite similar. Both have 16-megapixel sensors, both have optical image stabilisation. However, there are some very important differences. 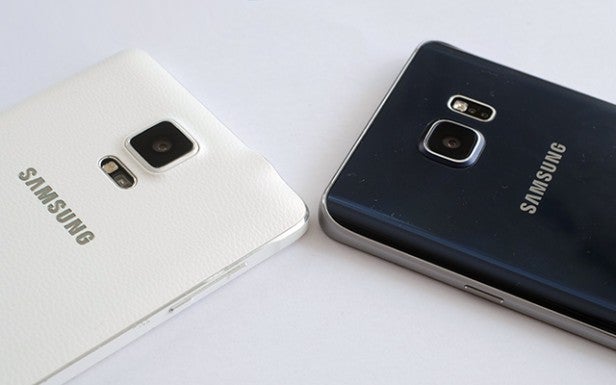 The newer phone is also much faster to shoot, with quicker shot-to-shot speeds and more reliable focusing. Samsung appears to have really levelled-up its processing too.

Where the Note 4 can often smear out fine texture detail, mistaking it for noise, the Note 5 tends to retain it. Low-light noise handling is also much better in the newer phone.

While they seem similar in specs, there are some worthwhile improvements that make the Note 5 a significantly better camera. 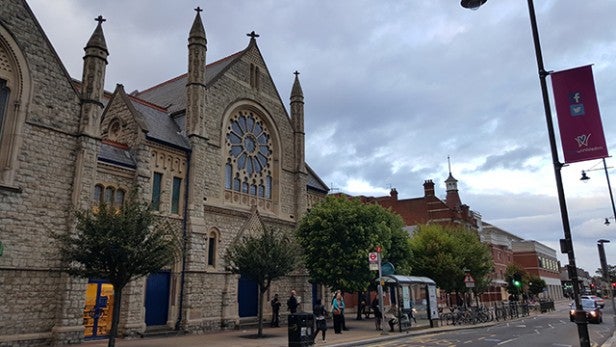 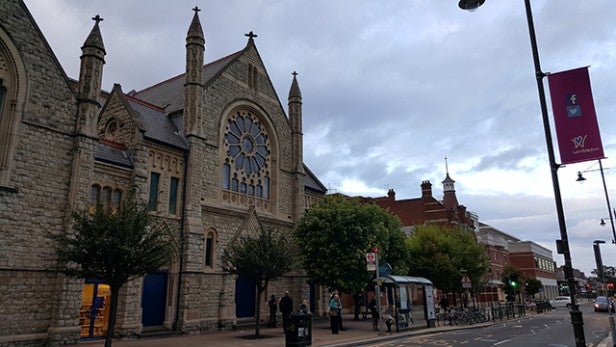 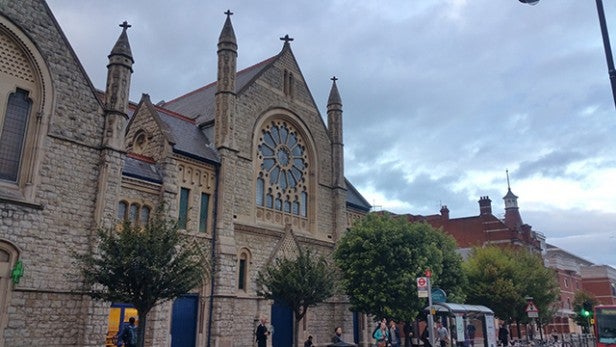 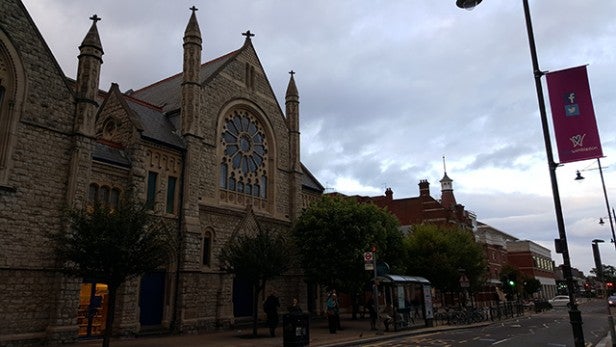 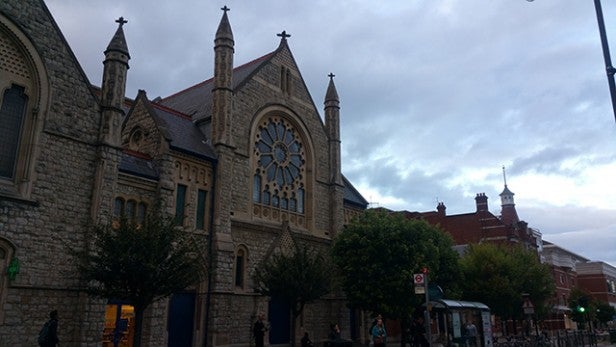 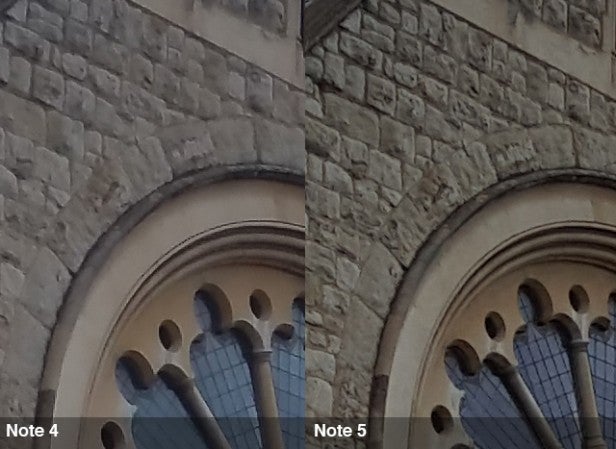 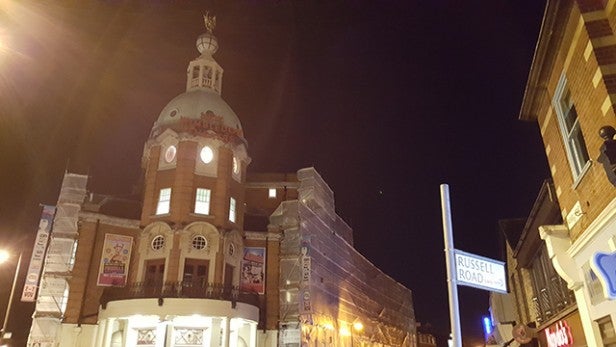 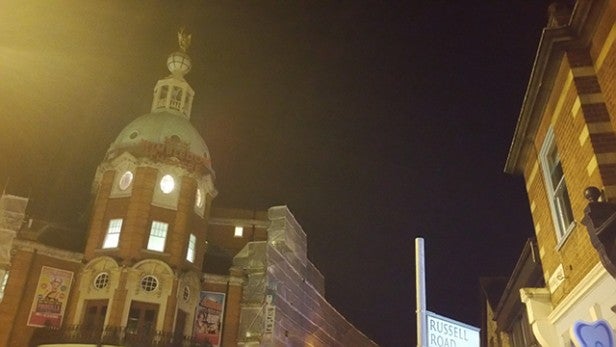 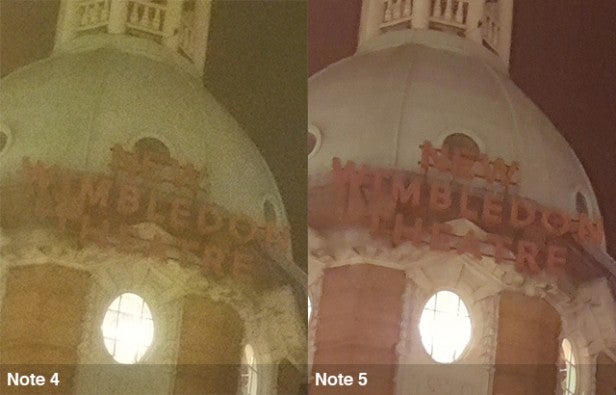 One worry of the Note 5 when it arrived was that it has a 3000mAh battery where the Note 4 has a 3300mAh one. However, efficiency savings across the board mean the Note 5 lasts just as long, and even longer in some situations.

One of these is video playback. Where the Note 4 lasts for 13 hours playing a 720p MP4 video, the Note 5 hangs on for more than 15 hours. It’s a very impressive performance.

In general use you’ll get around a day and a half’s use out of a charge with either, making these phones good for power users. The benefit of the Note 4 is that you get access to the battery, and can carry around a spare. The Note 5’s battery is locked in.

So why is the Note 5 more efficient? The 14nm CPU is significantly more capable and the screen is less of a drain. 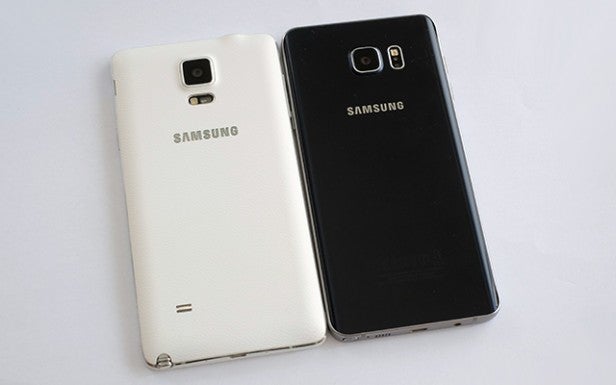 These phones haven’t gone in for the front-loaded speaker hijinx of phones like the HTC One M9. The Note 4 has one on its back, the Note 5 one on its bottom edge, in iPhone-like fashion.

While not class-leading, the Note 5’s speaker is a bit better than the Note 4’s. It has a bit more mid-range oomph, getting rid of some of the residual thin-ness of the older model.

Is the Note 5 a better phone than the Note 4? Yes it is. Screen and camera tech have both been tweaked, the build quality is a league above and the CPU is both more powerful and more efficient.


It’s a next-gen phone and no mistake.

However, if you find a red-hot deal for the Note 4, it’s by no means a bad buy. By including microSD support and an IR transmitter, you could easily argue the older phone is a more versatile media device, and one that’s a bit more nerd-friendly.

The problem with Note phones, though, is that they never seem to become all that cheap. The combo of being genuinely great and genuinely different from most other phones means they don’t depreciate in quite the same way. Have money to burn? We’d still opt for the Note 5, mostly for the accessibility of its shaved-down frame and the bonus speed of its camera shooting.

After a good while’s use, those are the parts we appreciate the most.