Galaxy Note 5 vs iPhone 6 Plus: Which phablet should you go for?

There wouldn’t be the big-screened phones we have today without the original Samsung Galaxy Note. The once extremely large 5.3-inch, stylus-packing phone was the blueprint for future ‘phablets’ and the line is still the best example of how to make a big phone easy to manage.

We’ve been hearing rumours about the latest iteration of the series, the Galaxy Note 5, for a while now and Samsung has finally taken the wraps off its latest flagship. However, those of you in the UK might be in for a wait until you get your hands on it as Samsung says it isn’t going to release it in the UK yet.

That’s because the Korean company is putting all its weight behind the curvy S6 Edge+ hoping it can outmuscle the iPhone 6 Plus.

But, we still have a look to say about the mysterious Galaxy Note 5 so lets see how it shapes up against Apple’s iPhone 6 Plus.

These larger devices are great for many things, though most of it revolves around the bigger display. Browsing the web, playing games, shooting off emails, watching YouTube clips and so on are all so much better with all that extra screen real-estate.

Watch our Apple iPhone 6 Plus video

Samsung’s Galaxy Note 5 has a slightly larger panel that the iPhone 6 Plus – 5.7 compared to 5.5 inches – but where the competition really separates is resolution. Just like last year’s model, and this year’s Galaxy S6, the Note 5 is equipped with a pixel-packing quad-HD display with a resolution of 2560 x 1440 and 518ppi pixel density. We’ve only had a short time, so far, to use the Super AMOLED display but all signs so far point to it being just as stunning as its brothers.

The iPhone 6 Plus can’t match the Note 5 for pixels, it’s a 1080p panel with a 401ppi, but the IPS display is far from a disappointment. Yes, we love the idea of more pixels, but the accurate, bright and sharp screen on Apple’s device is still amongst the best in the game.

We’re going to take a shot and say the Note 5 will have the better all-round display, your move iPhone 6S Plus.

Design – Samsung’s design revitalisation continues, but we have concerns

Samsung’s switch in design philosophy over the past twelve months has seen the Korean company almost entirely ditch its once infamous plastic and faux-leather combination, with metal and glass now being the order of the day.

Last year’s Note 4 was one of the first devices to employ this change in direction and it was a real looker. The metal banding added a sturdy feel, while a grippy rear panel ensured the big phone wouldn’t slip out of your hands. 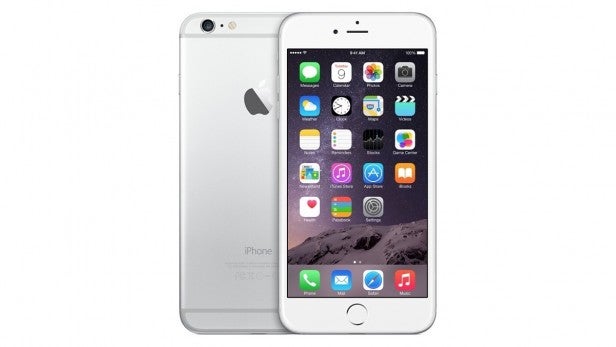 In some ways, we’re a little bit disappointed about the design of the Galaxy Note 5, even though it takes most of its inspiration from the S6 that we loved so much. Our main point of concern is the glass back; will it be prone to cracking? Will it slip out of our clammy palms? We’ll have to spend more time with it to know for sure.

Another change this time around seems to be directly in response to the ‘Bendgate’ ‘scandal’ that broke just as the iPhone 6 Plus was hitting shelves last year. The Note 5 is constructed from 7000 series aluminium, a material many have speculated will be used in the next iPhone 6 Plus, and it will apparently make the phone 1.7x stronger and 1.3x more scratch resistant than its predecessor.

Both the iPhone 6 Plus and Note 5 have a curvy look, with rounded corners and a flat back. Even though the latter possesses a larger display, it’s actually the more compact device, measuring in at 153.2 x 76.1 x 7.6mm compared to 158.1 x 77.8 x 7.1mm. This is mostly down to the larger bezels on the iPhone. They’re more comparable in terms of weight though, with the Note 5 tipping the scales at 171g and the 6 Plus marginally heavier at 172g.

The killer feature on the Note series has always been the S-Pen, a handy stylus that pops out of the phone and lets you doodle to your hearts content. Its abilities have expanded with each new release and we’re happy to say it’s still here with the Note 5. However, most of the changes are physical, with new software quirks M.I.A. The stylus now pops out when you press it down – there isn’t the auto-eject tech that was heavily rumoured – plus it’s a little slimmer and lighter than before.

Samsung also trumps Apple on the software features made especially for the larger phones. On the Note 5 you can open two apps and have them sit on each other, while they can also be made into floating windows, perfect for keeping a video playing while you’re typing out an email. Apple has added some similar multitasking features to the iPad, so hopefully they’ll filter down to the iPhone line eventually. 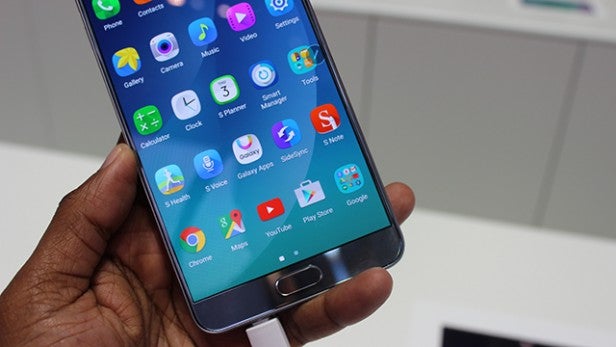 Both phones have fingerprint scanners encased in the home button. Aside from unlocking the device without a pin, these sensors are utilised, in conjunction with the NFC chip, for mobile payments. Apple Pay, which is already available in the UK, and Samsung Pay, coming later this year, hope to help you ditch your bulky wallet.

One of major disappointments with the Note 5 is the lack of microSD expansion and a removable battery. These features suited the power-user type who the would pick up the Note 5 and we’d happily lose the glass back if it gave us more customisability. Obviously, the iPhone line has never, and probably never will, let users expand storage and switch out the battery. The Note 5 will come in 32GB and 64GB versions, with the iPhone 6 Plus adding in a completely useless 16GB and a bigger 128GB model to the party.

Another nifty, albeit minor, feature that is making its way to the Note 5 is some software that’ll upscale your lowly MP3 files up to 24-bit files that should sound better. We’ll have to wait and see just how much better. While it doesn’t offer high-res tracks, all iOS devices now come with Apple Music (free for three months) and the rather fantastic Beats 1 radio station.

Power – Plenty of oomph on both sides, RAM though…

The insides of the Samsung Galaxy Note 5 are almost exactly the same as those present in the Galaxy S6. That means an Exynos 7420 chipset made up of a 2.1GHz quad-core and a 1.5GHz CPU, a Mali -T760MP8 GPU and the big difference, 4GB RAM. That’s four times the amount of RAM that sits inside the A8 chip powered iPhone 6 Plus. While iOS is great at getting the most from limited amounts of RAM, we’d thoroughly expect, and hope, the next iteration comes with at least 2GB. 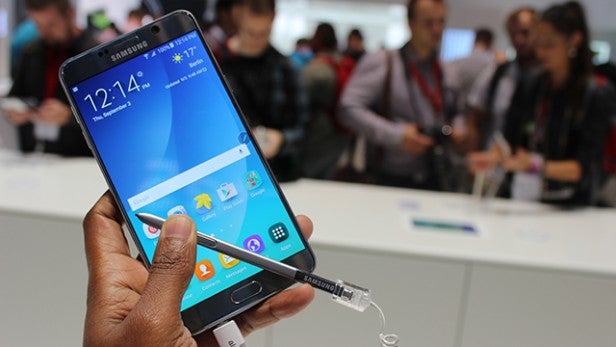 Both of these devices are silky smooth, fantastic performers that have enough power to easily handle all the most graphically intense games and apps out there. They’re both future protected too, with them being 64-bit.

Battery – Phones of this size should last two days

Galaxy Note series loyalists who have been disappointed by the lack of microSD expansion might want to look away now. We’ve already mentioned that the removable battery has also been ditched, but the size of the cell itself has also been reduced. The new 3,000 mAh battery is only marginally bigger than the 2,915 mAh version on the iPhone 6 Plus and that doesn’t need to power a quad-HD display.

Previous Note devices would go two days without needing a full charge, and the iPhone 6 Plus can manage the same, so it’ll be interesting to see whether the latest edition will match. We hope it does, but after the disappointing battery life on the Galaxy S6, we’re certainly apprehensive.

Thankfully, the Note 5 does have a few tricks to make up for other battery shortfalls. There’s wireless charging, which is now faster and should juice up your device sans wires 27% faster than the S6. QuickCharging is included too, one of our favourite current features. The iPhone 6 Plus lack both of these.

Samsung plucked the internals directly from the Galaxy S6, and it’s done the same thing with the camera. It aims to battle the fantastic 8MP sensor from the iPhone 6 Plus with a 16MP shooter complete with UHD video recording.

Both these cameras feature optical image stabilisation for ensuring your low-light shots and videos are blur-free, a vital addition to any flagship smartphone. 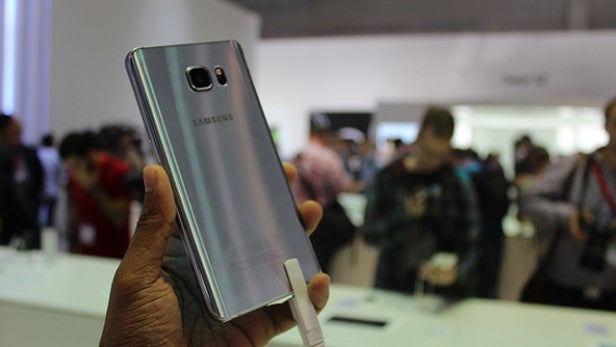 Pictures from the iPhone 6 Plus are some of the finest to come from a smartphone and even though it’s approaching its first birthday, its results haven’t aged. There’s plenty of detail, saturation is good and there isn’t too much post-processing adding any unnatural touches. It’s also blisteringly fast, both to open and focus. No one wants a camera app that takes so long to open you miss that awesome shot.

The Note 5 again packs more megapixels into the front-facing selfie camera, 5MP vs a measly 1.2MP, and the secondary camera on the S6 blew its iPhone counterpart out of the water so we’d expect the same here.

Even though it has seen a spec boost in a number of areas, we can’t help but feel like the Note 5 isn’t as much of a leap forward as it should have been. We loved the Galaxy S6, but we’d hoped Samsung would keep the Note 5 around as the more power-user device, keeping features hardcore fans love like a more durable design, microSD expansion along with a huge, user removable battery.

That being said, Samsung still knows how to make the best use of the larger screen and the nifty S-Pen may not be something we reach for everyday, but it’s a useful trick. Multi-window smarts too really add something to the phone. Add to that a gorgeous Quad-HD display, a whopping 4GB RAM, the chipset that added such a speed boost to the S6 and you’ve got yourself a pretty enticing device. Shame it looks like a UK release won’t be happening, then.

Apple can learn a lot from Samsung when it comes to crafting larger devices and while the iPhone 6 Plus is great, it doesn’t use its big screen to full effect. It does however have all the benefits of iOS; Apple Music, FaceTime, iMessage, fantastic apps and tight integration to name but a few.