One M9 or One M9+? Should you hold out for the bigger HTC phone?

The good news is that after weeks of rumour-mongering, HTC has launched the One M9+. The bad news is that the One M9’s big brother is only going to be available in China, at least for now.

So what are you going to be miss out on? We’ve picked out the key features that might persuade you to hold off parting with your money for a One M9 or leave you wondering why HTC didn’t make the One M9+ its flagship to take on the Galaxy S6 and iPhone 6 in the first place.

HTC has found a design formula and is unsurprisingly sticking to it with the One M9+. There’s the same curved aluminium back and two-toned finish trim as seen on the One M9. The M9’s silver, gold and gunmetal grey colour schemes have also made another appearance. The micro SD card slot is still included to expand beyond the 32GB of internal storage as well.

While we don’t know specifics about the dimensions or weight, it’s expected to be the same thickness as the One M9, albeit with a bigger screen and the inevitable taller and wider body.

The most noticeable change is the addition of a physical home button, which breaks up the front-facing Boomsound speaker below the screen. The home button joins Apple and Samsung by including fingerprint recognition technology, which is likely to work in the same fashion as the scanner featured on the back of the HTC One Max. That means this is primarily going to be an additional way to unlock the phone. It was pretty unreliable on the One Max, so we hope the multi-directional sensors embedded into the home button have vastly improved.

SEE ALSO: HTC One M9 vs One M8: An in-depth comparison 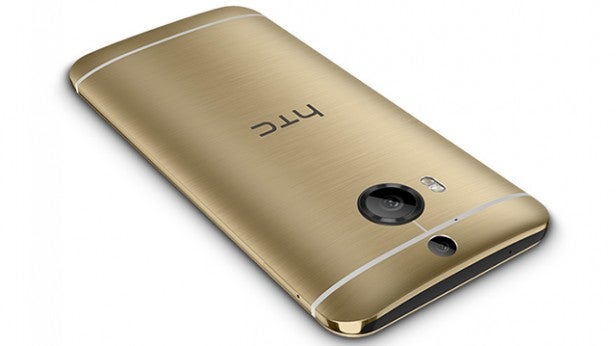 The One M9+ has a 5.2-inch screen. This makes it only slightly bigger than the 5-inch offering on the One M9, but considably smaller than the Note 4’s 5.7-inch screen and the 5.5-inch screen on the iPhone 6 Plus, as had initially been rumoured. That should mean it’s unlikely to be that different to hold or take that much more space up in your trouser pocket.

The bigger change here is the resolution. We were hoping for a 2K display on the One M9, but HTC decided to stick with a near identical LCD screen to that used on the One M8. With the One M9+, it’s packing in more pixels with a 1440 x 2560 resolution display to match the resolution on the Galaxy S6, S6 Edge and the LG G3.

It’s the same Super LCD 3 screen and that’s no surprise as HTC’s phones have been packing this display technology for some time. With a vastly improved 540 ppi pixel density it should still be one of the sharpest smartphone displays available. We’re hoping HTC cranks up the screen brightness like it did for the One M9 as well.

While the One M9 is packing the 64-bit Snapdragon 810 CPU, HTC has traded that in for a MediaTek Helio X10 core processor, accompanied by the same 3GB of RAM. Like the One M9, the 64-bit processor spreads the workload of the phone across the two sets of quad-core processors with one set assigned to low-power tasks and the other for more intensive features like streaming video. That should ensure a similarly rapid performance and improved efficiency to make the phone last longer in between charges.

Sense 7 and Android Lollipop all round

Both the One M9 and the One M9+ ship with the latest Sense 7.0 UI mash-up with Android Lollipop 5.0.2 as the foundations. It’s one of the sleekest approaches to Google’s mobile operating system we’ve seen to date. On the Android side, the improved lock screen notifications is the most noticeable new addition. On the Sense front, there’s the new HTC Themes, Sense Home widget and refined Photo Editor to go alongside stable Sense features like Blinkfeed and gesture-based Motion Launch. 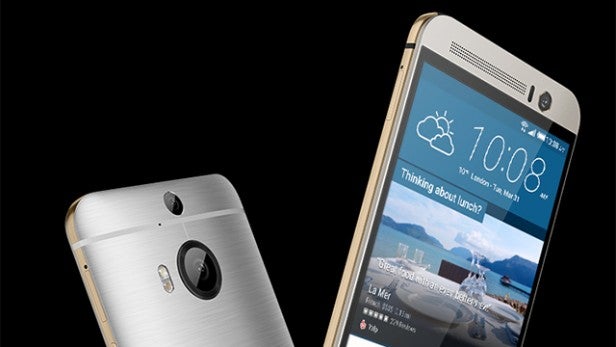 The Duo camera is back, on the back…

Like the One M9, the disappointing 4-megapixel Ultrapixel camera has moved to the front of the phone to improve selfies and that’s definitely a good thing. Around the back is a 20-megapixel sensor with a M9-matching 27.8mm lens. Unlike the One M9 though, it’s the same a Duo camera setup as the One M8 and the One M8s. So you can capture that additional depth data for those bokeh-style snaps.

Video recording is the same as the One M9 well letting you shoot at a maximum 4K from the main sensor and 1080p HD on the front.

All square in the battery department

HTC is sticking with the same 2,840mAh battery capacity as the One M9 and the newly announced One M8s. It’s a little surprising when you consider the One M9+ hosts a larger, higher resolution screen. That more demanding 2K screen is inevitably going to have an impact on battery life as it does on Samsung and LG’s phones.

While we expect the same power saving modes to be included on the One M9+, without a Snapdragon CPU, it’s unlikely to support the Quick Charge technology to rapidly power up the battery, which is disappointing.

When you compare the specs of the One M9 and the One M9+, the slightly bigger HTC handset sounds more like the flagship phone we hoped the One M9 would be. There’s the improved screen resolution, the inclusion of a fingerprint sensor and the reworked camera setup. The decision to make the screen only fractionally bigger than the One M9 as opposed to a Note 4-rivalling screen makes the decision an even stranger one.

At the moment, the decision between the two is not something you need to worry about right now, but if we had the choice, we’d definitely go for the One M9+.