HTC has unveiled the One M8s, another metal smartphone that sits somewhere between the One M9 and the One M8. Here’s how the specs match up

Think choosing between the One M9 and the One M8 was hard enough already? Well, HTC has also announced the One M8s as well to make the decision more difficult.

Set to hit the UK from the beginning of April with a sub-£400 price tag, we’ve surveyed the specs sheet of the 4G LTE-friendly One M8s to see how it compares to this year’s and last year’s flagship phones from HTC.

HTC is sticking with the same aluminium unibody look for the One M8s although it’s not clear if it’ll have the slightly glossier curved back as the M8 or the more grippy finish on the M9. We’d be inclined to think it’s going to be the latter.

It measures in at 9.55mm thick so sits right between the M9 (9.6mm) and the One M8 (9.4mm) for slenderness. It also weighs the same 160g as the One M8 so it’s unlikely to be a radically different proposition to hold and slip into your pocket.

The front-facing speakers are still in tow, it uses a nano SIM card and it’s available in the same colours as the One M9. From our time with the other HTC handsets, we’d say the Gunmetal Grey is arguably the best looking shade you’ll want to grab it in.

SEE ALSO: Living with the One M9 and One M8 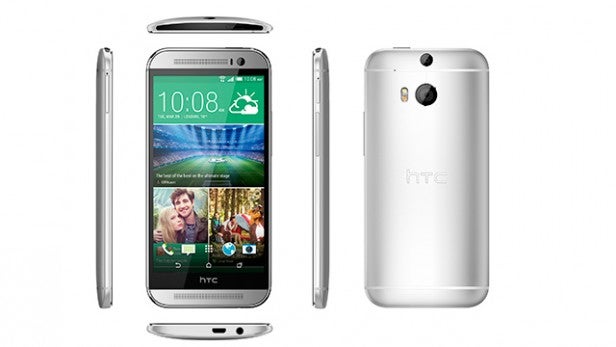 Full HD screens all round

Something you’re not going to miss out on with the One M8s is screen quality. This is the same 5-inch, Full HD 1080p resolution LCD screen you can find on the M9 and the One M8. That means it squeezes in the same pixel density to deliver the impressively sharp picture quality. While it’s unlikely to be on par with the gorgeous ‘2K’ QHD AMOLED screens you can find on the Samsung Galaxy S6 and S6 Edge, it’s going to more than suitable for most. HTC hasn’t divulged details on brightness, but we hope it has more in common with the M9 than the M8 on that front.

It’s the same Sense as the One M8

The One M8s runs on Android 5.0 Lollipop with HTC’s sleek Sense 6.0 overlaid on top. That’s exactly the same as the One M8 and that’s not really a bad thing in our book. You’ll get all the basics like Blinkfeed and the gesture-based Motion Launch, although you’ll miss out on the somewhat gimmicky Themes, Sense Home widget and the new Photo Editor. We probably shouldn’t rule out the One M8s getting the latest Sense maekover. HTC has already confirmed the One M8 will receive a 7.0 update, so hopefully the One M8s will get it as well. 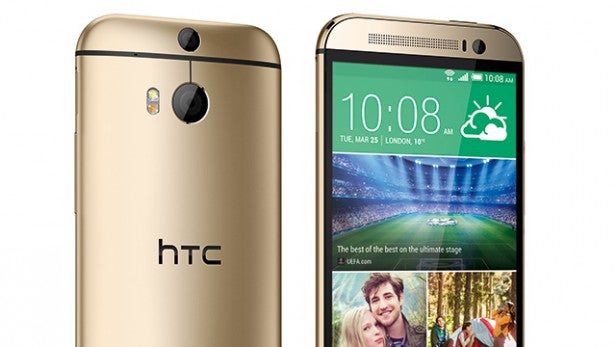 Processor downgrade with One M8-matching RAM

While the One M9 is packing the top end Snapdragon processor and the One M8 did the same when the 801 was top of the Qualcomm processor ladder last year, the One M8s in contrast is powered by an octa-core Snapdragon 615 processor alongside 2GB of RAM. As an octa-core setup, it uses the two sets of quad core processors for different tasks to ensure optimum performance across all the phone’s features.

Like the Snapdragon 810 inside the One M9, this is a 64-bit processor so not only is it equipped for more demanding tasks like gaming, it ashould be well optimized for Android Lollipop, which now offers native 64-bit support.

Less internal storage, but you can upgrade

If you like having plenty of space to save photos, games, apps, and pretty much anything else you’d want to save to your phone, the One M8s only comes in a 16GB option. The One M8 and One M9 in comparison have 32GB options as well as 16GB models. Fortunately, you do still get a micro SD card slot, giving you the option to bump things up with a 128GB micro SD card. You can grab one of those for around £60-70 on Amazon though, so it’s not cheap. 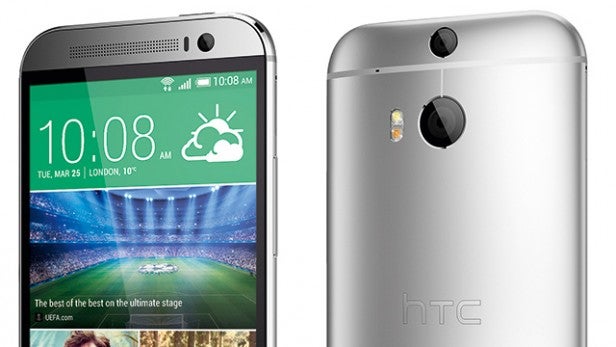 More One Mini 2 than a One M9 camera

HTC decided to make some drastic changes with the M9’s camera after the One M8’s setup struggled to cut it in comparison to Samsung and Sony’s 2014 flagship phones. For the One M8s, HTC has modelled the camera setup on the One Mini 2 offering a 13-megapixel sensor on the back with a decent sized 28mm lens, and a 5-megapixel front-facing camera. There’s no Ultrapixel tech in sight, although you do get the Duo Camera to capture the additional depth data and create those bokeh-style effects first seen on the One M8.

For shooting video, you can film up to a maximum 1080p HD, which is no big surprise. Yes, 4K is missing, but that’s not a major issue as doing it on the One M9 and One M8 restricts camera modes and limits the amount of time you can shoot to around 5 minutes.

M9-matching battery life with Quick Charge on board

HTC is packing the same 2,840mAh capacity non-removable battery in the One M8s as featured inside the One M9. We fully expect the same power saver modes to be included and we’re glad to see Qualcomm’s rapid Quick Charge 2.0 tech is included as well. HTC suggests that should get you around 20 hours of talk time and as much as 750 hours standby time. That of course, depends on how much you use it and from our time with the One M9, the bigger battery doesn’t necessarily mean better battery life. If it can get anywhere near the two days you can get on moderate use with the One M8 though, we’ll be happy.