iPhone 6 or iPhone 6 Plus? We help you decide which of Apple’s last generations smartphones you should buy

If you’re not planning on buying the iPhone 6S or iPhone 6S Plus, there’s still plenty of life in the iPhone 6 and iPhone 6 Plus. Yes, you’ll miss out on the improved camera and 3D Touch, but those are things most of you will be able to live without, if we’re being honest.

To those still trying to weigh up the benefits of going bigger or sticking with a ‘smaller’ iPhone, we’re here to help make that decision to pick between the two a more informed one.

We know they both look good. Perhaps not Galaxy S6 or S6 Edge good, but they are two of the best designed smartphones on offer right now. We know both have a strong list of specs, but what are they like to live with on a day-to-day basis?

Watch our iPhone 6 vs iPhone 6 Plus video

iPhone 6 vs iPhone 6 Plus: Design

The iPhone 6 and iPhone 6 Plus look identical, but they do inevitably differ in the size and dimension departments.  With the iPhone 6 Plus, you’re getting a 2cm taller, 1cm wider and 2mm thicker phone. It doesn’t sound like a lot, but it clearly makes a huge difference when you handling the two iPhones. 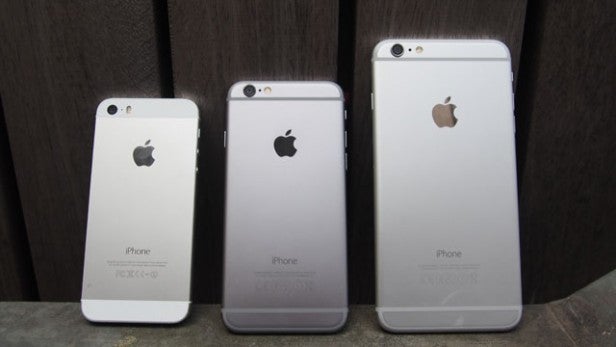 Using the iPhone 6 Plus one handed is a dramatically different experience to holding the iPhone 6 and is likely to be a major factor for most picking between the two. Thankfully, it’s not as bad as something like the Nexus 6, but it’s going to be trickier for smaller hands. Reaching over the other side of the virtual keyboard is not easy to do for instance. You got little chance reaching your thumb to the top of the screen as well.

Some will get used to it though. It’s not instant but like the Note 4, it handles its large stature well and does begin to feel more natural after a week or so.

If you’re reticent to move to a big phone, then the iPhone 6 is going to be a better fit. It’s still a bit of jump on the 4-inch iPhone 5S, but Apple strikes a good balance between giving you the extra screen estate and making it easier to handle than the 6 Plus.

While these are arguably not the most memorable phones from a design perspective, but as we’ve come to expect from Apple, they are beautifully designed and built to take some everyday rough and tumble. The screen is the most at risk of damage so Apple has included toughened glass on both displays. That’s not stopped a few of the TR team cracking their iPhone screens, but it’s not the only phone that has not survived an accidental drop on the floor.

Without a case the iPhone 6 Plus feels like a liability. A case increases the dimensions even more but also makes the phones a lot more manageable thanks to the added grip.

Both phones are well crafted, but the smaller size of the iPhone 6 means it’s more ergonomic. It wins the design round.

iPhone 6 vs iPhone 6 Plus: Screen

Let’s get the obvious one out of the way. The 6 Plus has a bigger screen. That means you get more room to browse, watch films and play your games.

But there’s more to it than that and that’s because with the 6 Plus, you get a higher resolution display in comparison the 6. The iPhone 6 Plus features a full HD 1080p screen and offers a 401PPI pixel density to deliver the exceptional clarity. The iPhone 6 has a 1334 x 750 resolution screen with a 326ppi pixel density. Hands down, the The 6 Plus has the sharper display but that’s not to say that the one on the 6 is bad.

In a world where Samsung and LG are offering high resolution screens, Apple’s displays might not sound as cutting edge. But we still love them and they offer solid all-round performance.

you won’t notice it too much unless you bring the phone up to your nose.

Related: iPhone 6 Plus vs Galaxy Note 4 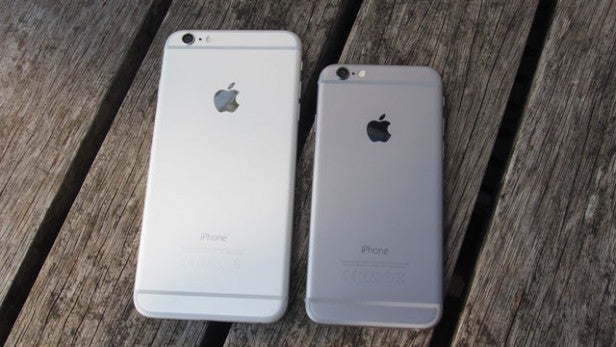 iPhone 6 vs iPhone 6 Plus: Camera

Apple’s phone cameras are among the best in the business. They’re easy to use, come with a really straightforward camera app and most importantly take really good photos.

Starting from the front, both have identical cameras so you can expect to get the same level of selfie and Facetime quality. Low light photography is not fantastic, but then the same criticism could be levelled at most front-facing cameras you’d find on most flagships these days.

The rear cameras are similar too. Both use 8 megapixel sensors with 1.5 micron sensor pixels, dual tone flash and include phase detection, which help the iPhones focus with speed.

The major difference here is that the iPhone 6 Plus comes with optical image stabilisation (OIS). This helps you take better photos by eliminating the blur caused by the small hand movements you make when taking a picture. 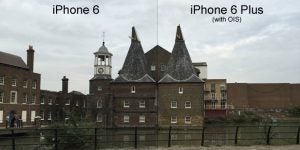 In well-lit conditions you won’t notice much difference because the camera can shoot fast enough to minimise the effects of small shudders. When the lights go down the OIS on the 6 Plus shows its worth. Photos are sharper and colours more vivid when it’s dingy, and this applies to video as well. 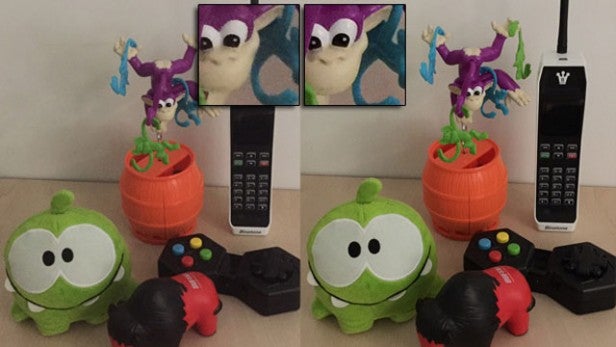 In low-light the OIS on the iPhone 6 Plus helps

Both phones have great point and shoot cameras, but the OIS makes the iPhone 6 Plus the better camera phone.


iPhone 6 vs iPhone 6 Plus: Software

The iPhone 6 and 6 Plus are both now capable of running on iOS 9 just like the new iPhones. That means you to enjoy new features like the power saving mode and improved Apple Maps. It also brings a raft of changes including the additon of Apple Music. The experiences across both are pretty much identical barring the landscape mode you only get on the 6 Plus Even though the screen is bigger you get the same amount of apps viewable on your home screen – 20 in total.

iOS 7’s radical design makeover remains the same on iOS 9 but Apple has delivered some new features that make it a better operating system. A mixture of Android-esque features and some new additions help lay the foundations for a greater push into health and home automation over the coming months.

You can now add third party keyboards, use widgets, access apps from the new notification centre and have the ability to work across Mac and iOS devices in more intuitive way. Apple’s own keyboard has also had a bit of a makeover with predictive words now making an appearance.

The iPhone 6 Plus’s larger display also means that you get a few more keyboard shortcuts in landscape mode.

iPhone 6 vs iPhone 6 Plus: Performance

Apple’s new A8 is in both phones and it’s a great processor. It uses a 64-bit dual-core 1.4GHz CPU with a PowerVR GX6450 quad-core graphics chip supported by 1GB RAM.

In our benchmark tests both phones perform extremely well and beat much of the competition in graphics intensive tasks. That’s good news if you like gaming on your phone.

An M8 co-processor also makes an appearance. This looks after all the sensors on the phone and manages the data in a much more energy efficient manner, which means better battery life. 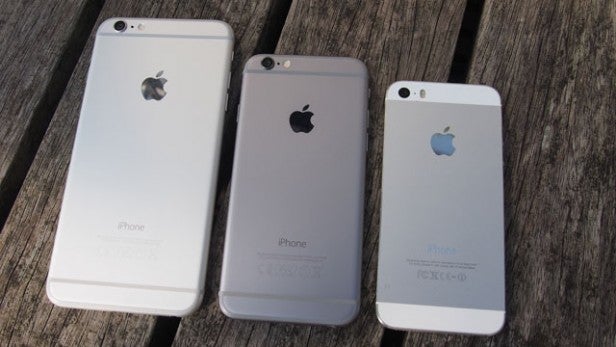 iPhone 6 vs iPhone 6 Plus: Storage

Neither of the new Apple phones offers expandable memory. However, the iPhone 6 and iPhone 6 Plus do raise the storage ceiling, from 64GB to 128GB.

An iPhone 6 Plus with 128GB of internal storage is dream for watching movies on, offering enough memory for a hundred or uncompressed SD-quality films or 25-plus HD ones. It’s going to cost a whole lot of money to own it if you buy the iPhone outright though.

iPhone 6 vs iPhone 6 Plus: Battery Life

If you think the larger iPhone comes with a larger battery then give yourself a pat on the back because you are absolutely right. The iPhone 6 Plus has a 2915mAh battery compared to the 1810mAh one on the iPhone 6. It means that the iPhone 6 Plus blows its little brother out of the water when it comes to stamina.

If you are a normal user you will be able to make the 6 Plus last two full days, which puts it up there with 2014’s flagship Android phones like the Xperia Z3, One M8 and the Samsung Galaxy S5. It just keeps going and going. The iPhone 6 isn’t bad by any means, it just doesn’t come close to matching the Plus. You’ll easily get a day of use out of it but it’s a phone that you will likely want to charge daily.

In our like for like tests running standard definition video until both phones run out entirely the iPhone 6 Plus lasts for 12 hours while the iPhone 6 for 10 hours.

However, the smaller size of the iPhone 6 means that you can plonk it into a charge case without it becoming too cumbersome. It’s not the most elegant solution, though.

iPhone 6 Plus vs iPhone 6: Price

These are Apple phones so they were never going to be cheap but the iPhone 6 Plus is more expensive weighing in at a whopping £789/$949 for the top specification 128GB version. By comparison the same spec iPhone 6 costs £699/$849.

If you do decide to buy one of these phones we’d recommend going for the 64GB one unless you like to store lots of media or tinker with video editing on your phone.


The 16GB versions only have 11GB of usable memory. That’s not much at all and the lack of a microSD card means you can’t add storage later. If that’s important it’s well worth considering the Samsung Galaxy Note 4, Sony Xperia Z3 or HTC One M8.

iPhone 6 vs iPhone 6 Plus: Verdict

Big or small? Apple has taken real pains to make sure the iPhone 6 and iPhone 6 Plus offer a consistent experience. Similar screen tech, the same processor and similar-grade cameras make sure there’s no weak link here.

However, we do like that the extra display space of the iPhone 6 Plus and its greater battery life makes it more of a power user device.

iPhone 6 or iPhone 6 Plus? Has this helped you decide? Let us know in the comments below.