iPhone 6S vs Galaxy S7: Apple vs Samsung battle it out for mobile domination

The Samsung Galaxy S7 is now on the market, heralding the next round in the ongoing Samsung vs Apple smartphone grudge match.

Now that our review is in, we can confirm that the Galaxy S7 is a serious contender for the top smartphone crown. It might pack a familiar design, but a faster CPU, improved battery, and a stunning-looking camera could well be giving Apple more cold sweats than the FBI.

Of course, it wasn’t too long ago that Apple released its iPhone 6S flagship. Many saw that phone as one of Apple’s best ever ‘S’ devices, so it’s not like Samsung has the market all sown up right up until the launch of the iPhone 7.

Here’s a step-by-step breakdown of Samsung’s new handset and how it stacks up against Apple’s current iPhone.

The Galaxy S6 was the prettiest phone Samsung’s ever made by quite some margin. It ditched the horrid plastic backs seen on past Galaxy phones, replacing them with a wonderfully luxurious mix of glass and metal. The design made the Galaxy S6 look and feel premium.

However, its design still didn’t completely beat Apple’s. While the iPhone 6S’s design doesn’t radically differ from its predecessor, the iPhone 6, it remains one of, if not the best put together phones on the market. true, it may not be as iconic as the iPhone 4 or iPhone 5, but it’s a much more pleasant phone to use day-to-day.

It’s curvier and somehow warmer than previous iPhones. What’s more, with Apple’s use of Series 7000 aluminium, it’s also tougher than before. 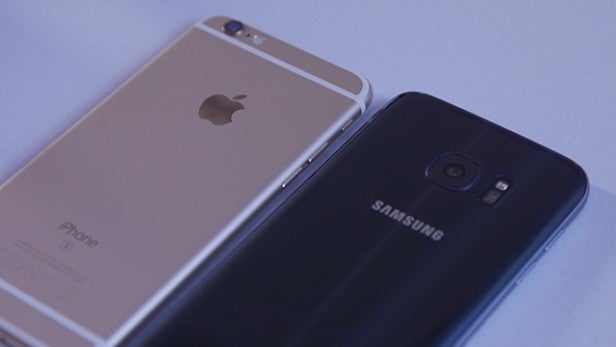 However, picking between it and the Galaxy S7 is tricky, as Samsung’s made a number of small but important design changes to its latest flagship. The camera sensor bump is gone and Samsung’s added a few millimetres to the thickness by adding a slight curvature to the back, reminiscent of the  Galaxy Note 5.

This thickening is actually a considerable improvement, making it much more comfortable to hold and less prone to slipping out of your hand. It also means that the Galaxy S7 is a lot easier to pick up from a flat surface, which is an important attribute.

What’s more, Samsung somehow managed to make the gorgeous looking Galaxy S7 IP68 certified. This means that, unlike the iPhone 6S, the Galaxy S7 can survive an accidental aquatic encounter unscathed. That this has been achieved with no external signs of ‘ruggedisation’ – flaps, a thicker display etc. – is impressive.

Samsung’s design hasn’t really gotten any prettier this year, then, but it has become a lot more practically sound. That’s just as important as aesthetic considerations, if not more so, and it’s enough to give the Galaxy S7 a win over the iPhone 6S in this area.

The Samsung Galaxy S7’s display is very similar indeed to the S6’s. This means that once again it is radically sharper than the iPhone 6S’s screen, and once again displays deeper blacks thanks to its Super AMOLED tech.

For those that don’t know, AMOLED screens display deeper and richer blacks by electrically charging each individual pixel when generating colours, letting them create blacks simply by turning off the relevant pixels. LCD technology lights up all pixels, even when they’re displaying black, making for a slightly washed out grey look. This means that the Galaxy S7, like the S6, has a more vibrant and sharp display than the iPhone 6S.

Of course, some will argue that AMOLED screens tend to be oversaturated, making films and pictures look false and other worldly. But Samsung, as always, offers a number of screen tone options so that you can attain a more naturalistic picture if you so wish. 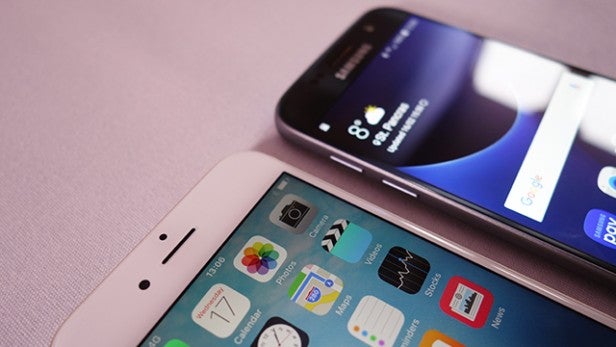 That Galaxy S7 screen also has a cool new always-on feature. The feature is a low power screen mode that activates when the phone is put to sleep. It offers peek views of incoming notifications and alerts from certain services, meaning you can check who’s messaged you without having to fully power up the display.

However, we felt that this always-on feature was a little half-baked, with limited functionality and poor app support. It’s a nice idea, but it isn’t truly useful yet.

The Galaxy S7’s screen also doesn’t feature a competitor to  Apple’s 3D Touch tech. 3D Touch is a nifty feature that lets the iPhone’s screen detect varying amounts of pressure. It can be used to enact a variety of tasks, like previewing emails and websites. For iPhone 6S owners familiar with 3D Touch, the lack of an equivalent feature on the Galaxy S7 could be a sticking point.

The Galaxy S7 is powered by Samsung’s own Exynos 8890 processor in most territories, including here in the UK. Our US cousins get the more general, off-the-shelf (but still highly capable) Snapdragon 820. 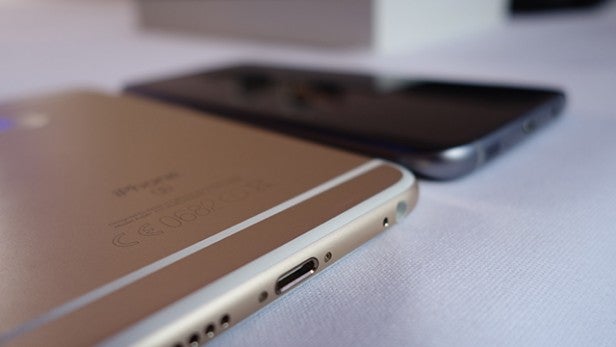 Our own extensive hands-on time with the Galaxy S7 bears this performance boost out. Games in particular absolutely fly on this phone, whether it’s the fast-paced 3D racing thrills of Asphalt or the detailed 2D puzzling of Lara Croft Go.

The iPhone, meanwhile, has the dual-core A9 chip and 2GB of RAM. That combo matched the S6, and even exceeded it in general usage, but Samsung holds the advantage – at least until the iPhone 7 arrives.

Our multicore CPU benchmark tests showed that the Galaxy S7 had a clear lead over the iPhone 6S for high-end tasks.

The iPhone 6S is no slow poke when it comes to snapping photos. The phone’s automatic mode is one of the best we’ve seen on a smartphone and makes it quicker and easier to take great photos without having to get bogged down in complex settings.

It’s only drawback is its lack of optical image stabilisation (OIS), a factor that, combined with its lower f/2.2 aperture meant it struggled to compete with the Galaxy S6 in low light.

The Galaxy S7 widens the gulf in that respect, employing a number of techniques to help boost its low light performance.

For starters Samsung’s loaded the Galaxy S7 with a new 12-megapixel sensor – actually less than its predecessor – that’s been designed to capture bigger pixels, and as a consequence more light. 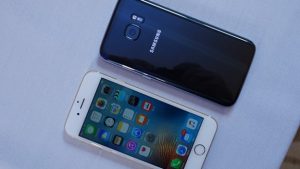 The lens aperture has also been widened to f/1.7, meaning that much more light can physically enter the lens than with the iPhone 6S. Samsung claims the combination of factors mean the Galaxy S7 can capture 95 percent more light than its predecessor – which much equate to a whole heap more than the iPhone 6S.

Our own snaps seem to confirm this, with significantly better results in dark conditions for the Samsung phone.

But it’s not just in low-light performance that the Galaxy S7 camera betters the iPhone 6S. It also has the best autofocus system we’ve ever seen in a smartphone. It’s ridiculously quick and accurate.

The iPhone 6S camera remains one of the best in the business for general snaps in good lighting, in which the colour accuracy and general look is often preferable to the Galaxy S7 equivalent. But overall, the Galaxy S7 is the better photographic tool – especially when you factor in its handy home button shortcut and tweakable Pro mode.

Samsung’s only loaded the Galaxy S7 with 32GB of internal storage. By comparison the iPhone 6S is currently available with 16GB, 64GB or 128GB of internal space.

So, a win to the iPhone, right? Not quite.

While the additional options are nice, and we wish Samsung had followed suit and offered more, the entry-level Apple offering is pretty much hopeless. 16GB is completely inadequate for a modern flagship phone. 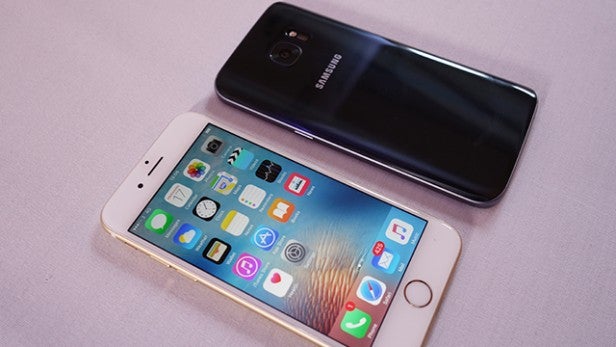 Also, unlike last year’s Galaxy S6, the Galaxy S7 allows you to bolster its fixed storage with a microSD slot. Unfortunately, Samsung has shot itself in the foot somewhat by refusing to take up Google’s Adoptable Storage facility.

This feature effectively turns any inserted microSD card as part of the core system storage. As it is, you can shift photos, files, and some apps to the microSD card on the Galaxy S7, but you’re otherwise much more limited as to its usage.

Traditionally Samsung’s insistence on loading Android smartphones with Touchwiz has been a key issue hampering their ability to compete with Apple iPhones.

As well as making Android’s UI feel a little cluttered, the skin loaded past Galaxies with more bloatware than could easily be counted. What’s more, the skin also radically delayed how quickly Samsung’s phones could be upgraded to new versions of Android. This is because Samsung needs to tweak Touchwiz to work with Google’s code with every new release.

To this day many Galaxy S6 smartphones have not been upgraded to Google’s latest Android Marshmallow operating system.

Sadly (but predictably), Samsung doesn’t seem to have learned its lesson with the Galaxy S7. It’s better than before, but it still has TouchWiz and a stack of unnecessary extra apps. You still get two browsers and two music players, for example.

Some of Samsung’s additions are quite nifty, such as the new Game Launcher that organises your games and lets you record footage of your exploits. But they’re rarely essential additions to the core Android experience.

Say way you like about Apple’s closed management of iOS, but it has let the company ensure device owners are always able to get software updates – so long as the iPhone, or iPad’s hardware is able to run it. It also makes for a much cleaner, smoother, more consistent experience than Samsung can achieve with TouchWiz on the S7.

Samsung’s managed to do great work fixing the bloatware issue on the Galaxy S7 and should be applauded for preloading it with Android Marshmallow. However, we’re certain the upgrade issues will persist. From a pure software perspective, the iPhone 6S remains the better phone.

At first glance, it looks like the iPhone 6S is cheaper than the Samsung Galaxy S7, which plays against expectations somewhat. Prices for Apple’s phone start from £539, while Samsung’s latest will start from £569.

Look a little closer, though, and you’ll see that the entry-level iPhone 6S in question comes with a piddly 16GB of storage. Combined with a lack of expansion potential, it’s a bit of a lame duck. Samsung starts off with a much more reasonable 32GB of storage, not to mention a microSD slot of expansion.

The next phone up in the iPhone 6S range comes with 64GB of storage, and that costs a hefty £619.

Of course, at least Apple provides you with such fixed storage options, as we’ve mentioned above. But you’ll pay a hefty premium for the top model at £699.

The Galaxy S7 is an absolute beast of a smartphone that aces the smartphone holy trinity of design, performance, and camera. As such, it’s a more than worthy rival to the iPhone 6S.

Samsung’s phone features a much better display, a generally more capable processor, twice the memory, and a better camera. We’d still take iOS over Samsung’s fussy TouchWiz UI any day of the week, but in most other respects we’d have to give the nod to the Galaxy S7.

However, this isn’t really a surprise. Apple’s iPhone 6S is already over halfway through its lifecycle as a flagship smartphone. Samsung’s real competition awaits six months down the line.

Let us know how you think the Galaxy S7 compares to Apple’s iPhone 6S in the comments section below.