As is typical with Apple’s iOS updates, it’s received multiple point upgrades throughout its lifecycle. The latest, iOS 9.3, even adds in a clever new feature called Night Shift. This reduces the blue light coming off the display before you go to sleep, which is supposed to help your slumber. It makes the screen go a strange orange colour that might be off-putting at first, but you’ll get used to it after a couple of days.

iOS 9 was pretty free of bugs to begin with, but it’s only gotten smoother as the time has gone by. It’s still quick, responsive and a pleasure to use. The multitasking features added have become more and more useful as a load of apps have started to support them, but if you’re using an iPad Pro 12.9-inch you might wish you could have more than two apps at once.

Of course, you might not be running iOS 9 for that much longer. Apple has announced the dates for its WWDC and this is where we’ll likely see the release of iOS 10.

In the simplest terms, iOS 9 is the latest version of Apple’s mobile operating system. It powers all the the brand’s iPads, iPhones and iPod Touches and while it’s not the biggest jump from last year’s iOS 8 visually, it has enough tweaks, upgrades and new features to make it a worthwhile download for anyone who has a compatible device.

The more complete view of iOS 9 is that it’s the start of the next chapter of iOS. Where the iPad Air 2 and 9.7-inch iPad Pro gains more productivity tools, Siri is not just a computerised voice behind a button press and developers can have a bigger influence on everything from search to blocking content in Safari.

It’s a great, if slightly rough around the edges, update that might not convince Android die-hards to switch, but offers plenty for iOS users to get excited about.

iOS 9 is free to download for iPhone 4S and above, iPad 2 and above, iPad Air 1 and 2, every iPad mini and the 5th and 6th generation iPod Touch. It comes pre-installed on the new iPhone SE.

Design changes in iOS 9 are few and far between. But there are a couple worth mentioning.

The biggest is the new San Francisco font – the same type-face Apple designed for the Apple Watch. It’s slightly bolder and a little wider than before, but doesn’t really make that much difference. 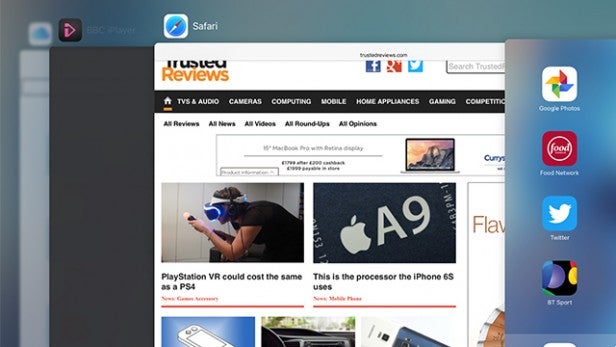 In what seems like a change for the sake of it – or to make better use of 3D Touch on iPhone 6S/6S Plus – the multitasking view has been switched from individual cards to a scrolling, rolodex style. It’s a bit like Android’s Overview, but flipped on its head. I don’t like it. It adds nothing, but removes the handy contact shortcuts and makes it harder to see what apps you’ve got open.

I do approve of the new ‘Back to app’ button, though. In previous versions of iOS 9, if you opened up a link in a message you’d have to go back the home screen and back into Messages to return to what you were doing. Now a ‘Back to Messages’ instantly takes you back. Handy.

Notifications, one of the weakest parts of iOS, haven’t really been improved on iOS 9. There’s still no ‘Clear all’ button, it’s finicky to accurately hit the ‘X’ to dismiss something and they lack the polish that makes them one of Android’s stand-out features. However, at-least notifications are now grouped by time rather than app.

Siri’s transformation in iOS 9 is massive. The digital assistant first introduced with the iPhone 4S is no longer a feature stuck behind a button press, but a vital part of the operating system.

I used to feel Siri was one of the iPhone’s weakest elements. It didn’t have the down-right usefulness of Google Now’s card based UI, nor the accuracy and speed of Cortana. Thankfully, iOS 9 rights many of those wrongs. 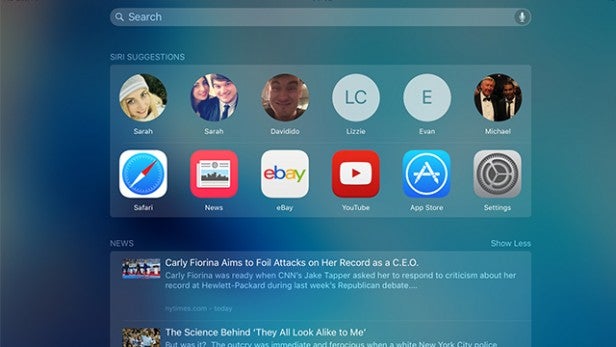 A swipe right from the first homescreen – sound familiar? –  takes you straight into Siri’s new home. Apple claims she is now more ‘proactive’ than before, so this pane houses recently used contacts, apps you’ve been using a lot (or just installed) and a few, seemingly random, news stories from the web. I assume this will tie in with Apple News when it hits the UK, but for now it just takes you directly to the website.

There’s also a search bar at the top – I’ll get deeper into this shortly – and a microphone icon if you prefer to rather speak your requests.

I like the screen, especially the grouping together of apps that make them easy to get to. But there’s no pinning of contacts or apps, and you can’t delete or hide any of them. I guess this is an area that will grow with future updates, but it’s a good start.

A long press on the Home button from anywhere still brings up Siri herself, or himself if you’re in the UK, but the voice-assistant has picked up a few more tricks. I can ask it to show ‘pictures taken in Australia’ and the results will instantly pop up, or be more specific and say ‘show me pictures from April 2014’. Obviously, and annoyingly, this is limited to Apple’s app. Results won’t show up from Google Photos, for example, or Spotify. 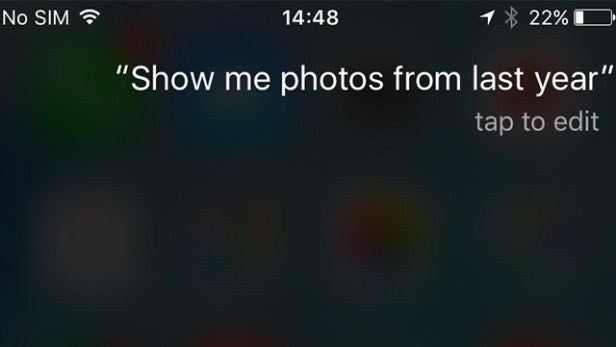 For some reason, Siri seems to have trouble understanding my British accent – not that I have a particularly strong one – but in the instances it’s understood in one results come up in a flash. A definite speed improvement over iOS 8.

But, easily the coolest feature of the improved search and Siri features in iOS 9 is deep-linked Spotlight. Before, results from the search bar – accessed by a swipe down on the homescreen – would be limited to Apple’s own apps. A search for ‘football’ would bring up any mentions in Mail, Messages and so on. Now, app developers can let it search their apps too. 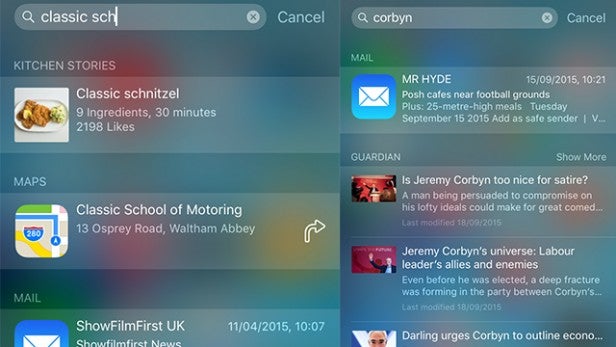 So a similar search now brings up results from The Guardian’s app, while a search for ‘fried chicken’ brings up recipes from cooking apps. When it’s integrated in more apps, this will be a killer iOS feature.