But it’s not the only change Apple has made to its tablet blueprint this year. We’re going to take a look at every element of the new model to see how it’s changed from the first-generation iPad Air model.

Then we’ll ask: should we all be saving up for an iPad Air 2? 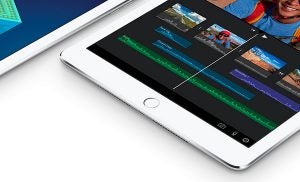 The iPad Air 2 is a fair bit thinner than the old model. That’s pretty impressive when the original Air was just 7.5mm thick.

Apple’s second model is 6.1mm thick, making it – drum roll, please – the new thinnest tablet in the world. Before now, the Sony Xperia Z2 Tablet was the thinnest we’d seen.

Is the slimmer waist worth upgrading for? Probably not, but losing a bit of weight does make the iPad Air 2 feel handier when you’re using your tablet out and about.

As ever, the iPad Air 2 is made using aluminium. However, this time you can also choose a gold finish.

The original iPad Air comes in dark grey and silver finishes, not gold. So the new model is good news for you bling-fanciers out there.

You also get a Touch ID sensor, the fingerprint scanner seen in the iPhone 6 and iPhone 6 Plus. You can use it to unlock the phone, and as a way to avoid having to enter your iTunes password. It’s neat, but not essential if you’re looking for reasons to upgrade.

At first look, it seems like Apple hasn’t changed the display of the iPad Air 2 all that much. It’s still 9.7 inches across, and still uses the same core screen technology – an IPS LCD screen, with a resolution of 2048 x 1536 pixels.

Could resolution be higher? Probably, but not while offering a slimmer body plus the same 10-hour battery that iPads have offered since their earliest days.

Apple has made a few optimisations, though. The air gaps that exist between the screen layers of other tablet displays have been eradicated by a screen lamination process.

It’s this that enables the iPad Air 2 to be as thin as it is, but it has other benefits too.

Getting rid of air gaps makes the image appear closer to the surface of the screen, giving more of that pop we’re after. It also helps reduce screen reflections, making it easier to use outdoors, especially if it’s a bit bright outside.

Apple has gone to the next level in this area, too, adding an anti-reflective coating it claims is a first in the tablet market.

So while you might not immediately notice a difference between the iPad Air and iPad Air 2, it’ll fare better in trickier conditions.

As we expected, the iPad Air 2 has a much faster processor than the first iPad Air. It’s called the Apple A8X CPU, and is even faster than the Apple A8 seen in the iPhone 6.

As usual, Apple hasn’t told us the exact clock speed of the processor yet, but it has given us a few clues about its performance.

The Apple A8X offers a 60 per cent improvement in CPU speed and a 2.5x GPU improvement. Of course, this is in Apple’s own words, so we’ll have to see how it actually fares in benchmarks when we get a unit in to review.

Both tablets use a motion co-processor, which is used to monitor the sensors such as the accelerometer and – in the iPad Air 2 – the Touch ID sensor, without using much power.

The iPad Air 2 comes in 16GB, 64GB and 128GB flavours. As ever, there’s no way to upgrade the physical storage, as there’s no memory card slot. Make sure you get enough storage when you buy.

Significant improvements have been made to the iPad Air 2’s camera array. Both the front and rear cameras have been upgraded.

It’s the main rear camera that has the most interesting upgrades. Sensor resolution has gone from five megapixels to eight megapixels. The lens doesn’t seem to have been improved, though. It’s still an f/2.4 model, which is on the slow side compared with higher-end phone cameras.

While we’re not great fans of taking photos with tablets, the iPad Air 2 will certainly be able to take better ones than the older model. Apple says the image signal processor of the A8X has a big hand in this, too.

The iPad Air 2 also offers a bunch of software improvements on the camera front.

Things like slo-mo video, a burst mode, full-size panoramas and time-lapse video come to the iPad for the first time in the iPad Air 2, making it more fun to use.

In the front camera, the improvement is in the lens rather than the sensor. The lens has been upgraded to an f/2.2 model, although the sensor is still a 1.2-megapixel chip. 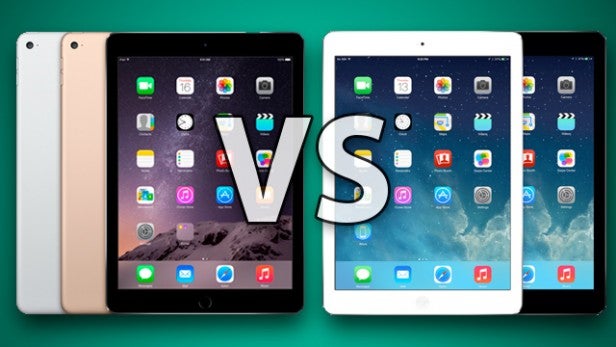 iPad Air 2 vs iPad Air: Anything Else to Consider?

As usual, there are both Wi-Fi-only and 3G/4G versions of the iPad Air 2. Apple has bolstered 4G support, but this is not something we in the UK have to worry about too much.

Different countries use different 4G bands, and by upping the number of bands supported, Apple can make the iPad Air 2 work better in other parts of the world than the original iPad Air might.

Wi-Fi connectivity has been improved, too. The iPad Air 2 finally gets on board the Wi-Fi 802.11ac train, while the original iPad Air only had 802.11n.

The former offers better range, but of course you’ll need an ac-capable router in order to make the most of it.

The iPad Air 2 is a fairly conservative upgrade, and not everyone’s going to care about some of its major updates – some people don’t like taking cameras with a tablet, and being thin is not everyone’s top priority for a tablet.

However, we do like the news of the new processor, which in concert with the Metal API could see some seriously pretty games released in the next year. And, for the more casual user, less screen reflections should prove a great bonus for outdoors use.