Apple and Google have both just announced their brand new device for 2014, meaning it might be time for you to make a decision between the Nexus 9 and the iPad Air 2.

Both new tablets face a ton of competition from the wealth of alternatives on the market, including devices like the Sony Xperia Z2 Tablet or Samsung Galaxy Tab S 10.5.

No one is expecting you to buy both tablets – unless you’ve had a sudden financial windfall – so we’re here to help you make a more educated choice as to which tablet to buy this year. 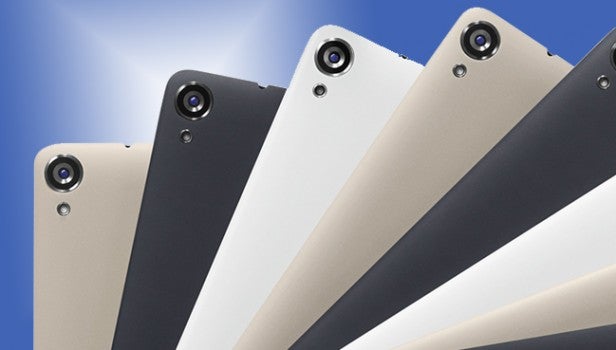 The Nexus 9 and iPad Air 2 are pretty much the epitome of the tablet market. The iPad range in general is well known for offering the top-notch build quality and premium finishes, while the Nexus range is synonymous with featuring high-end specs within a more affordable package.

It’s the same story for the Nexus 9 and iPad Air 2. The Nexus 9 is basically a super-sized version of the Nexus 5, with a soft touch plastic back and slightly angular design. It has been given a slight image tweak though, as it now has a brushed metal finish around the sides.

What’s slightly disappointing about the Nexus 9 is that although it measures up at 7.95mm thick, it’s actually one of the chunkier tablets on the market. It’s far from the lightest either at 425g. The Nexus 9 can’t compete with the likes of the Sony Xperia Z3 Tablet Compact at 270g and 6.4mm thick or the Samsung Galaxy Tab S 8.4 at 294g and 6.6mm thick.

This may well not bother you, as the Nexus 9 is a solid and robust feeling tablet that you may trust your children with more than the iPad Air 2. 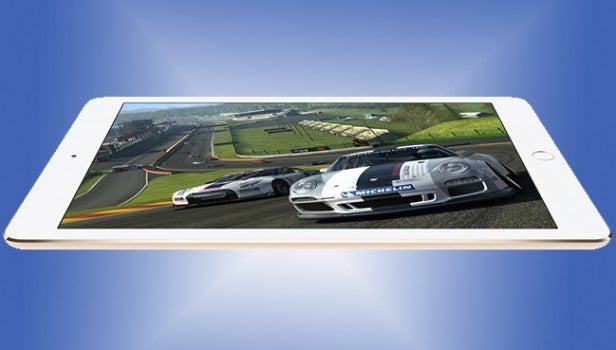 The iPad Air 2 retains the classic aluminium unibody design of its predecessor, but Apple has managed to make the 9.7-inch iPad even slimmer than it was before. At 437g and measuring up at 6.1mm thick, the iPad Air 2 is one of the thinnest tablets available on the market.

In fact Apple claims it’s the “world’s thinnest tablet” and the thinnest one they’ve ever made – 18 per cent thinner than the original iPad Air.

Of course, it’s heavier than the Nexus 9, so it’s far from the lightest tablet on the market.

As always, the Apple tablet certainly has the edge in terms of premium finish, but for that quality you’ll be forking out a little extra over the Nexus alternative.

The colour options available may also slightly sway your purchase. The Nexus 9 comes in Indigo Black, Lunar White and Sand, while the iPad Air 2 comes in Space Grey, White and Gold. 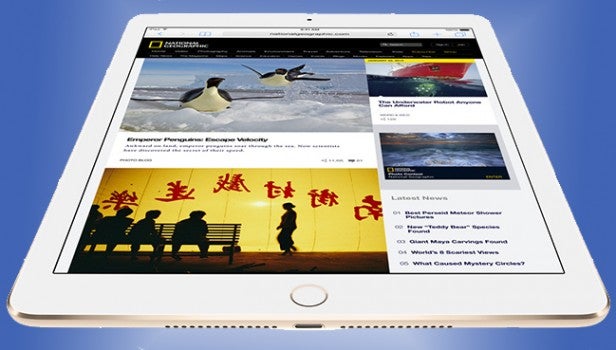 This year, you’re looking at two tablets with the same 2048 x 1536p QXGA resolution display, which is the same as the Retina display found in the previous iPad iterations. If you’ve ever played with or owned an iPad Air, iPad 4 or iPad mini 2 Retina, you’ll know that this resolution is sharp enough for all your tablet needs. It might not be full 1080p HD, but you’ll be impressed.

With that screen resolution, the Nexus 9 is a big improvement over the Nexus 7 (2013) and its 1920 x 1200p display, which was already pretty sharp and offered excellent colour reproduction.

Both tablets also feature the same 4:3 aspect ratio, rather than the usual 16:9 Nexus choice. A 4:3 aspect ratio isn’t widescreen, which is far better for running apps, games and web browsing. It isn’t the preferred aspect ratio for watching movies though, as you’ll have small black lines at the top and bottom of the video content, but that’s more than serviceable.

If the two tablets have the same screen resolution and aspect ratio, you may be wondering whether there’s any difference between the two. Well, that’s where screen size comes in.

The iPad Air 2 has a 9.7-inch display, while the Nexus 9 is a little smaller at 8.9-inches. The fact that they have the same screen resolution will therefore affect the pixel density and the sharpness of the content on screen.

The 8.9-inch Nexus 9 has an image density of 287ppi, but the larger 9.7-inch iPad Air 2 drops that image density to 264ppi. That means when placed side-by-side, content will look a little crisper and sharper on the Nexus 9. 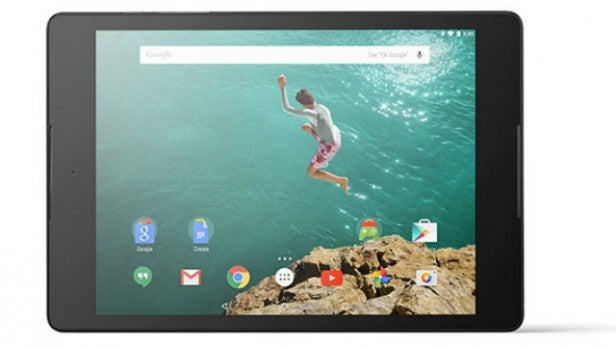 It seems like a 64-bit processor is all the rage this year, as both the Nexus 9 and iPad Air 2 features 64-bit CPU. However, this is where the similarities end. The Nexus 9’s Nvidia Tegra K1 processor and Apple’s custom A8 processor are two very different beasts.

The Nvidia Tegra K1 is the same processor found in the Nvidia Shield Tablet. It’s clocked at 2.3GHz and is packed with 2GB of RAM. That means you’ll have a speedy and responsive user experience whatever you’re doing with your new Nexus 9.

That counts for games too. The Tegra K1 has a bespoke GPU based on the same Keplar architecture Nvidia uses in its PC graphics cards. The Nexus 9 can therefore support the same APIs and systems used to build PC games, meaning a much better Android gaming experience for those who want it.

As for the iPad Air 2, that’s equipped with a new custom-built Apple A8X processor. Apple claims this second generation 64-bit processor is 40 per cent faster than its predecessor and has a 2.5 times faster GPU.

In terms of graphics improvements, it is 180 times faster than the original iPad released back in 2010.

The Nexus 9 has fairly limited purchase options. You get the choice of 16GB Wi-Fi only, 32GB Wi-Fi only or 32GB Wi-Fi and 4G LTE. Google hasn’t yet released the UK pricing for any of these, so it’s hard to say how they will compare price-wise to the iPad Air.

The iPad Air 2 has many more options available to potential buyers. Internal storage options range from 16GB to 128GB and you can either get Wi-Fi only or 4G LTE compatibility too. Of course, the 4G LTE options cost more than the Wi-Fi only versions due to their extra tech.

Sadly, Apple has cut the 32GB model, meaning there’s only the 16GB, 64GB and 128GB models. However, it has cut the price of the two top models to make them more affordable. 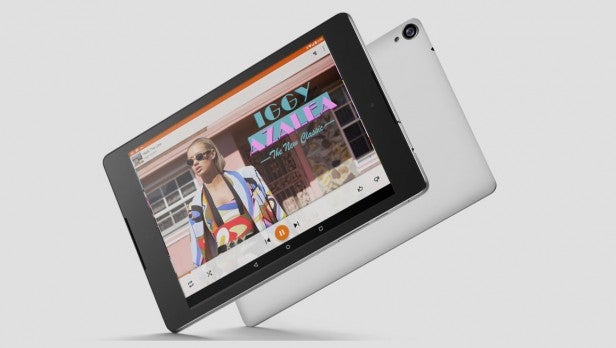 Some people may believe that a rear camera on any tablet is a waste of money and technology. However, that hasn’t stopped companies from continuing to kit out their devices with them, or from a load of people using their tablets as their primary photography gear.

That said, the iPad Air 2 has an improved 8-megapixel iSight camera in the rear. Apple claims this camera is a “huge leap forward for iPad” as it has a f/2.4 aperture and can record full 1080p HD video content.

In the front, there’s a new 1.2-megapixel FaceTime HD camera with larger f/2.2 aperture. It is capable of taking single-shot HDR photos and HDR videos. It also has improved face detection for video calling.

We’ll have to find out which camera is truly better when we have both tablets in to review. After that we’ll be able to give our final verdicts on the cameras of the Nexus 9 and iPad Air 2. 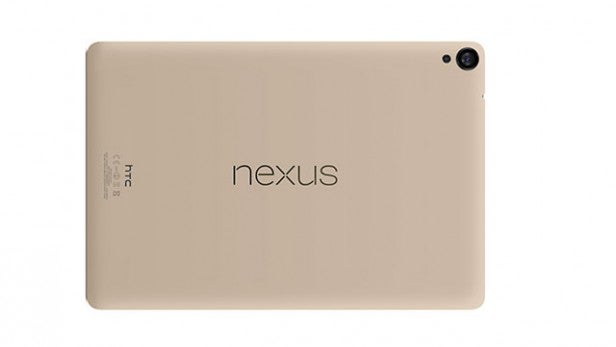 This year we’ve got two big updates to both Android and iOS in the forms of iOS 8 and Android 5.0 Lollipop.

The Nexus 9 comes pre-installed with the latest Android 5.0 Lollipop, which focuses on major improvements to the visual elements of Android. Google has done this through its Material design, which makes the overall look simpler rather than flatter, as is the way with iOS 8. Material uses lots of block colours, interface layers and real-time shadows to make Lollipop’s appearance much more aesthetically pleasing.

Along with a totally revamped look, Andorid Lollipop has a host of new features. These include dynamic notifications, increased cohesiveness across Android and Chrome devices, redesigned navigational soft keys, lock screen notifications and a new 3D multitasking menu, showing your recent apps in a Google Now fashion.

You can head to our Android 5.0 Lollipop features list to find out a little more about the new features.

As for iOS 8, Apple has made sure that its latest iOS iteration makes the continuity between all Apple products even more enhanced. The iPad Air will function more as part of the Apple family, with features shared across Mac OS X Yosemite and iOS 8 devices.

For example, you can now pick up your messages and phone calls on your iPad Air 2, activate instant hotspots and pick up documents midway through on a different device if it’s nearby.

Read more about the differences between the iOS iterations in our iOS 8 vs iOS 7 feature.

Nexus 9 vs iPad Air 2: Anything Else?

Aside from the camera and processing improvements, one of the major unique selling points of the iPad Air 2 is its Touch ID fingerprint sensor built into the home button. It allows secure entry to your new iPad with the touch of a fingertip. Plus it’s compatible with Apple Pay – Apple’s new e-wallet system.

However, it doesn’t come with NFC, so you won’t be able to tap and pay in stores – although that would look pretty silly. Instead you can use Touch ID and Apple Pay to make secure transactions online.

The Nexus 9 has some unique features too, including HTC Boomsound engineered dual front-facing speakers. These will hopefully make the sound coming out of your new tablet sound that little bit better and crisper.

Unlike the Air 2, the Nexus 9 has NFC compatibility and comes with the latest Bluetooth 4.1 connectivity.

Until we have reviewed both the iPad Air 2 and the Nexus 9 it’s hard to give a definitive answer as to which is the better tablet.

On paper, both devices feature powerful processors and enhanced graphical fidelity and no doubt we’ll be seeing improved battery life too.

The iPad Air 2 has a slightly larger screen, but thanks to matching resolutions, content on the Nexus 9 will actually look better.

As for build quality, the iPad Air 2 definitely has the edge. But it’s whether you want a tablet that large or want to pay more money for that premium finish.