Is Apple’s answer to the stylus for the iPad Pro really revolutionary as it sounds? We compare it to the competition.

Alongside the iPad Pro, Apple’s recently announced Pencil is now available to order.

Apple might be late to the stylus game (perhaps because Steve Jobs once famously derided the very concept) but then it’s rarely bothered with being the first to anything before. Rather, Apple tends to arrive a little late with a supremely polished or original take on a technology.

Sure enough, as Apple Pencil makes its debut, there are already plenty of third party iPad styluses on the market – many of which have established a considerable fan-base.

As is usually the case, some of Apple’s biggest rivals have also beaten it to market with their own distinct takes on the stylus.

We thought we’d take a look at the Apple Pencil alongside some of the best and most popular styluses around, and see how they compare feature-for-feature.

Apple took its time providing an iPad stylus, but the Apple Pencil will automatically become the best support iPad stylus by its mere existence. You can guarantee that third party app support will be unmatched, with heavy hitters like Microsoft and Adobe already confirmed as being onboard.

Then, of course, there’s Apple’s own pre-installed apps like Mail and Notes, which will have Apple Pencil support baked into iOS 9. It’s a considerable advantage.

It also looks like the Apple Pencil will have unmatched sensitivity, with its ability to sense multiple layers of pressure (though Apple doesn’t specify precisely how many), as well as the angle and orientation of the pen. It promises to provide an almost textural experience – hence the Pencil name – and you can also use your finger to affect the screen at the same time.

Related: 6 features that will make you want an iPad Pro 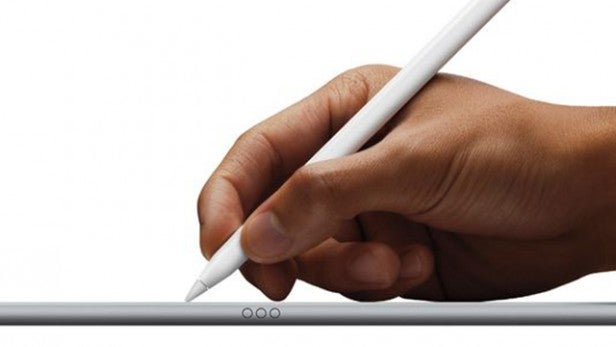 Pairing and charging should be a doddle thanks to a built-in Lightning jack (which gives you 30 minutes of juice in just 15 seconds), and it’s completely button-less set-up is typically Apple.

However, it’s far from a hopeless situation for those pre-existing third party styluses, and that’s partly because Apple appears to have made some unusual missteps in the Apple Pencil’s design.

Apple’s stylus is a curiously large, plasticky device that doesn’t quite tally with the company’s typically classy, compact design work. Early hands-on reports have complained of it being slippery and unpleasant to hold.

It also seems likely to suffer for being completely cylindrical, which will invariably lead to it rolling off desks and artfully distressed coffee tables the world over. Tied in with that is a lack of storage facilities, there’s no magnetisation or even a clip with which to help stash the Pencil away.

The potential hiccups don’t end there. The Apple Pencil isn’t compatible with any other iPads other than the iPad Pro, and it’s by far the priciest stylus here at $99, which will probably translate to somewhere around the £80 or £90 mark.

Wacom is one of the biggest names in stylus tech. It’s responsible for the likes of the Wacom Cintiq, a stand-alone stylus system used by many design professionals.

Wacom also channels that expertise into a small range of iPad styluses. The latest of these is the Intuos Creative Stylus 2.

As is Wacom’s stock in trade, the Intuous boast exemplary pressure sensitivity. It can detect a whopping 2048 degrees of pressure, reacting to the slightest variation in pressure. This is channelled through a fine 2.9mm writing tip, which is made from the same hard plastic material that goes into the Cintiq.

It also features built-in palm rejection, so you can rest your hand on the screen without messing things up. It’s a common feature among such high-end styluses, and the Apple Pencil appears to have it too. 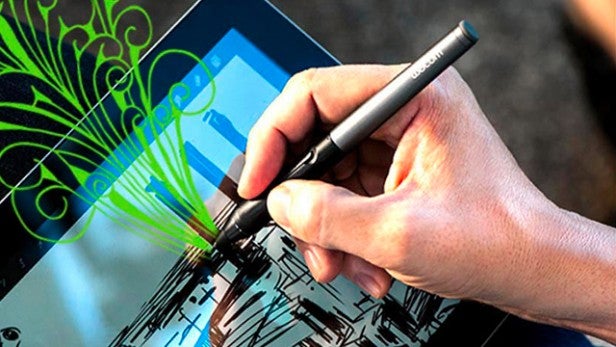 Unlike the Apple Pencil (and like most of its third party rivals), the Intuos Creative Stylus 2 has a hardware button.

App compatibility isn’t exactly universal (a persistent problem with third party iPad styluses), but it does include the likes of Autodesk SketchBook, Adobe Photoshop Sketch, Wacom’s own Bamboo Paper, and a selection of other third party tools (Wacom mentions 18 in total).

One issue is that the Wacom effort doesn’t work with the iPad Air 2. This appears to be an issue faced by pretty much all styluses that use magnetic field tips, but it’s still annoying that Apple’s latest and greatest 10-incher is a no-go.

Advantages: Dedicated OneNote buttons, Free with Surface
Disadvantages: Pressure sensitivity not what it used to be, standard batteries

Microsoft’s Windows hybrid remain peerless in its class, even a whole year on from its release. In fact, only its likely successor (tune in on October 6) is likely to surpass it for sheer all-round tablet-laptop mastery.

Indeed, it’s not difficult to see where Apple got the “inspiration” for the iPad Pro with Apple Pencil combo from. Microsoft can be forgiven a smug (if slightly worried) grin.

One of the key improvements to the latest model of the Surface Pro 3 has been an upgrade to its Surface Pen. Gone is the highly sensitive Wacom effort of previous models, and in its place comes a more general N-Trig effort.

It’s arguably more consistent in general usage than before, but the latest Surface with its Surface Pen has actually been scaled back in one way. The Surface Pro 3 N-Trig pen ‘only’ supports 256 levels of pressure sensitivity compared to the previous Wacom device’s 2048.

Related: Is the iPad Pro a MacBook or iPad Air rival? 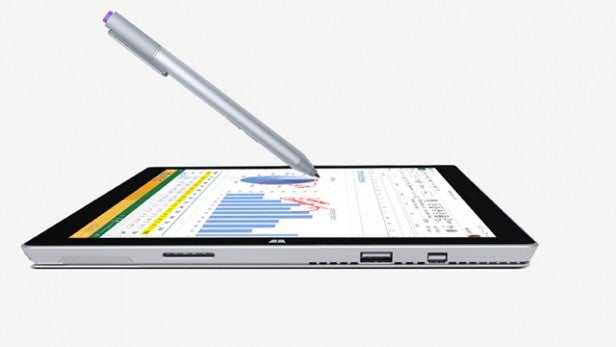 Of course, we’re comparing with Apple’s new solution here, and sadly we haven’t been given precise data on the Apple Pencil’s pressure sensitivity. It’s made some typically Apple-ish statements about precision and sensitivity, but nothing concrete.

Where the Apple Pencil does appear to trump the latest Surface Pen is in its tilt detection, which allows for the application of some subtle effects in drawing applications.

Of course, the Surface Pen appears to have a few advantages and extra features of its own.

The Surface Pen’s integration with the Surface Pro 3 is arguably its biggest plus. It comes with each and every Surface Pro 3 as part of the package, which inevitably means that it’s more deeply integrated with it than the Apple Pencil is with the iPad Pro.

As an example of that, the Surface Pen comes with a dedicated button for instant access to OneNote, Microsoft’s note-taking app, on the Surface Pro 3. With it, you can do things like jump straight to a new note from sleep.

Ultimately, Apple’s stylus may end up being the more sensitive, precise tool, but it will almost certainly lack the deep integration and all-round usefulness of the Surface Pro 3 with its bundled-in Surface Pen.

It’s not a tablet, but the Samsung Galaxy Note 5 deserves a mention in this feature because Samsung’s Note range with its S Pen stylus is one of the most popular stylus-driven platforms around. We shouldn’t rule out that some form of S Pen technology crops up on the Galaxy View tablet that was teased by the Korean company earlier this month. For now, the Note 5’s S Pen is the latest iteration of this technology.

Samsung’s stylus is far more compact than any of the above rivals. It has to be, as it physically slots into the Note 5’s body – by far the neatest solution here. Having said that, there’s an issue here that means you can easily get the S Pen stuck and break the Note 5 by reinserting it the wrong way up.

Housing design issues aside, the S Pen’s compact size also means that it’s not as wieldy as the Apple Pencil and co. It’s intended for quickly scrawled notes rather than for composing your latest artistic masterpiece.

Related: What can 3D Touch do on the iPhone 6S and 6S Plus? 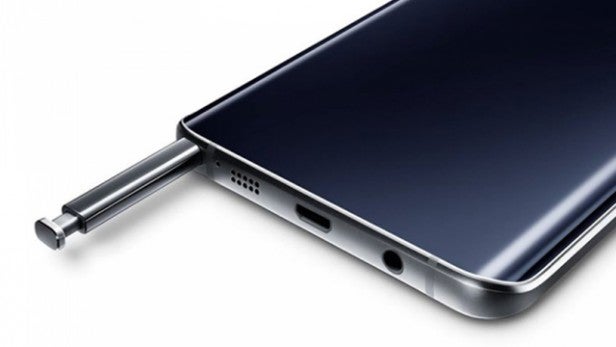 Still, like the Surface Pen, the S Pen appears to trump the Apple Pencil on simple utility. It’s deeply integrated into the host device on more than just a physical level.

Samsung has fitted the S Pen out with a single button that brings up a radial menu wherever you are on the Note 5’s Android-based interface. This allows you to launch quick stylus-based tasks like memos and smart screen selections.

While it’s only a tiddler compared to the Apple Pencil, the S Pen is not without finesse. It sports what Samsung rather vaguely calls “true-to-life pressure sensitivity,” which basically means that when you press heavily you’ll get a thicker line just as you would with a fine pen or pencil. We doubt it’s as advanced as

Apple’s solution, but then it really doesn’t need to be.

This is a functional stylus meant for day to day usage across a number of productivity tasks – quite the opposite of the Apple Pencil, in other words.

It’s impossible to say if these rival stylus-driven platforms are superior to the Apple Pencil or not, but one thing is already abundantly clear. They benefit from being tightly integrated and indeed bundled with their host device.

Apple’s decision to make the Apple Pencil a stand-alone tool might be good for opening up your options, and for allowing the creation of a truly specialist tool with no cap on price or dimensions. But it will inevitably create a less cohesive pairing between it and the iPad Pro.

It will likely trump existing Bluetooth styluses
through widespread app compatibility, and will top the more dependable
capacitive styluses through its sensitivity and sophisticated range of
inputs.

Will the Apple Pencil be something that will enhance your general iOS 9 navigation outside of a few specialist drawing apps? It’s highly unlikely, and that means it will be useful to far fewer people. But that’s not to say it won’t give its rivals something to think about.