iPhone 8 vs iPhone 7: Should you upgrade to Apple’s latest?

If you were expecting Apple to replace the iPhone 7 with the iPhone 7S, then think again. At a special event in Cupertino, Apple  unveiled the iPhone 8 and iPhone 8 Plus, the successors to the iPhone 7 and 7 Plus.

Should you be looking to upgrade? Let’s take a look at what Apple has changed.

Apple played it safe with the iPhone 7 last year, deciding to keep the overall form-factor and size the same as both the iPhone 6S and 6. And again this time around there isn’t a whole lot different – all the big changes seem to have gone into the iPhone X. Instead, the iPhone 8 looks very familiar. It has rounded sides and a Touch ID button below the display.

Related: iOS 11 problems and how to fix them

The biggest visible difference is the glass back, which replaces the 7000-series aluminium used in the iPhone 7. Apple has switched to glass so it can implement wireless charging into these new phones.

Apple introduced an IP67 water-resistance rating with the iPhone 7, and it’s good to see that that’s still here, but the iPhone and iPhone 8 Plus still both lack a headphone jack. To combat this Apple includes both a Lightning-to-3.5mm dongle and a pair of Lightning EarPods in the box.

Related: How to factory reset an iPhone

iPhone 7 vs iPhone 8 Specs: Which phone is more powerful?

Apple’s iPhone 7 and 7 Plus were, predictably, the fastest iPhones ever, thanks to the A10 Fusion quad-core CPU, 2/3GB RAM and a six-core GPU. They were, and still are, some of the fastest and smoothest phones out there, easily running any app or game in the App Store.

Inside the iPhone 8, there’s an A11 Bionic chip, which is built using the same 10nm manufacturing process as the Qualcomm Snapdragon 835, for improved operational efficiency, and 2GB RAM (3GB in the 8 Plus). Apple says the Bionic is 25% faster than the A10, and it has the first Apple-designed GPU that’s built especially for Metal 2.

In our tests and after using both phones, the iPhone 8 is faster. It almost doubles the scores in benchmarking apps like Geekbench 4 and feels super fluid in everything that you do. But, the iPhone 7 is still very fast and there aren’t many apps available that really take advantage of this extra power. Even the intensive AR apps we tried out worked well on both phones, which is great if you don’t want to upgrade but annoying if you do.

In terms of display, the iPhone 8 is very similar to the iPhone 7. Both are available with 4.7-inch and 5.5-inch IPS LCD panels with a Retina resolution. If you’re after something a little different, the iPhone X has a near-bezel-free OLED display.

What the iPhone 8 does add is True Tone. This alters the temperature of the display depending on your environment and makes it much easier to view in the dark. The iPhone 8 can also play back HDR/Dolby Vision content from Netflix and iTunes, for added contrast and brightness. 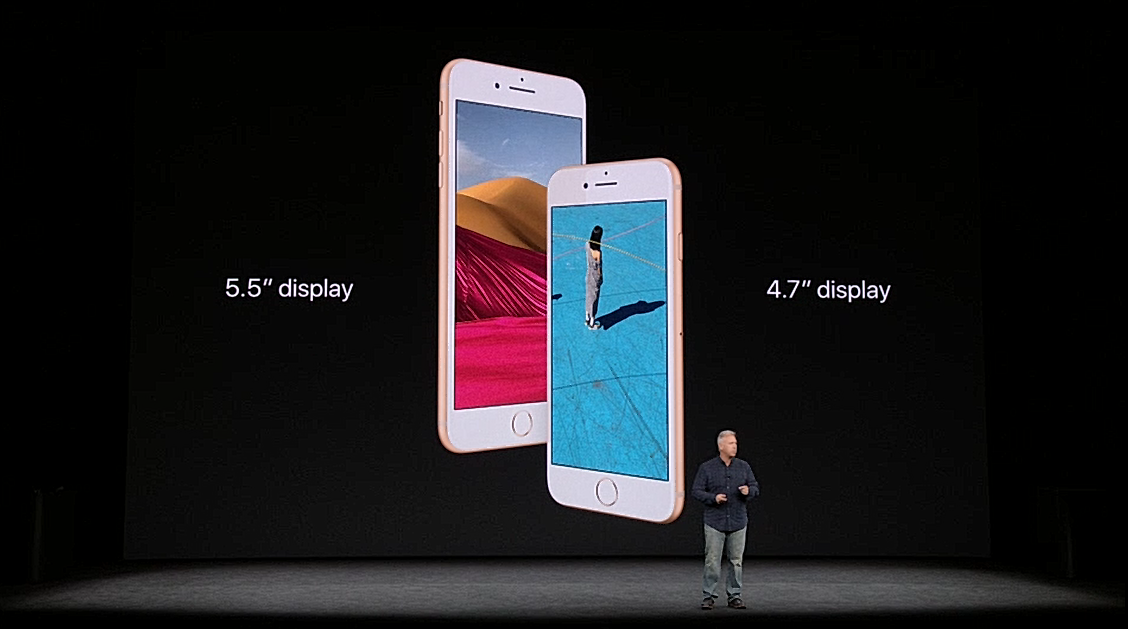 The iPhone 7’s 12-megapixel f/1.8 camera was good, but it was quickly surpassed by the Google Pixel and then the Galaxy S8 and HTC U11.

For the iPhone 8, Apple has made a bevy of small changes across the board. It’s still 12MP f/1.8 on the regular iPhone 8, and there’s a dual-sensor 12MP camera on the Plus, but it now has better pixel processing, faster autofocus and hardware noise reduction.

Pictures from the iPhone 8 are great, with better saturation and much richer colours. They’re not quite as good as the Pixel 2, but this is one area you will notice if you decide to upgrade.

The iPhone 8 Plus has a new Portrait Lighting mode that’ll launch in beta, and this adds a so-called ‘professional lighting’ look to your pictures.

When we reviewed the iPhone 7 our biggest criticism was the poor battery life. We struggled to make it past the end of the working day without reaching for the Lightning cable. The 7 Plus didn’t have the same problems, thankfully.

The battery on the iPhone 8 is actually smaller than the 7, but optimisations for the new CPU does make it last longer. We’ve managed to get about day without reaching for the charger.

Design: All the phones are IP67 rated and lack a headphone jack, but the iPhone 8 has a glass back for wireless charging. Both come in 4.7-inch and 5.5-inch sizes.

The iPhone 8 isn’t a huge upgrade and we don’t think there’s much here to entice those who picked up an iPhone 7. The camera is better, as is the screen, but they’re all quite small updates.