iPhone 11 vs OnePlus 7 – Has Apple trumped one of the year’s best mid-range smartphones?

Apple’s new phone for the people, the iPhone 11, is available to pre-order. But how is it shaping up to the challenge of that other upper-mid-range champ, the OnePlus 7?

The OnePlus 7 is one of our favourite smartphones of 2019 so far, offering a classy all-round package and great value for money. Which is exactly the vibe we’re getting from the iPhone 11 prior to its September 20 release.

Read on for a deeper look at the phones or see the points below for a quick overview.

iPhone 11 vs OnePlus 7 – Specs and camera

We can state with confidence that the iPhone 11 will be faster than the OnePlus 7, even though we’ve only properly tested the latter.

We know this because the iPhone XR, running on the older A12 Bionic, already benchmarks faster than the OnePlus 7 in most conditions – a fact Apple was only too eager to point out during the iPhone 11’s reveal. With the iPhone 11’s A13 Bionic set to receive a healthy 20% performance bump and six times faster machine learning, that gap is only going to widen.

The OnePlus 7 does run on at least 50% more RAM than the OnePlus 11 (6GB vs 4GB), but of course Android is way more memory-hungry than iOS. This difference is unlikely to bear out in day to day usage, but then, neither is the iPhone 11’s processor advantage. The OnePlus 7 is one of the slickest-feeling Android phones on the market.

If the iPhone 11 looks set to dominate the internal specs round, the OnePlus 7 is on course to win the display round. Its 6.41-inch 1080 x 2340 AMOLED display will be bigger, sharper, and more vibrant than the 6.1-inch 828 x 1792 LCD of the iPhone 11 – a component that looks pretty much unchanged from the iPhone XR.

It’s tricky to call an early winner in the camera stakes, but if we were betting types we’d put our money on the iPhone 11. While both phones pack dual-camera set-ups, the iPhone 11’s sounds more flexible.

Apple’s phone goes with a pair of 12-megapixel sensors, with the secondary unit being an ultra-wide capable of a 120-degree field of view. As Apple puts it, you’ll be able to take 2x zoom-out shots.

The OnePlus 7’s main sensor is a 48-megapixel unit, but it uses a pixel binning technique to combine four pixels-worth of information into one to produce 12-megapixel shots. This is backed by a 5-megapixel sensor, which is used exclusively for gathering depth information. So no zoomed out (or in) shots here.

Hardware aside, the track record of Apple’s and OnePlus’s (arguably more important) photographic software smarts leads us to expect more of the iPhone 11 than the OnePlus 7 – the latter of which yielded decent but unspectacular results in our review.

It remains to be seen how Apple’s new Night Mode stacks up to OnePlus’s Nightscape for low-light shots. 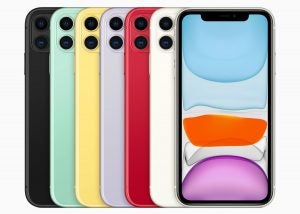 The iPhone 11 is clearly an iteration on the iPhone XR, with an identical weight and measurements and the same 6.1-inch notched display. It’s apparently made of tougher glass and metal, but that seems to be the case every year – and you still won’t want to drop it.

It’s a similar story with the OnePlus 7, which looks nigh-on identical to the OnePlus 6T. The dimensions are virtually the same, and they share the same teardrop notched display and slippery pebble back.

Check out loads of our other iPhone 11 content below:

In terms of preference, we’d go with the OnePlus 7’s more subtle notch over the iPhone 11’s huge bar every time, and it’s also a fair bit lighter. That said, the iPhone 11’s striking array of colours and new camera array at least make it stand out more from the rear.

On the durability front, the iPhone 11 is IP68 certified, so it enjoys a high degree of water and dust resistance. The OnePlus 7, but contrast, has no official IP rating.

Apple will be selling the iPhone 11 from £729/$699 when it hits shops on September 20. Yes, UK customers appear to be taking a hit again, courtesy of the tanking pound.

That’s still cheaper than the $749/£749 launch price of the iPhone XR, but it’s significantly pricier than the OnePlus 7. Prices for the OnePlus 7 start from £499 (it’s not being sold in the US).

That’s a whopping £220 price difference between these two phones. It’s worth pointing out that you get double the storage with this starter model too (128GB versus the iPhone 11’s 64GB).