This is a steady, slightly predictable update to the OnePlus 6T that is clearly trying to entice those who haven’t updated in a few years. If you’re coming from a OnePlus 3T or even a 5 or 5T, then the difference should feel significant. This is a great value phone that’s a strong competitor to the excellent Xiaomi Mi 9.

The OnePlus 7 Pro might be the company’s headline-grabbing handset this year but it wasn’t alone at launch. The standard OnePlus 7 is also here, looking to entice those with tighter purse strings to the latest generation of the company’s phones.

The OnePlus 7 bridges the gap between last year’s OnePlus 6T and this year’s 7 Pro, utilising different bits from the two devices to create a handset that takes on the likes of this year’s Xiaomi Mi 9 and Asus ZenFone 6.

While the 7 still aims to offer a flagship experience at a fiercely competitive price, unlike previous OnePlus phones, it doesn’t try quite as hard as the ‘Pro’ model. On the one hand, this means it lacks features that help it stand out quite as much, on the other, it starts at £150 less than the beefier OnePlus 7 Pro.

The OnePlus 7’s camera is still a big upgrade

That main camera on the back of the 7 is fronted by a 48-megapixel Sony IMX586 sensor. It’s become a wildly popular component on many current mid-to-high-end phones, meaning its capabilities hinge on OnePlus’ ability to deliver competent software to complement the hardware at play.

Despite the megapixel count, the OnePlus 7 takes 12-megapixel stills by default through a process called ‘pixel binning’. Basically, it treats four standard pixels as one large pixel, allowing more light in for use in the resultant 12-megapixel shots that it captures.

Of course, a keen eye will spot that the back of the 7 lacks at least one member of the 7 Pro’s camera setup, but it takes things further, with only a 5-megapixel depth sensor accompanying that main 48-meg snapper – in place of the Pro’s ultra-wide and telephoto sensors. 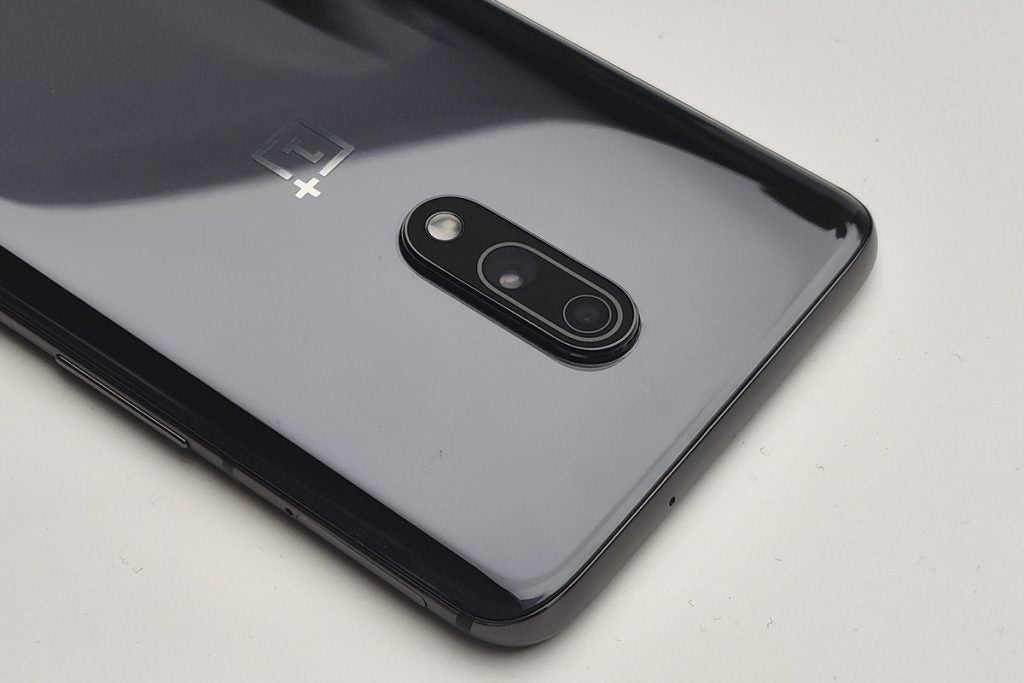 Overall, picture quality holds promise, and provided you’re OK with the lack of versatility compared to the Pro model, it makes for a decent all-round cameraphone. Its a definite improvement over the 6 and 6T, which themselves already demonstrated more competent image handling from OnePlus’ photography team. 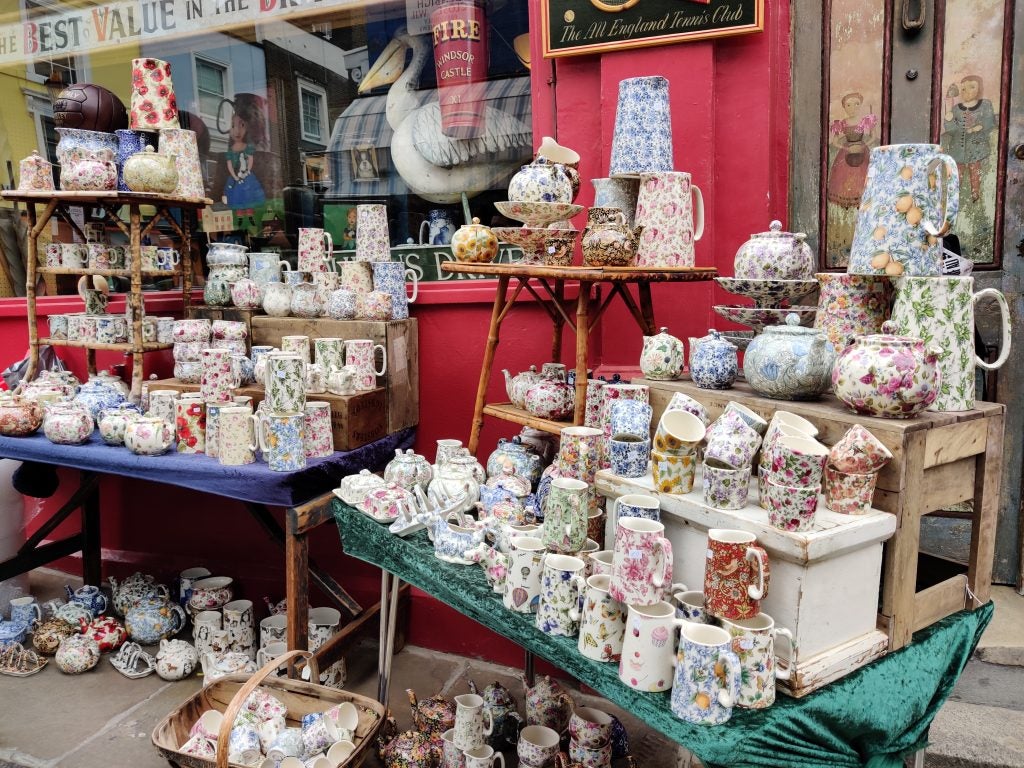 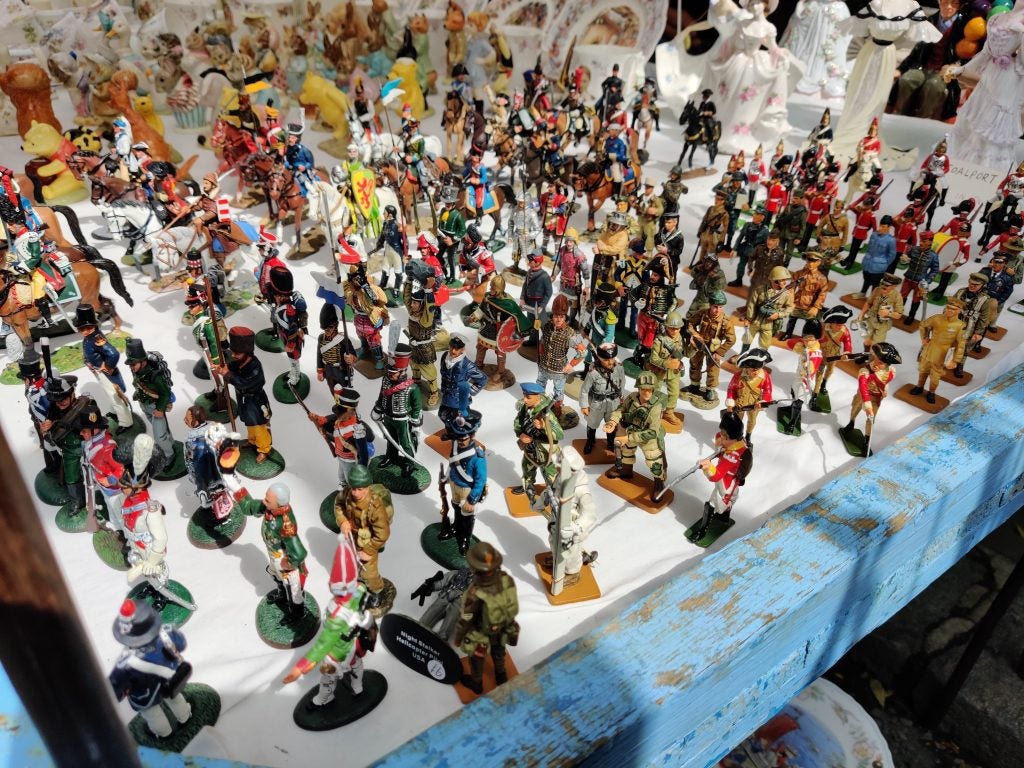 As for low light shooting, the OnePlus 7’s capture capabilities have unquestionably been improved (presumably via software tweaks) since the OnePlus 7 Pro’s initial launch, where the 48-megapixel camera left a lot to be desired. There’s still noise and grain in the darkest of areas but it’s far less invasive, while fine detail retention is surprisingly good.

Things, for the most part, get even better when you activate the phone’s Nightscape mode. It’s not going to give Google’s Night Sight cause for concern but in its own right, it’s a great boon when taking snaps under tricky lighting conditions. 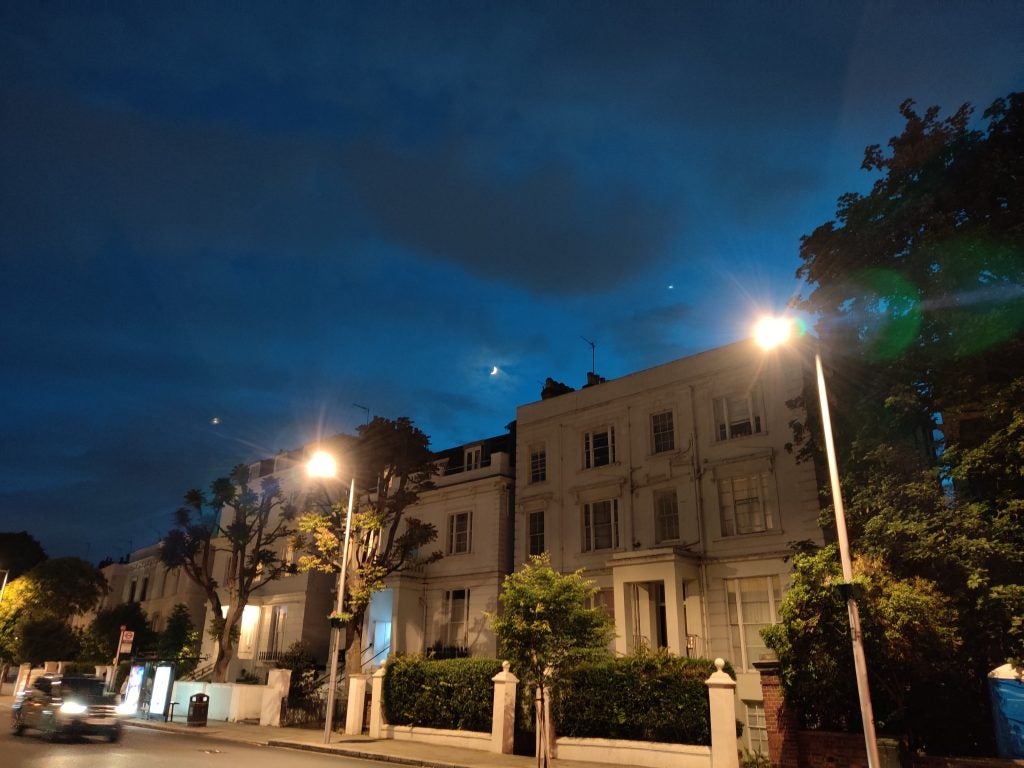 Nightscape 2.0: Off (left), on (right) – drag the white slide bar to compare the two images

You can expect noticeably better colour capture and dynamic range, plus most of the aforementioned noise gets ironed out in the process too. However, this all comes at the expense of fine detail, with heavy-handed smoothing rounding out the edges of intricate aspects of a scene. 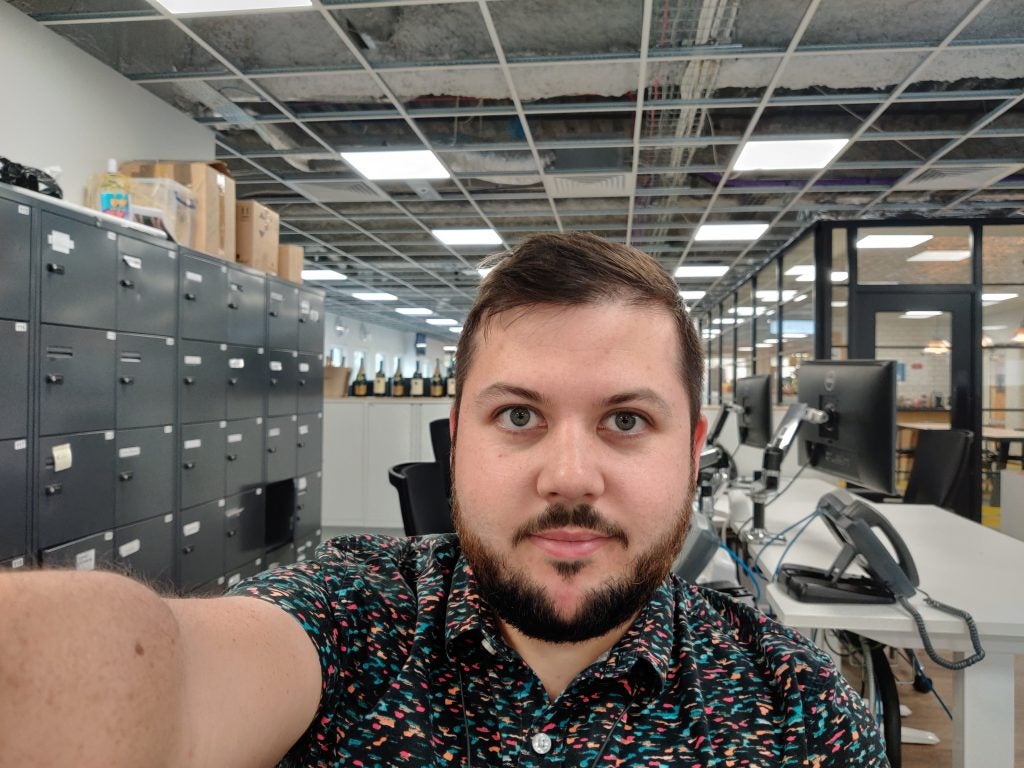 Portrait mode is also suitably solid. There’s definite smoothing when flipping the mode on, even without virtual beauty mode activated, while dynamic range appears a touch wider, with more colour variation and higher saturation, especially across the face.

The depth effect – or bokeh – looks pleasingly natural, I just wish I had to option to adjust how strong the effect was, either at the point of capture or after the fact, a common ability among many competitors.

The OnePlus 7 packs the latest processor, lots of memory and a big battery

Despite its slightly lesser standing compared to its bigger brother, make no mistake, the OnePlus 7 is equipped just as well as any other top-tier flagship.

Numbered OnePlus phones have always been powered by the latest silicon from Qualcomm, and while the continuation of this trend was never in doubt for the top-end Pro, there was a chance that we could have seen the cheaper 7 ship with a mid-range CPU instead. Thankfully, that’s not the case here.

The OnePlus 7 packs the same Snapdragon 855 processor, paired to either 6GB or 8GB of RAM. The result is a phone that in my testing, came out near the very top of our current benchmarking tests, vying for the lead against the likes of the Black Shark 2, iPhone XS and, unsurprisingly, the OnePlus 7 Pro.

As you’d expect from a phone running this chipset, it’s very fast. OnePlus has always ensured that its phones have felt as snappy as possible, and that’s most certainly the case here.

Storage starts at a generous 128GB too, but you can splurge for the beefier 256GB if you prefer. As is usual with OnePlus phones, there’s no expandable storage but with so much internal space for the price, most users won’t have to worry about it becoming a limitation. 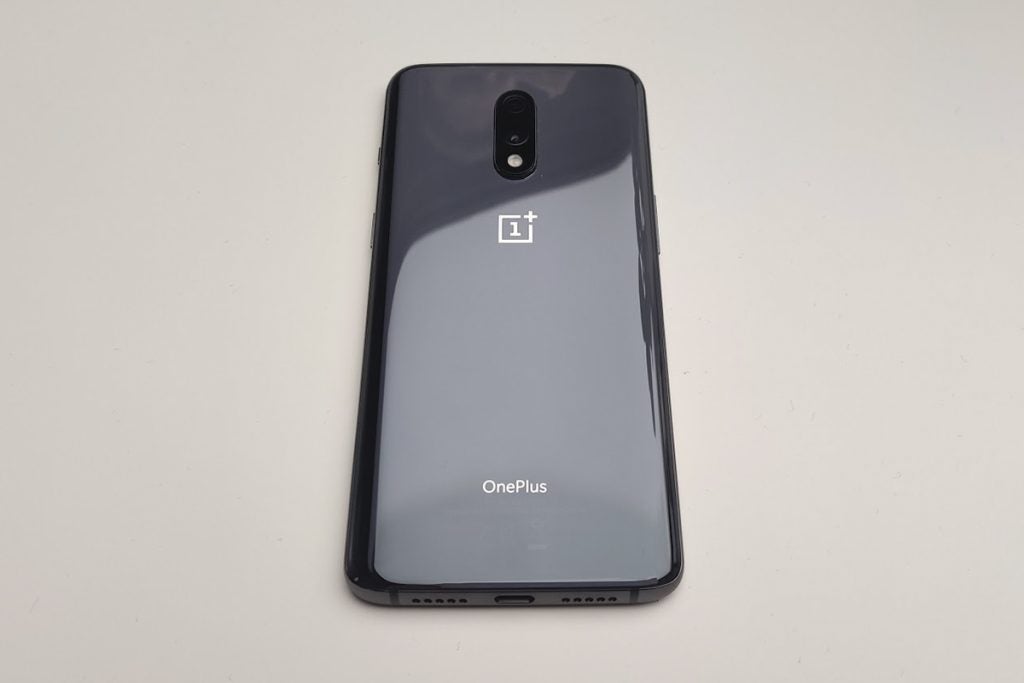 A lot of this performance comes from Oxygen OS, which remains my personal favourite reskin of Android. This is in part thanks to how faithfully it shadows Google’s own take on the Android user experience, augmented by a few smart additions that elevate things in terms of convenience and flexibility.

Some of the latest features are also some of the most memorable, with built-in screen recording now natively onboard, Zen Mode for completely blocking out notifications for 20-minute stints and the new Fnatic mode, which frees up the phone’s resources to ensure your gaming experience is as smooth as can be.

There’s also a 3700mAh battery inside that uses the same Fast Charge technology that we’ve seen for a few generations of OnePlus now.

The phone’s big battery was able to get me through two days of regular use and, while my initial test was an anomaly, the 20W fast charger was able to refill the OnePlus 7 in under 90 minutes, with almost half of the battery (47%) full after just 30 minutes.

The OnePlus 7 shares its design and screen with the 6T, and that’s no bad thing

If OnePlus has taken the internals and camera from the 7 Pro, then it’s taken the design and display from the OnePlus 6T.

Visually, the OnePlus 7 looks near-identical to the OnePlus 6T. The front keeps the dewdrop notch, the back feels like a slippery pebble and there’s no headphone jack. There’s also no wireless charging or official IP rating for water resistance. Considering the £499 price though, I’m not complaining too much. 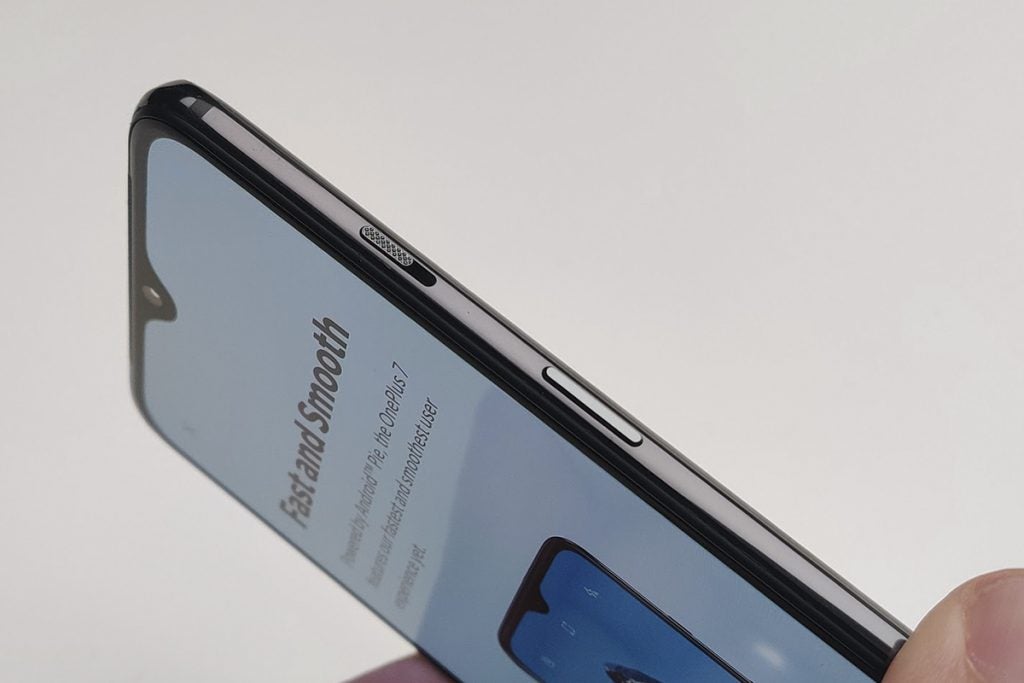 If you inspect the 6T and the 7 side by side (as I did), you’ll notice that the company’s signature alert switcher, which serves as a physical toggle between ‘ring’, ‘vibrate’ and ‘silent’ profiles, is notably smaller on the newer 7. The earpiece grille, meanwhile, concealed into the top edge of the phone above the dewdrop notch of that 16-megapixel front camera, is much wider.

The new alert switcher is perfectly pleasing to use and may potentially offer better grip as a result of its lesser height, while the earpiece led me to believe that it’d be easier to hear recipients on the other end of a phone call.

In truth, it takes a little searching to find the earpiece’s sweet spot, so the extended design must only serve to differentiate between the old and new phones, albeit solely on a cosmetic level. 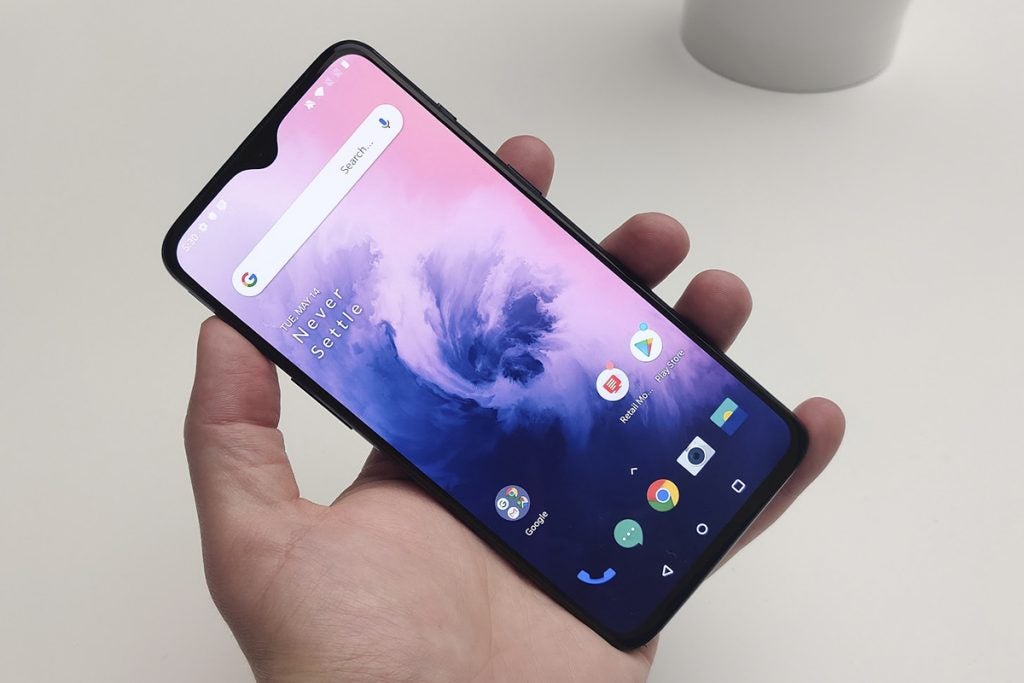 The 6.4-inch FHD+ might not match up to the glorious Quad HD+, 90Hz Fluid AMOLED panel you’ll find on the OnePlus 7 Pro, but it’s still a great display. Colours are punchy, there’s a decent array of screen modes (P3, sRGB etc.) and as it’s OLED you get perfect, deep blacks.

The in-display fingerprint has also been tightened up, which is a good thing considering how sluggish it felt before.

Should I buy the OnePlus 7?

This is a steady, slightly predictable update to the OnePlus 6T that is clearly trying to entice those who haven’t updated in a few years. If you’re coming from a OnePlus 3T or even a 5 or 5T, then the difference should feel significant.

If you’re going to be upgrading from the OnePlus 6 or OnePlus 6T the updates are less immediately obvious. The camera will be better and the performance should be too, whether the improvements will warrant an upgrade remains to be seen though.

That aside, however you look at it, this is a great value phone that’s a strong competitor to the excellent Xiaomi Mi 9.