Amazon Fire TV Tips, Tricks and Hidden Features: 12 secrets you might not know about the Fire TV and Fire TV Stick, including all the best hacks you need to make the most of your new streaming gadget.

Amazon’s Fire TV has quickly become one of the best ways to turn a dumb TV smart. The cheap Fire TV Stick, which recently got a 2017 update, makes any HDMI-enabled television much more capable than even £2,000-plus sets in terms of services and apps, while the Fire TV box can take the place of a games console and is now capable of 4K streaming.

There’s more to these ultra-accessible gadgets than you’ll appreciate when you first take off the cellophane and jam in the remote’s AAA batteries, though.

Here are 12 tips, tricks, hacks and secret features you might not know about the Fire TV family.

First of all, let’s explain the key differences between the Fire TV box and its more affordable sibling, the Fire TV Stick.

While the Fire TV box may be twice the price, it’s a lot more powerful and has access to more games as a result.

You’ll see some slow-down in 3D games at times with the Stick, for example, as it uses a remedial dual-core CPU. It’s fine if you want a cheap media machine, but it is no console-replacer.

The Fire TV Box is a lot more powerful, with a 64-bit MediaTek 8173C CPU that has two Cortex-A72 cores and two Cortex-A53 cores – equivalent to the power of a very good mid-range phone. It also has more connections, with an Ethernet port, optical audio output and a USB. Finally, it can output in 4K where the Stick’s max resolution is 1080p.

The “all-new” 2017 Fire Stick has a much more powerful processor and is absolutely fine for streaming TV shows and films.

However, if you’ve not yet bought a Fire TV device and want to play games, you’re better off with the box version. It supports many more games because it has that extra power on tap – the likes of Minecraft: Pocket Edition, Asphalt 8 and many others simply don’t work on the dual-core Fire TV stick, even if you sideload them.

More on that later, but now it’s time to look at how you can make the most of your Fire TV.

1) Find shows in Netflix and iPlayer with voice control

When the Amazon Fire TV with mic first launched, it would only look up Amazon goodies: movies from Amazon and apps from the Amazon Appstore.

This was annoyingly limited, but now it’s actually quite useful as it’ll look up videos in Netflix and iPlayer, too, and we’d expect Spotify support to be incoming soon.

Related: A guide to BBC iPlayer in 4K 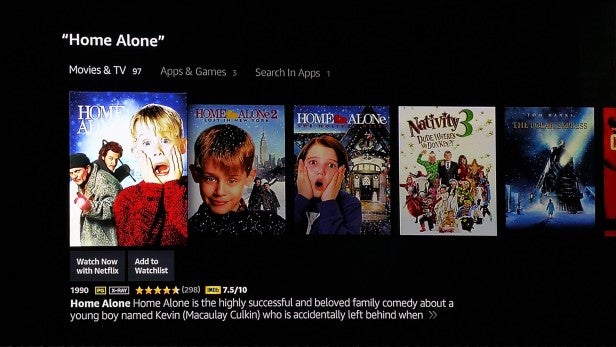 2) Make gaming better with a gamepad

Some titles don’t work all that well when gaming with the Fire TV’s remote. It’s just too simplistic for console-style games, but you can get a Fire TV gamepad that makes these titles much more fun.

Here are some of the games that really benefit from a gamepad – some of them won’t work without one, in fact. 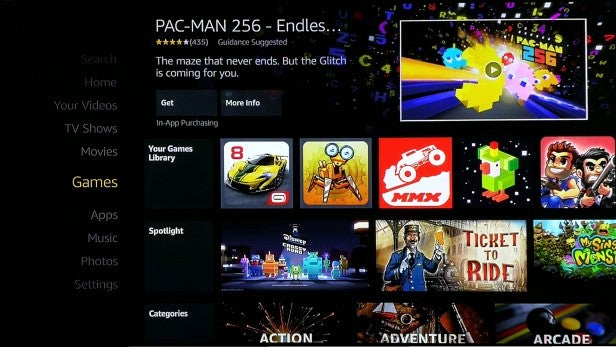 As we’ve explained, Amazon’s Fire TV games controller is a lot like the pads you get with an Xbox One or PS4. However, it has one extra special feature.

As well as mirroring the controls seen on the Fire TV remote, including playback buttons, there’s a mic that lets you talk to the media box directly.

Get a gamepad and you can pretty much relegate the remote to a drawer, if you like.

4) …Or buy a voice remote separately

If you bought one of the cheaper Fire TV Sticks and regret it, it’s worth knowing that you can buy a voice remote separately.

As well as having an inbuilt mic, the higher-end remote is longer and more ergonomic. It just feels better-made in general, as where the entry-level remote is made of cheap-feeling plastic, the voice remote has a nice soft-touch finish and higher-grade buttons.

You don’t have to buy the official £40 (RRP) Fire TV games controller to get a complete gaming experience with the Fire TV, as loads of third-party pads are supported.

Many wired remotes work with the full-fat Fire TV just by plugging them into the box’s USB port. The most interesting of the lot are console controllers, as many of you may already have one of these lying around. The PS4’s DualShock 4 works, as do wired and wireless (with the USB adapter accessory) Xbox 360 pads.

Xbox One pads don’t work without hacking the Fire TV. We wouldn’t recommend this as you’ll void your warranty at best, and brick your Fire TV at worst, but if you’re intent on rooting your device, you can find instructions over on the XDA Developers Forum.

The simpler option? Check out a decent quality, cheaper alternative like the Nyko PlayPad Pro. 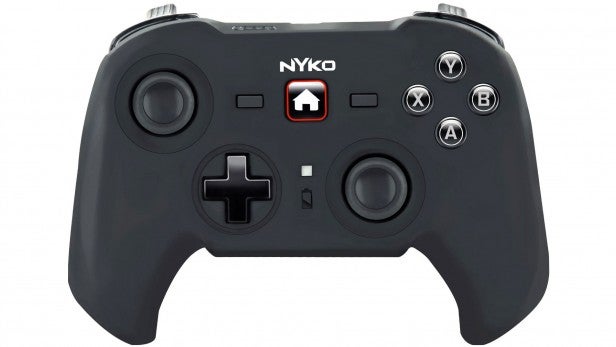 Fresh out of the box, the Fire TV’s app library can seem limited, particularly if you have the TV Stick rather than the larger Fire TV. However, you can sideload apps, which means to install them manually. It’s easy too.

Go to Settings > System > Developer Options and enable ADB Debugging and Apps from Unknown Sources. Next, download Apps2fire on your phone.

This lets you install APK files (Android application packages, or Android apps to you and I) directly on your Fire TV from your phone.

Large apps take quite a while to load, so it’s best to set your phone’s screen to dim only after about 10 minutes to avoid the app closing.

Related: How to install Kodi on a Fire TV Stick

Amazon’s smart voice assistant has now landed on UK Fire TV devices, meaning you can now do loads of stuff without lifting a finger, like asking for the weather, getting read out information from Wikipedia, and hearing sports results.

We’re hoping that in time we’ll be able to control our smart home gear too – things likes Philips Hue lights – right from the Fire TV remote or games controller.

However, when Amazon really wants you to buy an Echo or Echo Dot as well as a Fire TV, so we’ll have to see whether that pans out.

8) Use your phone as a Fire TV remote

One of the neat side features of the Fire TV is an official phone app that lets you use your iPhone or Android as a replacement for the remote. It’s particularly useful if the Fire TV remote keeps ending up under the sofa, in the kitchen, or inexplicably down the loo.

The app is free and also lets you talk to your Fire TV or Fire TV stick using your phone’s microphone.

Get it for iOS here or Android here.

9) Send music to your Bluetooth headphones

The Fire TV is fantastic for solo late-night movies if you own a pair of Bluetooth headphones. You can connect a set in the Bluetooth part of Settings, with the two hooking up just like a phone and wireless headphones would.

It’s a fantastic feature given how popular wireless headphones are, yet very few home entertainment devices offer standard Bluetooth streaming – the PS4 and Xbox One don’t, almost all TVs don’t, and only the very latest home cinema receivers do.

It’s all a bit silly, really, so enjoy the fact your new Fire TV does! 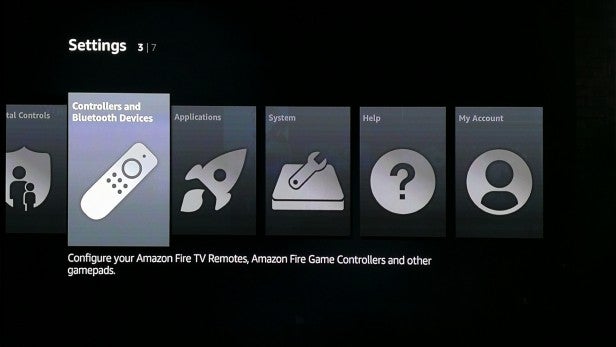 10) Mirror your phone’s screen on the Fire TV

A Fire TV can take whatever’s on your phone’s screen and pass it over to your TV using mirroring. This isn’t an Amazon tech, it’s Miracast, so you can use it with most phones.

Just long-press the home button on your Fire TV remote to get to the quick-access menu, where you’ll see a mirroring option.

Now, you just have to find the corresponding mirror option on your phone. It’ll be in the Settings menu, and may be called Miracast, Mirrorshare or screen mirroring, depending on your model.

In our experience, it’s far from perfect, with lag and lots of image break-up, so you wouldn’t want to watch a movie or play a game like this.

However, if your home internet is fast at both uploads and downloads you may have better luck, and things like showing off your latest holiday snaps should work just fine. 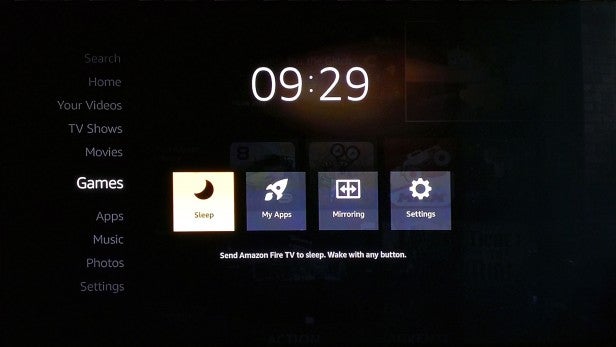 Fire TVs only have 8GB storage – aka not much. However, there are a couple of ways to add to this.

For one, you can insert a microSD card, which will merg with the device’s internal storage, letting you install apps as if it is part of the system’s core databank.

You can also plug USB sticks or drives into the Fire TV box. These can then be used as storage for videos and other media, but they can’t be merged with the internal storage in the same way, so microSD cards are probably your best bet, depending on your needs.

If you’re worried about your privacy, using Amazon’s hardware isn’t a great idea – it loves knowing more about you so it knows what it can sell you next.

The Fire TV automatically records everything you say though the mic, allegedly so it can use the info to make your voice searches better. Whatever the real intent, it’s still damn creepy, but it’s easy enough to negate.

You can wipe your Amazon voice recording history by going the company’s website, and then heading to your “Account” page.

From there, go to “Manage Your Content and Devices”, then find your Fire TV under the “Devices” tab. In this page, you’ll see a link called “Manage Voice Recordings”.

Click this and you’ll see the option to delete all those sneaky recordings.

Which you consented to, of course, because you didn’t read Amazon’s T&Cs, did you?

What are your favourite Fire TV tips and tricks? Let us know in the comments below.