The Samsung KS7000 is the entry-level range among the company’s elite SUHD models. This 49-incher is the smallest one, but it also comes in sizes of 55, 60 and 65 inches.

At a little over £1000, the UE49KS7000 is just about within the realms of sensible TV money. You’re getting one of the most affordable UHD Premium-certified TVs, which means its 4K and HDR credentials meet the industry standard for televisual superiority.

It doesn’t have the advanced specs of the flagship UE65KS9500, but it doesn’t have the crazy price tag either. This model has some of the top tech for less. If you’re after a good TV to ride the incoming wave of 4K and HDR goodness, this will do very nicely indeed.

Samsung has been responsible for some crazy designs over the years, but the UE49KS7000 is a simple, minimalist effort. The frame is thin enough to be barely noticeable from the sofa, save for a thicker strip at the bottom to which the feet attach.

The feet are wonderfully easy to fit: just slot them in and they click into place, without the need for screws. After years of fetching the screwdriver to set up a new TV, I’m very happy about this development.

A pity, then, that Samsung follows the ridiculous trend of having the feet far apart, positioned at the corners of the screen. This looks cool and no doubt contributes to stability, but it does mean you’ll need a surface as wide as the TV (109cm).

The minimalist vibe extends to the back of the TV, which is virtually seamless. There are no screw holes, and only two sockets: power and One Connect. For those unfamiliar with the way Samsung approaches its higher-end TVs, One Connect is a separate box that houses all the connections. The idea is to save space in the TV, allowing it to be slimmer, and also to give you easier access to the socketry. No more fumbling at the back of the AV stand and inevitably swearing. 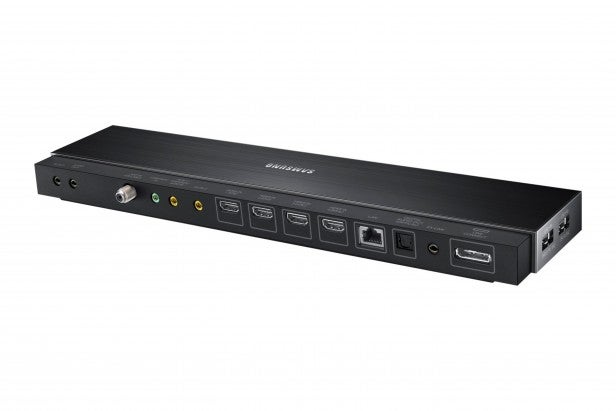 The One Connect box has a nice range of connections: four HDMIs (all HDCP 2.2 and therefore 4K-compatible), three USB ports, digital optical out, Ethernet, plus aerial and satellite sockets.

When it comes to remote controls, Samsung follows the trend of shipping two wands – a traditional one and a “smart” one with fewer buttons. The standard one is the same old design, with plenty of buttons and a sensible layout. I usually have a thing against smart remotes – the lack of number keys is just annoying – but Samsung has made a good effort with clicky, responsive keys instead of the irritating touchpad that some manufacturers insist on using. 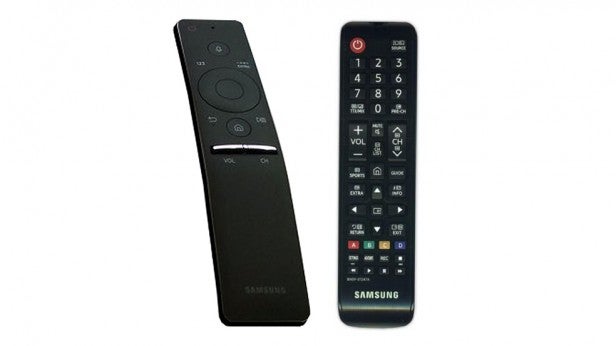 There are no 3D glasses in the box, because this TV doesn’t do 3D. Samsung has officially withdrawn support for the format. I’ve always felt 3D was pointless, so I won’t lose sleep over this development, but this does ignore the few who have a 3D Blu-ray collection.

On the software front, Samsung has given a practical facelift to last year’s Tizen-based operating system, which looked (and still looks) suspiciously like LG’s WebOS design. You get a pop-up bar of apps and shortcuts, only this latest version is a lot more practical and responsive than before. The TV automatically labels its inputs to reflect what’s plugged in, which is a nice touch.

What I really like is the app support, which includes all of the UK’s big catch-up apps, plus Netflix and Amazon Video. That’s pretty much all anybody ever needs. Sadly there’s no sign of YouView or Freeview Play, so you’d need a dedicated box if you want a fancy time-travelling TV guide. I’m quite content with standard Freeview HD. 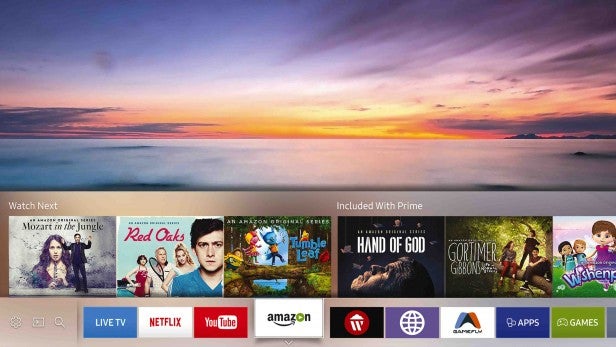 The KS7000 is set on Standard mode by default. Out of the box, this setting has a little too much blue. For better accuracy, it’s best to switch to Movie mode. The backlight should be turned down for standard dynamic range content. No more than 10 in a bright room (I had it down to about 4 in a dark room) if you want to avoid washing out those blacks.

Keep the processing modes to a minimum. I turned off Digital Clean View and Dynamic Contrast. Smart LED can be kept on, but I’d keep it on the Low setting.

The same for the Auto Motion Plus processing, which is way too strong by default and brings adds a ‘soap opera effect’ to your movies. Set this to ‘Custom’ and keep it on very low if you don’t want Batman to look like an extra on Eastenders.

New to the party is HDR+ mode. This basically upscales standard dynamic range content to what the TV reckons is high dynamic range. It succeeds in giving your existing content a bit more contrast, especially in the highlights, without resorting to the gross exaggeration of Dynamic mode. I’m a traditionalist who doesn’t believe in messing with how your Blu-rays are meant to look, but some people will like this mode for its impact. 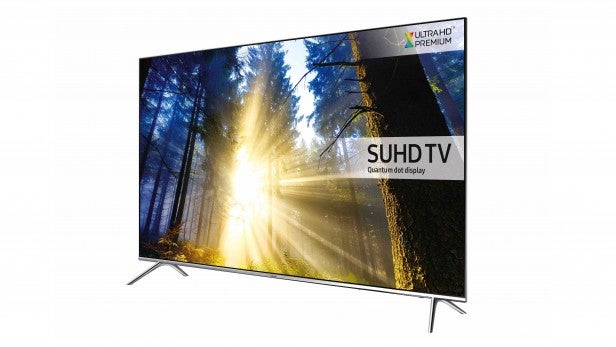 Samsung’s SUHD TVs have always impressed with their picture performance, and the KS7000 is no different. I start off in 1080p with a Blu-ray of Mad Max: Fury Road, and I’m very impressed.

The Samsung proves itself to be a proficient upscaler, making up the difference in resolution and displaying the movie in 4K with such ease that I’m amazed by the level of detail. It’s a clearly defined picture with clean lines and minimal noise.

Standard definition (on DVD and TV) fares less well, looking noticeably fuzzier and noisier, but that comes with the territory. The Samsung still makes a good go of it, and the definition is solid considering the content.

Time to see what the KS7000 is really capable of, so I put on Netflix and stream Daredevil (the amazing TV series, not the awful film) in Ultra HD. The whole point of 4K is enhanced clarity and finer detail, and that’s exactly what you get. There is remarkable insight into textures, from clothing to buildings, from Kevin Spacey’s wig to The Punisher’s stubble. The best part isn’t even the improved definition – it’s the subtlety that comes with it. None of it looks artificially etched like a TV stuck in shop demonstration mode.

Colours and contrast are impressive too, even in standard dynamic range. It’s a punchy picture, with a sizeable gap between the dark and the bright. But high dynamic ranges takes it further. 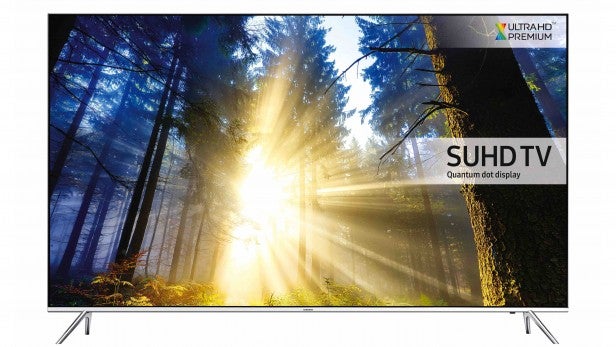 I put on Mad Max: Fury Road again, on UHD Blu-ray this time, and the HDR difference is a revelation. Put simply, it’s more lifelike. Sunlight and fire is brighter, shadows are darker and deeper, but more importantly the KS7000 is capable of pointing out the finer gradations at both extremes. Yes, that ball of flame looks dangerously bright, but I’m too busy marvelling at the differing levels brightness within. For years, an explosion has been a flat, orange affair, but now there are wisps of red and yellow, painting a more three-dimensional treat.

There is a price to pay for this treat, in the form of light bleeding. You’ll see some unwanted light in the dark bits of bright scenes. It’s partly down to how the KS7000 reacts to HDR: it detects when it’s being fed an HDR signal and adjusts the settings automatically, turning the backlight to maximum brightness.

This increased peak brightness is what allows the TV to show off fine and varying levels of luminosity in flames, but it seems the local dimming just isn’t strong enough to counteract 1000 nits (that’s 1000 candles’ brightness, fact fans), and the edge lighting – bottom lighting, really – makes for an uneven light output.

You could manually push down the brightness levels, but that results in the blacks being a bit crushed and lacking in detail. I pushed the backlight down, which does make for a less punchy performance, but the set is so bright anyway I felt happy that going down to 70/100 wasn’t too much of a compromise, and the blacks were better for it. 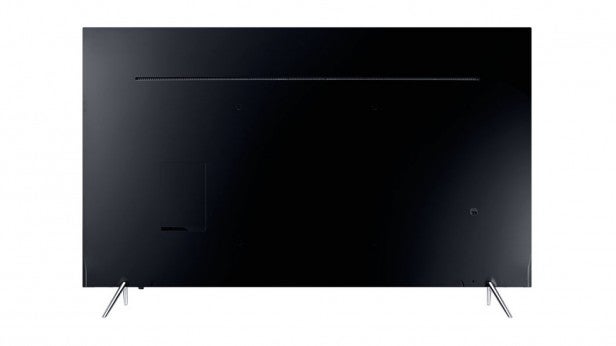 If I had to choose one element to criticise, it would be the audio performance. It’s not bad considering the TV’s slim profile, but it is a little thin for movies with big soundtracks. It’s perfectly serviceable for TV shows like The Great British Bake Off, though. The soundfield is large enough to fill a moderately sized room and it goes loud enough without breaking up or getting harsh. Still, for a properly cinematic experience, I’d say it’s crucial to add some proper speakers, or at least a soundbar. 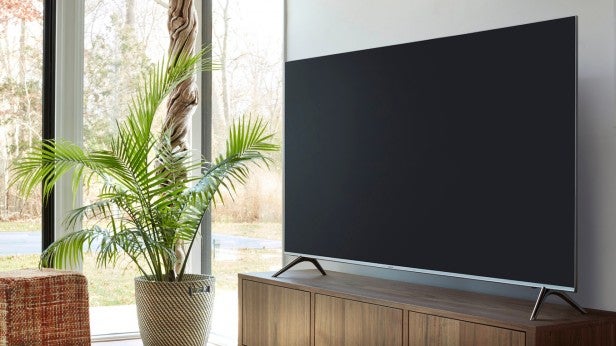 If you’re looking for your first 4K HDR TV, the Samsung UE49KS7000 would be an excellent choice. It doesn’t have the capabilities of the flagship TVs such as the Samsung UE65KS9500, but it does a great job of justifying the existence of 4K and HDR, and it rightly deserves its UHD Premium badge. Crucially, its £1,099 price tag is very reasonable for a display of this calibre. That makes it an ideal candidate for someone with an older HD TV, looking to upgrade.

An excellent first step into the world of 4K and HDR TVs.