Available now on PS4, Xbox One (with Xbox One X support) and PC.

Hear a strange sound emanating from a quiet Oxford cemetery? It’s probably Tolkien spinning in his grave. Perhaps he’d already started long ago, after Legolas’ Oliphant trunk-surfing antics in Peter Jackson’s The Return of the King. If he didn’t then surely the whole Tauriel/Kili/Legolas love triangle in The Hobbit would have done it, or maybe the dwarfs’ scheme to gold-plate Smaug in the second Hobbit movie. Either way, the spin rate is only getting faster, thanks to Monolith’s unbelievable Middle-earth lore-mangling in Shadow of War.

Middle-earth: Shadow of Mordor played fast and loose with Tolkien’s mythology, but the sequel’s approach is positively banzai. One minute Talion and Celebrimbor – our dynamic ranger/wraith duo in a single body – are forging a new ring. The next they’re tangled up with Shelob, now a suspiciously hot shape-shifting spider/witch/goddess thing. And that’s just getting started. Monolith’s orcs have always had more in common with Games Workshop’s greenskins than those of Tolkien, but this bunch of Aussie/cockney/Bristolian/middle-European nutters takes the biscuit. By the time you’ve kicked off a whole new war for Mordor, or battled Nazgul, trolls and Balrogs, nothing will surprise you.

Here’s my advice to Tolkien fans: get over it. Embrace the nonsense and the chaos. Think of it as National Lampoon’s Middle-earth, if it makes you feel any better. We didn’t praise Shadow of Mordor for its faithfulness to Tolkien or its storyline – and the sequel is even sillier – but for its satisfying combat, gameplay loops and systems. If you loved what the first game threw at you, the second gives you even more to love. 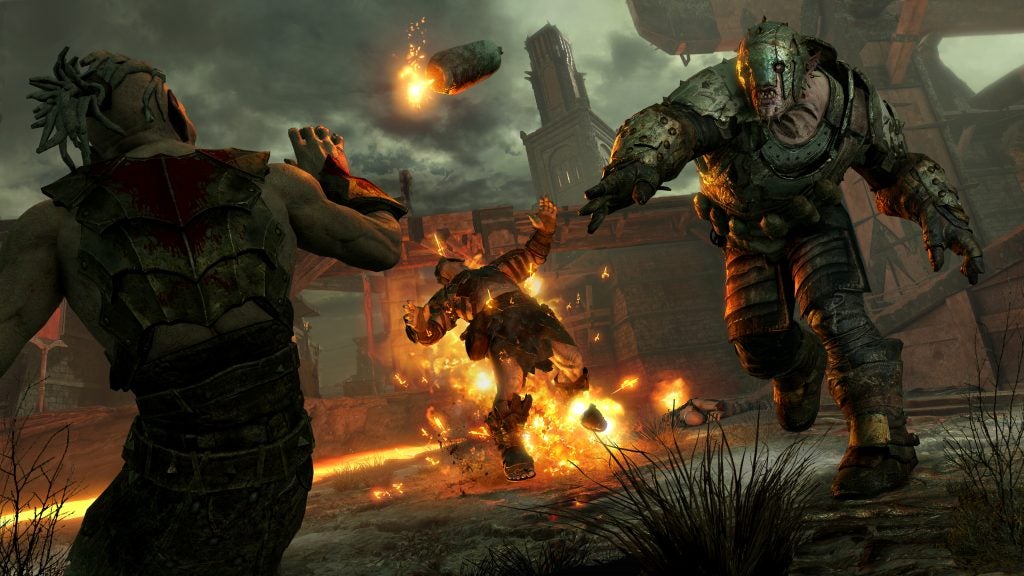 Honestly, it’s carnage out there. While Shadow of War apes the open-world style, stealth and parkour of Assassin’s Creed, the real joy lies in introducing Middle-earth’s orc population to the sharp and pointy ends of swords and daggers, thus earning experience points to spend on more inventive orc slaughter skills and a growing collection of more potent slashing, stabbing tools. Early on, you’re busy mastering the normal parry or evade and counter moves, but get halfway through and you’ll be freezing orcs as you vault over them, firing arrows while you spin gracefully mid-air, and finding myriad ways to torch, pin, poison, drain and generally harass the orcs. You can even make their poor little heads explode. What’s not to like?

And the revamped Nemesis system only amplifies the ultraviolence. As before, each region you visit has an army of orcs in charge – if you can call such a loose, warring conglomeration an ‘army’. To cripple the army, you take out the captains and warchiefs one by one. The clever thing is that the world reacts to each encounter. A captain that kills you grows in status and might start slaughtering their way up the orc corporate ladder. An ordinary orc that delivers a lucky, fatal blow might become a local legend, and scrap their way to captaincy.

In doing all this, Shadow of War makes the conflicts personal. Orcs who kill you will remember you and sneer, while there are incentives for you in dishing out payback, including better gear. You’ll loathe these guys, you’ll hate them, and you’ll love it. At one point I became so obsessed with taking vengeance on a slippery orc assassin, that I practically forgot the main campaign. At another point, I was rendered speechless when a captain not only killed me but broke my favourite sword. While playing the game I’ve had morning-long feuds and ongoing vendettas. Shadow of War might not have a great central narrative, but its complex, interlocking systems deliver plenty of great stories. 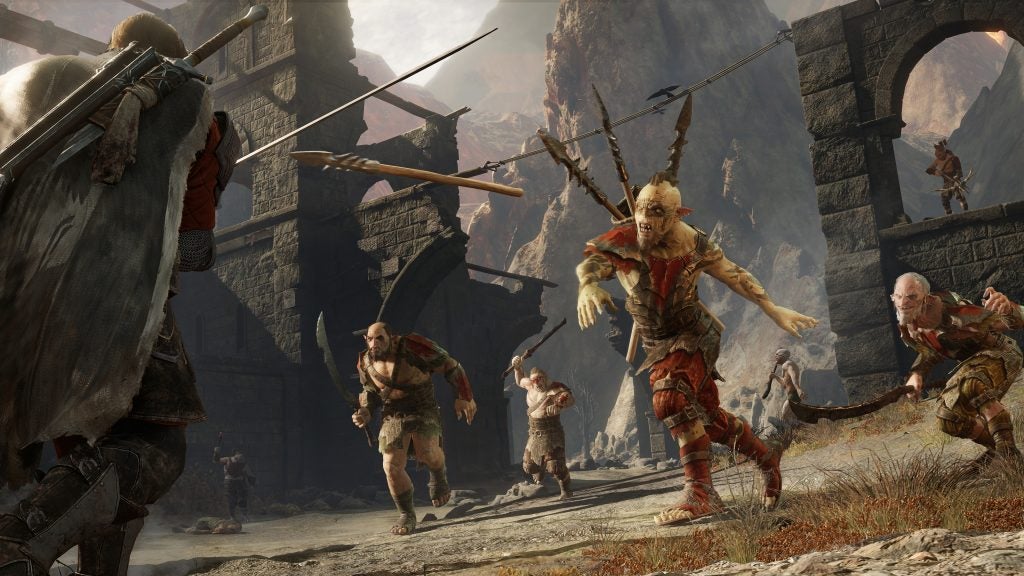 Systems-heavy open-world games have always suffered from a level of tedious repetition, but the Nemesis system gave Shadow of Mordor an extra dose of character and some much-needed chaos. Shadow of War doubles down on this, ensuring that – even in what appears to be a simple mission – anything might happen. You can go after one captain to find another waiting in ambush, while the journey to an objective could in moments descend into a crazy brawl, resulting in the elevation of a new antagonist.

Sometimes, this will drive you crazy – when the sudden arrival of a crazed orc psycho results in the escape of the captain you’ve pursued for the last half hour – but that’s a small price to pay for so much fun. It’s also here that Shadow of War plays its multiplayer ace. You can track down the captains who’ve slaughtered other players and complete bonus missions for taking revenge on another gamer’s behalf.

But Shadow of War’s ambitions go further than replicating what made the first game such a huge sleeper hit. The first eight to ten hours or so work as a kind of narrative-focused recap, once again getting you used to the core mechanics and bringing in new characters and the sequel’s expanded world. With the end of the first act, however, the game cuts loose, focusing less on destroying Sauron’s armies and more on recruiting your own. 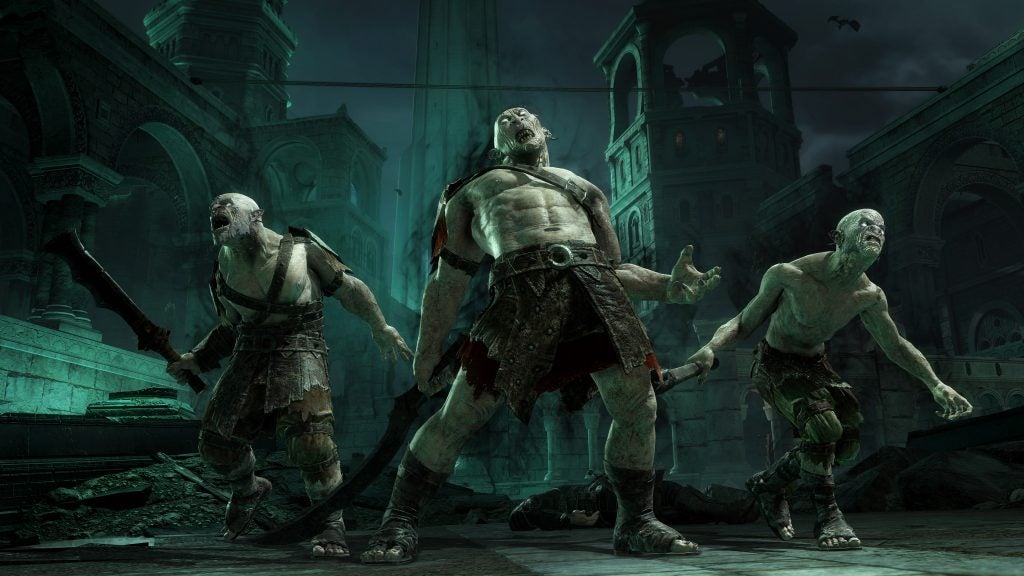 It’s all about domination – a nice move that sees you drain an orc of his malevolent free will so that he can serve you instead. You can dominate single orcs with ease or sneak up on them for a faster, hands-on domination. And while dominating normal orcs has its pluses – melee warriors will follow and fight for you; archers can be called to snipe on demand – the real fun is in dominating the captains. Smack one around until they’re cowering and weeping, and you can use the dominate move to recruit them to your cause. They can then command troops for you in the game’s large-scale battles, or act as bodyguards or – best of all – turncoat spies. Put one in a warchief’s gladiatorial fighting pits so that they’re noticed, and they could get called upon to act as that warchief’s bodyguard. Guess who they’re going to backstab when you turn up for a fight.

And what are you going to do with your army when you build it? Why, use it to take over the local manor, of course. Kill or recruit a few captains, slaughter or dominate a warchief or two and you can assault the region’s fortress, win its control points, kill the overlord and take over. These spectacular assaults, involving legions on both sides, are a huge highlight of the game – particularly as you unlock the ability to field more captains and units, or pony up for special troops that can climb or smash through fortress walls. Each one acts as an awesome payoff to a hard-fought mini-campaign.

This new focus on army building turns out to be a masterstroke. Some of Shadow of War’s mission design can be a little pedestrian – release five prisoners, poison six barrels or assassinate this orc – while there’s an awful lot of combat challenges and collecting side-questing to complete. But between the story missions, the Nemesis system and the army building, you always have a range of interesting stuff to be getting on with; stuff that makes you feel like more than just Middle-earth’s most powerful errand boy. And to be fair, the campaign does have some genuinely great moments, even if they smack more of teenage fan fiction than Tolkien’s more sober and scholarly high fantasy. 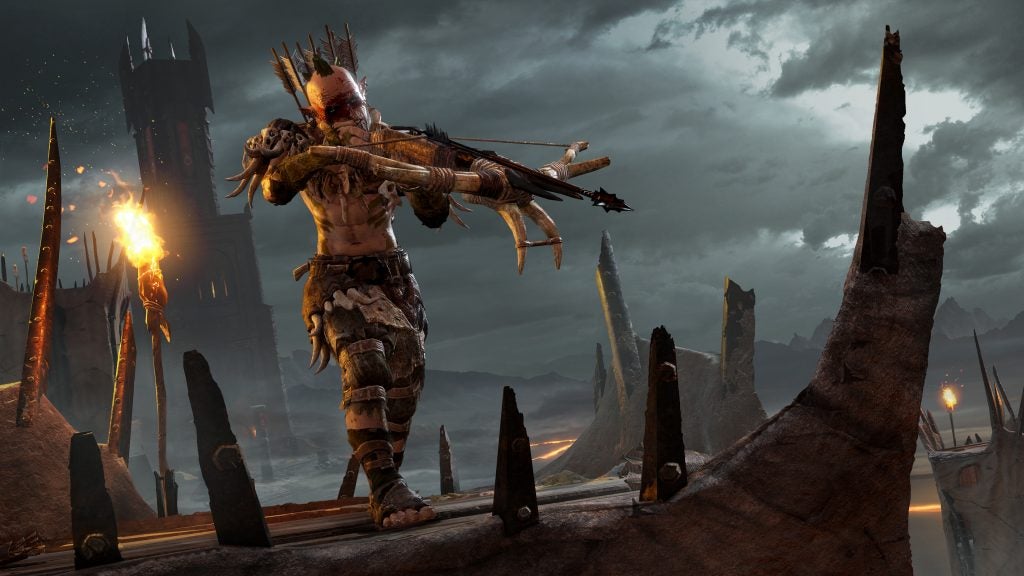 Even more than Shadow of Mordor, this is a game where you have myriad ways to make your mark upon the world. Ride around on a savage big cat, swinging your glaive around; fly on a drake, make things explode. But what I really like about it is that it gives you a more interesting world in which to do these things. Let’s face it, Mordor was a bit on the grey and brown side. Shadow of War’s larger chunk of Middle-earth takes in war-torn cities, lush jungles, forests, swamps, mountains, icy wildernesses and volcanic industrial hellholes. Each region has its own distinct look and feel. Play it on a high-spec PC or the PS4 Pro, and you’ll be amazed by the lavish detail in the costumes, skins and armour – although the scenery and lighting isn’t quite in Horizon Zero Dawn territory yet.

This is a big, ambitious sequel, and one that sometimes struggles with coherence, growing messy in the details. The auto-targeting, for example, does a great job of maintaining the flow of combat, but it also has a nasty habit of targeting orcs you’ve turned to your side, or selecting the wrong guy at exactly the worst moment, so your killer attack is wasted on a grunt, not a captain.

There’s an incredibly annoying thing where you have to manually pick up dropped loot, which makes unlocking all the wraith skills – including an auto pick-up – a necessity right at the start of the game. The skill tree, maps and inventory screens do a lot of heavy-lifting, but can be a pain to navigate in a hurry; and the skill tree isn’t always logical or easy to follow. Sometimes, you’ll be left wondering if there’s just too much going on. 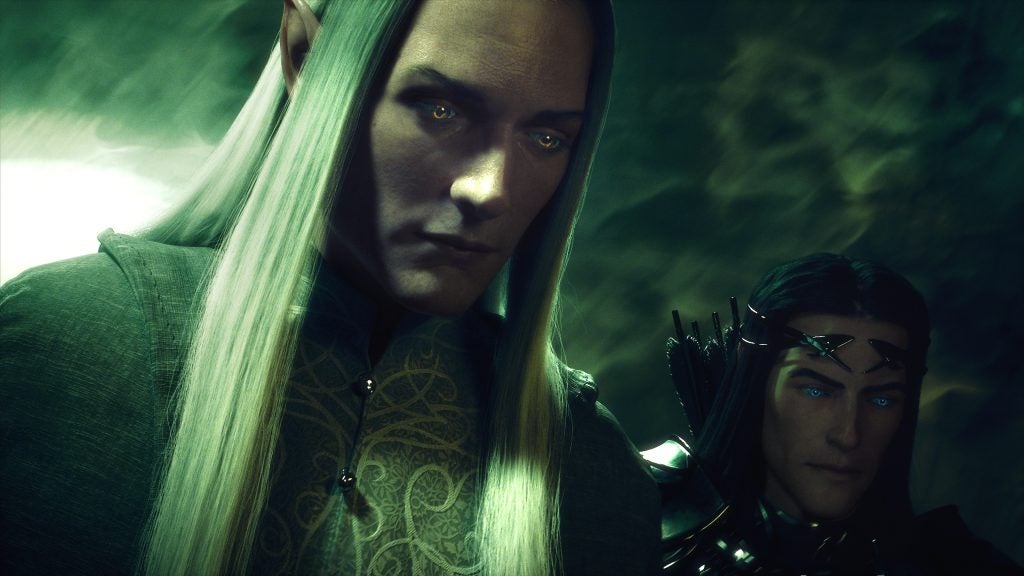 Shadow of War is also getting heat for its use of microtransactions. These only really come into play in what’s effectively a fortress defence endgame; you need to pay up either real or in-game currency to bolster your defences and keep the enemy hordes at bay.  Even here, though, they’re hardly a necessity, since the game throws so much in-game currency at you throughout its running time. Their very existence may be annoying, but microtransactions aren’t something that will seriously hinder your appreciation of much of the game.

It’s hard work following a sleeper hit, and at times Shadow of War looks like it’s trying to do too much over too wide an area for a bit too long. Its storylines run the gamut from deftly handled through to daft, and ludicrous liberties are taken with Tolkien’s characters and lore.

All the same, none of this matters because Shadow of War doubles down on everything that was already brilliant in Shadow of Mordor for a good 30-40 hours of stupidly absorbing stealth, action and warfare.

Try to deny its gung-ho, orc-slaying power if you want, but you’ll have more luck resisting Sauron with the One Ring than Monolith’s battle-crazed Middle-earth monster.

What do you think of Middle-Earth: Shadow of War? Let us know @TrustedReviews!