Although Rise of the Tomb Raider is the game that’s putting the tombs back into Tomb Raider, in reality this is a title that does so much more.

It manages to capture what made the original Tomb Raider games so successful and iconic, and bring it into a modern era – with a modern Lara Croft.

Since the 2013 Tomb Raider reboot, Lara has come a long way as a character, and the developers have too. Gone are the slightly horror movie-esque moments where Lara is weak and howling, along with the snuff-movie style deaths (apart from the occasional impaling). Instead this is a Lara who’s learnt how to handle pain, command an arsenal of weapons and kill droves of enemies.

While this review will be spoiler-free, Rise of the Tomb Raider tells a tale of loss, betrayal, mortality and ultimately it all becomes a little otherworldly – as has been the case with past Tomb Raiders. 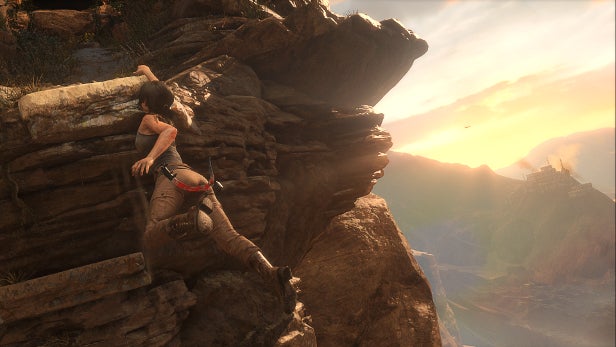 The original Tomb Raider reboot was accused of being too linear. Crystal Dynamics has taken this on board and introduced an open world feel for Rise of the Tomb Raider.

Although there are times when Rise of the Tomb Raider feels really focused on storyline, you can take a break whenever the need takes you. There are plenty of side-missions to pick up, hunting to do and even mini-quests to discover, such as destroying all the Soviet flags in a given area.

And this is where the true tomb raiding comes into play. The return of tombs starts gradually in Rise, with little puzzles intertwined with the challenges of the main story. But it was when I discovered one of the game’s optional “Challenge Tombs” that my heart really started to race. 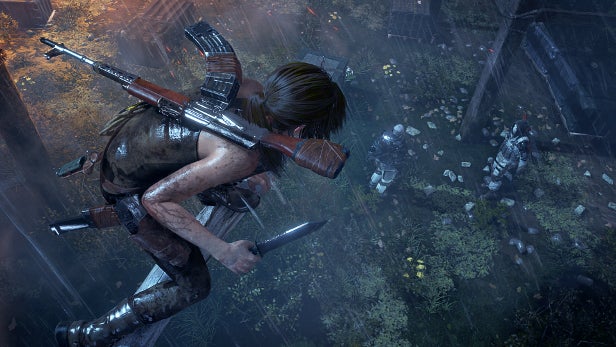 Even if you use Lara’s Survival Sense, activated by pressing R3, the tombs can only be completed by your logic and skill. There’s no hand-holding here, it’s back to old school Tomb Raider, but perhaps not as tricky as it used to be.

And there’s an incentive to completing these optional tombs too. Each tomb unlocks an ancient power that will be added to your skill tree, making Lara more powerful and equipped for the battles she has ahead of her.

Everything you do contributes to Lara’s experience points or XP in Rise of the Tomb Raider. And as the story unfolds, Lara gets stronger, more capable and her arsenal improves. 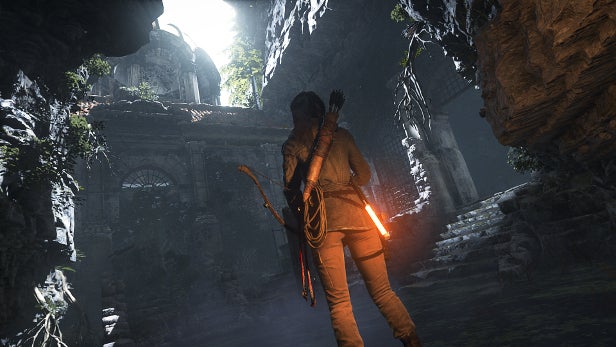 Her signature weapon from the reboot, the bow, is back with a number of upgrades and special arrows. But she will also gain explosives and a selection of shotguns, pistols and machine guns throughout the game.

The RPG elements are even stronger than they were before, with Lara’s own upgradeable abilities spread across three categories – Brawler, Hunter and Survivor.

Each weapon can also be upgraded to improve elements like reload speed, damage or impact radius. And a new crafting system makes scavenging and hunting more intuitive in Rise of the Tomb Raider. Lara will have to head to Base Camps to craft new items, equipment or arrows (although she can do the latter on the fly too) from the supplies she’s gathered on route.

No longer will plants and animal carcasses provide you with the nondescript salvage of the Tomb Raider reboot. Instead you’ll be gathering feathers from birds nests, poison from specific mushrooms, hide from a deer partially digested by a pack of wolves, and of course wood from saplings. These are just examples, but you’ll need them all if you want to be well-stocked for each mission.

And scavenging will become a constant hobby. I don’t think I’ve spammed the Survival Sense button as much before. 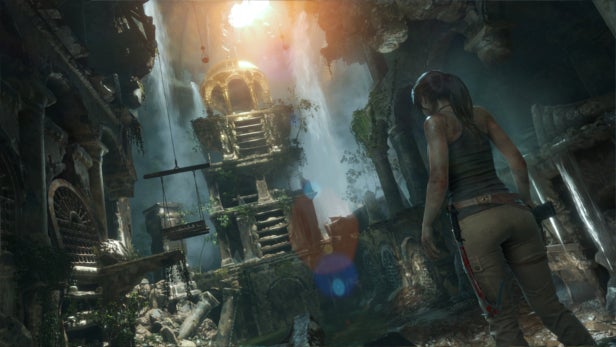 But the way the combat combines evolving weaponry and a choice of
gameplay styles – you always have the option to go in loud or opt for
the stealth and cover tactics – means that sequences are always tense.
If you’ve forgotten to pick up some more wood, you’ll run out of arrows
mid-fight and curse your laziness.

And as the traversal becomes
more varied and complex with your increased abilities, the world becomes
your playground and more like the Tomb Raider games I’ve always
cherished. 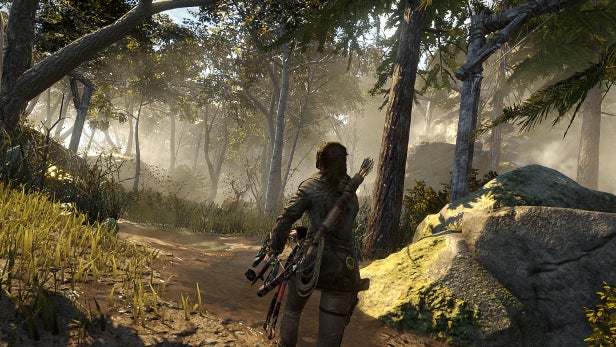 There’s only one issue with the gameplay mechanics as a whole. I’m not sure why Crystal Dynamics continues to dapple its gameplay with quick time events (QTE), especially when a single button press can mean instant death.

I can cope when QTE are used in minimal ways, such as a quick press of X to save Lara from falling when she’s not got a good grip on a ledge.

But when fighting a bear and it comes dodging with B and then hitting a perfect Y to deal the final blow, it takes some of the suspense and feeling of achievement out of that moment.

It’s something that only happens a handful of times in the game, but when I see a QTE prompt at a critical moment, I sigh and shake my head. After all the work the studio has put into this well-crafted and impressive game, QTE like these seem lazy. 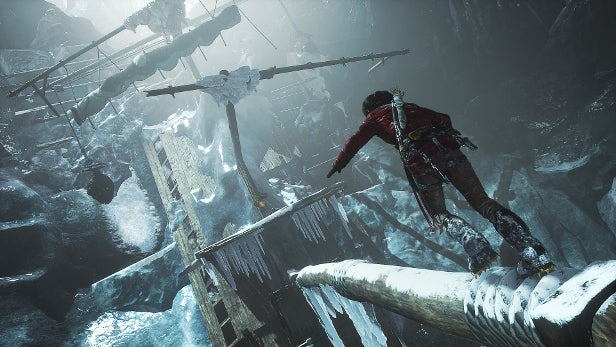 As for the graphics, the majority of the game takes place in Siberia, where the weather veers from fierce snowstorms and avalanches to bright, clear days. And regardless of the weather conditions, the world of Rise of the Tomb Raider is never less than stunning. The environments are often breathtaking, with some of the best snow and running water effects I’ve ever seen.

And the developers know it too, with the gameplay slowing down as you enter a new area just to showcase the crumbling ruins and ancient cities Lara’s about to clamber all over.

The one issue I have with Rise of the Tomb Raider’s graphics is Lara’s hair. I don’t know whether Lara has her own personal wind machine tucked away somewhere or whether her locks have a mind of their own. Whatever it is, her hair seems to be made of water, constantly in motion flowing around her otherwise beautifully captured and animated face.

It became so irksome at one point that I missed some crucial storyline details as I started ranting about it to my housemate, who was watching me play at the time.

Related: Xbox One backwards compatibility – Can I play Xbox 360 games on Xbox One? 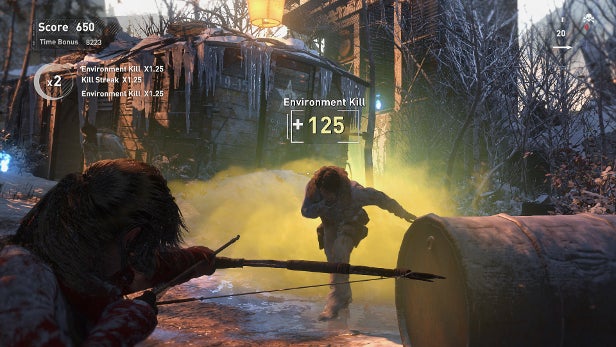 But enough about Lara’s watery hair. Because once you’ve finished the game and been wowed by its storyline and mechanics, there’s still more to do.

There’s no multiplayer option this time around, instead you’ve got Expeditions.

Accessible via the main title menu, Expeditions let you replay missions within the campaign without affecting your main save game. They also let you tackle each mission in a variety of ways.

Rather than just having to complete it again, you might decide to tackle a Score Attack version, where you’ll need to finish the level as quickly as possible, chaining together scores to build up your combo meter.

There are additional challenges to complete in these too, such as completing the level without dying or taking any damage. And you’ll need to learn about Cards too, as they have gameplay changing effects in Expeditions. For example you may pick a score multiplier card, or hamper your abilities in some way to earn more credits. You can buy further cards using those credits too. 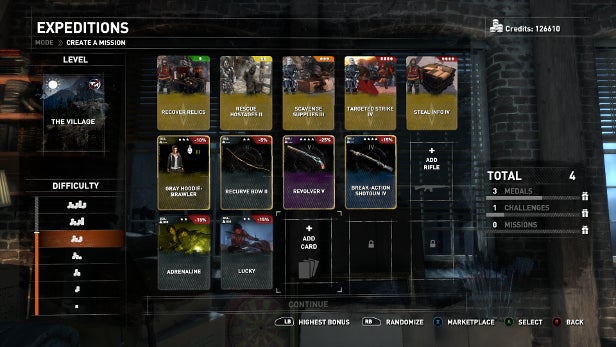 Other Expeditions let you to try each mission on a harder difficulty,
letting you to earn more credits and XP without having to replay the
entire game.

You could even opt to create your own missions and post them online for others to play.

For every challenge you complete you can collect medals and earn credits to spend in the Marketplace or in the main game.

There’s plenty to do in Rise of the Tomb Raider aside from just following the storyline – as tempting as it is to do so.

Verdict
Rise of the Tomb Raider takes everything that was successful in the 2013 reboot, including its stunning graphics and reimagined Lara, and takes it one step further.