What is the Wileyfox Swift 2 X?

The Swift 2 X is British upstart Wileyfox’s current flagship smartphone, sitting above the firm’s slightly cheaper Swift 2. For the extra cash buyers get NFC, an improved screen and upgraded camera.

On paper this makes it a valid rival to Motorola’s Moto G4 and Moto G4 Plus, which were TrustedReviews‘ recommended affordable phones last year. For the most part, the Swift 2 X is a great handset. However, issues with its unsupported Cyanogen software and underpowered CPU make it fall short of true smartphone greatness.

The Swift 2 X looks all but identical to its cheaper sibling, the Wileyfox Swift 2 – but this isn’t  a bad thing. The design appears to be a mix between an old HTC One and a Huawei Nova, featuring a slightly curved metal back, chamfered edges and a 2.5D glass front. The combination ensures the Swift 2 X is suitably comfortable to hold and makes it feel significantly more expensive than it actually is.

In addition, Wileyfox has done an excellent job of ensuring the phone ticks all the right usability boxes too, adding a rear-facing fingerprint scanner and the newer USB Type-C charging port.

The fingerprint scanner is often left off budget handsets; it’s doubly useful since it can be used to approve Android Pay transactions – which, thanks to the inclusion of NFC, is supported by the Swift 2 X.

The scanner works a treat and, bar a few instances when using the phone in drizzle, it accurately read my fingerprint pretty much every time. The inclusion of a microSD slot is another welcome addition that makes it quick and easy to upgrade the phone’s built-in 32GB of storage.

Build quality is generally good, but not on a par with the Moto G4. The Swift 2 X is sturdy enough to survive the odd drop – it survived an accidental encounter with my kitchen floor. However, the metal housing is a fingerprint magnet and prone to picking up scratches. In addition, the metal rear also suffers a significant amount of flex, which makes me nervous it may dent easily if met with even moderate force. 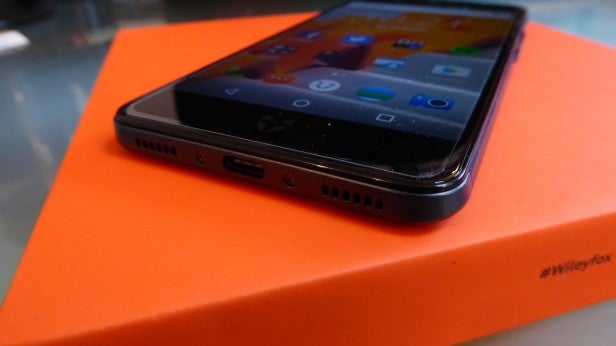 One of the Swift 2’s biggest drawbacks was its use of a 720p panel, which made it feel like a throwback to 2012, when 1080p screens were still considered a luxury. Luckily, Wileyfox has upgraded the Swift 2 X’s 5.2-inch screen to a 1080p Full HD resolution.

This may at first appear insignificant, but it means this Wileyfox handset matches the specs of its key rival, the Moto G4 Plus. In real world use I found that the screen is one of the best I’ve seen on a phone in this price bracket.

The IPS LCD tech means whites are wonderfully clean, even when compared to the screens of more expensive handsets, such as the Huawei Nova and Alcatel Idol 4S.

Colours appear a little warm for my liking and, as a result of the use of IPS, blacks aren’t as inky as more expensive phones, which tend to favour AMOLED panels. For the money, however, you aren’t going to get better.