What is the Moto G4 Plus?

The Motorola Moto G is the standard by which every budget smartphone is measured. Since the first version was released back in 2013 the Moto G has dominated the TrustedReviews Awards Budget Phone of the Year category. You can’t get better bang for your buck anywhere.

Up until now we’ve only had one version of the G released every year, but Lenovo, who bought Motorola last year, has this time brought us two: the Moto G4 and the Moto G4 Plus.

You might expect the G4 Plus to be larger than the regular Moto G4 – it’d make sense with a name like that, wouldn’t it? But you’d be wrong. The Moto G4 Plus is exactly the same size as the G4 and comes with the same whopper of a 5.5-inch screen.

So what is the difference?

Well there’s the price for starters. The Moto G4 Plus costs £199 for the basic 2GB RAM/16GB storage option. That’s £30 more than the equivalent Moto G4. The extra cash has been spent wisely, though – you get a fast, responsive fingerprint scanner and a better camera.

Is it worth it? Having used both phones for a while now I’d say yes, very much so. This is the best Moto G you can get right now.

The Moto G4 Plus is no style icon. It looks pretty similar to the myriad budget smartphones out there – glass slab front, plastic back.

At first glance I was underwhelmed, but I’ve come to appreciate the understated looks of the G4 Plus.

For starters the dark grey metal frame makes this feel like a phone that’s worth more and gives the G4 Plus a stability and robustness that’s rare in phones costing less than £300. I’ll attest to its durability, as I’ve dropped it twice – the second time on a hardwood floor – and it remains unscathed. 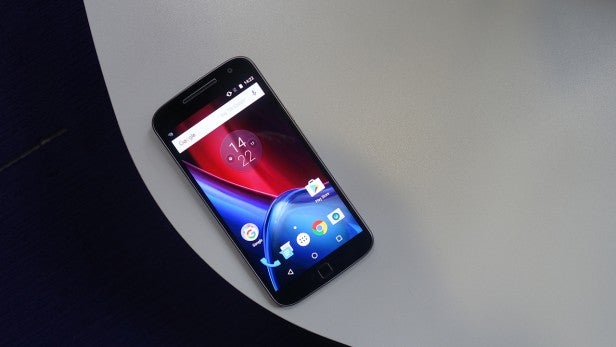 The soft-touch finish on the rear is reasonably grippy, but does get greasy quite easily. Pop the back off and there’s access to a microSD and Micro SIM tray – a Nano SIM adapter is included. The battery isn’t removable, however. Well, not without removing screws and voiding your warranty.

There are only two visible differences between the G4 Plus and G4. The first is a tiny extra sensor in the camera module for laser autofocus and the second is a small square at the bottom of the screen.

The latter is the fingerprint sensor and it’s rather good, if a little ugly. It’s nice and responsive and unlocks the phone as quickly as the Touch ID sensor does on the vastly more expensive iPhone 6S. Unfortunately, unlike with Apple’s phone, the fingerprint sensor on the Moto G4 Plus isn’t a button, so it doesn’t do anything other than unlock your phone. It feels like a wasted opportunity to add a nifty shortcut. 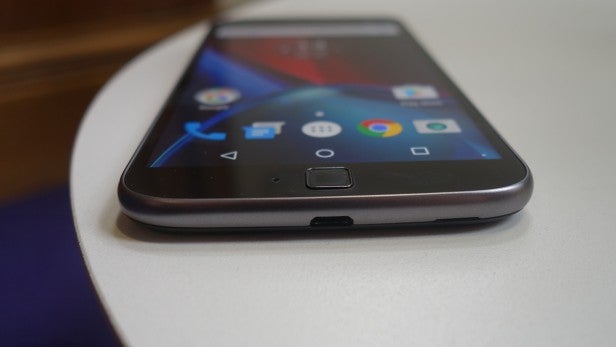 The biggest issue with the Moto G4 Plus is, well, how big it is. Even though it’s not as massive as the Nexus 6P, its 5.5-inch screen puts it distinctly into phablet territory and that means it’ll be more than a handful for a lot of people.

If you’ve not bought into the benefits of large phones, and prefer to have a petite device in your pocket or handbag, you might need to look elsewhere – the Moto G4 Plus is almost the same size as the giant iPhone 6S Plus. It’s a real shame Lenovo hasn’t given us the option of a smaller Moto G.

Still, if you can handle it there are a lot of benefits to having a larger phone, not least of which is the screen.

Every Moto G phone has had a good screen for its price, and the G4 Plus is no exception. In fact, its screen is fantastic and better than ones on some phones that cost a lot more.

For starters the resolution has been upped to Full HD, so it’s now pin-sharp. There are phones with higher resolutions out there, but I defy most people to notice the difference if the screen isn’t a few inches from your eyes. If you enjoy a bit of mobile VR, you might want a sharper panel, but for everyone else it’ll be absolutely fine.

The display technology used is still IPS. That means you don’t quite get the same black levels as with AMOLED phones like the Samsung Galaxy S7, but it’s very bright and colourful.

Colours are punchy, blacks decent and it has enough brightness to be viewed outdoors on even sunny days. 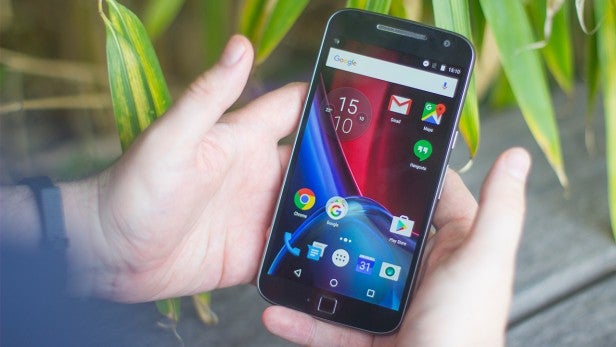 It really is a joy to use and makes the Moto G4 feel luxurious and like a much pricier phone than it is.

The only negative when it comes to image quality is that the colours aren’t perfectly accurate. The Simpsons’ yellow skin has a faint greenish tinge to it and reds can be a bit too oversaturated, but this is still a far superior screen to any Moto G before it.

The screen is very fast and responsive to touch, although palm rejection isn’t perfect. I regularly find myself zooming in when trying to hit a link on a webpage because the bottom of my thumb interacts with the screen when I’m stretching.

One of the best features of the Moto G4 Plus is its Android software. I’ll take a closer look at it on the next page.