While we were reasonably happy with Lenovo’s first attempt at an Ultrabook, the Lenovo IdeaPad U300s, it wasn’t one of the cheaper ultraportable laptops on the market, and considering it had a few issues, it wasn’t one we would recommend saving up for after alternatives like the Samsung Series 9 900X3B. However, not only has the U300s dropped in price, Lenovo has also released a budget Ultrabook for around £600, the IdeaPad U310. 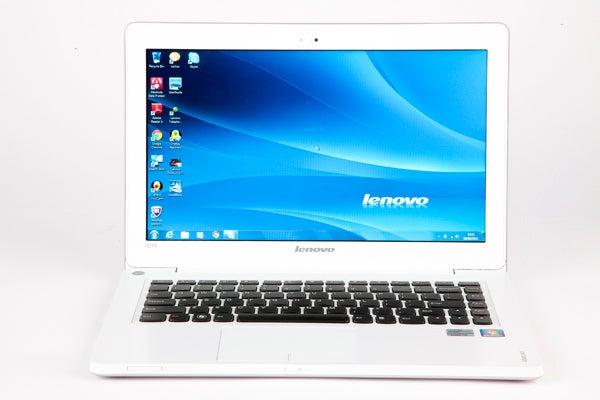 Design
Though its model name may suggest the U310 is a step up from the U300s, that’s certainly not the case, which you can tell as soon as you touch its plastic insides. Mind you, the U310 is a reasonably attractive laptop, with a metal outer shell that’s available in a range of colours. Obviously, being the macho chaps that we are, we went for a hot pink model – just to mix things up a little. But if that’s not your cup of tea or laptop colour of choice, you can also get the IdeaPad U310 in bright blue or black. 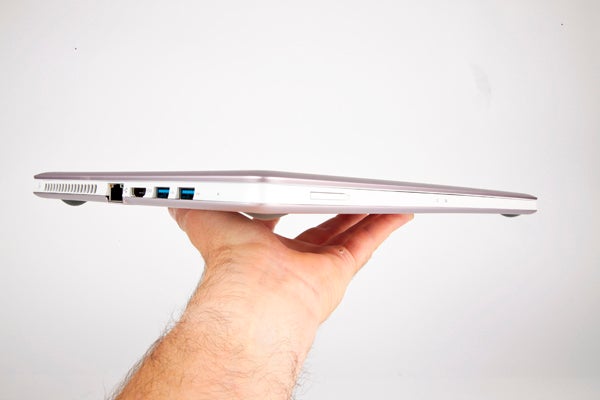 The inside, meanwhile, will be white plastic that’s not even pretending to be metal. This generally looks pretty good, if you like white. But once you open the U310 up, most people won’t mistake it for a particularly premium Ultrabook – an impression not helped by the massive bezel around its screen.

Build quality is superb on the outer metal panels, and a tad less impressive on the inside, where there’s a hint of creak below the screen. Shockingly for a Lenovo laptop, there’s also a significant amount of flex in the keyboard area. We also came across a quirk where carrying the laptop with one hand and putting pressure on the bottom area under the touchpad would disable it and its buttons… bizarre. 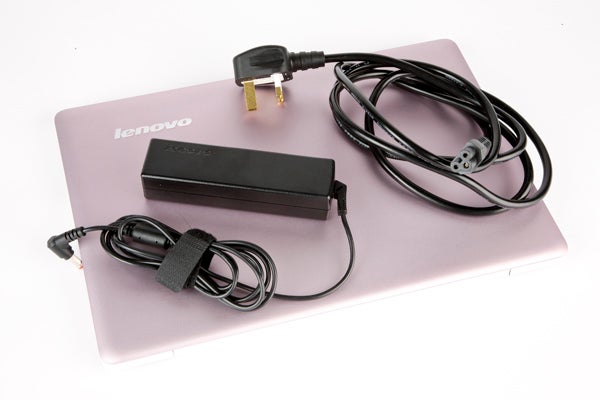 Weight is a bit high for a 13-inch Ultrabook, at 1.7kg. Again, we guess that’s the price of affordability, but after just reviewing the 1.09kg Toshiba Portege Z930, this thing feels like a brick.

Connectivity
One of our complaints with the U300s was that it offered no SD card reader, and thankfully this had been addressed by the newer IdeaPad U310. On its left you’ll find non-Gigabit Ethernet, HDMI and twin USB 3.0 ports; its front houses that card reader; while the right gives you a single USB 2.0 port. 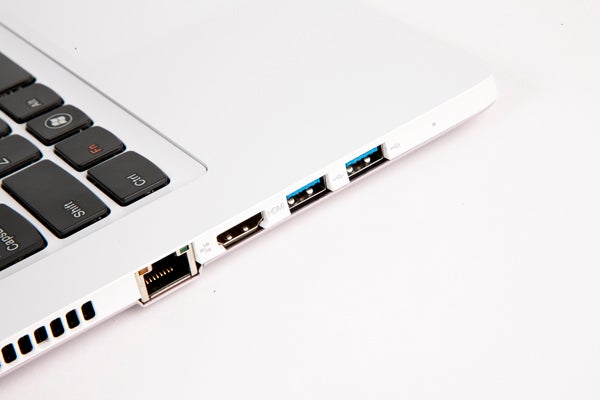 You also get Wi-Fi N but no Bluetooth. It’s a pretty standard complement that will cover the needs of most, but lacks the faster Ethernet, Bluetooth and high-resolution DisplayPort output of some of its rivals. Rounding out the features list is an HD webcam. 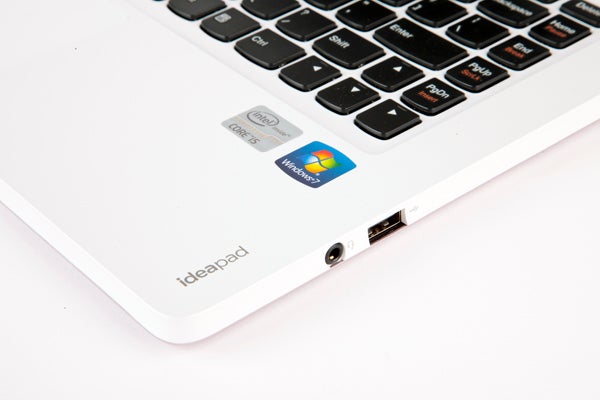 Usability
Usually, going Lenovo is a safe bet for a great typing experience, though it’s only really guaranteed with the ThinkPad line. Still, despite the flex and lack of backlighting, the IdeaPad U310 is rather pleasant to type on.

Layout of its chiclet keyboard is flawless, and the well-spaced keys offer a good amount of travel with positive feedback and a defined click, from which the flex only marginally detracts. 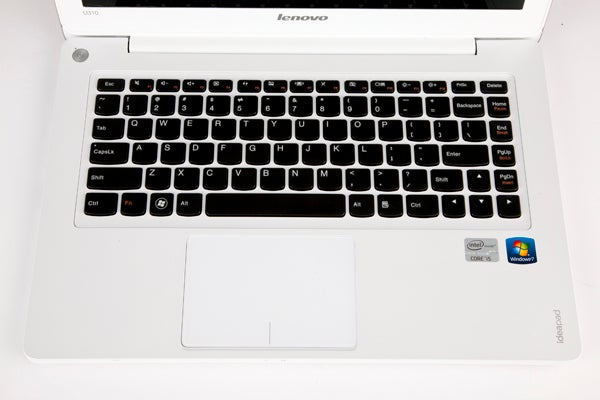 Though it’s plastic rather than glass, the U310’s large touchpad is very similar to the rather good example found on the Lenovo IdeaPad U300s. It’s a treat for the fingers, which glide easily across its smooth surface, and is responsive without being temperamental.

Screen
Regarding the Lenovo IdeaPad U310’s screen, it’s a fairly standard 13.3in TN affair with the usual 1,366 x 768 resolution. It does make an above-average impression though. For one thing, there’s little sign of backlight bleed or clouding. For another, dark detailing is good if not perfect, and we’re also major fans of the display’s matt finish, which eliminates annoying reflections. As usual with screens using a TN panel rather than IPS/PLS or MVA/PVA however, it’s the viewing angles that let the side down, with contrast shift across the board. 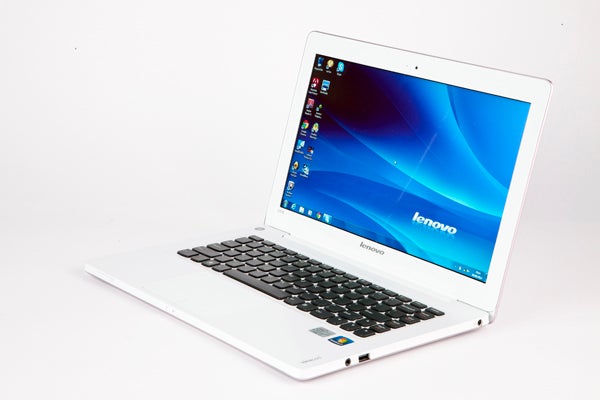 Speakers
Lenovo doesn’t make much fuss about the stereo speakers in the IdeaPad U310, and that’s a good thing, as they’re pretty average. Sound comes across with a hint of distortion and everything sounds pretty canned, but the maximum volume levels aren’t bad and on occasion the mid-range comes through with a surprising amount of depth. Still, for proper entertainment headphones will be required.

After a decent set of headphones? Have a read of our Best Headphones 2012 roundup. 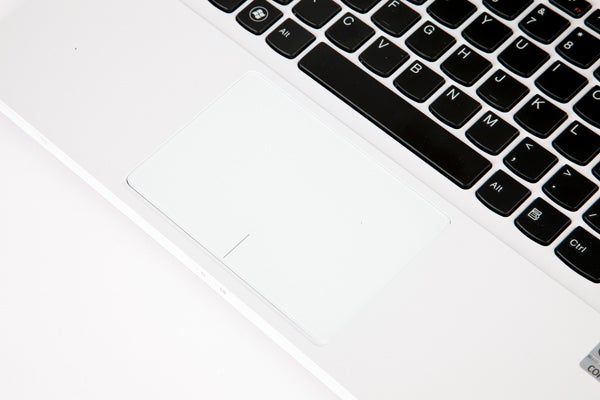 Performance
Thankfully, despite being a ‘budget’ product, the Lenovo IdeaPad U310 is available in a few configurations, from our model with a speedy Core i5 and hybrid SSD hard drive, to a Core i3-equipped plain HDD version that foregoes the Ultrabook name because of its lack of quick storage.

With an ‘Ivy Bridge’ Core i5-3317U at the helm, our Lenovo IdeaPad U310 will happily power through most workloads. This dual-core processor runs at 1.7GHz but can turbo clock to 2.6GHz and has hyper-threading support for up to four virtual cores. 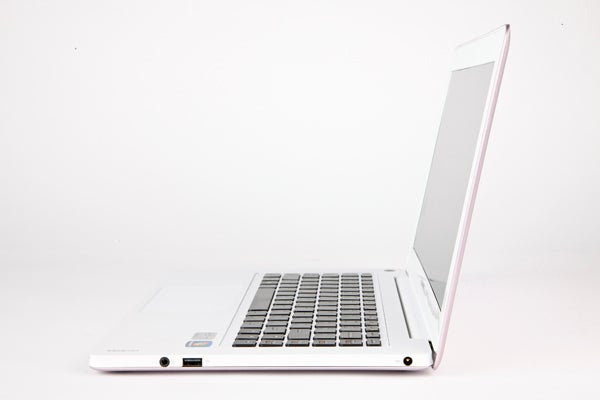 All U310s come with the usual complement of 4GB of RAM, but in storage there are a few differences to look out for. Most, like our review sample, come with a 32GB/500GB hybrid SSD/HDD, but some of the cheaper ones sport a plain hard drive, so it’s something to look out for when buying.

As for gaming, thanks to the significant improvements in the performance of Intel’s integrated graphics with the latest HD 4000, you’ll be able to run a few decent 3D games if you can live with (really) low detail settings. Just remember that Core i3 models of the U310 will actually be ‘Sandy Bridge’ for a while to come, meaning you’re getting Intel’s rather rubbish HD 3000 solution instead. In other words, if you fancy a bit of light gaming, go with the Core i5 model. 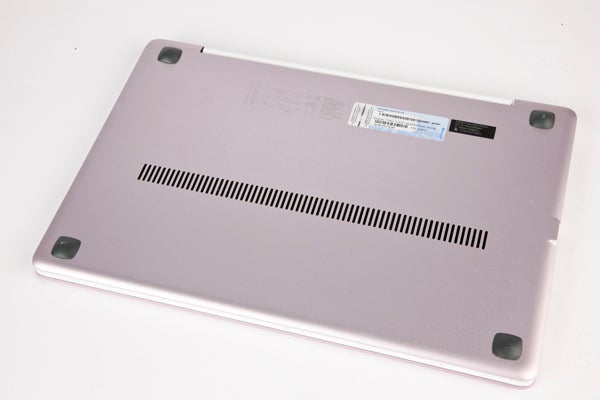 Battery life
Unfortunately, it doesn’t seem like Lenovo has made use of the IdeaPad U310’s thicker chassis to improve battery life. In fact, the U310 didn’t last as long as the Lenovo IdeaPad U300s in our testing, coming in at six hours and 44 minutes. Mind you, that’s not bad going by Ultrabook standards in general.

Value
Now here we have a really tough customer. The Lenovo IdeaPad U310 is a mix of attractive and cheap-looking, its screen and speakers are on the good side of average, its connectivity and battery life adequate. If you can live with the keyboard’s flex, it also offers one of the nicer typing experiences on a ‘budget’ Ultrabook. As such, its £600 configuration with a Core i3 and hybrid drive presents pretty decent value. 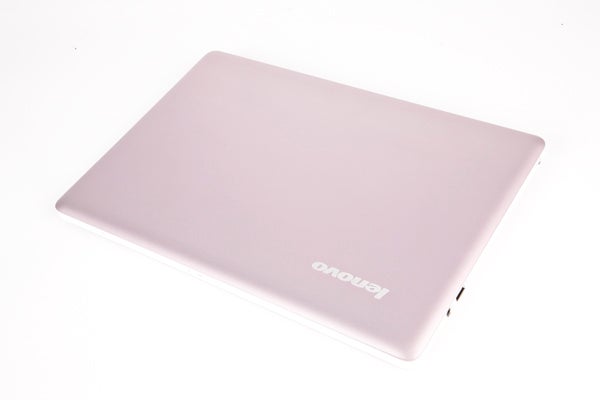 However, as the U310 is on the heavy side for an Ultrabook, we wouldn’t ignore ‘ordinary’ 13in laptops, where that kind of money can buy you a better spec. Certainly, with the £650 Core i5 U310, it’s worth spending an extra £50 to get something like the HP Folio 13 with 128GB SSD instead of the Lenovo’s hybrid drive.

The Lenovo IdeaPad U310 is far from an ideal Ultrabook, but in most cases it’s good enough. Taking its relatively affordable price into account, this makes it worth considering if you’re after a fairly stylish 13-inch ultraportable. However, its weight stretches the limits of what an Ultrabook ought to be about, and means you should consider ‘ordinary’ 13-inch laptops too.