Since its inception, Apple’s MacBook Air has become the benchmark by which all other ultraportable laptops are measured. We’ve seen a few cracking shots at the throne from the likes of the Samsung Series 9 900X3A, but overall there wasn’t too much competition. 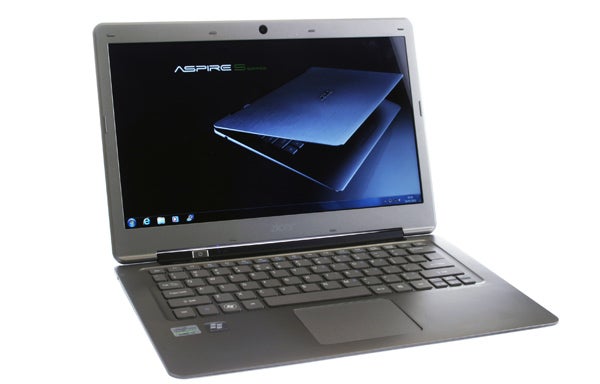 That’s all about to change thanks to Intel’s Ultrabook concept, which sets a number of requirements to ultraportables: ultra-thin (less than 1in), well-performing (Core i3 minimum), well-connected, stylish (and usually metal-clad); in other words, essentially MacBook Airs running Windows. Today we’re looking at the first UltraBook to hit our labs in the form of the Acer Aspire S3. So let’s see how this 13.3in ultraportable holds up.

On paper, things are certainly impressive. The all-metal S3 is made from a combination of aluminium and magnesium, offers specs up to a Core i5 CPU backed by 4GB of RAM and a 240GB SSD, and all the usual niceties such as Bluetooth 4. Perhaps the best news is that prices start at just a penny short of £700.

As with every Ultrabook we’ve seen to date, the S3 is a thing of beauty. Well under an inch thick at its thickest point (17.5mm to be exact), this slim beast will fit neatly in most compartments. You are stuck with the 321mm width and 217mm depth dimensions though, as there is no 11in model in Acer’s Ultrabook line-up. Still, at a mere 1.4kg, it’s not much effort to carry. 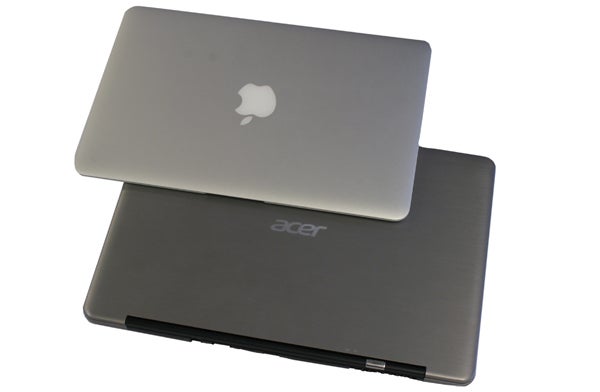 The outer shell is made from brushed aluminium, while the inner panels are constructed from magnesium alloy. The latter gives a pleasantly warm and relatively soft surface for your palms to rest on, offering the benefits of plastic (to which it feels very similar) – without the drawbacks.

Only the rubberized black hinge spoils the S3’s clean lines a little, but overall it’s still a darn attractive Ultrabook. Even the keyboard has been given a grey finish, which doesn’t look quite as classy as the black most rivals use, but at the same time blends better with the rest of the chassis. 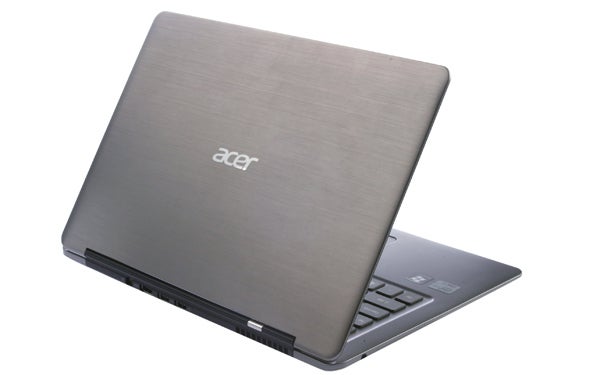 Build quality is excellent, with no unwanted flex or creak anywhere. Obviously the fitted panels don’t give the same feel of unbreakable solidity as the MacBook Air’s milled unibody chassis, but it’s still up there with the best of the rest. We also like the absence of sharp edges, which are an annoyance with Apple’s laptops.

Connectivity is our first disappointment, and it’s a pretty major one. To keep this laptop looking good from as many sides as possible, Acer has moved most of the connectivity to the rear, meaning you’ll only find a single headphone/microphone combi jack to the left and the SDXC card reader to the right.

This leaves twin USB 2.0 ports and HDMI at the back, and leads to similar issues as with Dell’s recent XPS 14z: it makes USB devices awkward to plug in and exposes them to possible damage when picking the laptop up or putting it down at a slight angle (as many people frequently do). The USB ports are also far too close together.

And it’s not just location we have issues with; it’s frankly astonishing to find a new premium laptop that doesn’t offer USB 3.0, and the connection selection on rivals like the Asus UX31 Ultrabook (USB 2 and 3, HDMI and DisplayPort) really puts the S3 to shame. The only positive for Acer is that its HDMI port is full-size.

Chiclet keyboards are another inevitable for Ultrabooks. Thankfully, the S3 holds up well here. Layout and shortcut assignment are good, including brightness and volume controls on the slightly cramped cursor keys. Meanwhile, keys are well-spaced and not too slippery. Key travel is shallow but feedback is still nice and crisp, making for a pleasant typing experience.

Our main complaint is that the keyboard here isn’t backlit. This might not have been so bad were it not that nearly every rival – from the MacBook Air 13in and Samsung Series 9 900X3A to Asus’ Zenbooks – offers it.

Offering a single, clickable surface, the S3’s multi-touch
touchpad is virtually identical to that found on the Air and 900X3A, except
smaller. Navigating is effortless and accurate, and the click is well defined
and positive.

Things pick up further when we get to the bright 13.3in display. Despite offering a standard 1,366 x 768 resolution (rather than the 1,600 x 900 or 1,440 x 900 on some rivals), it managed deep blacks unmarred by clouding or light bleed, with excellent black differentiation that clearly showed the darkest shades in our greyscale test. Perceived contrast and colour vibrancy are further aided by the screen’s glossy finish, though this also gives rise to annoying reflections. 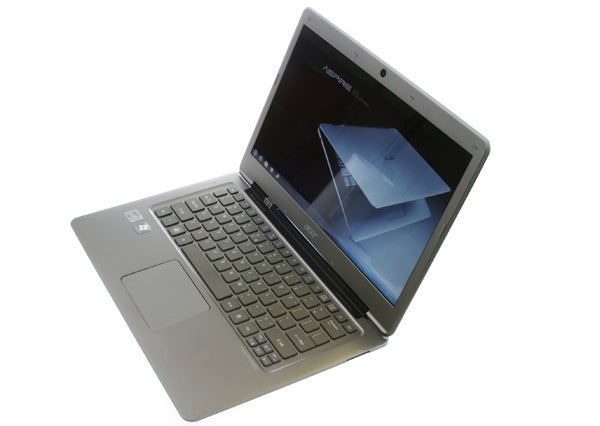 Viewing angles are on the good side of average, allowing you to watch some entertainment with a friend – though vertical viewing is as temperamental as ever, and you’ll need to take some care at which angle you tilt the screen back to ensure you get the best experience. There was little to no sign of banding or other artefacts, and sharpness was good. Overall then, while it doesn’t live up to the surprisingly superb TN panel on the Samsung Series 9 900X3A, the S3 holds its own in the visual department.

Audio, on the other hand, is undeniably pathetic. If you can even hear the anaemic maximum volume of its speakers past ambient noise, you’ll notice how lacking in clarity and detail trebles are, while bass sounds like an asthmatic mouse coughing.

Annoyingly, Acer has sent us a configuration of the S3 that you won’t actually be able to buy in the UK (US only, as is lamentably often the case). Our sample sports a Core i7 CPU combined with a whopping 240GB SSD, which is a stunning performance combo that catapults this laptop to the top of the ultraportable chart. However, on this side of the Atlantic you’ll have to pick between a Core i7 backed by a 500GB hard drive, or a 240GB SSD paired with a Core i5 – something to keep in mind when comparing numbers.

Disclaimers aside, our Core i7 is of the dual-core variety with support for four virtual cores, and it will clock up to 2.8GHz on a single core from its default 1.7GHz. In other words, for all but the heaviest users there’ll be processing power to spare. Much the same is true for those forced to go with the Core i5, as it should prove easily adequate for the majority of tasks.

It’s backed by the standard 4GB of RAM you’ll find in most laptops, and of course that massive 240GB SSD. This helps it to achieve some stunning scores in our tests, doubling drive performance maximums from previous ultraportables.

Graphics are the only weak spot, though Intel’s integrated HD 3000 is no longer the embarrassment it once was. Just to give an idea, at 720p and medium detail it managed a perfectly smooth 41.7fps in TrackMania Nations Forever, but in Stalker Call of Pripyat things went downhill with a 16.4fps overall average at the same settings.

Throughout it all, the S3 does get warm but not unpleasantly so. And while quickly becomes audible under load, it produces an even whir that rarely gets too annoying.

Battery life is more important than ever on Ultrabooks, as the integrated batteries are either not user replaceable or very difficult to replace at best. Here the Aspire S3 doesn’t hold up too badly, managing five hours and 20 minutes away from a socket. However, even considering the Core i7 CPU under its hood it’s far from best of class, with the Samsung Series 9 900X3A giving you over seven hours. We’ll have to see how other Ultrabooks hold up, but we’re guessing the S3 certainly won’t rule the roost when it comes to time on the go. 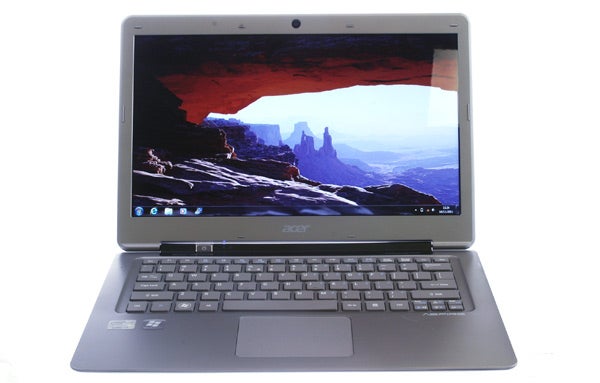 Finally there is value to consider. With a starting price of under £700, Acer offers the cheapest 13.3in Ultrabook on the market (compared to the £1,000 Asus Zenbook UX31E and comparable ultraportables like the £1,164 Samsung 900X3A and £1,099 Apple MacBook Air). However, a moving parts hard drive rather than an SSD is the price you pay, together with its other limitations. The 240GB SSD version takes care of that particular down-side for a very reasonable £,1080, but you’re still stuck with a lack of fast or convenient connectivity, no backlighting for its keyboard, and inferior battery life. Basically then, it all comes down to what you’re happy giving up, or paying more for.

As the first Ultrabook we’ve reviewed, Acer’s 13.3in Aspire S3 has a lot to live up to, and on quite a few points it manages it. We’re impressed with its performance, build quality and screen, while it also scores points in the looks and usability categories. Only connectivity, audio and battery life cause any serious concern, while missing features like keyboard backlighting detract from the premium feel. However, if you’re happy with the slim girl next door rather than a super model, the S3’s low price means it’s definitely a contender.