What are the Ted Baker Rockall?

If you needed any more confirmation that headphones are in fashion, this is it. However, these aren’t the terribly overpriced headphones you may be expecting.

For a new name in audio, the Ted Baker Rockall compare pretty well on sound. But there are some slightly disappointing design aspects. 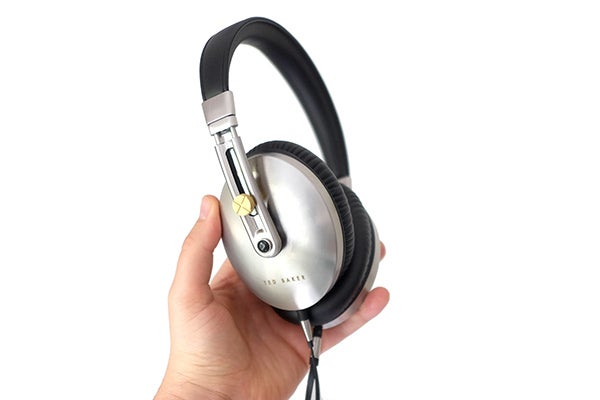 The Ted Baker Rockall are over-ear headphones. They’re reasonably big, but there has clearly been some effort put into making sure they’re not too big. These are style headphones, after all.

They look pretty good too. The outside of the ear cups are made of brushed aluminium, and it’s the real stuff, not plastic dressed up like metal.

Their frame is metal too, and has a deliberately distinctive look that’s out to create a strong impression without being truly attention-grabbing. You can also get these headphones in three shades.

We took a look at the most conventional of the lot. This version has a silvery brushed metal exterior with black pads and headband padding. There’s another one that trades the black padding for brown, and a rather more gaudy-looking version with gold-coloured metal outer bits and brown pads.

We don’t like the gold version, but maybe someone will. 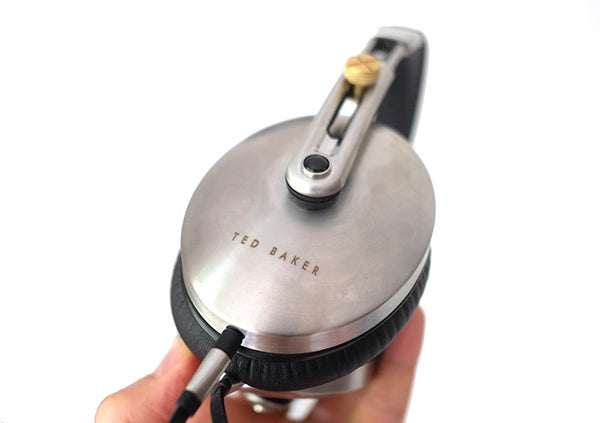 The overall look of the Ted Baker Rockall is solid, and among its peers can go head-to-head with sets that cost around £100 more. However, look a bit closer and there are some signs that these headphones haven’t quite been designed with the care of some of the best-known rivals.

First, the strange gold-coloured metal wheels on each side are completely without function, and don’t really add anything to the look either. We can’t help but feel the Ted Baker Rockall headphones would actually be better off without them.

More importantly, though, the headband doesn’t function particularly well. The headband adjustment is manual, a bit jittery, and tends to adjust itself on your head, but not in a good way. It generally ends up uneven, meaning there’s a fair bit of readjustment to be done to get a proper fit. It’s not good. 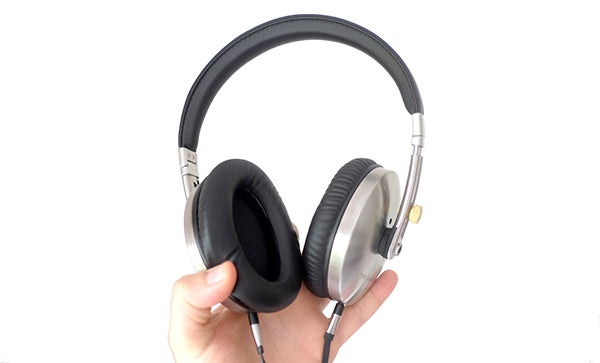 We get the feeling that the Ted Baker Rockall went from the design blueprint to the final product a little too quickly, without quite enough steps in-between to get the headphones feeling entirely right.  At least these are Ted Baker’s first headphones – a pretty good excuse.

The fake leather used to cover the ear pads and headband padding isn’t too hot either. Almost all leather-like pads use fake leather rather than the real deal, but the stuff the Rockall headphones use isn’t particularly convincing. It’s just that bit too… plasticy. As we’ve noted, these headphones are a good deal cheaper than most of their full-size style peers. It’s worse than that of the £130 Bose AE2 and £200 Nocs NS900 too, though.

In one other slightly odd design choice, the Ted Baker Rockall also have a leather-effect texture flat plastic cable. Functionally it’s perfectly fine and there’s a 3-button remote for iOS devices, but once again we’re not entirely sure it’s in-line with Ted Baker’s brand.

Ted Baker is meant to be about style, but leather effect cables are seriously naff. 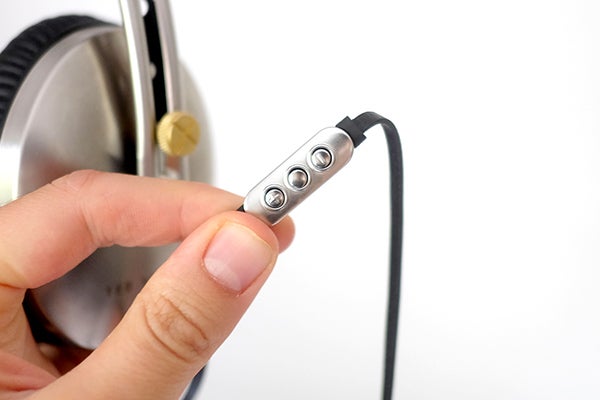 The cable is removable, although as it plugs into both ear cups rather than one, it’ll be slightly trickier to replace. It does use 3.5mm sockets, though, so not by much. Dual-sided cables are also naturally more snag-able when you’re out and about.

A revision or two away from perfection? It’s a recurring theme in the Ted Baker Rockall headphones. And aside from the wonky headband, this shows up in the noise isolation – it’s actually quite poor for a pair of over-ear headphones.

As they create a more regular fit with your head than on-ear headphones, over-ears headphones like these can often offer isolation that’s second only to a good pair of IEMs (in-ear monitors/headphones). However, here the isolation is pretty basic. And, a clue that the design’s finishing is at fault, it improves significantly if you just push on the back of the earcup.

The core issue seems to that it’s actually pretty difficult to get the ear cups to make a consistent seal with the area around your ear, and keep it.

It’s not a deal-breaker unless noise isolation is a top priority, but it is slightly disappointing. 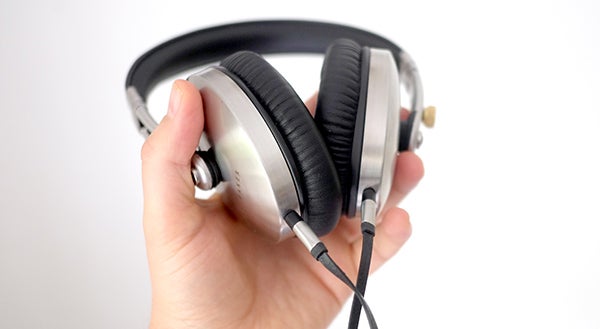 The Ted Baker Rockall have fairly conventional 40mm dynamic drivers, but the sound is actually a little bit different from the style headphone norm. There’s no destructively bloaty bass here, but a rather more balanced, grown-up signature – a pleasant surprise.

Without a sound-clogging bass presence, these are more versatile headphones than many style-driven headphones. Tonally, it’s not all that far removed from something like the Bose AE2, Bose’s attempt at a more accurate-sounding headphone than is offered by its noise cancelling models.

The Ted Baker Rockall have a bit more mid-range presence than either the Bose AE2 or Sennheiser Momentum, though. That’s no bad thing, but when the mid-range fidelity is just acceptable – not really high-end – it makes these headphones a little less smooth-sounding than some of the competition. 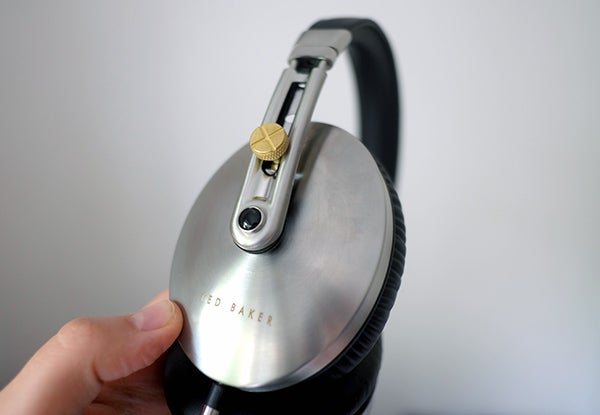 However, they have no real issues with sibilance, and are in no way a harsh listen. If you want that velvety-soft sound you might be better off with the Bowers & Wilkins P3.

The same is true if you’re after a real meaty bass thwack. Lacking it is what helps give the Ted Baker Rockall a relatively balanced sound, but if serious bass presence is what you’re after, it’s worth looking at the much more bassy Beats Solo 2 or Nocs N900 Live. There is bass here, but it’s quite low-key.

Looking side-by-side at the Ted Baker Rockall and Sennheiser Momentum, it’s easy to see where Ted Baker has been inspired by this set, more than the ultra-populist Beats Studio. They have a similar design, and comparable aims in terms of sound – good aims too.

But what can you get by upgrading the extra £90 for the Sennheiser Momentum? In use, we found the biggest difference to be in design convenience. The headband of the Momentums is just so much easier to live with. Fit and comfort are a lot better, even though the Sennheisier pads actually give your ears fairly little room, as they are smaller.

Sound quality is better too, but the Ted Bakers can at least hold their own. The Momentums have a much richer bass response, and a wider, more coherent soundstage. 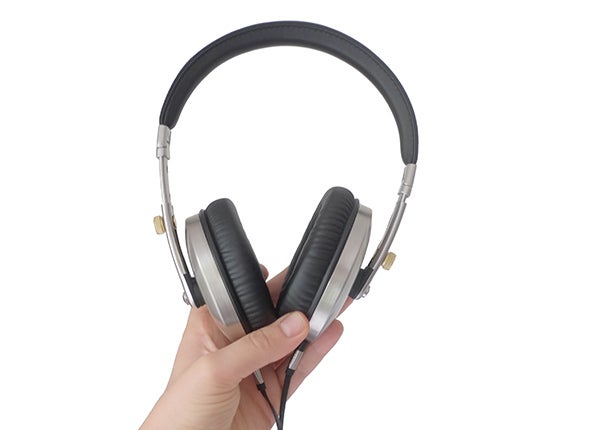 Should I buy the Ted Baker Rockall?

The Ted Baker Rockall are style headphones with a sound signature that’s a bit closer to that of brands with a lot more experience in the field. You get good sound here too, especially when compared to something like the less balanced Beats Solo 2.

However, there are some design issues. Several elements of the Ted Baker Rockall feel like they should have been canned after the first draft stage, but the one that really affects their use is the headband. It just doesn’t work well enough, and this affects comfort, fit and noise isolation.

The Ted Baker Rockall are priced at a surprisingly reasonable level for such brand-driven headphones, and their sound quality is unusually well-balanced too. However, a few design issues stop them from quite hitting the bullseye.