The Nocs NS900 Live are on-ear headphones that cost a smidge under £200. This makes them a bit more expensive than the Beats Solo 2, which are probably market leaders in sales, if not sound quality.

This set markets itself as a bit more of a pro DJ pair, though. They’re serious. While we’re not entirely convinced by their positioning, or the sound in every respect, they do have tremendously powerful bass that doesn’t upset the sound balance anywhere near as much as most other bass-heavy sets. 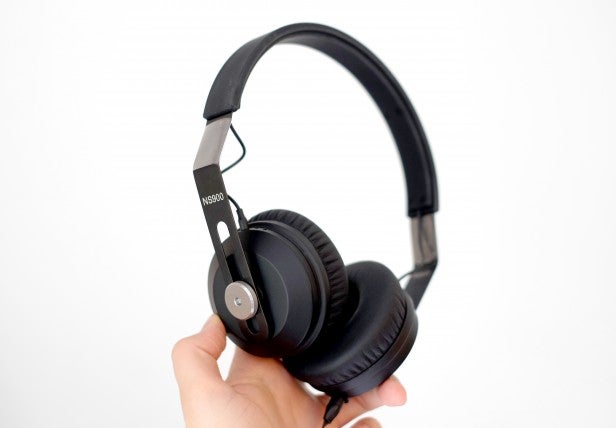 The Nocs NS900 Live market themselves as DJ headphones. However, they only have a few characteristics traditionally associated with this breed.

They are pretty hardy, the steel band structure is pretty happy with being twisted and turned without any adverse effects. However, the NS900 Live do not fold up. While we’re not DJs, most DJ headphones fold up to both avoid taking up too much space among all the other kit a DJ needs and to allow them to be worn one-eared.

The Nocs NS900 Live are also on-ear headphones where most DJ sets are over-ear. The larger over-ear kind are generally a bit comfier and offer better sound isolation.

For an on-ear pair, sound isolation is very good, but the fairly tight gripping force of the NS900 Live headband means they’re not comfy to wear with glasses, and you’ll always be pretty aware you’re wearing them either way. They don’t disappear on your head like, for example, the Bose AE2. 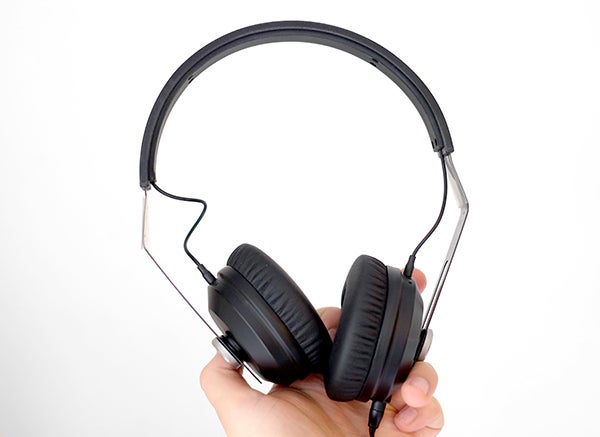 The truth is, of course, that DJ headphones have really just become headphones for people under the age of 30. Traditional DJ headphones still exist, but these are more everyday headphones with a bass-skewed signature. Indeed, now that headphones are trendy they’re basically neck jewellery anyway.

For £200, they aren’t particularly flashy, but they do feel fairly well-made. The ear cups are soft-touch plastic, the faux-leather pads are generous in size, and while the headband has an odd kink to its shape, it appears to be there to provide the right pressure distribution without making the band stick out 3ft from your head. 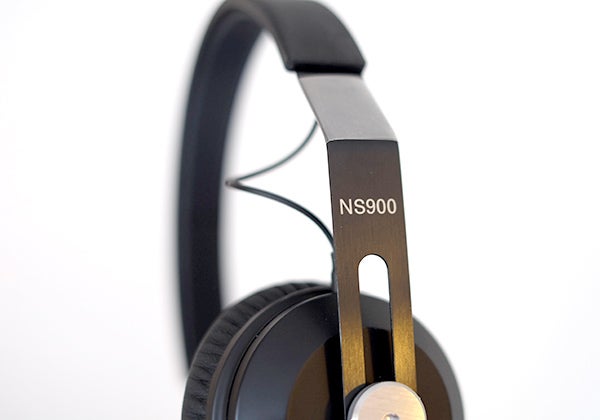 The design promotes outdoors flexibility more than all-out comfort. While the pads are thick the headband pressure will be a bit much for some (this can be ‘stretched out’ to an extent) and the headband padding is pretty hard rubber rather than soft foam. It’s there to keep your headphones on your head more than to provide a luxurious, soft feel. We tried them out in the gym and, sure enough, they stayed in place.

One of the few real bits of DJ cred the NS900 Live have is with the cable selection. The cable is removable using a twist-to-lock mechanism (which we found very temperamental next to competitors) and you get three cables. Two are portable-style ones intended for used with iPhones and Androids respectively – they have 3-button and one-button remotes.

The other cable is coiled, keeping it out of the way while giving you
extra length to move away from your equipment. Coiled cables are much more
useful for the studio and mixing desk than the commute. The Nocs NS900 Live may not
exactly be a pure DJ headphone, then, but there is some excuse for
giving them such a tag. 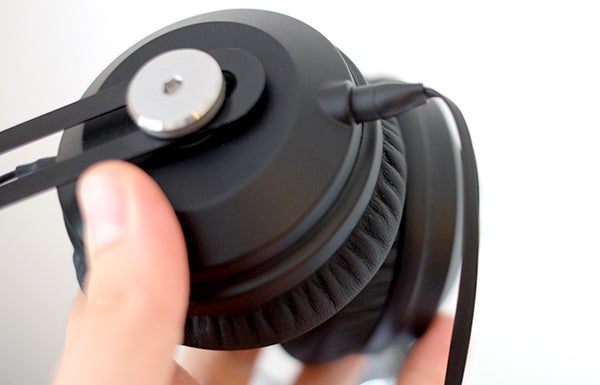 Arguably, the real DJ element of the Nocs ND900 Live, though, is the bassy sound. They offer extremely good low-frequency bass response.

The kind of thuds you get from synth bass hits and even acoustic kick drums with the NS900 Live headphones positively shames the majority of on-ear headphones. We’re generally quite sensitive to, and critical of, overly bassy headphones, but there’s quite a thrill to the power of the low bass and sub bass registers on offer here.

Bassy headphones often spoil the rhythmic intensity they want to highlight by having a bass emphasis that moves up into the warmer “mid-bass” territory. But here it all sticks to the lowest end of the frequency scale meaning you don’t get the kind of splodgy ill-timed bass that we complain about so often as something that fugs up sound.

If you need a sort of rhythmic aid, you could do a lot worse than the Nocs NS900 Live. This is the kind of bass the Beats Solo 2 should aspire to in order to really nail the bass-heavy character. And for a closed headphone, the chunky bass manages not to trample over everything else pretty well.

However, for more general listening, it is an unavoidably unbalancing element. If you want a natural sound, you probably don’t want the Nocs NS900 Live headphones.

They don’t help themselves on this front in the other parts of the frequency range, either. The treble is quite harsh and prone to sibilance, which we found routinely grating, or at least fatiguing with most kinds of content. ‘Esss’ sounds have a serrated character that just isn’t particularly nice to listen to.

The Noca NS900 Live’s mid-range is quite weak compared with the pounding bass and the live wire treble too, and what’s it is somewhat coarse as well. A bit of mid-range smoothness could really have eased-up what is quite an intense and tiring sound signature for normal listening. 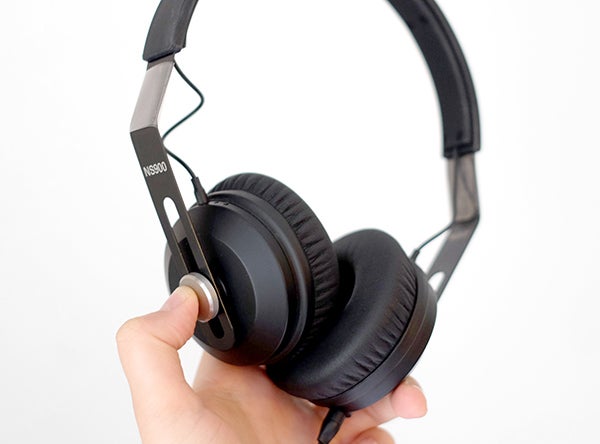 An obvious question for a portable headphone that’s out to appeal to a slightly more enthusiast crowd than Beats is – how do the NS900 Live compare with the Sennhesier Momentum, our go-to portable pair?

Both have very good low-bass performance, but as the Nocs NS900 Live have a thinner mid-range, it comes more to the fore in the Nocs. The sound signature of the NS900 is brighter too.

As a day-to-day headphone, though, we’d pick the Sennheisers. Their soundstage is wider and offers better stereo imaging, and the smoother-sounding mids and treble are much easier on the ear. We should note, though, that the Noca NS900 are generally available for around £60 less, despite having a supposed RRP of £250 (close to the Momentum’s £260). Unfortunately, Sennheiser’s Momentums are so nice that the price hasn’t dropped since their introduction 18 months ago. 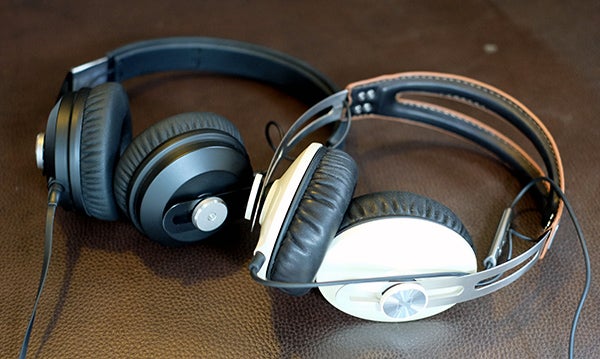 The Nocs NS900 Live are for people who want powerful bass, but not the ill-disciplined, clouding bass that’s common to many bass-heavy sets. On this front they’re a great success.

However, in other respects they’re a little harder to recommend. The on-ear style and tense headband don’t make them super-comfortable, while the sibilant treble is also a little uncomfortable on the ears.

If you’re after a DJ headphone, why not consider a proper folding pair like the Technics RP-DH1200? They’re a fair bit cheaper to boot at around £120.

If you want an everyday pair of headphones to use for the next few years, something that offers good bass and an upgrade to the usual style rubbish, we think the upgrade to the Sennheiser Momentum is worth it. Taste in headphones is a peculiar thing, though, and some of you may love the ‘high dynamic range’ style of these somewhat-aggressive-sounding cans.

The Nocs NS900 Live will make jaws drop and eyes pop with the depth and power of their bass. But sibilant treble and some comfort concerns mean they’re not for everyone.

Next, check out our round-up of the best headphones