Exclusive to Nintendo Wii U
There’s an argument – and we know it might sound crazy – that you’re better off buying a Wii U this Christmas than a PS4 or Xbox One. It’s cheaper, it’s definitely cheerful, and between Mario Kart 8, Bayonetta 2, Super Mario 3D World and The Legend of Zelda: Wind Waker HD, it already has a handful of killer apps. Much to our surprise, it’s an argument that’s bolstered by the arrival of Super Smash Bros for Wii U. Having been left underwhelmed by the Super Smash Bros. 3DS version, we’re pretty much knocked out by the game’s home console outing.

Why? Well it all comes down to a hard-hitting combo of exuberant visuals, polished gameplay and generous game modes that makes the latest Smash Bros hard to resist. It’s a more satisfying game to play solo, and better than ever to play with friends. It’s also another great example of Nintendo’s excellent fan service, featuring characters and stages from across the company’s history, from the Game and Watch era to the present day. Like Mario Kart 8 or Super Mario 3D World, it’s infused with nostalgia without feeling backwards. 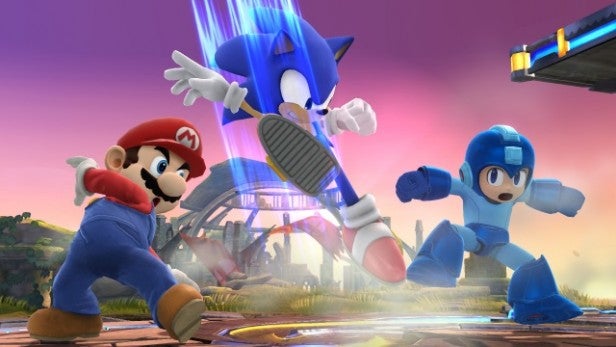 The core gameplay hasn’t changed significantly, but then it didn’t need to. Four Nintendo characters square off in a 2D platform game arena, using an array of hand-to-hand combat moves, melee weapons and ranged attacks to wear each other down until a decisive strike can smash your rival off the map. Blocks and dodges can be used to ward off damage, while double-jumps and special grappling moves can be used to get you out of the danger zone and back in the game.

While you’re scrapping, power-ups sporadically appear giving you a mega-weapon with which to beat the enemy senseless, a pokeball that spreads flame and destruction, or a variety of other perks and pitfalls that can push the outcome one way or the other. Whoever dishes out the most knock-outs while avoiding them themselves comes out on top. 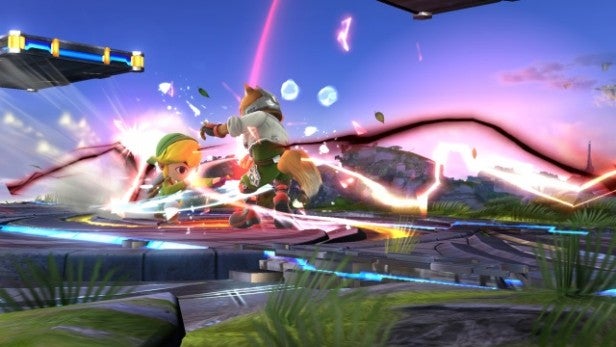 It’s a deceptively simple game, with a minimal control set and no lengthy combo chains to memorise. Your moves come down to timing, positioning and how you tie in your movements and attacks. Oddly enough, this makes it less of a button masher than many more conventional fighting games. Come to some matches or game modes with only the most basic idea of the controls and you’ll get roughly nowhere, but the more time and effort you put in to get to grips with the mechanics, the different characters and their moves, the more you’ll get out.

One challenge is simply finding the right character to start with. Super Smash Bros for Wii U has the same 49-strong roster as the 3DS version with most unlocked from the start. Beyond Mario, Luigi, Yoshi, Bowser and obvious candidates like Donkey and Diddy Kong it features stars from a bewildering range of franchises, including Legend of Zelda (with two variants of Link), Animal Crossing, Kid Icarus, Metroid, Fire Emblem, Pikmin, Pokemon and Xenogears, plus some oddities from Duck Hunt and Punch Out. 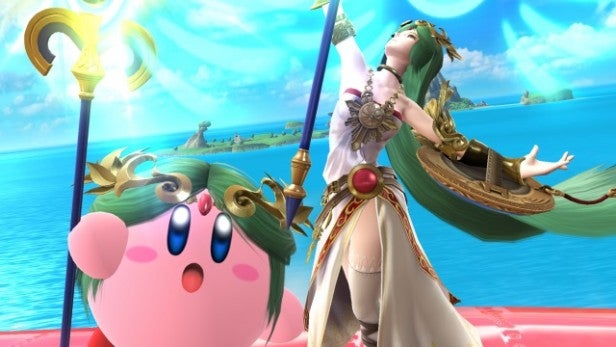 Up to a point you can separate the characters out into heavyweight brawlers, acrobatic blasters, swordsmen and women and all-rounders, but that would be to neglect the vast range of different attacks and weird special moves that each star has to offer. Bowser, Ganondorf and Donkey Kong might all have a similar heft and power, but the way you fight with them is far from identical.

And if you thought the character roster was a challenge, then try picking a game mode. Beyond simple four player and eight player Smash modes we get the all-new Smash Tour and a range of special modes and bonus games, including a retro-flavoured Classic mode, two Special Orders challenge modes where you can, effectively, wager gold on your performance in yet more challenge matches. Then there’s an Event mode where you fight different combinations of enemies with different win conditions and an All Star mode where you can put your fighter against the other fighters, era by era. 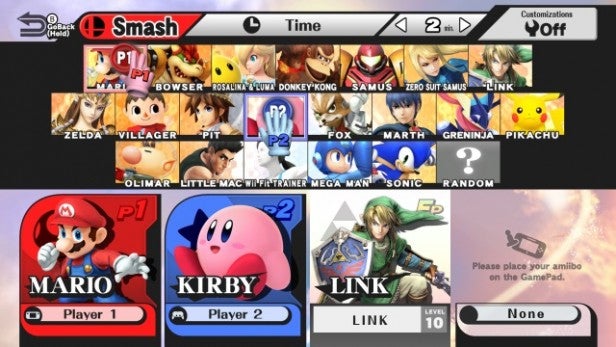 On top of that lot, there’s the Stadium mode, including the brilliant if short-lived Target Blast (Smash Bros meets Angry Birds), Multi-Man Smash mass brawls and the Home Run distance challenge. Many of these modes are available solo or cooperatively/competitively in a duo or four-man team.

Super Smash Bros is at heart a multiplayer game, but the solo modes are surprisingly varied, interesting, challenging and engaging; the kind of thing where you’ll have a quick ten minute go, then realise that an hour has gone by. The game also manages to tie all this content together with a grid of achievements you can unlock by working through the different modes, plus gold currency you can use in-game and unlockable costumes and features for your characters and Miis. 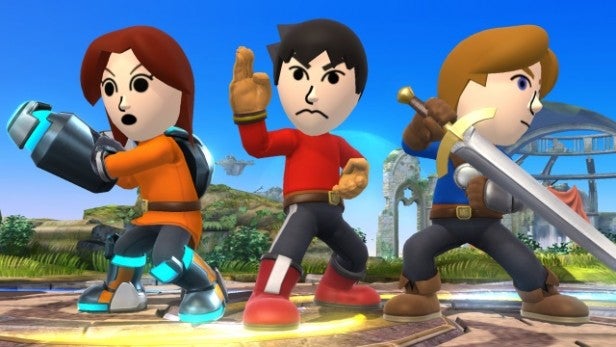 As in the 3DS version, the latter are now playable and customisable, with a choice of three main play styles – brawler, swordfighter and gunner – and options to mix and match unlocked special moves. This is a fine idea in solo play, but an even better one in multiplayer, where you can watch the household’s Miis cheerfully skirmishing away on the TV. If smashing Bowser off the stage is fun, then blasting your nearest and dearest off the screen is hard to beat, even if they become a little less nearer and dearer if you do so repeatedly.

Super Smash Bros for Wii U ditches the 3DS version’s Smash Run mode, where you fought enemies and grabbed power ups over a large scrolling stage before a final battle. Instead, we get Smash Tour: a weird, violent variant on Mario Party where up to four Miis rove around a board, collecting fighters, perks and power-ups with each throw of the dice, then meeting up for a brawl when two or more players collide. You can play it solo, but it’s a great way to mix things up as a party game. You’ll find yourselves squabbling over favourite characters and moaning bitterly about cruelly deployed traps and perks. Overall, it’s a change for the better. 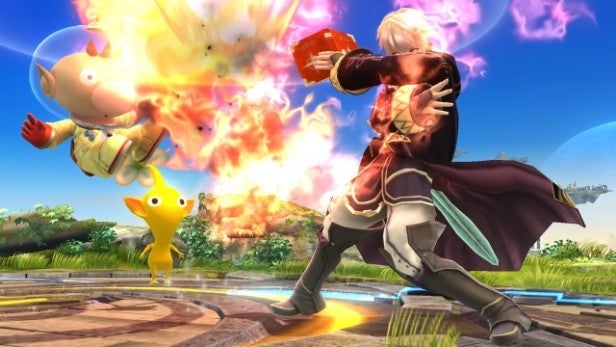 Local multiplayer with people you already know is always the best way to enjoy Smash Bros, but Super Smash Bros for Wii U comes with comprehensive online options where you can play for fun or for glory, spectate and bet gold on other players’ matches or play in a conquest mode with a regularly updated set of themed matches. At the time of writing we’re waiting for a day one patch to roll out before we can join the fray, but we’ll update this review as and when that happens..

The Wii U version also benefits from compatibility with Nintendo’s new Amiibo figures. We’ll cover these in a separate article, but you can create your own version of Mario, Bowser, Yoshi, Pikachu or whomever, train them up in fights against you, then unleash them against CPU characters or friends. Though in some ways we wish you could train and then play as your Amiibo, it still adds an extra way to enjoy the game, and it’s good to see that Nintendo has made them Amiibo an optional extra rather than an expensive but integral part of play. 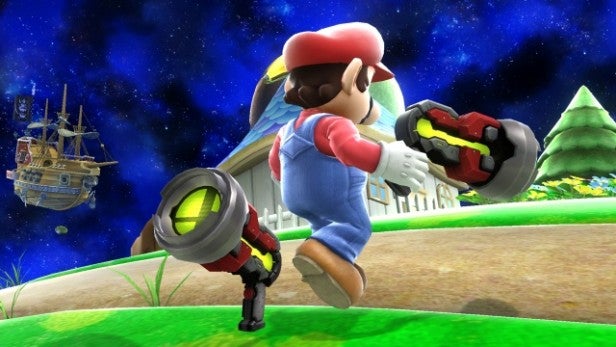 Graphically, Super Smash Bros proves once again that what the Wii U lacks in next-gen graphics horsepower, Nintendo can make up for through sheer craft. Each character is beautifully designed, lit and animated, to the extent that even Sega haven’t made Sonic look this good in years. The stages are packed with detail, not to mention spectacle as fights break out on wings flying over the Pilotwings/Wii Sports Resort island, or ascend ancient temples as the brawl continues. At times, the amount of stuff going on on the screen makes the action hard to follow, but then this is Super Smash Bros, not some clinical, combo-based fighting game. It’s meant to look like mayhem. It’s frantic because that’s more fun.

This is, without any question, the best version of Super Smash Bros. yet. With tighter controls and a bigger screen to work with, it’s much more consistently enjoyable than the 3DS version, while the wealth of available modes, characters and options puts it ahead of Super Smash Bros Melee and Super Smash Bros Brawl. It also packs in an eight-player brawl option, and while this can be horrendously confusing with a little too much zooming out for comfort, it also maxes out the mayhem.

In the past, we’ve seen Super Smash Bros as something of a niche concern, but this latest version makes us reconsider. With the right people it’s a superb party game, and even played solo it’s thoroughly entertaining. There’s still a steep learning curve, which Nintendo might want to think about easing, but once you’re in it’s furious fun for gamers, friends and family. Perhaps, it’s odd to describe a multiplayer punch-up as the most festive game this Christmas, but, somehow, Super Smash Bros fits the bill.

Verdict
The best version of Super Smash Bros yet, and another great reason to invest in a Wii U. It’s fast, frantic and furiously addictive, with enough game modes to satisfy solo players and one of the best local multiplayer experiences around. Even if you’ve not got Smash Bros before, this one might just change your mind.