Exclusive to Wii U
Bayonetta 2 is a glorious thrownback, taking us back to the days when the big Japanese studios ruled the gaming world, and games were less concerned with emotional narratives or visual realism than outrageous spectacle and satisfying gameplay. Even when Platinum and Sega unleashed the first game back in 2010 it felt closer to classic Capcom and – specifically – Devil May Cry than the grim, gritty all-action blockbusters of the era. Today it feels like a blast from the past, smashing its way through wave after wave of action-gaming mediocrity with glitz, glamour and a ridiculous amount of style.

On one level, it’s utter nonsense, not to mention camper than a Strictly Come Dancing Abba special presented by C3-PO and Alan Carr. Its star remains, as in the first game, one of gaming’s most intriguing heroines; a leather-clad, ass-kicking witch so ludicrously over-sexualised that you can only assume it’s tongue in cheek. 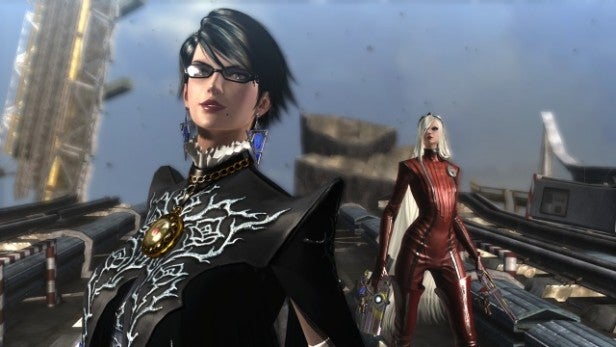 The storyline is such over-convoluted, incoherent tosh that even Capcom in its heyday might have thought twice about it. It’s incredibly foul-mouthed, and your sidekicks, clearly based on Larry Fishburn’s Morpheus and Joe Pesci’s, well, Joe Pesci, are played for crude shocks or equally crude laughs. Bayonetta 2 isn’t merely over the top – it’s floating in the stratosphere and waving down at the top from high above.

We’ll spare you the details of the premise. All you need to know is that Bayonetta is, as described, a leather clad witch of immense ass-kicking capabilities, and that she needs to enter Hell itself and kick some behind in the inferno. The only entrance to hell is concealed somewhere on a mountain, which stands behind a strange baroque city, and in her way stand the legions of heaven and hell. 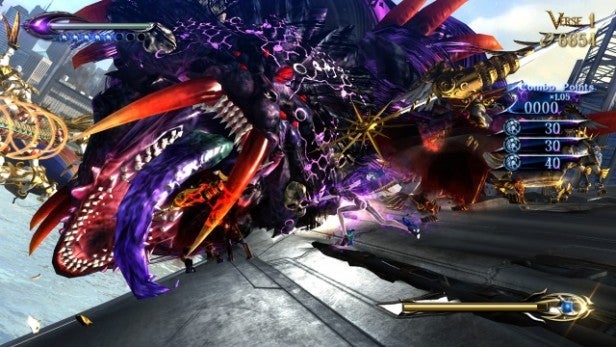 A less single-minded game might have had Bayonetta wandering the city and mountain, solving a few puzzles here, doing a little traversal there, while indulging in the odd spot of combat. Bayonetta 2 however, keeps its focus almost entirely on running and jumping in roughly one direction, and on brawling. First and foremost, it’s about opening a catering-sized can of whup-ass on an endless stream of beautifully designed enemies, which inevitably get bigger and/or nastier as each level nears its end.

It’s lucky, then, that the combat is so very, very good; simple in its basic principles, yet satisfyingly complex in its depths, and combining timing, combos, crowd control and strategy with a flair lesser brawlers only dream of. Bayonetta comes armed with both hand-to-hand attacks, a range of melee weapons and firearms, with the latter mounted in our heroine’s impractically high heels. She wields all of the above in dizzying flurries and extravagant combos, pausing only to dodge incoming attacks. 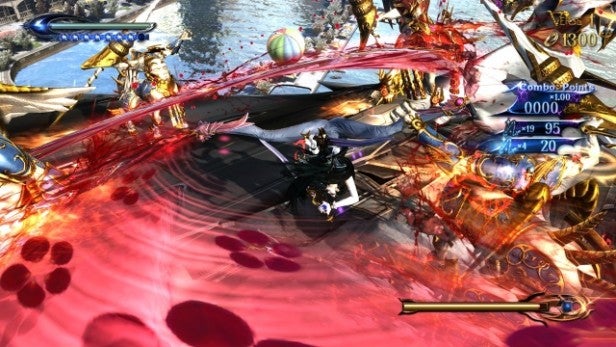 Dodge as near as you dare to the point of injury and Bayonetta enters ‘Witch Time’, freezing the enemy for a moment so that you can dish out extra damage to their defenseless bodies. Use Witch Time enough and you power up an ‘Umbran Climax’: a spectacular special attack featuring humungous weaves of hair, snarling demons, slavering hell-hounds and plenty of other things with the destructive potential to wipe out half of some huge varmint’s damage bar in seconds.

It’s utterly bonkers, but equally captivating, as you develop a feel for each enemy’s attack rhythms, balance your attacks and your dodges, then build towards your Umbran Climax, to be unleashed when you can strike decisive blows. It’s not that combat can’t be messy (it can) nor that you won’t resort to button-mashing (you will) but Bayonetta 2 rewards skill and concentration, and continually stretches both. Bayonetta herself grows more powerful, with discoverable health upgrades and new weapons, but if you don’t grow in skill to match, you still won’t make it through the game. 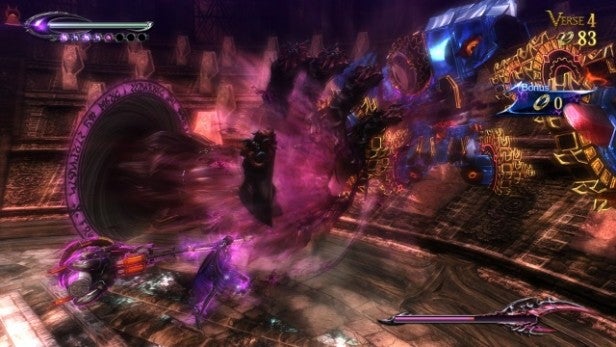 Weapons are unlocked through Rodin’s shop, where the fallen angel armorer/Morpheus-clone will also sell you items, accessories and new combos – labelled techniques. The shop is accessible from certain points within levels, plus from a shortcut in the level select menu before you start the next chapter, making it easy to grab some health items before you rejoin the fray. And Bayonetta 2 always makes the investment in new arms worthwhile. There might not be dozens of weapons, but the ones you get enable you to wreak havoc in an ever more overblown fashion.

The action, meanwhile, just gets more and more spectacular. This is a game that opens with an awesome sequence of battles in and over the streets of New York, then builds from there to take in running skirmishes up the side of a fantasy cathedral, a chase through hell and – at one pointt – what can only be described as a sci-fi Armageddon. And Bayonetta 2 loves its boss battles. In fact, the forces of heaven and hell seem to have promoted whole ranks of angels and demons to middle management just in order to give you more bosses and sub-bosses to fight. Just when you think you’ve seen ‘em all, another one comes along to prove you wrong.

See also: 10 game sequels we’d like to see on Xbox One and PS4 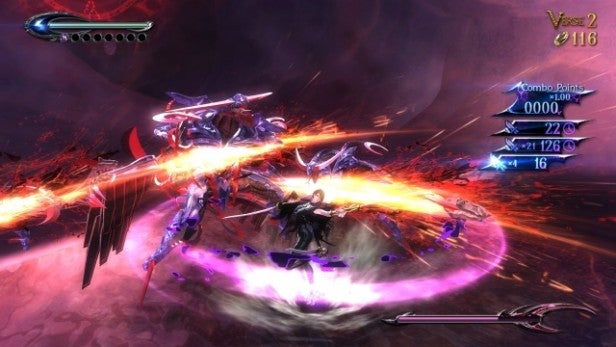 The visuals mark a new high point for Wii U. Doubtless Platinum and Nintendo have played to the system’s strengths, but there’s a sense of scale and artistry here that you’d be hard pressed to find in any game on Xbox One or PS4. The graphics aren’t photorealistic, but they’re fantastic in both senses of the word, blending Gaudi and gothic architecture with creature design that outdoes Capcom’s best. You’ll see games this year with more advanced surface effects, particle effects or lighting, but you might not see anything more regularly gob-smacking. It’s the Wii U’s God of War and God of War 2, rolled into one.

Eventually the tale will end, but the game won’t be finished with you yet. It’s full of secrets, collectibles and extras, many of which you’ll only discover after your first run through, not to mention an online co-op mode where you can fight waves of enemies together. There are dozens of combat challenges in the land of Muspelheim to complete as well, and it’s unlikely you’ll tackle all of these on the first run through. If you want depth and replay value, Bayonetta 2 has more of both than you might expect. 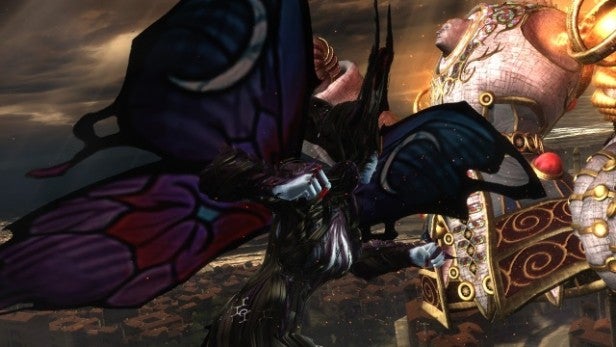 Serious criticisms of Bayonetta 2 are pretty few and far between. The camera goes awry from time to time, particularly in the major boss battles, and in a handful of really busy moments the frame rate falls apart – though not to massively impact play. Some bosses have a nasty way of spamming you with awkwardly-timed attacks, throwing up the odd difficulty spike here and there. The touch controls, designed to make the game more accessible, aren’t really fit for purpose in the latter stages of the campaign. Most seriously, it’s an incredibly linear game. You might spend the odd moment departing from the straight and narrow to search for bonus items, while there are sequences spent underwater or speeding on a mount, but much of the time it’s a one-track game.

Still, who cares? None of these failings will even occur to you while you’re staring at the screen, your eyeballs smacked around by the frenetic visuals while your reflexes struggle to maintain the pace. Bayonetta 2 is, above all else, hugely exciting and tremendously addictive. You might switch it on late at night just to play another chapter. Three hours later, you’ll wonder what the hell happened. Bayonetta 2 happened. That’s all you need to know.

Verdict
For once a long-awaited sequel is superior to the original game. Not content with being the best all-action blockbuster on Wii U, Bayonetta 2 is a high-water mark for the epic brawler as a genre, sitting right up there with Devil May Cry and God of War 2 in the pantheon of greats. It’s so ultra-violent, innuendo-packed and sweary that it’s hard to believe its running on Nintendo, but all credit to them and to the team at Platinum; the Wii U can boast another of the year’s finest games.