Exclusive to Nintendo Wii U

Few Nintendo games have been met by such a mixed reaction as The Legend of Zelda: The Wind Waker, and while those feelings don’t run as high now as they did ten years ago, that’s still the case today. Then the battle was between those who regarded The Wind Waker as a classic and those who hated the game’s bold cartoon style or thought all the sailing was a bore. Now it’s between those who see this remake as a confirmation of the game’s classic status, and those who will see it as a missed opportunity. We’ll admit to a certain amount of disappointment at what The Wind Waker HD fails to deliver, but it’s hard to feel too cross when what we’ve got is still so richly lovable, so sweeping, so exuberant. 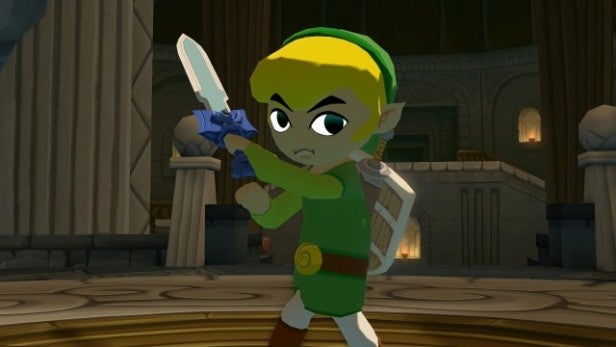 Part of The Wind Waker’s problem was that it followed on from The Legend of Zelda: Ocarina of Time – still a popular contender for the best game ever title – and Majora’s Mask, the unconventional, underground classic of the series. Expectations were ludicrously high when the game was announced, and some fans just couldn’t stand what they saw as a kiddie-friendly cartoon – though you have to wonder what they were expecting. The other part was that it came out feeling ever-so-slightly unfinished. We know that dungeons were removed during development, and an unnecessary fetch quest towards the end felt suspiciously like padding.
The good news? That notorious fetch quest has been fixed so that you won’t spend hours on end completing it. The bad news? This is an HD update rather than an extended cut. Those missing dungeons have not been reinstated and there’s precious little brand new content in the game. To this we’ll shed a single tear. Boo hoo. 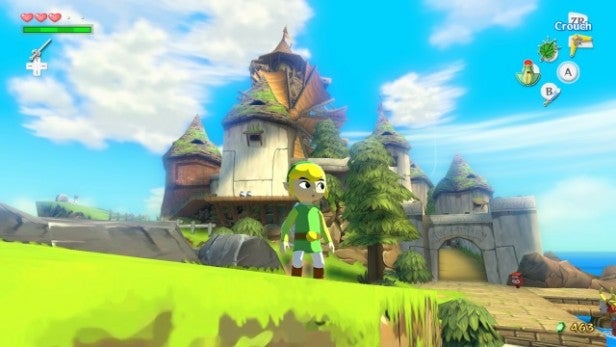 The Wind Waker HD is interesting in that it’s one of the few Zelda games that explicitly links through to earlier games, though we wouldn’t want to spoil exactly how. Where other Zelda games are predominantly land-based, it takes a sea-going approach, putting your elfin hero, Link, on an island in the middle of an ocean, with the towns and settlements of previous Zeldas replaced by other islands, and Link’s horse, Epona, switched for a magic talking boat, The King of Red Dragons. It’s basically an island-hopping odyssey, though a little less violent and more cutesy than your average Greek myth.
Structurally, it’s a classic Zelda. You’re on a quest to rescue your sister and save the land from an evil sorcerer. To do so you must explore the open world, gaining entry to a series of dungeons and collecting several items of mysterious power. In each dungeon you’ll also find a new tool or weapon, which will be used both to reach new areas of the dungeon and – invariably – fight a final boss. As with every Zelda the joy lies both in repetition – all the stuff that stays the same from title to title – and variation: the new tools, monsters, mechanisms, themes and gadgets that the game uses to delight and confound. 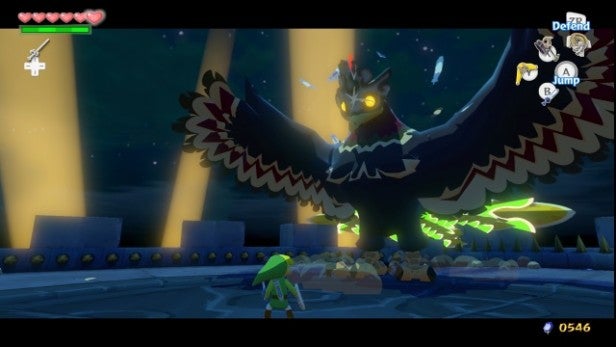 If we were feeling picky we’d note that the dungeons in The Wind Waker HD aren’t the strongest in the series. Some of the later efforts are fantastic, but The Forbidden Forest – a woodland level full of wind-powered mechanisms and Link-spitting plants – can be overly finicky, and most aren’t as imaginative or ingeniously paced as The Water Temple and Jabu Jabu’s belly in Ocarina of Time, or The City in the Sky and The Goron Mines in The Twilight Princess.

Yet it doesn’t seem to matter with The Wind Waker because it’s such a coherent and engaging piece of work. Each section seems to flow on into the next, making it incredibly hard to put down. And even if you played it on its first outing, you’ll be surprised how much you’ll have forgotten from your first visit, and how enjoyable a second outing is.

Between the dungeons, you have some of the most weird and wonderful places and people of the series, from the cheeky nippers and crazed game-operators of Windfall Island to the inept pirates to the elderly gent you’ll find looking through his telescope at interesting spots around the great sea.

There’s certainly no shortage of eccentric characters to meet or strange new places to explore. Some fans feel that the world of The Wind Waker isn’t as interesting as the world of Ocarina of Time, but the more you play, the more you realise that they’re wrong. Whether you’re looking to salvage sunken treasure, deliver the post or find secret caves, there’s plenty here to keep you exploring for a long, long time. 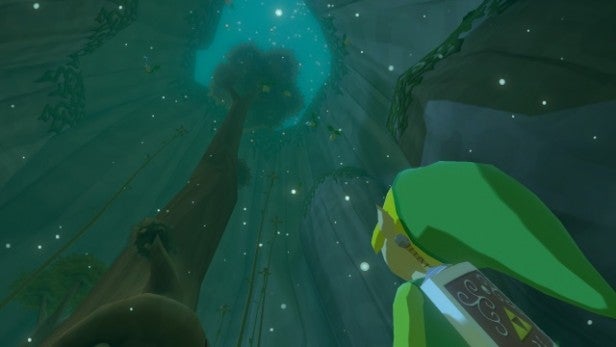 Weapons, tools and gadgets are a key part of the series, and The Wind Waker has some of the most enjoyable. Old favourites like the bow, bombs and boomerang return, along with the iron boots, hookshot and the hammer. However they’re joined by the grappling hook – used to grapple and then swing from certain poles, beams and branches – and by the deku leaf, which allows you to flap gusts of wind to start mechanisms and stun enemies. Most obviously, you get the Wind Waker itself, a baton that empowers you to control the direction of the wind. All are used in a range of clever ways that make The Wind Waker a journey of discovery. As in any great adventure, wit and cunning are just as important as a mighty sword arm.
One of the other old complaints about The Wind Waker was that the sailing could be a bit of a chore, even with the addition of a quick-travel system later in the game. Nintendo has listened, and the remake gets the option of a high-speed sail that comes with its own built-in wind supply, and the result is a game where you can now zip along from place to place.

A huge part of the pleasure of The Wind Waker is in the exploration – in taking to the seas, stopping to get tips and chart updates from the local talking fish and then finding out what each outpost or island has to offer. The new version doesn’t change this, but it does cut down on the time spent drifting around. 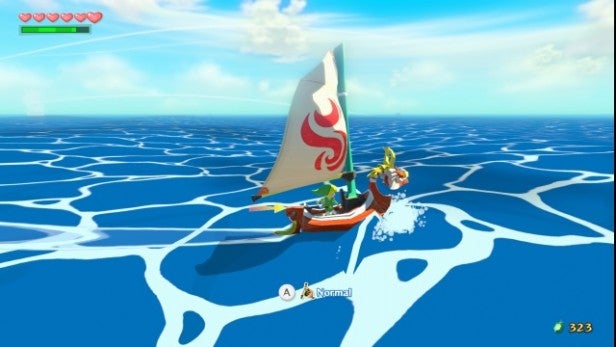 Any new grumbles are minor. There are some odd collision detection glitches that see characters or monsters walk partly through certain objects, most noticeably when the pig-like guards are inspecting barrels in the Forbidden Fortress level early-on. A few dungeon mechanisms are needlessly fiddly, making a few sections frustrating, and while Nintendo has always been clever about introducing shortcuts into dungeons so that, when you die, you don’t have to do too much to get back to where you were, there can still be a fair bit of backtracking. Some might grumble that there’s not much use made of the Wii U gamepad, but it does a great job of maps and inventory management, and being able to play the game on the pad screen rather than the TV is a real plus. This isn’t a game you’ll want interrupted.
One thing that The Wind Waker HD confirms is that the style of the original was a triumph, whatever the naysayers might suggest. With the graphics upscaled, sparingly and subtly retextured and treated with a new lighting engine and plenty of bloom, this game really doesn’t look like it’s a decade old. The environments are full of strong colours and bold visual flourishes.

There’s so much detail in the animation – and particularly in Link’s responsive face – that you’re hit by how brilliantly the whole thing works, and how badly other cartoon-style games released since compare. Rather than childish, The Wind Waker now looks iconic, and while some might prefer the more ‘grown-up’ style of subsequent console Zeldas, we’d argue that this incarnation is the best. 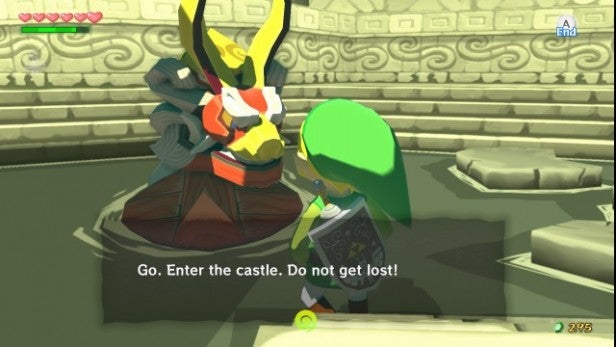 If the graphics now look even better, then the sound has barely aged. The Wind Waker HD has a fantastic score, and is another great demonstration of Nintendo’s knack for using music and effects to build atmosphere, deliver cues and signify success or danger. The instruments might sound electronic, but it doesn’t make the soundtrack any less rousing. It helps The Wind Waker HD reach a cinematic level that subsequent Zeldas haven’t quite reached.

Beautiful to look at and brilliant to play, The Wind Waker HD takes the most underrated Zelda and hangs it high in Nintendo’s gallery of greats. It is a disappointment that it doesn’t return deleted content or extend the experience, but this is a game that will still keep you enthralled for many hours, each one filled with tension, thrills and wonder. It’s an essential buy for anyone with a Wii U, whether or not you played The Wind Waker first time around.