What is the Sony Xperia L?

The Sony Xperia L is a 4.3-inch Android phone that’s available in white, black and red. It’s a smaller, cheaper sibling to the Sony Xperia Z that, at £250 on a SIM-free basis, lies between mid-market and budget phones.

It costs about the same as the outstanding Google Nexus 4 and is the cheapest addition to the latest Sony Xperia line, sitting under the £300 Sony Xperia SP. It runs on a 1GHz dual-core processor with 1GB of RAM, and has an 8MP camera with an LED flash. As with many modern phones, it includes NFC (Near Field Communication).

Can the Sony Xperia L possibly live up to the highs of the Nexus 4? Read on to find out.

The Sony Xperia L design is more akin to past Xperia-branded phones, like the Sony Xperia J and Sony Xperia T, than the latest high-end likes of the Sony Xperia Z.  It’s easy on the eye and relatively svelte, despite the considerable border around the screen, and at just 9.7mm thick and 137g in weight it’s only marginally heavier than the market leading Samsung Galaxy S4. It’s just a shame it doesn’t feel anything like as nice.

Its arched back and plastic construction is neither particularly comfortable in the hand, nor reassuringly strong. Indeed, the back cover on the Sony Xperia L is inexcusably flimsy. It bends out of shape easily when removed and its low-grade construction means it can be hard to create a strong seal around the phone’s rear. 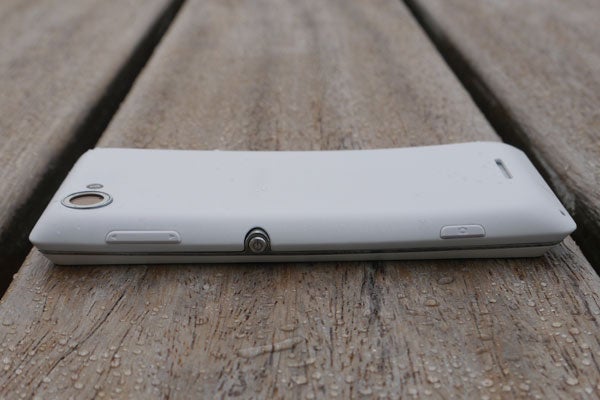 The Xperia L’s curved rear feels nice in the hand, but it’s let down by sharp, severe corners. The fact all three physical buttons (power, camera and volume) are on the right edge doesn’t help, either, as (when held in your right hand) there’s no point where a button isn’t digging into your palm. Relocating the power button to the top or left edges would make the Xperia L more comfortable to hold and easier to use.

None of these issues are fatal and the Sony Xperia L is by no means the worst designed phone on the market. In fact, some parts, such as the notification LED that alerts you to low battery (red), waiting messages (white) and charging (blue) statuses, are thoughtful and smart. But, taken as a whole, the Sony Xperia L’s design isn’t a patch on its most direct rival, the Google Nexus 4. 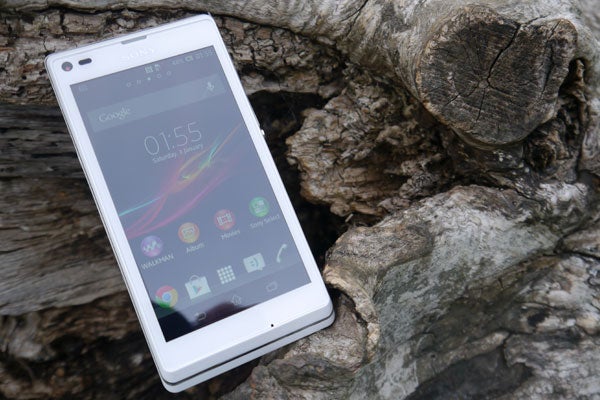 Neither is the screen. The Sony Xperia L’s screen is bright but not quite the sharpest on offer at a £250 price point. Its 4.3-inch touchscreen has an 854 x 480 pixel resolution, which equates to 228 pixels-per-inch (ppi).

That’s slightly less than the Google Nexus 4’s 318ppi, which means images on the Sony Xperia L’s screen aren’t quite as sharp or well-defined. App icons are a prime example of this as their rounded edges appear slightly blocky rather than perfectly smooth.

For the price, however, the Sony Xperia L’s screen is more than passable. Shots taken using the camera look far more colourful and vibrant than on lower-end handsets, and web pages look good even if the text isn’t as sharp as on the Nexus 4. It’s in a completely different class to the dull, lifeless screen on the £150 Samsung Galaxy Fame.

The responsiveness of the Sony Xperia L’s screen is second-to-none, too. Scrolling through menus and settings screens is a simple, lag-free affair. The Xperia L’s screen is also strong in bright, direct sunlight, and the auto brightness responds quickly to changing conditions.

The scratch resistant coating on the Sony Xperia L screen does its job too, showing no wear after a week’s use, even when carried in a pocket with coins and keys.