Having fallen slightly by the wayside in the recent smartphone stakes, Sony is back with its biggest and best handset to date, the 5-inch Sony Xperia Z.

Want to save time and see the phone up close in the process? Watch our video review below, which shows the Xperia Z’s waterproofing in action.

On paper a true rival to the likes of the Samsung Galaxy S3, Google Nexus 4 and iPhone 5, the Sony Xperia Z runs Google’s Android 4.1.2 Jelly Bean OS from the box – although a 4.2 update is already on the cards. Pairing a selection of premium innards with a raft of new, consumer appeasing features, the handset plays host to the likes of an IP57 waterproof coating.

Officially unveiled back at CES 2013 ahead of a late February launch, the ‘Z’ hits the high notes on all fronts, with the Sony Xperia Z specs sheet boasting a veritable what’s-what of high-end innards.

Kicking things off with a 1.5GHz quad-core Qualcomm processor, the Xperia Z’s zippy CPU is matched up with 2GB of RAM and 16GB of internal storage, creating a base setup to rival any Android device on the market. Adding a 13.1-megapixel rear-mounted camera, a 2330mAh Lithium-Ion battery and integrated NFC connectivity options, and the Sony Xperia Z quickly stands out as a leader of the smartphone scene.

Despite the handset measuring in at a superbly svelte 7.9mm thick, the Sony Xperia Z screen is an expansive and vibrant 5-inch 1080p Full HD affair, one which benefits from a shatter and scratch resistant coating, 10 finger multitouch compatibility and an inbuilt light sensor.

With a premium price tag to match the premium components, the Sony Xperia Z is available from a selection of leading UK network providers and smartphone retailers, including the likes of Vodafone who are offering the device for free when tied to a £42 per month, 24 month contract. For those not wanting to tether themselves to a two year deal, one that will set them back a hefty £1,008 during that time, the Sony Xperia Z is also available on a SIM-free or PAYG basis from £549.99. 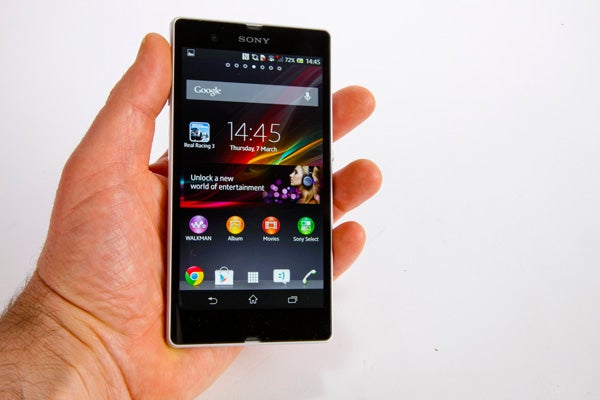 Highlighting Sony’s renewed efforts on the smartphone scene, the Sony Xperia Z is one of the most visually impressive handsets on the market today, with the device’s expansive 5-inch Full HD display encased by a sleek, narrow bezelled design that screams of quality. Making the handset more appealing to all manner of personal tastes, the device is available in black, white and purple colour schemes.

With a glass backed finish, similar to that of the iPhone 4S or Google Nexus 4, the Sony Xperia Z design sees the high-end manufacturing components held together by a minimalist, soft-touch rubber edging, a feature that, whilst maintaining a compact classy appeal, also helps protect the device from inevitable knocks, drops and bumps.

However, as attractive as the Sony Xperia Z design might be out of the box, within minutes of use the device looks like a scruffy smearing pot of greasy fingerprints and unappealing grime marks. Dramatically exaggerated by the glass rear and expansive 5-inch touchscreen display, the handset is hard to keep in an aesthetically pleasing manner, quickly reverting to excessively smeared after frequent wipe downs. What’s more, thanks to its glass-backed design, the Sony Xperia Z is prone to sliding of all but the flattest of surfaces, an issue only marginally rectified by the slight overhang of the rubberised edging.

Despite its IP57 certification, a rating that sees the handset capable of being submerged in up to 1 metre of water for 30 minutes at a time with no damaging effects, the Sony Xperia Z, like many self-titled ‘rugged’ or ‘lifeproof’ phones, does not suffer from the same aesthetics depleting design issues.

Having run the device under a tap, plunged it into a washing-up bowl and even made a call from the shower, we can safely say that the Sony Xperia Z waterproof credentials live up to their billing, leaving the handset in need of just a simple wipe down before going about its day-to-day tasks. Aiding this IP57 rating, all the handset’s ports are covered by hinged protective caps, tethered to the handset by sturdy plastic connections, components which offer more reassurance and a longer expected lifespan than those featured on some rival devices. Helping further ensure against water damage, the handset alerts you if these ports are left open.

Although the 5-inch form factor feels sizeable within the hand, thanks to the device’s slim line design, it is by no means overpowering, presenting a largely comfortable user experience when grasped in either a left or right handed manner.

One area where the Sony Xperia Z design could be improved, however, is in its button placement. Featuring just two physical controls – the customary power/sleep button and a volume rocker – both buttons are located in the middle of the device’s right hand side, a positioning that saw a stray finger accidentally toggle the volume setting on all too frequent a basis. 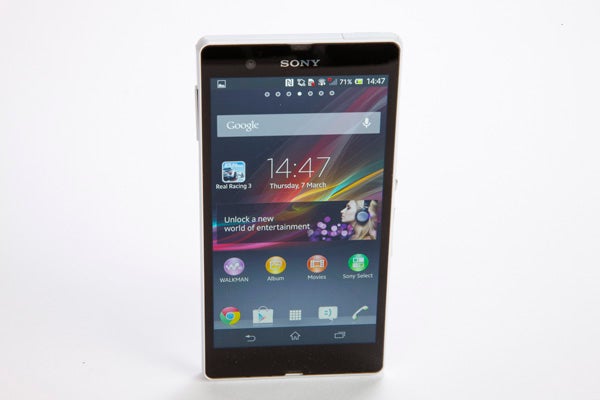 One of the handset’s key selling points, the Sony Xperia Z screen is a bright, vibrant and expansive delight, offering pin-sharp detail to images whilst making video playback an immersive joy.

With fluid, fuss-free screen transitions, the display found on the Sony Xperia Z helps create a more natural and engaging user experience, with tasks such as skipping between homescreens, scrolling through menus and browsing across web pages all handled with aplomb and not even the slightest hint of trouble.

Dwarfing the likes of the 4-inch iPhone 5 and seemingly set to line up parallel to the upcoming Samsung Galaxy S4, the 5-inch nature of the Sony Xperia Z screen sees the handset further blurring the lines between smartphone and tablet devices, just about fitting in a trouser pocket whilst still offering copious amounts of on-screen real estate. 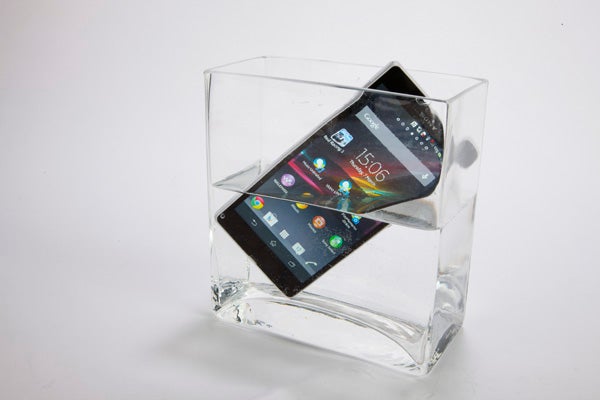 Although the handset’s viewing angles are strong, they are not quite the best on the market, dulling brightness and muting colours when viewed from an extremely acute angle. In truth, however, this is an issue which will have little effect on day-to-day usage of the device.

Standing up to performance depleting glare quite well, the Sony Xperia Z screen is coated it a protective shatter proof and scratch-resistant coating, a feature that stood up well to being placed in a pockets with loose change for a couple of days. With an inbuilt light sensor, the Z’s display coped well with jumping between areas of shade and direct sunlight, quickly attuning the handset’s brightness levels to best handle the surrounding elements.

Perfect for movie playback and app-based gaming, the full HD display brings content to life with movies downloaded from the Google Play Store packing more visual punch than on rival handsets. On top of this, games such as Real Racing 3 are accompanied by virtually no motion blur or degrading faults and stutters.

As impressive as the 5-inch Full HD Sony Xperia Z screen is, it does have one major drawback, the monumental drain it has on the handset’s 2330mAh battery reserves, an issue that we will fully address later.