What is the Sony SmartBand Talk SWR30?

The SmartBand Talk is Sony’s latest wearable tracker, following in the footsteps of the original Sony SmartBand. It tracks more than most, however, as it records how much time you spend listening to music, reading, snapping photos, browsing photos and more, in addition to standard tracking fare such as walking, running and sleeping.

It’s a concept that will no doubt appeal to many, and the ability to make and take phone calls through the SmartBand Talk sets it apart from most rival devices. But tracking issues and the lack of useful analysis let it down. The £125 Jawbone UP24 is similarly priced but better value for money. 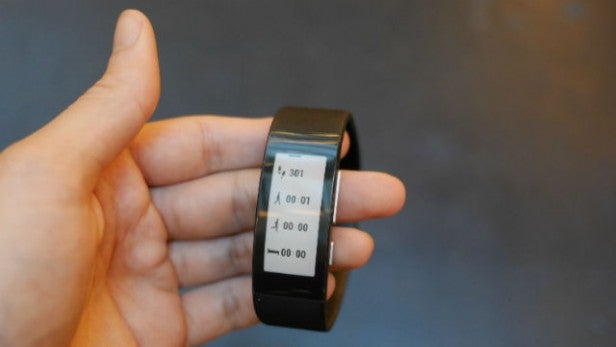 Sony can teach a few companies a thing or two about design. The SmartBand Talk is simple and clean looking. It isn’t beautiful, but there’s a certain minimalist elegance here that rival devices, such as the Misfit Flash and Withings Pulse O2, lack.

The SmartBand Talk consists of a plastic ‘core’ attached to a rubbery wrist strap. The main body comes in two colour variations: black and white. We tested the black version and reckon it’s the more attractive of the two – it’s more discreet.

There’s a decent selection of removable straps available, too, with red, pink, blue, green, white and black variants on offer in two different sizes. The little grooves on the straps are unfortunately prone to picking up dirt, though, which is all too visible and quite difficult to dislodge.

The core weighs just 24g and is slightly curved, so it feels really comfortable on your wrist, whether you’re resting, exercising or sleeping. The 1.4-inch E-ink display has a 296 x 128 resolution and is easy to read in daylight, but lacks a backlight, so night-time use is tough. Because it has an IP68 rating for ruggedness, you don’t have to worry about treating it with kid gloves. You can shower with it, drop it 1.5m into water, or even dunk it into a mud bath, if you’re into that sort of thing. Probably best not to go swimming with it, though. 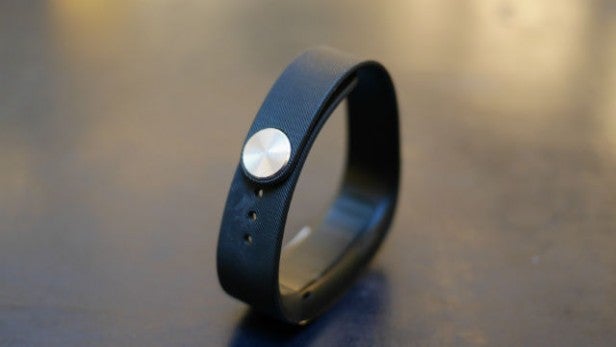 On the right-hand edge of the main body are two buttons. One controls volume and the other lets you navigate from screen to screen. On the opposite edge is a Micro USB charging port. The display itself is touch-sensitive. It requires satisfying whacks rather than gentle presses, but only a couple of features are operated in this manner.

As this is predominantly a fitness tracker, there’s an accelerometer and an altimeter built in, which track movement and elevation respectively. Unfortunately, this movement is limited to walking and running – you can’t specify whether you’re cycling or swimming, which is a shame.

The screen brings up a basic but satisfactory amount of information, including the time, how many steps you’ve taken, the amount of time you’ve spent walking, running and sleeping or the day and battery life. You have the option to connect several apps with the SmartBand Talk, too, such as the ability to make phone calls, read messages, set ‘life bookmarks’ and control music playlists. 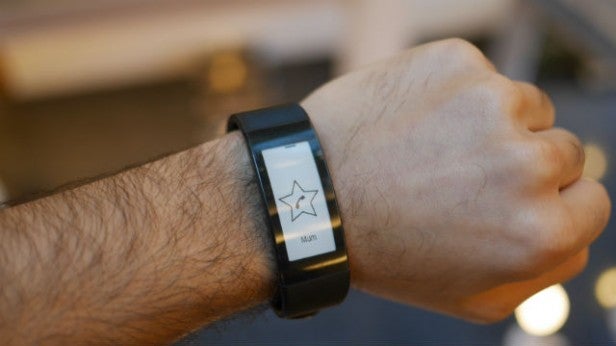 The vibrate function can be enabled so it buzzes when your alarm goes off, if you hit a daily target or receive a call or message. It’s strong enough to grab your attention but gentle enough that it doesn’t shock you into spilling whatever you’re holding everywhere.