What is the Misfit Flash?

The Misfit Flash is the activity tracker follow-up to the Misfit Shine, arguably one of the most elegant ways to monitor step count, sleep and even dips in the pool. At £50, it’s half the price of Misfit’s first tracker and offers all of the same great features, including a six-month battery life, a fully waterproof design and the ability to track multiple activities.

Why is it cheaper? Well, this time Misfit has dropped the all-metal design in favour of plastic. It’s not really a surprise, given that more affordable wearables, such as the $13 Xiaomi fitness band, are making the market more competitive. It still delivers data in a comprehensive and effortless way, but it’s what happens with that data that makes the Flash a tough sell for someone trying to make drastic changes in their day-to-day life. 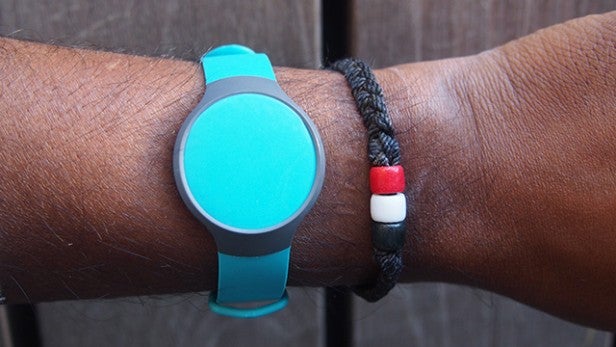 We’ve already mentioned the big change with the Flash when you put it alongside the Shine. The all-metal disc has been replaced with a similarly sized plastic one. Plastic next to metal is nearly always going to finish second best, yet while it’s disappointing to see Misfit go down this route, the Flash carries its cheaper materials well.

The Flash is water resistant, but the rating’s reduced to 30m from the Shine’s 50m. That still covers fresh and saltwater, which isn’t something you always find with so-called ‘waterproof’ wearables.

It’s roughly the same size as the Shine, although slightly thicker with flatter edges, to fit more securely inside its thin, plastic wristband – and that’s an important factor here. Having lost two of the Shines in the past with the tracker falling out, we were grateful for the thicker lip on the wristband around where the tracker sits in place, helping keep it more securely in place. Having to fit the the tracker from the bottom of the band instead of the top certainly helps as well. We didn’t have the same concerns with the Flash as we did with the Shine. 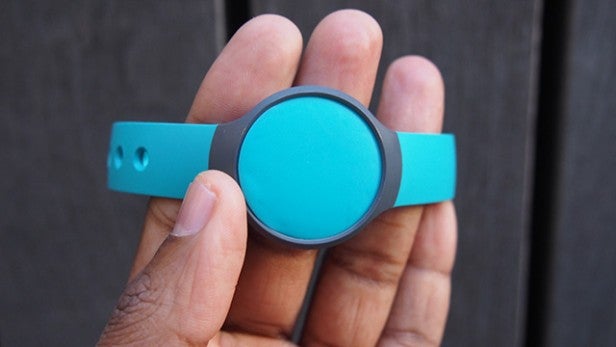 The battery’s much easier to remove and replace on the Flash. There’s no need to worry about digging those fingernails in or using the small tool included in the box to prise it open. The bottom of the circular tracker can effortlessly be removed to display the small compartment for the small button-cell battery.

You still have the same versatile wearing options, but if you opt for placing it around your wrist, it’s both light and comfortable, not at all bulky.

Activating the Flash, gone are the gentle taps needed with the Shine, with more purposeful presses now required. It’s not as fiddly as the Shine and is a more responsive way to quickly monitor progress. It also makes it easier to tag activities by pressing the button before and after a session. 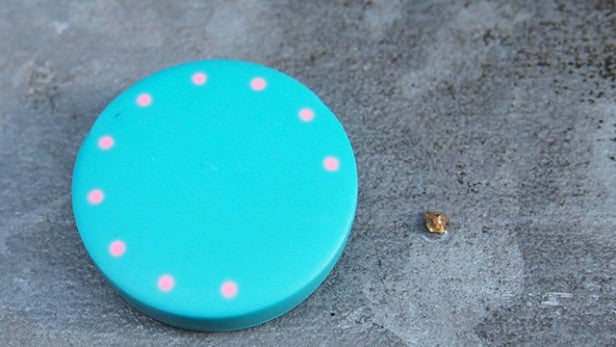 It’s still based around the same simplistic dotted LED display, which can switch between giving you an indication of progress and telling the time in the same slightly unconventional way. Those white lights are now replaced with a series of brighter red ones, which makes it easier to read the display.

The Shine had a small icon on the back to indicate which way the tracker should be positioned in the strap for it to be used as a watch, but annoyingly that’s not made it on to the Shine. So if you have to remove the tracker from the wristband, you may not instantly be able to work out which dot indicates 12 o’clock.

With no screen, and only a basic visual indication of how you’re progressing towards your daily goals, viewing data is still largely done on the Misfit app. It’s available free for Android and iOS and while it doesn’t look entirely different at first glance, there have been some changes that make it a little more comprehensive without breaking up an otherwise clean and easy-to-navigate user interface.

Syncing data from the Flash to a smartphone is done over Bluetooth 4.0, making it extremely easy to set up, as is the case with the Shine. You still have the dropdown menu tucked up in the top left corner, where you can view and set goals such as hitting a certain number of points, and will calculate which activities you’ll have to do to meet your goals. So, if you want to hit 1000 points, that equates to a 1.5-hour walk, a 30-minute run or a 45-minute swim. The same can also be done for sleep and weight tracking. 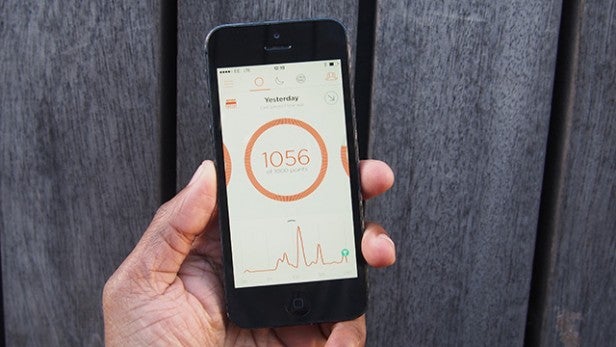 Additionally, you can adjust profile information, monitor multiple synced Misfit devices and adjust where you wear the device to improve the tracking algorithms. As in most cases, wearing it around your feet is more reliable.

Most of your time will be spent inside the main screen, where you can view the day’s points total inside the circular icon, giving you an indication of how much more activity you need to carry out to hit your goal. A single press also shows steps, calories and distance covered.

The little plus sign lets you add activities or begin tracking for individual tasks. Yoga and dancing have been added to the activity roster, letting you choose whether you worked at a mild, moderate or intense level. 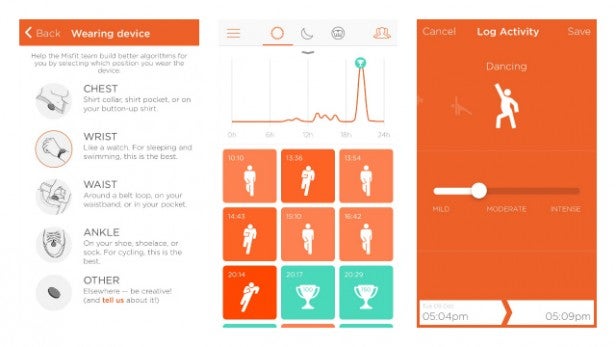 Down below is an indication of which are your most productive parts of the day, broken down by activity using easy-to-read icons when you’ve snagged a trophy or been out for a run.

For sleep tracking, hit the crescent moon, after which the screen turns a purple shade and will tell you quite concisely how close you were to hitting your sleep goal. You can manually add sleep tracking, but the good news is that the Flash automatically tracks sleep. The last section is dedicated to weight tracking, where you can manually input your weight goal.

You’ll still be able to set goals, view progress and irritate friends with updates through Facebook. There’s new food tracking and third-party app support here, too, so you can use the likes of Lose It! to track weight, plus apps such as Runkeeper and MapMyFitness to track and upload runs. 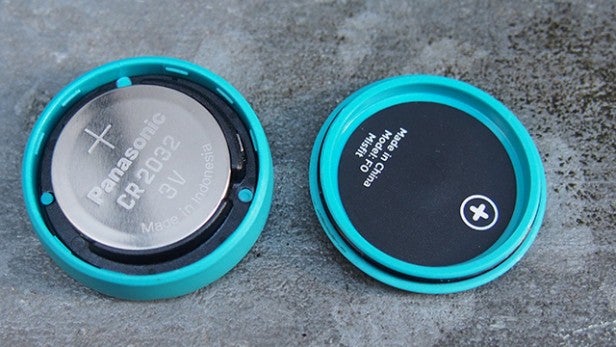 From an accuracy perspective, we tested the Flash against the Jawbone UP24 and both wrist-worn trackers served up similar results for steps, distance and sleep tracking. Again, this type of activity tracker isn’t as accurate as it would be wearing it nearer to your feet, so if you’re a runner you wouldn’t want to use this as a way to train for races. It’s definitely something for more casual tracking. Both Jawbone and Misfit apps break down key moments of movement during the day, but Jawbone does it in more detailed way. 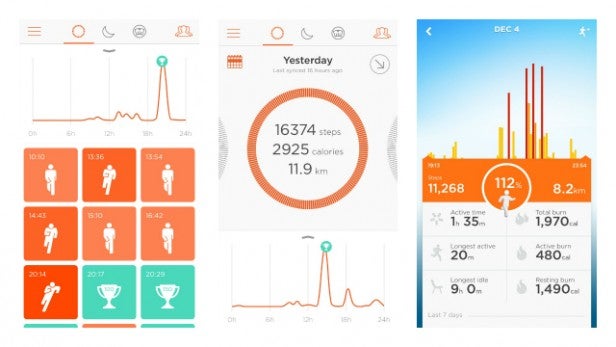 Misfit app compared to the Jawbone UP24 app (far right) 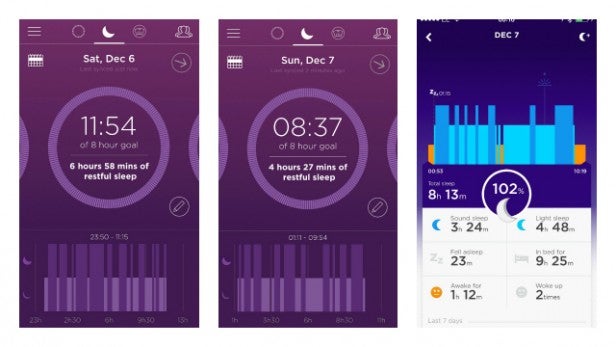 Sleep tracking seems to throw out different results as well. Unlike the Jawbone, where you need to hit a button on the tracker to activate it, the Flash senses when you’re asleep and awake. There’s some clear incosistencies in the data, such as the amount of restful sleep and a 20-minute difference in terms of the time slept. We’re by no means saying that the Jawbone is at all perfect, but there’s always going to be questions over a tracker that tries to work out when you’re hitting the hay.

Whether the Flash actually changed the way we approached each day, we’re not really convinced. The problem with activity trackers like the Flash is that, while it can overload you with data and put it all in a nice, pretty app, there’s isn’t enough of a motivational push to keep you using it. There’s no vibration motor to tell you haven’t been moving for an hour, or even any phone notifications to give you a nudge to hit those goals on a daily basis.

The data isn’t really put into any sort of context either – something that Jawbone’s and Fitbit’s trackers do such a good job of. If you don’t sleep enough, there’s isn’t really any advice to improve things. The Flash isn’t the only tracker out there that doesn’t really make a big enough deal about this.

One thing you can rely on with the Misfit Flash is battery life. It uses a CR2032 button cell, which is commonly found inside most analogue watches and you can grab a pack of five from Amazon for around £3, so it’s nice and cheap to replace. You won’t have to worry about it for six months, comfortably beating most other trackers for battery, plus you don’t have to worry about carrying around a separate proprietary charger. 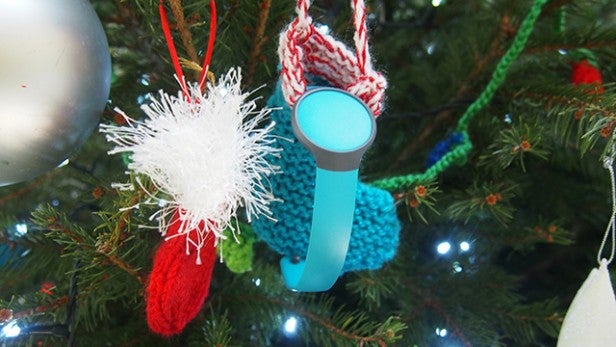 Should I buy the Misfit Flash?

For £50, the Misfit Flash delivers more features than activity trackers more than double the price. It’s waterproof so you can wear it all the time, and while the change in materials means it lacks the elegance of the Shine, it addresses a key design issue that made the first Misfit tracker rather too easy to lose. Its battery life wipes the floor with most trackers as well.

As a means to make changes to your daily lifestyle, we found the Flash to be lacking. While it effortlessly tracks all of your data, there’s not enough analysis here to make it rewarding, and there’s no real incentive to wear it all the time.

If you can afford to spend more, we’d still opt for our 2014 Wearable of the Year the Jawbone UP24, which can be bought for around the £80 mark. The Fitbit Flex might be a little older now, and doesn’t match the Shine for battery, but it can be bought for around £60 and has an ecosystem that does a much better job of helping you make serious changes to your lifestyle.

The Misfit Flash is feature-packed and one of the cheapest ways to track your day, but it needs to do more with the data it collects for it to be a worthwhile purchase.