What is the Jawbone UP24?

The Jawbone UP24 is the Jambox-maker’s second wrist worn activity tracker aiming to whip you into shape whether that’s pushing you to do more exercise, eat healthier food or get a good night’s sleep.

Set to live alongside the Jawbone UP which is now priced at £100, for an extra £25 the UP24 now adds Bluetooth Smart syncing with iPhones and Android phones so you can view data in real-time.

The Jawbone UP was not without its issues when it launched back in 2011 and with the likes of Samsung, LG and Sony now trying to tap into the fitness tracking movement, is there enough of an improvement to make the upgrade to the UP24? We slapped it around the wrist to find out.

Watch our video on the Key Features of the Jawbone UP24

Aesthetically, the original Jawbone UP is still one of the sleekest and most stylish bands around so it’s no surprise to see that the UP24 doesn’t get a drastic design overhaul. It’s still made from a textured rubber but now has a swirled pattern design where the ends snake over each other to create the grip around the wrist. Jawbone says it has used a hypoallergenic and medical-grade rubber so you shouldn’t, in theory, encounter any Fitbit Force-like skin irritation issues.

It still comes in three sizes small (19g), medium (22g) and large (23g) making it lighter than the smallest version of the Fuelband SE (27g). Bending the band and submerging it in water are still off limits as well so it’s clear that the insides of the UP24 have largely remained the same.

On one end of the band you’ll find the syncing button to set up a Bluetooth connection and switch between day and sleep tracking. Jawbone is still resisting on including a built-in screen so once again you’ll need to rely on your smartphone for a quick review of data collected. Jawbone does include two single green LEDs that light up with either a little crescent moon or flower icon to indicate the tracking state. 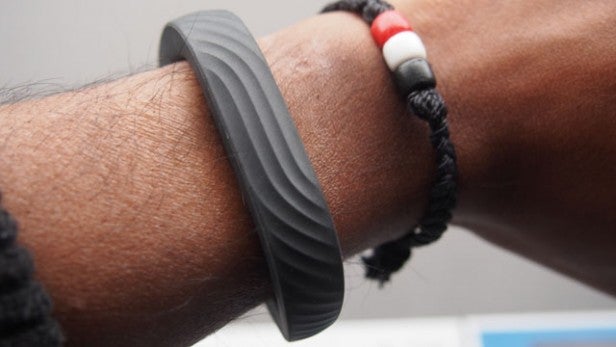 The other end of the band hosts a cap that hides away the 2.5mm charging connector. This does unfortunately mean you are stuck with Jawbone’s headphone jack-style USB cable to power up the UP24, rather than a more universal alternative. Unlike its predecessor, though, the cap definitely feels altogether more secure and less likely to fling off.

It’s now only available in either orange or charcoal black colours but it remains one of the slimmest and most unobtrusive bands to wear during the day and at night. It doesn’t shout ‘fitness tracker’ in the same way that the Nike Fuelband SE, the Fitbit Force or Fitbit Flex do, and for some people who want to keep tracking more discreet it definitely has that appeal.

Tracking all of the data is done via the Tri-axis accelerometer, technology that’s similarly found in the Nike Fuelband and the Fitbit trackers. The biggest change of course is Bluetooth Smart syncing. The benefits of having the newest Bluetooth standard support on board is the ability to exchange data in real-time without draining the battery life on your smartphone. It also means you don’t have to plug the band into a computer to sync the data.

That data is still focused on the step counting information that a standard pedometer records and sleep tracking with a new sleep recovery mode as back up when you forget to sync. You can also log food consumption and workouts to build a more comprehensive view of your day. There’s a lot of data to take in so the aim of the Jawbone ecosystem is to make better sense of that data.

One of way of doing this is by using Jawbone’s Insight engine. Perhaps the most intriguing of the new software tweaks, the company has invested in a data science team to analyse personal data and make recommendations to improve step count and sleep time. These recommendations come in the form of little information cards that appear in your UP news stream after data has been collected for at least four to five days. 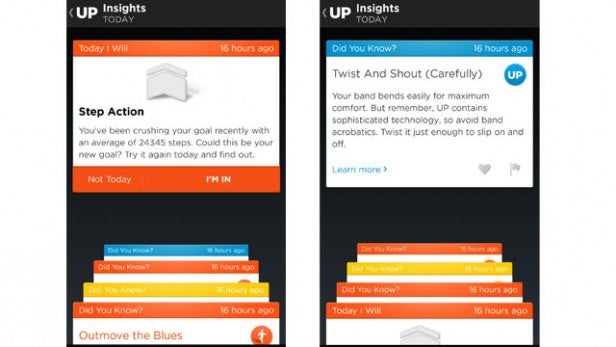 Jawbone also sends out an email every Monday giving you a summary of the previous week’s step and sleep averages. At the bottom of the summaries we were reminded that good sleep requires a dark room and to think small about making improvements whether it’s going to sleep 30 minutes earlier or walking when taking phone calls. All reasonably sound advice but not entirely what we would call tailored information.

You don’t have to rely on Jawbone’s suggestions to decide to take action. There’s plenty of new software additions to take more a proactive attitude towards improvement. The pick of the bunch is the new ‘Today I Will’ feature that makes you promise to sleep, move or drink more water.

If you are struggling to keep track of all the activities you promised to – like getting ready for bed earlier, going for that run or you’ve been inactive for too long – you can get a nudge by setting up alerts and reminders. These can either be through phone notifications or sending a vibrating buzz on the band.