What is the Sony SmartBand SWR10?

The Sony SmartBand is a wrist-worn activity tracker that not only wants to monitor your fitness but also log every other aspect of your life. Whether it’s how much you check in on Facebook or the amount of photos you snap on a daily basis, Sony wants you to be able to record it.

Priced at £80, it’s up against affordable trackers like the Fitbit Flex (£80) and the Garmin Vivofit (£99) and thankfully using it is not just restricted to Sony smartphones.

When it’s becoming difficult to stand out of the wearables crowd the SmartBand offers a refreshing approach, but many of its other features we have seen before on other trackers and overall feels like it’s still a work in progress. 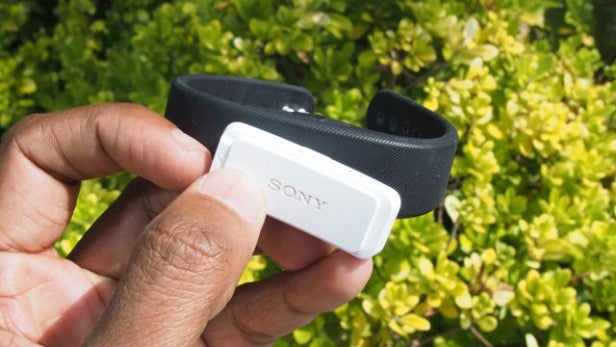 The SmartBand comes in a host of bright colours, though the matte black one we tried on is the most dull and ordinary looking. It does mean it’s more discreet to wear and that will appeal to some, but if you are after something that makes more of a fashion statement then the Nike Fuelband SE or the Jawbone UP24 definitely offer more sleek styling.

It’s made up of two parts much like the Fitbit Flex is with a rubbery plastic strap that comes in two different sizes in the box, so it should fit small and big wristed folk. Breaking up the simplistic strap is a silver clasp that secures it in place and while initially fidgety, it’s nice and easy to put on and remove. The slightly grooved surface on the outside of the band does mean it has a habit of picking up muck that can leave it looking a little grubby, though.

The ‘Core’, which is essentially a small white, pod-like module slips into the rubber strap and is the brains of the operation. There’s a single button to activate the different modes and a row of three white LED lights that shine through the casing to indicate the different modes. The Core’s surface is also NFC-enabled so you can tap your smartphone against it to make it easier to establish a connection. One of the most pleasing elements is Sony’s decision to include a built-in micro USB port to charge the SmartBand as it means there’s no need for a proprietary docking cradle. 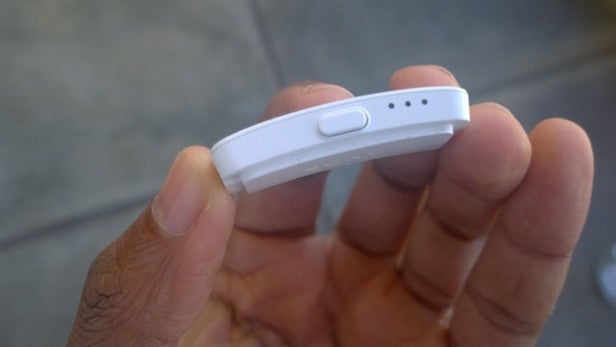 The strap and Core combined weigh just 21g and it’s one of the lightest and most comfortable trackers we’ve worn. There’s no sign of any irritation during the day or night. It even survives a sweaty run or a session in the gym and doesn’t feel sticky under the wrist. Vitally, it is IP58 certified waterproof and dustproof so you can wear it in the shower or go for a swim, reducing the chances of leaving it behind at home.

Like pretty much every other activity tracker on the market the SmartBand is about tracking movement and it does this via an accelerometer. There’s no GPS or any other motion sensors included, but that’s no real surprise when you consider how much it costs. What is slightly more disappointing is the lack of a screen, which means there’s a greater reliance on checking your smartphone to know how you are progressing during the day.

Like the Jawbone UP24 and the Fitbit trackers, Sony incorporates a vibration feature that can be used as a silent alarm in the morning, to alert you to incoming calls or notifications and tell you when your smartphone is out of range. These are smartwatch-like features we’ve seen before and it’s not bringing anything new to the party, but it would have been nice to seen the useful inactivity alarm functionality included in Jawbone’s activity trackers. 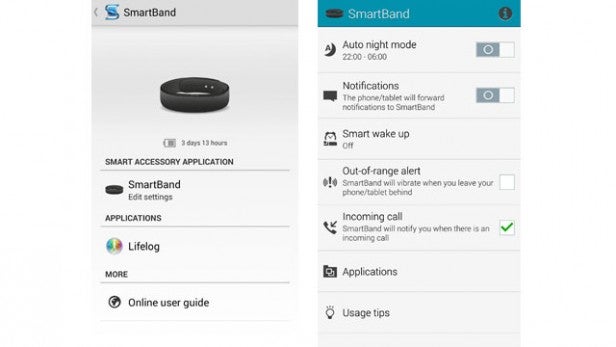 The primary function of the single button on the Core is to switch between day and night modes, but it can also be used with a handful of compatible smartphone applications. That includes using it as a remote for music playback, taking photos with the native camera app or an additional action camera and using it with Sony’s Find Phone locating software.

There’s varying degrees of success when the SmartBand is synced to the small group of apps. Testing it out with Google Play Music and Spotify it largely works as advertised. Nailing the triple tap to skip back a track can be tricky and jumping between apps requires re-configuring, so it’s not without problems, but it’s a nice little application of the SmartBand. Using it with the camera app, however, is not so straightforward and rarely worked for us. Similarly, Find Phone only works within 10 metres range so hardly feels that useful.

Next
Apps, Performance and Verdict Review