What is the Withings Pulse O2?

The Withings Pulse is the fitness tracker follow-up to the impressive Withings Pulse. Unlike its predecessor, the Pulse O2 can be worn around the wrist and after being the first to offer built-in heart rate measurement, it’s now the first to be able to monitor blood oxygen levels.

Priced at £99, it’s closest competitors are the £80 Fitbit Flex and the £99 Garmin Vivofit. For the money, it’s still one of the most feature packed trackers to own, but the wristband-look lacks finesse and there’s still issues from the original that still need addressing.

If you are hoping the Pulse O2 is a wrist worn tracker in the same mould of the Nike Fuelband SE or the Jawbone UP24, then pulling it out of the packaging is going to be something of a disappointment. It’s exactly the same tracker as the Pulse, which you can now slip into one of three watch straps. That means it’s still not waterproof or water-resistant, so swimming or even going in the shower with it is a no no.

There are three straps to choose from with a metallic cradle holding the tracker. It’s certainly not the most elegant attempt to combine tracker and watch strap we have seen compared to something like the Fitbit Flex and can’t help feel a little disappointed how it’s turned out.

Looking at the three straps, the designs are based on traditional watch straps. There are matte black and blue rubber options, which hug the arm but not in an entirely uncomfortable away. There’s a grooved pattern underneath to prevent the straps from sticking right against the skin and it’s extremely light to wear. Then there’s the leather strap. Genuine leather according to the marking inside the tanned strap, but you can’t help thinking it has come out of one of those watches you find in a machine at the arcade. 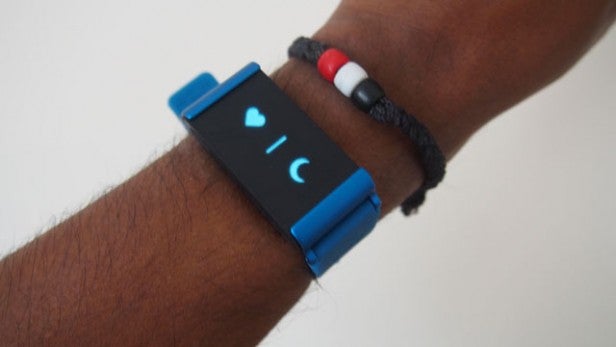 The cradle to hold the Pulse tracker and the buckle are made from black metal but it still makes it difficult to view it as anything but a very cheap-looking watch strap. Clearly the idea is to wear the leather one during the day and slip on the more durable one when you are going to the gym. Of the three, this looks by far the tackiest and you are better going with one of the rubber strap options.

All the same, we have few complaints when it comes to comfort. We’d be against wearing the leather one to bed for instance, but there’s little signs of irritation or discomfort. If you are wearing something alongside the Pulse O2, the tracker does have a habit of slipping a little out of the cradle. It has never fallen out and remains secure, but that didn’t stop us from worrying it might.

The tracker itself is identical to its predecessor with the same matte black chipped out of a Nokia Lumia look with a single navigation button, micro USB charging port and Opotoelectronics sensor on the back. There’s the same 128 x 32 OLED touch surface that responds to swipes and gentle presses.

It also means that it still has the same screen visibilty issues the original suffers from. Even with the smallest amount of bright light, it’s difficult to read and before making watch straps this is something Withings should have addressed. We found the screen responsiveness more temperamental this time as well and had to reset the tracker holding down the button for 15 seconds. Thankfully, it doesn’t wipe the data but the amount of times we had to do this was not ideal.

Alongside the tracker and watch straps, there’s the micro USB charging cable, but that can be substituted for a standard micro USB charging cable if it goes missing. There’s also a clip with a clamp-like grip to secure the tracker to the waistband on your trousers or shirt if you don’t want to wear it on the wrist. The velcro wristband for sleep-tracking has been ditched, but that’s not necessarily a major issue now that you can wear the Pulse O2 via one of the watch straps. 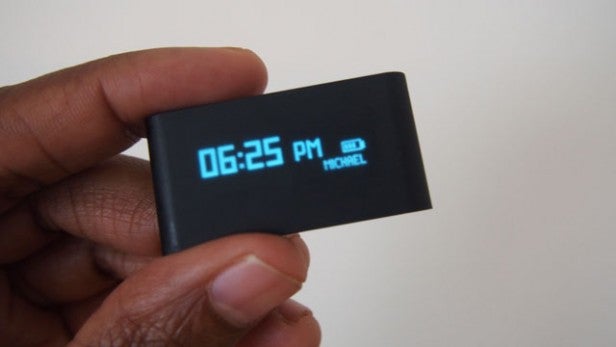 You can expect all of the same tracking functionality as the original Pulse. A MEMS 3-axis acclerometer, which is the same motion tech found in an iPhone 4, powers features like the pedometer and measuring distance for the run detection mode. There’s an altimeter to track elevation, the heart rate sensor in the back you don’t have to sit still to use like the Samsung Gear Fit or the Gear 2 smartwatch plus you can still monitor sleep. Data can still be fed from Withings Smart Body Analyzer or Withings Blood Pressure monitor to create a bigger outlook on your day-to-day life.

There’s still five displays to jump through, which include the time, step count, elevation, distance covered, calories burned, plus the screen to activate sleep tracking and heart rate measurements. You can still swipe through screens to view 14 days worth of data and unlike the Gear fit tracker, it does include the option to vertically display the time for a more traditional watch experience.

The latest addition is the ability to measure blood oxygen levels. The importance of keeping a check on blood oxygen levels is to make sure enough oxygen is getting through to muscles to function properly. This is particularly important if you do plenty of exercise. Climbers, for instance, can feel dizzy as a result of the lack of oxygen in the blood when at high altitude. When doctors perform this test they would commonly use a needle or an oximeter, which is closest to how the Pulse O2 performs the measurement by placing your finger on a light sensor that generates heart rate measurements.

Speaking to Withings and doing some research a percentage score of 95-100% is considered a good reading while anything lower is an indicator that you are probably not in the greatest shape. Staying fit helps maintain the right oxygen levels so you are not out of breath even when you are doing a mundane task like walking up a flight of stairs.