Much of what sets the SmartBand apart from the others is the concept of ‘life logging’ but before you get to that point you need to make sure you have the right phone to even use the SmartBand. The latest Xperia smartphones, like the Xperia Z2 and Z1 Compact, work fine, plus a select list of Android smartphones including the Nexus 5, Nexus 4, Samsung Galaxy S5 and the HTC One M8. The phone needs to be running on Android 4.4 KitKat or higher and requires Bluetooth 4.0, so that alienates plenty of other Android handsets and of course means iPhone and Windows Phone users are left out in the cold as well.

Once you’ve established whether your phone is even compatible, there are three apps to download. The SmartBand SWR10 application actually bakes itself into the Smart Connect app, so there’s no app icon created and combined helps create the connection between smartphone and SmartBand. The Smart Connect app is where you can configure settings for the SmartBand, like notification alerts or the native and third-party application support. It’s also the place to view battery life status. 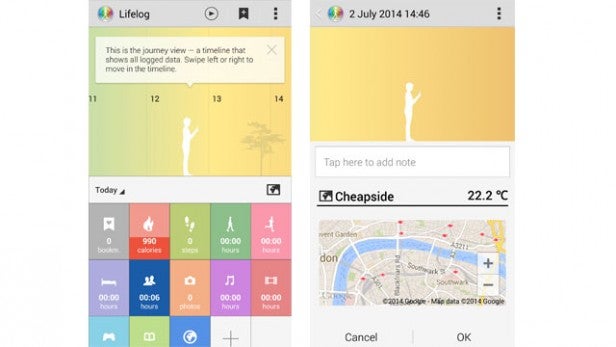 The most important app is Lifelog. Here you will be able to view all of your recorded data in a colourful, sylised interface. You’ll need an email account to sync with it and then you are good to go. What you are then presented with is a timeline and a series of boxes below totalling your score for the different activities the app can track.

There are 12 in total, which include calorie count, steps, walking, running, sleeping, communication (Twitter and Facebook), taking pictures, listening to music, watching video, playing games and reading books. In each section you can dig deeper to see more precise information like the specific apps you spent the time using and adjust daily goals for each activity.

But the focal point is the timeline, with a white figure holding a phone that shows all of your activities as they happen during the day and lets you scroll back and forth through the day to recap on what you’ve done. As well as tracking all of these activities you can also create a life bookmark. This is done by pressing down the button on the Smartband and this will record the activity. If it’s a place you’ve visited, it will record the location as long as you have the GPS turned on of course.

It’s definitely a refreshing and unique approach to store and display data, but quite how useful that information is and how it’s used to make improvements is not so clear. Some of the data is more interesting than others but there’s a distinct lack of analysis that makes it difficult to know what to do with the information. Yes, you spent two hours on Twitter but there’s no way of motivating you to curb that time refreshing your news feed.

Issues with the life logging persist when you put it into practice. We tried it with the Nexus 5 and the Samsung Galaxy S5 and there were two consistent problems across both smartphones.

One was with the data accuracy and the wrong activities being recorded. Step tracking works fine — the Jawbone UP24 and the Samsung Gear 2 Neo showed similar results — and the Sony SmartBand often records the wrong activity, like logging walking as running or simply not logging running at all. It’s the same for activities like
games where, it recorded opening and launching a non-gaming application
on several occasions.

Sleep tracking is no more comprehensive than what’s already on offer by other activity trackers, generating data on deep sleep, light sleep, and how long you were awake. This all depends on remembering to hit that button to switch into sleep mode as well. You can set up an auto sleep mode to turn on tracking between certain hours, but that’s highly unlikely to be useful for people who have very sporadic sleep patterns. 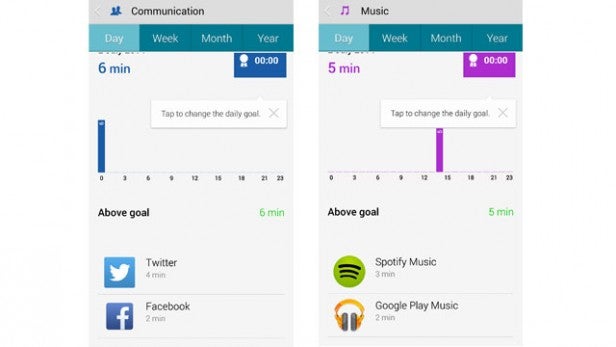 The second problem is there seems to be a lot of estimated calculations going on here and for users who demand accurate data, this all feels like a more playful approach. Logging moments as bookmarks as well just felt a bit superficial and the persistent notifications taking up space on our notification bar were annoying as well.

In terms of battery life, there’s a Lithium Polymer battery with a 35ma capacity, which will give you around 5 days of use. In our two weeks using it, it lives up to that and you will struggle to get much more than that. The good news is that it only takes one hour to get back to full power so you don’t have to wait long to get out and about with it. 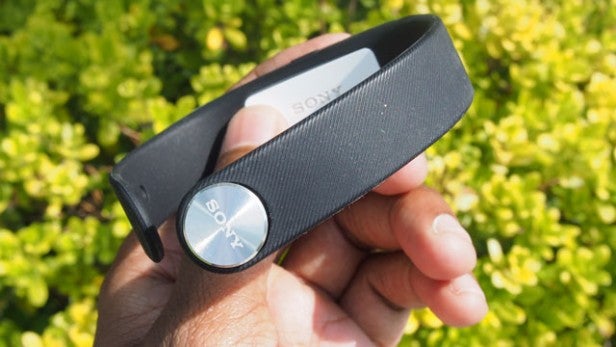 Should I buy the Sony SmartBand SWR10?

The Sony Smartband feels too much like a project that’s still in the works and has been rushed out to jump aboard the wearable bandwagon. There are some good ideas within Sony’s SmartBand ecosystem and the smartwatch-style features are nice additions, but the life logging concept is not really up to scratch, particularly because of the inaccuracies with tracking.

We like the idea of knowing how long you’ve spent on Facebook and Twitter or knowing how long you have been gaming, which are really nice metrics to be able to see. But the Sony SmartBand fails to use this data to add any valuable insight, which is where it really falls down.

In its current state, the SmartBand is tough to recommend simply because for the same money you can get an activity tracker with similar hardware and more meaningful data. The Fitbit Flex, the Jawbone UP24 or even the Misfit Shine are all better options. The second or even the third generation Sony SmartBand potentially could be great, but right now we would definitely give it a miss.

The Sony SmartBand has some good ideas, but it’s clearly a work in progress.