What is the Fitbit Flex?

The Fitbit Flex was one of Fitbit’s more entry-level fitness trackers, but has since been superseded by the new Fitbit Flex 2. This does mean that the original Flex can be had for around half the price it launched at, making it still a worthwhile consideration for those on a budget.

Since its launch, there’s been a move towards more discreet-looking trackers, so the newer Flex 2 can be worn more like an item of jewellery, similar to rival devices such as the Misfit Ray. The Flex lacks the waterproofing and more customisable design of its successor, but you’re still getting a more than capable tracker to keep an eye on your activity and sleep levels. 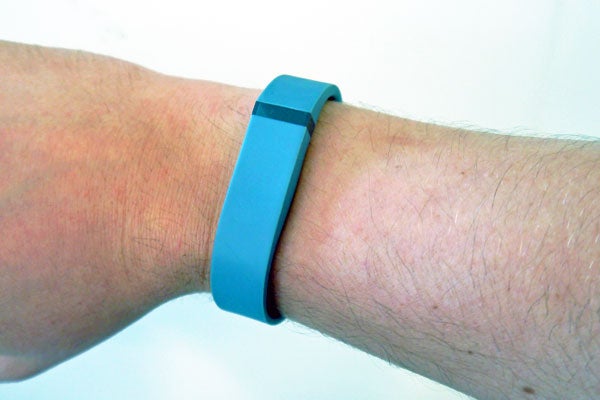 The Fitbit flex is a rubbery wristband, thinner than a watch and – if we’re honest – not as attractive as most either. It’s a pretty simple band with a push-in clasp strap that is the sort of thing you might expect to see opening lockers in a swimming pool changing room of the future.

It doesn’t quite have the style of the Jawbone Up for Nike Fuelband, and we found it a little tricky to get the thing attached to your wrist.

In plainer terms, though, the Fitbit Flex hardware performs just fine. It’s light, inoffensive-looking enough (in a sort-of parole band fashion) and practical. The brain of the Flex isn’t built into the rubbery band but just lives within a slightly-reinforced part of it – roughly where the face of a watch would lie.

This lets you replace the strap, should the rubber start to deteriorate, and makes buying different-coloured straps easy. You can currently get the Fitbit Flex in five colours. With near-compete water resistance, you can more or less live with the thing on including in the shower. 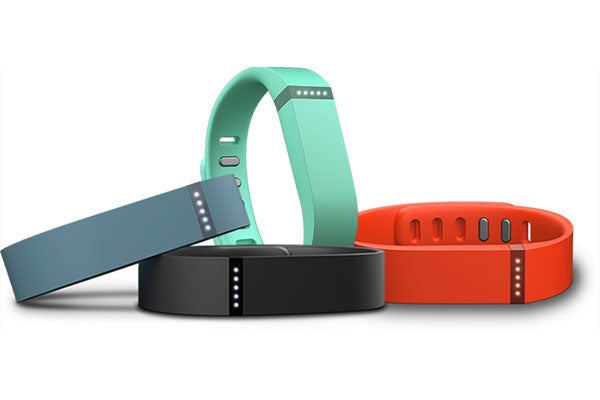 The Flex brain lives in this ‘watch’ position so that the tiny display of the Fitbit Flex can shine through a little translucent window in the strap. It’s not a full display, though, but five little white lights that, primarily at least, tell you how far you are to achieving your daily goal.

This is one of the most important differences between the Flex and the Fitbit One. Fitbit’s other trackers have displays that show you the number of steps you’ve taken in that day, and how much distance they add up to. The Fitbit Flex doesn’t.

To get the most out of a Fitbit Flex, you’ll need to hook it up to a phone with Bluetooth 4.0. The compatibility list of phones and tablets is pretty short, but includes favourites like the iPhone 4S, iPhone 5 and Samsung Galaxy S4. There are only Samsung and Apple devices on the official list at present. 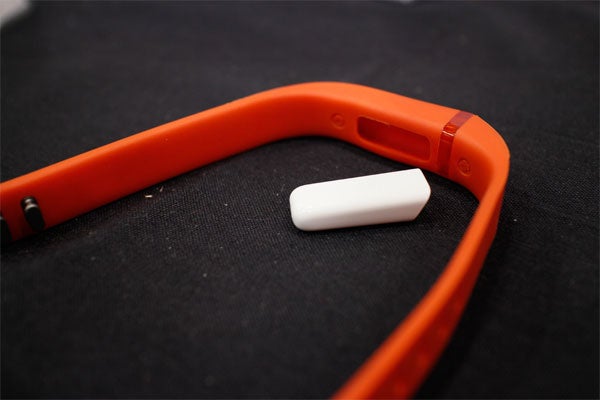 Bluetooth 4.0 lets the Fitbit Flex send data to these devices while hardly consuming any power compared to previous Bluetooth versions. It also uses Bluetooth to transfer data to a computer, should you not want to use a phone. The Flex comes with a small dongle that plugs into your computer/laptop, automatically syncing data whenever the fitness tracker comes into range. 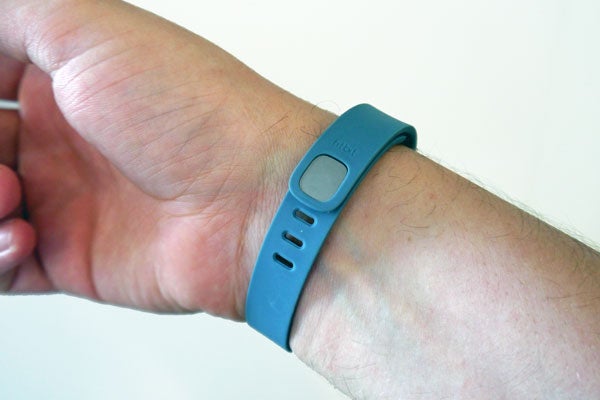 The relatively low power consumption means the Fitbit Flex can last 4-5 days off a charge, after which you’ll have to plug it into a computer for a juice-up. A little USB charging cradle is included.

This is around the same stamina as the quoted figures for the Nike Fuelband, which has a more dazzling, feature-rich display. It does feel as though Fitbit scrimped on battery in order to make the central unit such a teeny little nugget.

The Fitbit Flex also lacks an altimeter, found in the Fitbit One – which sells at the same price. An altimeter in a fitness tracker counts the flights of stairs you walk up, giving an extra level of fidelity to the tracking. It was also one of the more fun elements of that tracker – the Flex is just about steps.

The Fitbit Flex is also not quite as accurate as a tracker designed to be clipped to clothing – common to all wrist fitness trackers.

Just think about it – how much do you move your arms, and how would you zone-out movement that was mere flailing? And what about compensation for motion when your arm was holding a bag strap, therefore not moving much?

The Fitbit Flex can’t compensate for everything, but it does seem to use some form of cadence algorithm than attempts to block-out random movement.

It’s never going to be as accurate as the Fitbit One, but it is at least consistent, and able to give you a good idea of your activity relative to your norm. 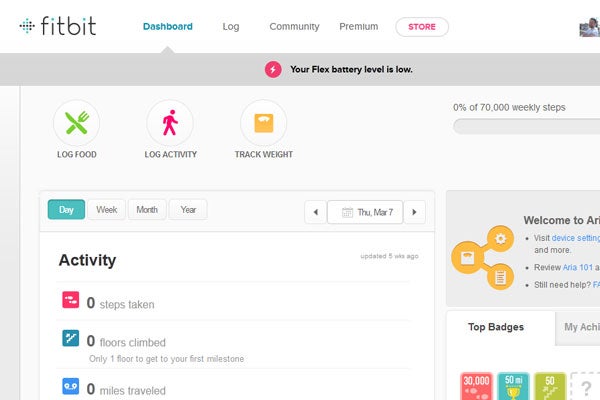 The Fitbit web Dashboard, on a particularly lazy day

The Fitbit dashboard also keeps a longer-term record of your activity. Using the Fitbit app, or the browser dashboard, you can also log your food, although that’s a whole new level of dedication that won’t sit well with the breezy Fitbit style – which demands no effort other than the occasional charge.

The Fitbit Flex will also track your movements while you’re asleep – a separate mode that’s accessed with a series of taps on the tracker (it can sense this movement thanks to its accelerometer). There’s also a tiny motor in the Flex that lets it vibrate, acting as a discreet alarm clock. You can’t set the alarm’s time from the tracker itself, though – this has to be done from the mobile app or the Fitbit.

Should I buy the Fitbit Flex?

It may be more in-sync with fitness gadget trends than previous Fitbit trackers, but the Fitbit Flex is the most basic one the company has released in a while. It doesn’t have a full display, or a stair-counting altimeter and just isn’t as fun to use.

It is cheaper than either the Nike Fuelband or the Jawbone Up, but if you’re not bothered about the watch-like form, we’d recommend checking out either the Fitbit One or the Withings Pulse. The One is more feature-rich, as is the Pulse – and both are more accurate and a good deal more fun to use on their own.

The Fitbit Flex is the first wrist fitness tracker from the maker of the Fitbit Ultra. It’s reasonably-priced, pretty convenient to slot into your life and is water resistant. However, it lacks some key features compared with Fitbit’s other trackers and not as stylish looking as its wrist-bound rivals.